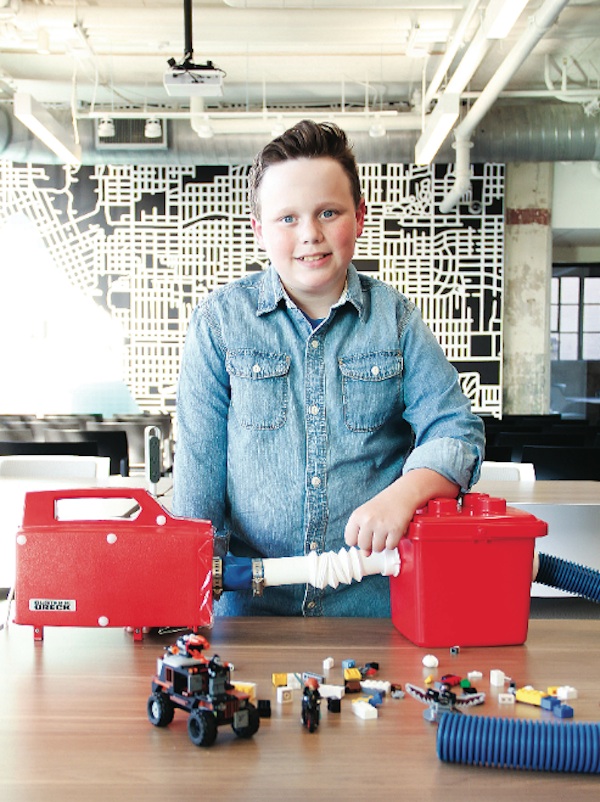 In December 2015 Tulsa Community College and the Lobeck Taylor Family Foundation launched the Tulsa StartUp Series, a competition to help entrepreneurs innovate and accelerate their businesses with the focus on delivering resources and mentoring opportunities to entrepreneurs. This year, for the first time, kids in kindergarten through 12th grade were invited to pitch their ideas and inventions to a panel of judges. The student entrepreneurs were vying for a prize that included $2500 dollars, a three-month membership to 36 Degrees North, a spot in the Venture Assessment Program at i2E and a mentor to help further develop the project. Ten-year-old Gabe Dougherty was named the winner out of six finalists with his Lego Vacuum. Gabe is a fourth grader at Lee Elementary School in Tulsa.

TK: How did you hear about the Tulsa Startup Series?

Gabe: We had been talking about getting the Lego Vacuum off the ground for quite some time. My mom saw the Tulsa StartUp Series on Facebook and she told my dad and my dad told me. At first I was nervous about the contest, but then we talked about it as a family, and I got very excited.

TK: How many other kids were a part of the competition?

Gabe: Twenty-one entered the pitch competition and six finalists were selected to compete live for the grand prize. The competition was strong.  I was surprised and very excited when I won.

TK: Can you tell me what other invention there stuck out to you?

Gabe: Clip-on cleats. I love sports and thought it was a good idea because it would help parents get their kids cleats without having to pay more money.

TK: Explain your invention and its uses.

Gabe: My invention vacuums up Legos off the floor and places them in a bin so people won’t step on Legos and your room won’t be cluttered. My parents were always telling me to clean my room and it took forever to get all the Legos picked up. The Lego Vacuum is much faster than picking them up by hand and it’s fun to use. My slogan is “The Lego Vacuum; it gets the Legos off your floor and your parents off your back.”

TK: How did you first come up with it?

Gabe: We had an invention fair in Mrs. Foshee’s second-grade class. We had to make an invention to make the world a better place.  My dad and I were brainstorming one night and he asked, “What’s your biggest problem?” and I responded, “The Legos on my floor.”  Then I said, “I know! I’ll build a Lego vacuum!” We built three prototypes and this was the one that worked. I presented it to my school and was awarded the “Student Favorite” and “Most Scientific” awards.

TK: Do you have any other ideas in the works?

Gabe: Yes, I do not want to be a one-hit wonder! I have an idea for The Pupper Sucker. It is an invention to get dog poop off the ground so you don’t get it on your shoes, and it won’t smell.

TK: Other than inventing, what do you like to do in your free time?

Gabe: Playing basketball, reading, video games, Scouting, and of course, playing Legos!  I have over 60 Lego sets and also make my own creations.

TK: What are your plans moving forward?

Gabe: I plan to license my product to Lego to manufacture and sell. Additionally, I will create a new prototype as well as a non-Lego version to clean up small toys and craft supplies such as beads. I also hired a patent attorney to get a patent for my product.

I am in the process of launching my own website, www.legovacuum.com, which will promote my business and product. The website will be fun for kids as it will include contests and games.

I am thankful to the Tulsa StartUp Series for giving me new opportunities to pursue my invention.