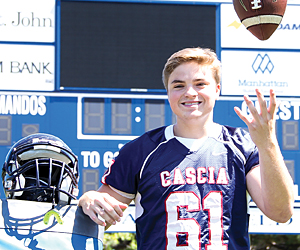 Fall Friday nights under the football stadium lights is where Cascia Hall Senior Chad Rhodes comes to life. He and fellow Cascia football seniors are facing their final high school season on the gridiron and are motivated to make it a winning season. Chad understands the proud legacy of Cascia football, having watched a cousin and older brother help lead Cascia to state championships. While participating on a high school football team requires daily practice, Chad makes academics a priority and plans to pursue an engineering degree at the University of Oklahoma after he graduates.

TK: How long have you been participating in football and how does your current position on the team fit your athletic style?

Chad: My first year of tackle football was 3rd grade, but I had played flag football the year before. I went to Monte Cassino for elementary school, so I played for their youth program in the Indian Nations Football Conference (INFC) until I went to Cascia in 6th grade. Almost all of my current senior teammates played on my team or on our rival team in the INFC, so I’ve basically been playing with the same guys for almost 10 years. Currently, I play offensive guard and defensive end. Last year, I played mostly just offensive guard. Offensive guard for our offense involves a lot of pulling and kick-out blocks, so being quick and strong at this position is very vital. Same goes for playing the defensive end position.

TK: As a senior what is your leadership role on the team?

Chad: I think the most important role of being a senior leader is motivating the younger talent. To go far in the playoffs, you can’t just rely entirely on your senior class to make big plays. Young guys have got to step up and it’s our job as seniors to motivate them to work hard at practice and workouts. Another role as a senior is to set examples for the younger class so they can be leaders when they’re seniors. The previous senior classes have done a good job at that and have demonstrated to our senior class how to be good leaders.

TK: What is the most important advice you can offer a freshmen football player on your team?

Chad: The most important advice I can offer the freshmen class is to stay on your toes and work hard at all times. You may think you’re not a big part of the team yet, but you never know when players are going to go down from injury and your name will be called to go in on a Friday night in a big game. You should expect to be competing for a varsity spot, even as a freshman. Stay focused all year round starting from your freshman year. Even if practices and workouts seem to get repetitive, it’s still very worth it to keep going strong because when it is your turn to go out and play consistently on a Friday night, it is one of the most fun, exhilarating things you’ll ever do, and you don’t want to have any regrets when it’s all done.

TK: Do you have any game-day rituals?

Chad: For pregame, I’d pull up an episode from the TV series “Friday Night Lights” by Netflix on my phone and watch it, or watch some more film of our opponents on my phone and discuss it with my teammates. Last season, we had many long bus rides to get to far away games, and those were the most enjoyable because it was a time to relax, think about the game, and be social with your teammates.

TK: How do you juggle the demands of football and your classwork?

Chad: Balancing my schedule with school and football is a hassle, no doubt, but I usually keep on a good pace. On a normal school day, we usually get off of practice at about 5:30 p.m., and then I go home, shower, eat dinner, then take a quick nap before I start doing homework.

TK: Cascia has a long legacy of a strong competitive football program.  How will you and your teammates work together this season to continue that legacy?

Chad: Our seniors are very motivated to keep the Cascia powerhouse tradition going. Our class grew up physically and mentally as juniors whenever a lot of us had to start and play big roles with absolutely no previous varsity experience because of a very small senior class. We had no idea what to expect. Last season, people doubted the program, whether it would keep thriving or if it would start to decline due to the loss of talent from a previous senior class, but we kept it thriving by only losing one regular season game with a very young, inexperienced team.

This year, with a large, very experienced senior class, we know what to expect. We aren’t an immature and inexperienced team any more. We had numerous ups and downs last season, and it seemed like we were too young as a team to know how to handle those ups and downs. Now we’ve learned how, and we realize that we’ve got to bring it every Friday night and stay focused all week in practice, film, and weights so an early playoff loss will not happen again. We’ve matured a tremendous amount compared to last season, and we are ready to take on the challenges and meet our goals this season has to bring. This summer has had its hardships outside of football that have really brought our senior class together to be stronger than ever, and we cannot wait to get this season going and to be a lot better team than last year and strive for the Gold Ball.