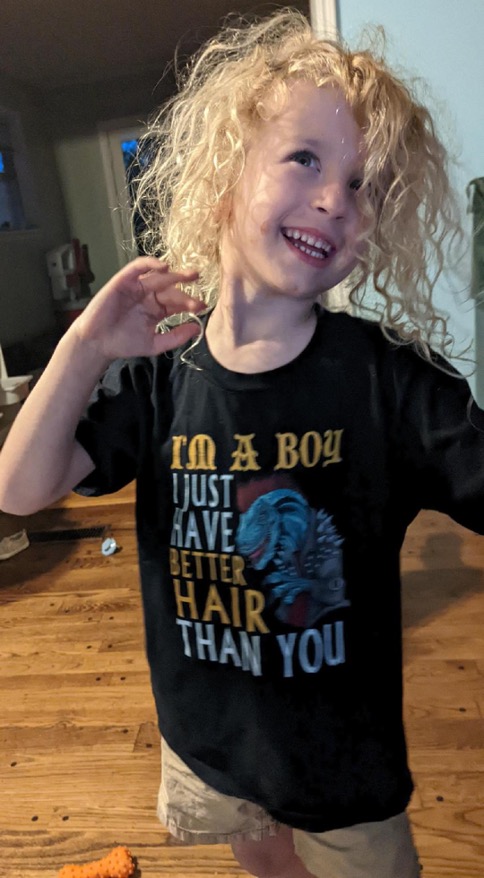 I love this shirt!

My grandson has a shirt that says, “I’m a boy. I just have better hair than you.” It’s appropriate because he has great hair and is constantly mistaken for a girl. Not that there is anything wrong with that. I’m happy to report that he doesn’t view being called a girl as an insult. Callister says he plans to cut his hair when he turns five. His birthday is in the middle of June, so I thought I better write this blog quickly before the “Fabio”-style golden locks are shorn. 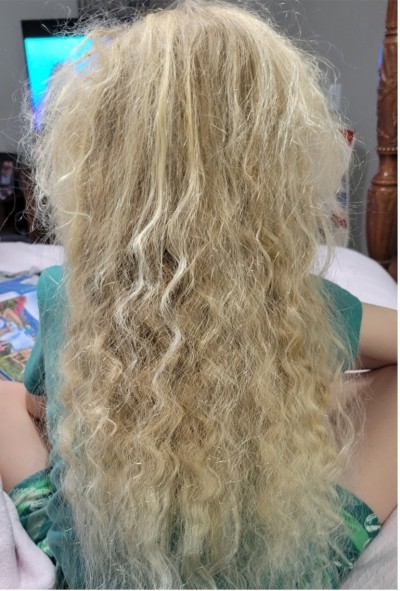 A rare occasion when I managed to brush it all out.

He’s my grandchild, not my child, so I don’t have any say in the matter, but I do have an opinion. I love his hair! It’s blonde, it’s beautiful, and it’s curly, especially on humid days. I was a teenager in the 1970s, and many of the boys I dated had long, shaggy hair. I was a big fan of that style. Inside my delusional mind, I’m still a teenager, and it’s still the 1970s. I think long hair looks great on boys and most men. If in doubt, take a look at Jason Momoa. Can you imagine Aquaman without the beautiful, long locks? I know I’m not the only one who loves long hair on males. There is an Instagram group called longhairstylemen that has 149,000 followers!

Maybe this wasn’t a good example? He would look good bald.

The only negative aspect of Callister’s long hair is how difficult it is to wash and brush. Having short hair would drastically cut the time spent on hair care. Once again, I’m the grandparent, not the parent, so that’s not really my problem. Callister usually wears his hair in a ponytail or a braid, but it’s so wild and curly that it often breaks free of constraints, creating a halo of curls around his face.

The reaction we get in public is mixed. Some people seem to love his hair and make complimentary remarks. Upon finding out he’s a boy, others respond with judgmental statements and questions about when he is going to cut his hair. His parents have decided he can choose when he cuts his hair. It is his hair, and it is only hair, right? Or is it more?

Could it be that the people who object to boys and men having long hair still prescribe to strict gender norms? Some popular ones are about girls having long hair and boys having short hair, but the rigid gender stereotypes sometime extend to toys and careers. I cringe when I see an aisle in toy stores or Big Box stores that denotes “boy toys” or “girl toys.” I’m not denying that maybe boys are drawn to trucks more often, and it might be girls who are more likely to love baby dolls, but that should be their decision, not a prescribed idea.

After a classmate told my grandson that pink is for girls and blue is for boys, it took a lot of talking to convince him there is no such thing as girl colors and boy colors. There are no “male jobs” or “female jobs.” We’ve progressed far from that, with over fifty percent of medical students being female. No one even blinks (at least not most people) when encountering a female police officer or a male nurse. There are stay-at-home dads (my grandchildren have one!), and we have a female Vice President for the first time in history.

I hope that my grandchildren will be coming of age in a world that is free of gender norms. But maybe I’m making the entire issue of my grandson having long hair way too complicated. He’s a four-year-old boy with long, golden curls that are beautiful. Cutting it will be his choice, and despite my obvious preferences, I won’t try to influence him. I’ll keep my opinion to myself (he can’t read well enough yet to read this blog), but I will shed a few tears when I see that beautiful hair on the barber’s floor. He’s a boy, but he has great hair! 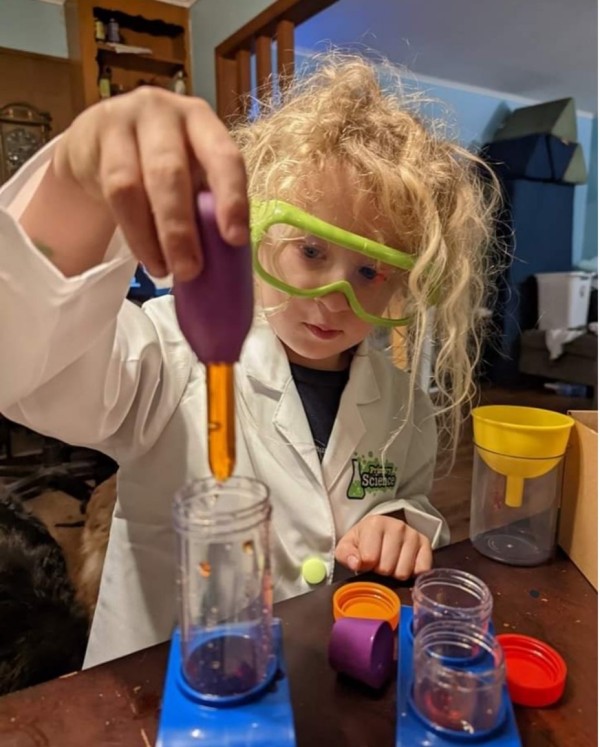 Callister’s “mad scientist” look won’t be the same without the wild hair! 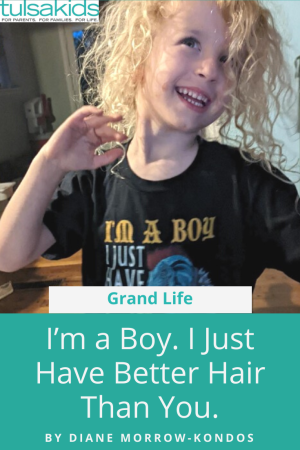