This title sounds like it was ripped from the headlines of the National Enquirer, not so different than “I Was Abducted by Aliens” tabloid ilk. But it’s true; I did change my baby’s name! People are surprised when I tell them my daughter was born with a different name, but it all seems perfectly reasonable to me.

When I was pregnant with our first daughter, there was no hesitation on names. We knew we wanted her name to be Alexandra Elizabeth. At the time, we were living in a small town in North Carolina, and most people didn’t hold back on their opinion of our newborn’s name. The recurring theme seemed to be that it was too big of a name for such a tiny baby. I tried to explain that the percentage of time she would spend as a baby was nothing compared to the years she would spend as a grown woman. I wanted her to have a strong name that would transition to adulthood easily.

When Alexandra was six months old, I became pregnant with her little sister. Yes, you read that right – six months. Even more shocking, the pregnancy was planned. This time around, the name didn’t magically appear out of nowhere. I made lists, asked friends, and skimmed through the baby names books, but made no progress in deciding on a name. I suspect my husband (at the time) was so overwhelmed he couldn’t fit another thought into his already overloaded brain, so it wasn’t a subject we discussed very often.

My second pregnancy was a busy time. We set up a second nursery, made birth plans, and tried to remember why we thought having babies fifteen months apart was a brilliant idea. I was also busy trying to take care of the baby we already had in between running to the bathroom to throw up. I’m not very good at being pregnant. So somehow, the nine months went by with no plan for a name. I showed up for my planned cesarean section with potential baby names swirling in my brain.

The surgery was a little longer than usual because I also had a tubal ligation at the same time. The effects of the more extended surgery were uncontrollable shaking and chills. So when my husband brought our newborn baby into the recovery room with the announcement that he and my mother thought the baby looked like a Jennifer Diane, I readily agreed. Jennifer was one of the names I had considered, with the intention of calling her Jenna.

Five days later, I left the hospital, unaware I wouldn’t sleep again for several years and not knowing Jenna wouldn’t be named Jenna for long. Having two kids spaced so close wasn’t easy, a gross understatement. Jenna had constant ear infections, projectile vomiting, and couldn’t sleep without being held. It was a rough few months. With everything going on, there was also an uncomfortable feeling when I said my baby’s name. Jenna just wasn’t right. I tried to quiet the doubt in my brain, but it was always there. My heart told me her name was Caroline, NOT Jenna. Now, I realize that sounds pretty hippy-dippy, but the feeling was undeniable.

Fortunately, my husband agreed, and we started the paperwork to change her name legally. It wasn’t complicated, and it wasn’t too expensive. We decided to change her middle name to Caroline even though we knew we would use Caroline. That was a mistake that I guess I’ll blame on hormones. I knew that at four months, she was already used to the sound of her name. I couldn’t change it abruptly. Her big sister, Alexandra, was also used to calling her little sister by the name Jenna. I eased into the new name by calling her Jenna Caroline for a couple of months, and then occasionally, I started dropping the Jenna and just saying Caroline. The transition process took several months before we called her Caroline almost exclusively, only sometimes adding Jenna on front.

I’m usually met with shocked responses when I tell people I changed my baby’s name. Caroline is now a grown woman and is so happy that I changed her name. Anyone that knows her can attest to the fact she is a Caroline, not a Jenna. The name Caroline suits her well. It also sounds better when used in conjunction with her sister’s name. Alexandra and Caroline seem to go together in a way Alexandra and Jenna just didn’t fit. A mother’s instinct is usually correct. I’m glad I trusted my gut and made the right choice, even if saying I changed my baby’s name has a tabloid ring. I have no regrets, and neither does my Sweet Caroline! 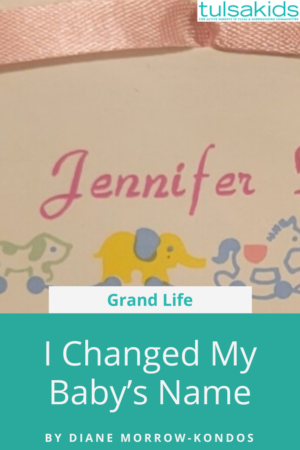