How to Make Potica

While the rest of you were out celebrating the holidays, drinking wine, eating, visiting with friends on Friday night, I was at home trying my hand at making my first potica. My husband was at a gathering and I begged off, feeling a need to knead some dough. As promised in my last blog, I gathered my courage and spent five hours mixing dough, crushing walnuts, rolling dough (well, you get the idea) to create that Croatian, must-have Christmas treat. It would not be Christmas in my family without it. Many family members have tried, failed or partially succeeded in baking a perfect potica, which, to me, is like my grandma’s – very thin dough that barely separates the spiral of filling.

Let me tell you, it isn’t easy. I can see why it’s only made once a year. The dough is a sweet, yeasty, buttery, egg-yolky concoction. First mistake – next year (should I be brave enough to do it again), I will get a bigger bowl for the dough because it tried to grow out onto the counter as it was rising.

The two pounds (yes, two pounds) of walnuts that I crushed in the food processor for the filling made me wonder how my grandma did that. She had no kitchen gadgets, so she must have ground them all up by hand. She also didn’t use a recipe. How did people do it in the olden days before food processors, blenders and bread-kneading hooks? And, I think Grandma probably weighed about 97 pounds, so wrestling all that dough must not have been easy.

(By the way, as you may have guessed, Grandma Selakovich was an amazing cook.)

After the dough doubled in size, I wrangled it up (I swear it was breathing and fighting me) and dumped it onto the dining room table that I had covered with parchment paper. The dining room table is the only place large enough to roll the dough that is approximately 50” x 34”. I love to cook, but I don’t bake much, so my rolling pin leaves a lot to be desired. It’s wooden, not very heavy and is missing the handles. (I know. I need a new one). My grandpa Selakovich made my grandma’s rolling pin. I think of her rolling out her dough, and it makes me determined to get mine paper thin like she did. Believe me, I wanted to give up several times, but Grandma would have kept patiently rolling. So, I struggled away, switching sides of the table to reach all parts of the dough. Second mistake – leaving ragged edges. Since I had some dangling pieces jutting out of my dough rectangle like the panhandle of Florida, my potica didn’t roll up evenly. But that was okay. I just made some really small ones that my husband and I ate the next morning for breakfast.

After mixing the melted butter, sugar, honey and walnuts together, you have to beat egg whites to stiff peaks and fold them in. Again, I wonder if my grandma’s recipe had egg whites. I think it did. Surely she had a hand mixer.

Spreading the filling over the dough and rolling (and rolling) it up was probably the easiest part. I cut the long tube into loaf-sized lengths and tucked them into five pans – the recipe definitely makes enough to share with friends! After that, back in the kitchen to rise again and into the oven.

After that, I sat down to rest, hoping not to fall asleep and let my loaves burn. 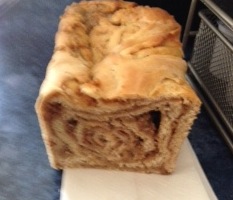 I took a picture of the results. It tastes pretty close to the real deal! I was so excited and expected a little more enthusiasm from my husband. He said, “Haven’t you made poticabefore?” No, no I haven’t. Thank you for being so observant. The potica that appears every Christmas from years’ past has come from my mom or my grandma. My grandma Selakovich has been gone for many years, and my dad, her son, is also gone. Now that my mom has turned to ordering hers from a place in Kansas City, I feel like it’s my turn to step up and make the annual potica.

Was it a lot of work? Yes. Was it worth it? Yes. Not because I now have a delicious treat to share with friends and family. That’s good. But during those five hours last Friday night, in the quiet of my house, I thought of Grandma Selakovich, and I thought of my dad, and how much I loved them.