Once upon a time, being a kid was simple and meant playing dress-up, playing baseball in the backyard or spending lazy summer afternoons splashing around the neighborhood pool with friends.

Nowadays, kids are more likely to spend the summer playing with sexy Bratz dolls who mix drinks for their Bratz boyfriends or watching Lizzy McGuire sneak into an R-rated movie. Prepubescent girls are facing increasing pressure from the media and manufacturers to look and act in ways that are far beyond their years or ability to comprehend what that behavior means.

More than ever, movies, music, TV shows and Internet sites are placing emphasis on appearance and sex appeal and gearing it toward an audience that, according to many experts, isn’t ready for such provocative messages.

“Marketers are trying to expand their market by selling teen items to younger and younger girls,” said Sharon Lamb, Ed.D., in an email interview. Dr. Lamb is a professor of psychology at Saint Michael’s College and author of the book Packaging Girlhood: Rescuing Our Daughters from Marketers’ Schemes.

The trend has experts concerned that kids are maturing quicker than previous generations and are being unduly influenced to grow up too fast when they’re not physically or emotionally ready.

“Kids have a lot more pressure these days to be grown up before they are ready,” said Claudia Arthrell, ACSW, LCSW, director of professional services at Family & Children’s Services in Tulsa. “They’re acting provocatively and that depends a lot on the TV shows they watch and what they are allowed to listen to.” 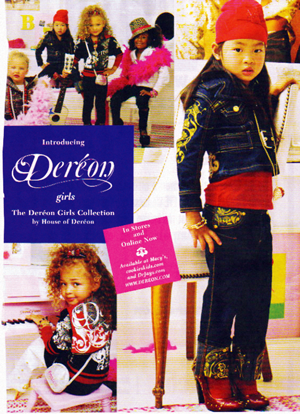 In February 2007, the American Psychological Association released a 72-page report, co-authored by Dr. Lamb, in which researchers found evidence that the sexualization of young girls by the media and merchandisers is detrimental to their mental and physical health.

Sexualization, as defined by the APA, occurs when a person’s value comes only from his or her sexual appeal or behavior, to the exclusion of other characteristics; when a person is held to a standard that equates physical attractiveness with being sexy; when a person is sexually objectified rather than seen as a person with the capacity for independent action and decision making; or when sexuality is inappropriately imposed upon a person.

“When little girls understand that girlhood is about partying, looking sexy for boys and dancing to MTV videos,” said Dr. Lamb, “they lose an essential part of childhood that is about play and expanding their horizons.”

Such emphasis on sex appeal and looks can lead to serious problems such as body-image issues, eating disorders, school-performance difficulties and depression, according to the APA report.

One recent example of sexualization of children that has sparked controversy among child health experts and parents is singer Beyonce’s newly released House of Dereon line of children’s clothing. Concerns have been raised over not only the very grown-up style of the clothes, but also the racy content of the ads designed to sell them. In the print ads, several kindergarten-age models are pictured heavily made up, wearing spiky, high-heeled shoes and posing in suggestive ways.

The ads are just one aspect of a culture that more and more promotes the idea that emulating celebrities and looking “hot” or “sexy” is the key to achieving popularity and prestige. Dr. Lamb wrote that the message that young girls take away from provocative advertising and merchandise is that “girls are sex objects for boys and that is the primary way they’re valued in this society.”

When faced with that kind of pressure, some kids end up making the wrong choices because they want to fit in with others their age rather than be ridiculed.

Fifth-grader Megan Inbody, 11, says kids her age really aren’t into acting grown-up yet, but there are some fads that are more popular with her peers and less so with their parents.

“You have to stay on top of everything – who they’re talking to, what they wear, what’s in the media – or you can lose control,” Inbody said, adding that she encourages her kids to be independent and make their own choices, but at the same time know what kind of behavior is appropriate or not in their family.

At the Inbody home, the family computer is kept in the kitchen where Elizabeth and her husband, Brian, can keep tabs on their kids’ Internet use. Checking the computer’s Internet history and always knowing whom their children are speaking with online helps the Inbodys make sure the kids are not venturing onto sites that contain inappropriate material or talking with strangers.

”There’s a fine line between what’s acceptable and what’s not,” Inbody said. “You don’t want to be totally keeping your kids from what their friends are doing because that will alienate them, but at the same time they need to know there are consequences if they break that trust.”

Keeping tabs on kids and monitoring activities such as Internet use is an excellent way to help them make positive choices, Arthrell said. Setting boundaries and timing family discussions to address specific issues such as dressing a certain way or watching certain television programs also is important in getting kids to understand what’s acceptable for someone their age.

“Parents really have to look at these things and ask ‘do we buy into it or not?” Arthrell said. “When you teach your kids about what is considered appropriate and inappropriate, the key is to do it in the present. If you see something on a TV show or on the street, those are good times to bring up discussion.”

Talking to children about what they see and discussing your values with them does pay off. Dr. Lamb described this positive story from one of the girls she interviewed while researching her book. In her email, she explained, “One of the girls in Massachusetts held a ‘Girlcott’ against Abercrombie and Fitch, asking them to remove offensive T-shirts from their shelves – T-shirts that said, ‘Who Needs a Brain When You Have These?’ across the chest.”

So what else can moms and dads do to ensure their children make healthy choices and are not as likely to engage in age-inappropriate behavior? The American Psychological Association offers the following guidelines:

Tune in and Talk.

Watch TV and movies with your daughters and sons. Read their magazines. Surf their Web sites. Ask questions. “Why is there so much pressure on girls to look a certain way?” “What do you like most about the girls you want to spend time with?” “Do these qualities matter more than how they look?” Really listen to what your kids tell you.

Girls who are overly concerned about their appearance often have difficulty focusing on other things. Clothes can be part of the distraction. If your daughter wants to wear something you consider too sexy, ask what she likes about the outfit. Ask if there’s anything she doesn’t like about it. Explain how clothes that require lots of checking and adjusting might keep her from focusing on school work, friends, and other activities.

If you don’t like a TV show, CD, video, pair of jeans, or doll, say why. A conversation with your child will be more effective than simply saying, “No, you can’t buy it or watch it.” Support campaigns, companies, and products that promote positive images. Complain to manufacturers, advertisers, television and movie producers, and retail stores when products sexualize girls.

Young people often feel pressure to watch popular TV shows, listen to music their friends like, and conform to certain styles of dress. Help your children make wise choices among the trendy alternatives. Remind them often that who they are and what they can accomplish are far more important than how they look.

Athletics and other extracurricular activities emphasize talents, skills, and abilities over physical appearance. Encourage children to follow their interests and get involved in a sport or other activity.

You may feel uncomfortable discussing sexuality with your kids, but it’s important. Talk about when you think sex is OK as part of a healthy, intimate, mature relationship. Ask why girls often try so hard to look and act sexy. Effective sex education programs discuss media, peer, and cultural influences on sexual behaviors and decisions, how to make safe choices, and what makes healthy relationships. Find out what your school teaches.

Help your kids focus on what’s really important: what they think, feel, and value. Help them build strengths that will allow them to achieve their goals and develop into healthy adults. Remind your children that everyone’s unique and that it’s wrong to judge people by their appearance.

Marketing and the media also influence adults. When you think about what you buy and watch, you teach your sons and daughters to do so, too.

According to the American Psychological Association (APA), Research evidence shows that the sexualization of girls negatively affects girls and young women across a variety of health domains:

Growing Up on Tour

A conversation with a kid traveling with a national touring company.

Helping Your Children Understand Themselves

Through The Book "The Treasure Tree"