It’s no secret that Team Coffee Nebula loves cowboy fun from equine experiences at cowboy campouts to ranch retreats at New Life Ranch Frontier Cove. Last year, we had a blast stopping by the National Cowboy & Western Heritage Museum located in OKC. Tara and Joss of Spaghetti on the Wall also visited in 2019 and blogged about updates to the museum, and we just had to check it out for ourselves since we had so much fun the last time we were in town.

When we found ourselves back around those parts to visit Frontier City a couple of weeks back, we decided to stop back over and check out all of the cool changes for ourselves. 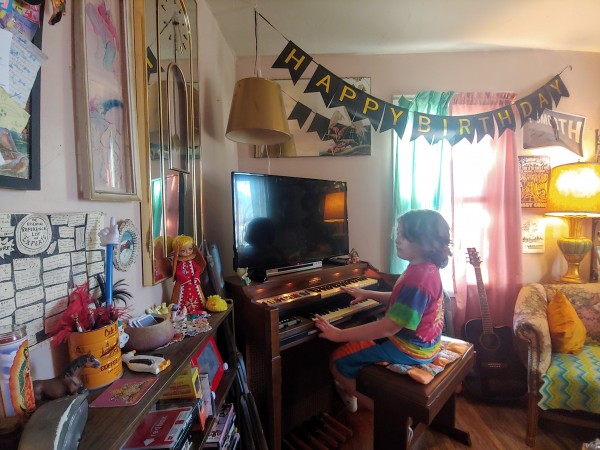 But before I get into all that, I need to tell you all about a magical little secret we found called Gramma’s RoundAbout. We found this awesomely kooky place on Airbnb a few months back when we were originally planning to go to Frontier City for Arthur’s 12th birthday way back in the Before Times. 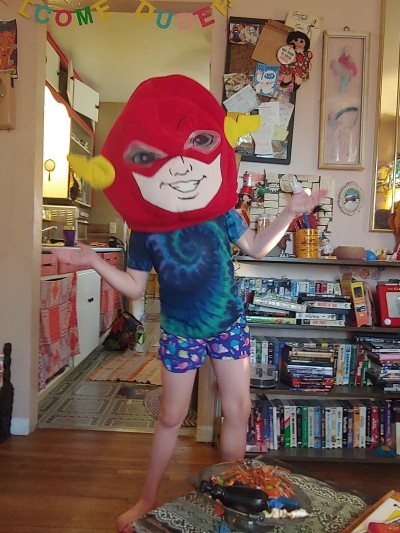 This house is a wacky kitsch-filled haven that’s packed to the gills with interesting things to see and interact with from the groovy old organ to random toys, art supplies, and loads of VHS tapes. We had a blast going through and looking at everything there was to see. The house comes with an optional house cat, Rokus in every room, and a well-stocked kitchen. Local artists use it as a communal space, and I believe the vintage goodies in the home are actually available for sale.

Suffice it to say, our whimsically-minded tweens had no trouble staying occupied without their devices in front of them while we were there, and they were eager to add their own art to the collection before we left. If you love the idea of staying in a fun living art space, be sure to check this out when you’re in OKC. 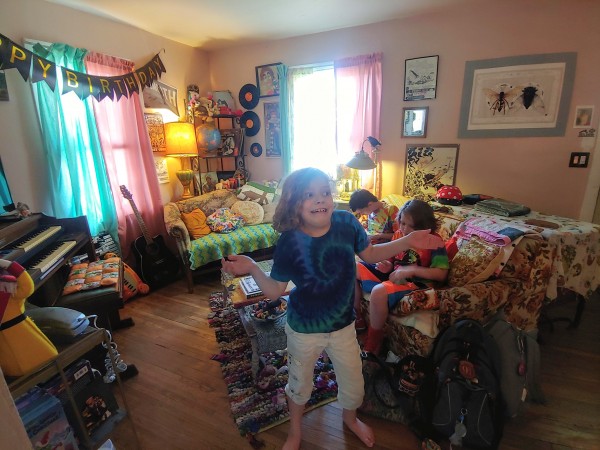 After spending our first day in town at Frontier City in the heat, we were eager to enjoy some air-conditioned fun times at the Cowboy Museum. But to say we weren’t a little nervous about possible virus exposure would be a lie since two of our family members are asthma sufferers who become very sick when they contract respiratory infections.

We had lost some of our mask supply the day before between roller coaster sweat and user error, so we faced the sudden problem of mask shortage. Thankfully, cowboys and bandanas go together like peanut butter and bananas, so we were able to score a neon orange bandana at the gift store that I’m absolutely sure is historically accurate.

If you remember one thing about this museum, be sure to plan for how many exhibits there are to see. Both times we’ve visited, we ended up making choices about where we wanted to spend our time because there was so darned much to see. If you want to check out the whole place, plan for several hours and a lunch break when you go.

I am only sharing new info here, so if you’re planning a trip, definitely take some time to read my post from last year and Tara’s from April 2019. Here’s what was new: 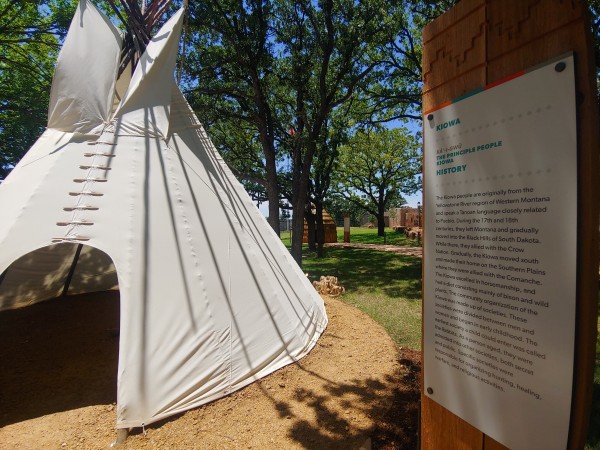 This incredible outdoor play space includes loads of interactive and educational STEAM activities for kids of all ages. For our kids, the best part was the opportunity to experience the housing and lifestyles of different Native tribes. Every type of dwelling prompted deep conversations about the various tribes as they stepped into a Kiowa tipi, Caddo grass lodge, Chickasaw Council House, Pawnee earth lodge, Hopi pueblo dwelling, and Puebloan cliff dwelling. The experience reinforced the diversity of Native tribes, sifting through the monolithic caricatures passed down through pop culture and history books to see the complexity and beauty of each tribe’s way of life. 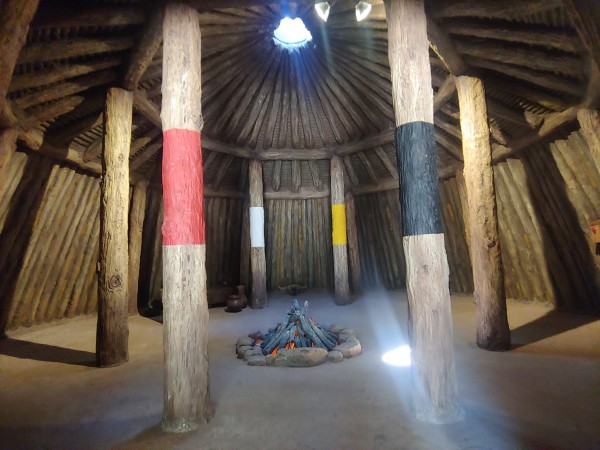 While we were there, we also enjoyed learning about the strange beaver pelt-based economy of the frontier at Love’s Trading Post. 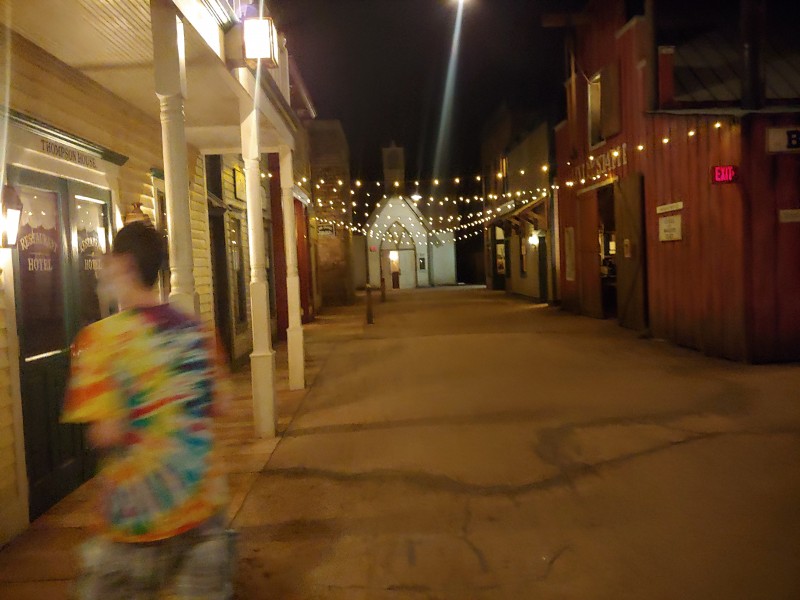 Prosperity Junction is an indoor replica of a turn-of-the-twentieth-century cattle town with the same level of detail you might expect at a Disney park. We strolled down the street peering into windows of a general store, schoolhouse, church, jail, printing press, and even the doctor’s office. 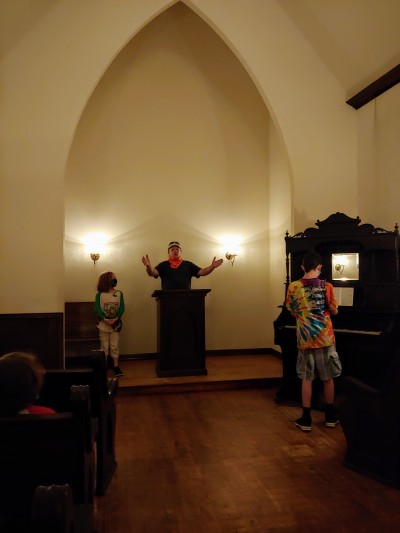 In addition to the cool new museum additions, we had time to check out some of the current exhibitions featured at the museum. 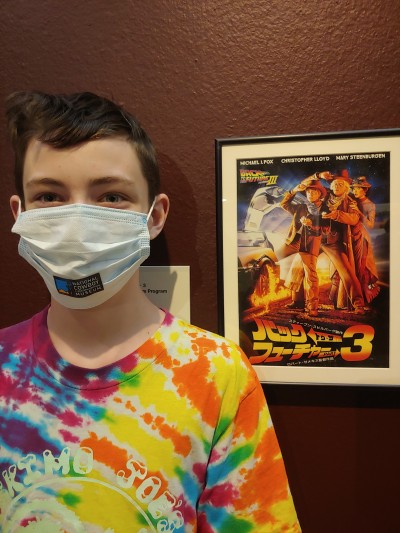 Warhol and the West

I have spent my entire life thinking I didn’t care for Andy Warhol, but I actually think I never gave him a chance because the only Warhols I had ever seen were hyped beyond parody. As it turns out, I do actually like Warhol. I just don’t like the heavily commodified hotel art aspects of Warhol’s more popular pieces.

Warhol and the West was extended through this weekend, so stop by soon if you’re planning to.

This exhibition was awesome. If you don’t know the name Dorothea Lange, you are still probably familiar with her work if you’ve seen those famous black-and-white images of America during the Dust Bowl.

As a three-part short film in the exhibition explained, Lange’s work is an exploration of photography as activism. A photojournalist hired during the New Deal by the U.S. government to document the struggles of poor Americans during the Great Depression, Lange had a gift for earnestly humanizing the faces of those impacted by government policy. She later brought the same raw honesty to her documentation of Japanese-American internment camps during World War II, so honest the United States government impounded them.

As a writer viewing her work, I found myself challenged to ask how my words could shed light on injustice in the world. It is easy to forget that a simple act of seeing the world and telling a story can be so revolutionary.

This exhibition, which lasts through this weekend as well, focuses on pop culture depictions of the West. It didn’t take Arthur long to find his western, while I was enamored with this gorgeous dress from a show I enjoyed, Hell on Wheels. 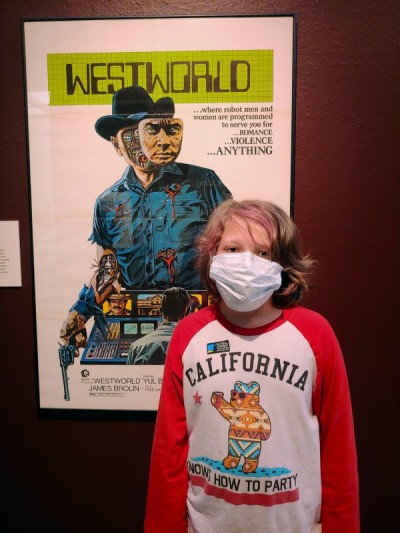 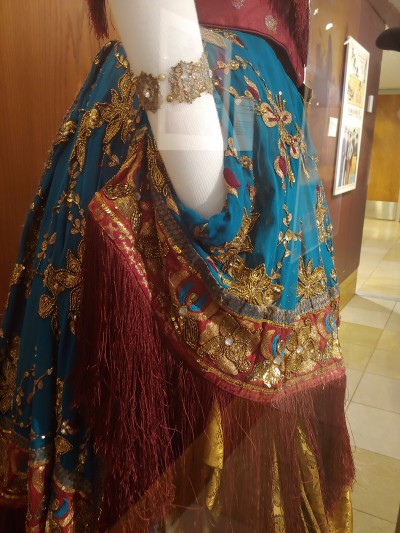 If you feel like getting out this weekend, it’s a short drive to Oklahoma City. Admission is only $12.50 for adults, $5.75 for ages 6 through 12, and free for ages 5 under. The museum is open 10 to 5 Monday through Saturday and noon to 5 on Sundays.

All right, pardners. Thanks for stoppin’ by this corner of the galaxy, and be sure to have a beautiful week in your little nebula! 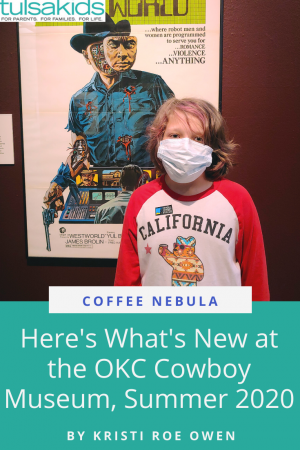