Yee-haw! Our Visit to the National Cowboy and Western Heritage Museum

Following a morning at Science Museum Oklahoma, Daniel, Joss and I continued down the road to the National Cowboy & Western Heritage Museum. If you’re thinking, “Wow, that’s a lot to do in a morning. How did a four year old handle it?”–well, Joss had several mini- and near-meltdowns here. He was definitely tired. However, there were parts we all really enjoyed, so it was not all tears and anguish!

We later found out that the main children’s area, Children’s Corral, was closed for remodeling (it is scheduled to open in August or September 2019, at which point it will have an additional interactive play area), but there were enough kid-friendly activities anyway that we didn’t even realize we’d missed it! However, it sounds amazing (dress-up! a Chuckwagon where kids can “cook” their parents a meal! a–pretend–horse to ride on!), so we are looking forward to a return trip 🙂 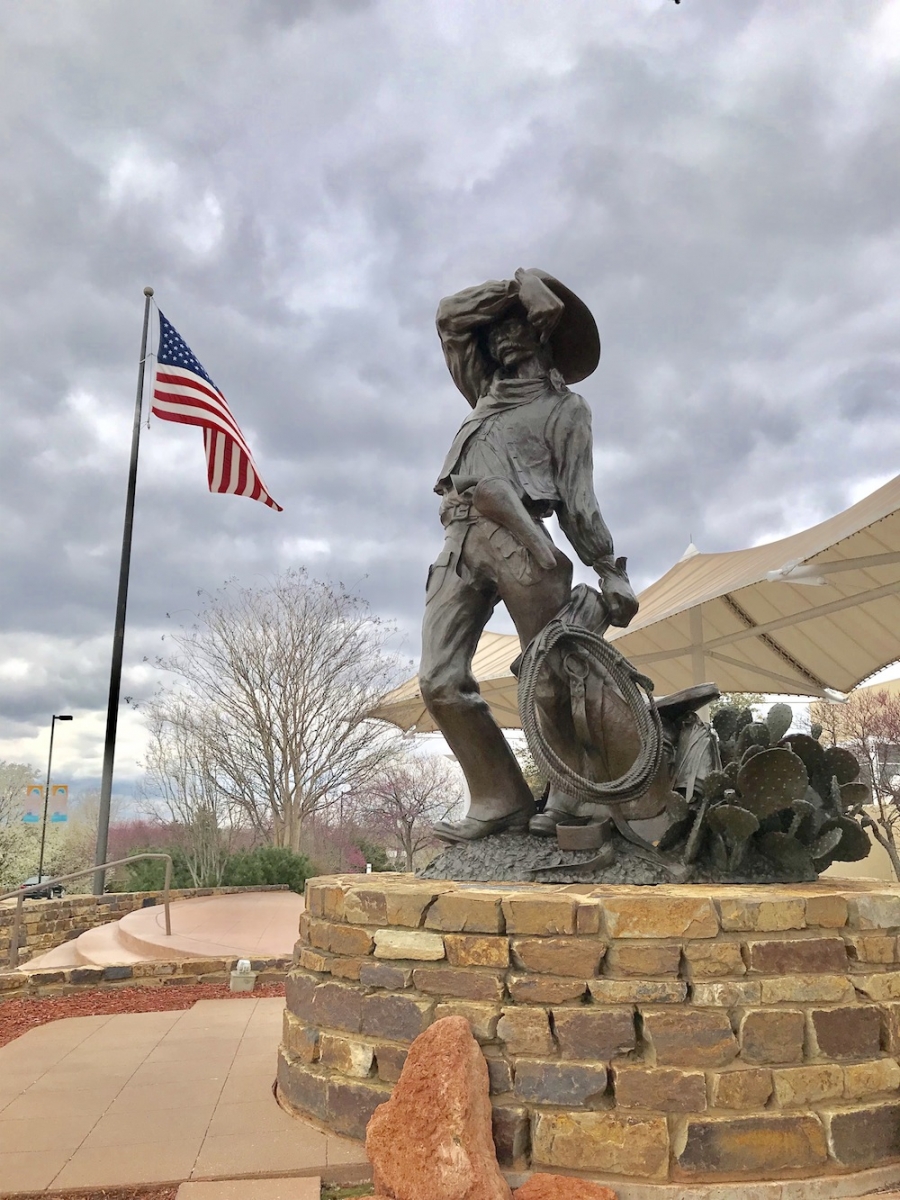 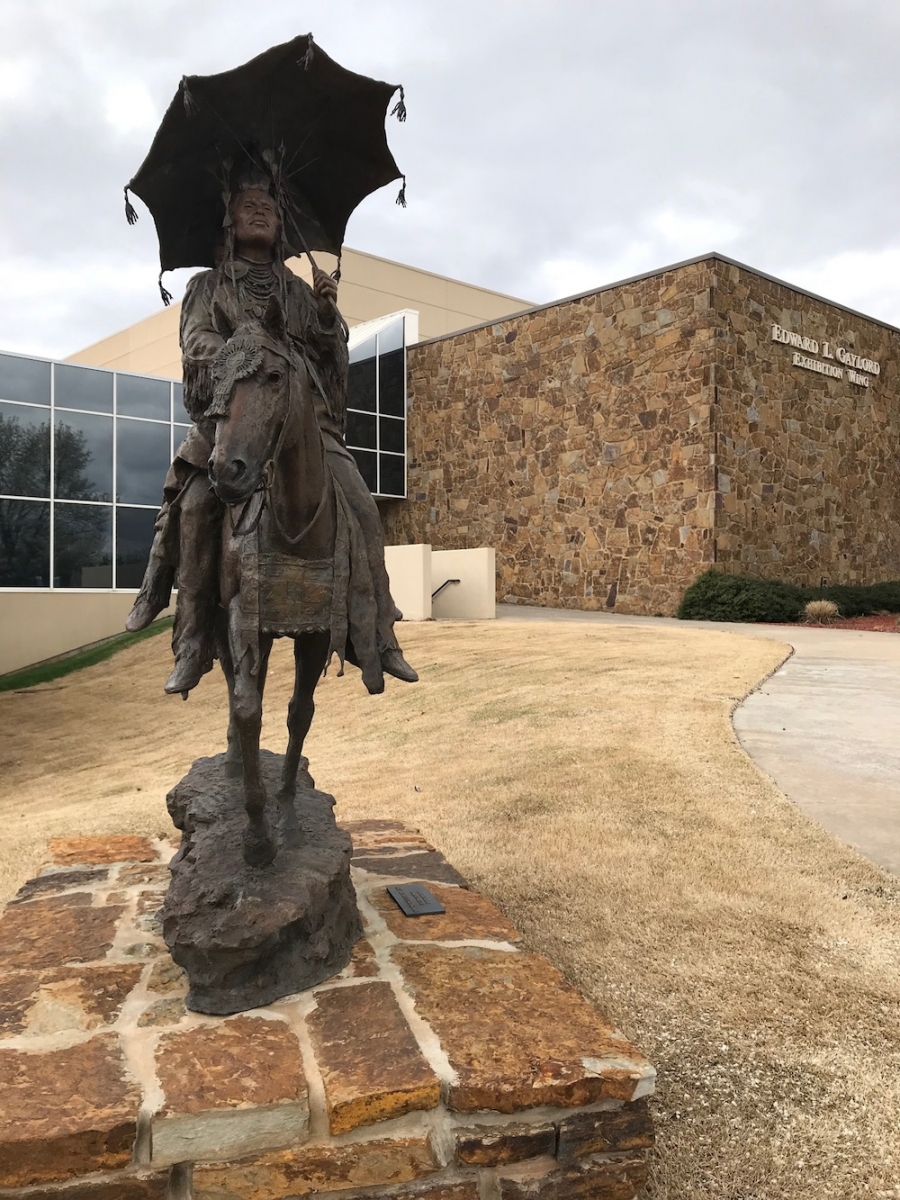 Two sculptures near the museum entrance

“End of the Trail” and Getting Your Bearings

Essentially, all I knew about the National Cowboy & Western Heritage Museum  going in was that one of its significant works is the sculpture “End of the Trail” by James Earle Fraser (see above photo). “End of the Trail” is so beautiful, and I was looking forward to seeing it in person–but I wasn’t prepared for how massive it is! It’s the first thing you see when you walk in the front door, and it’s hard to look away.

Walking through the main entrance, to the right is the gift shop, followed by the admissions desk, and at the end of the entrance way is “End of the Trail.” Down the hallway to your left is another Fraser statue, “Abraham Lincoln.” The museum has made it easy for those of us who can’t visit a museum without thinking about our Instagram accounts to know where some of the most popular photo ops are, by placing “foot prints” on the floor in front of the work in question so you know where to stand to get your selfie 😉 The first of these we noticed was in front of Lincoln. 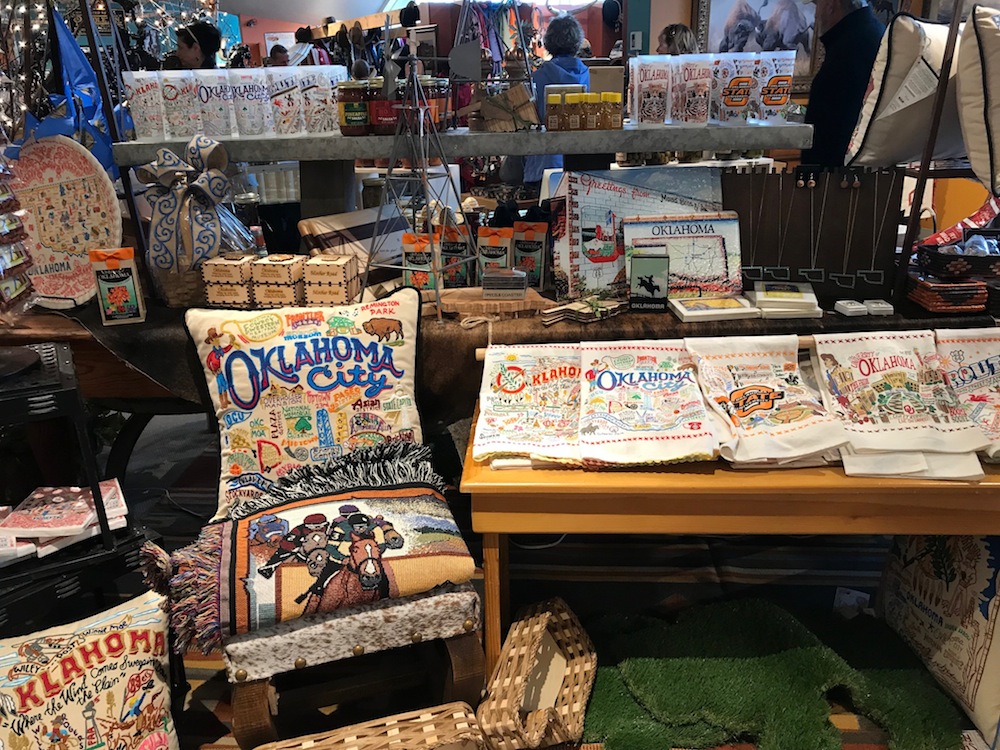 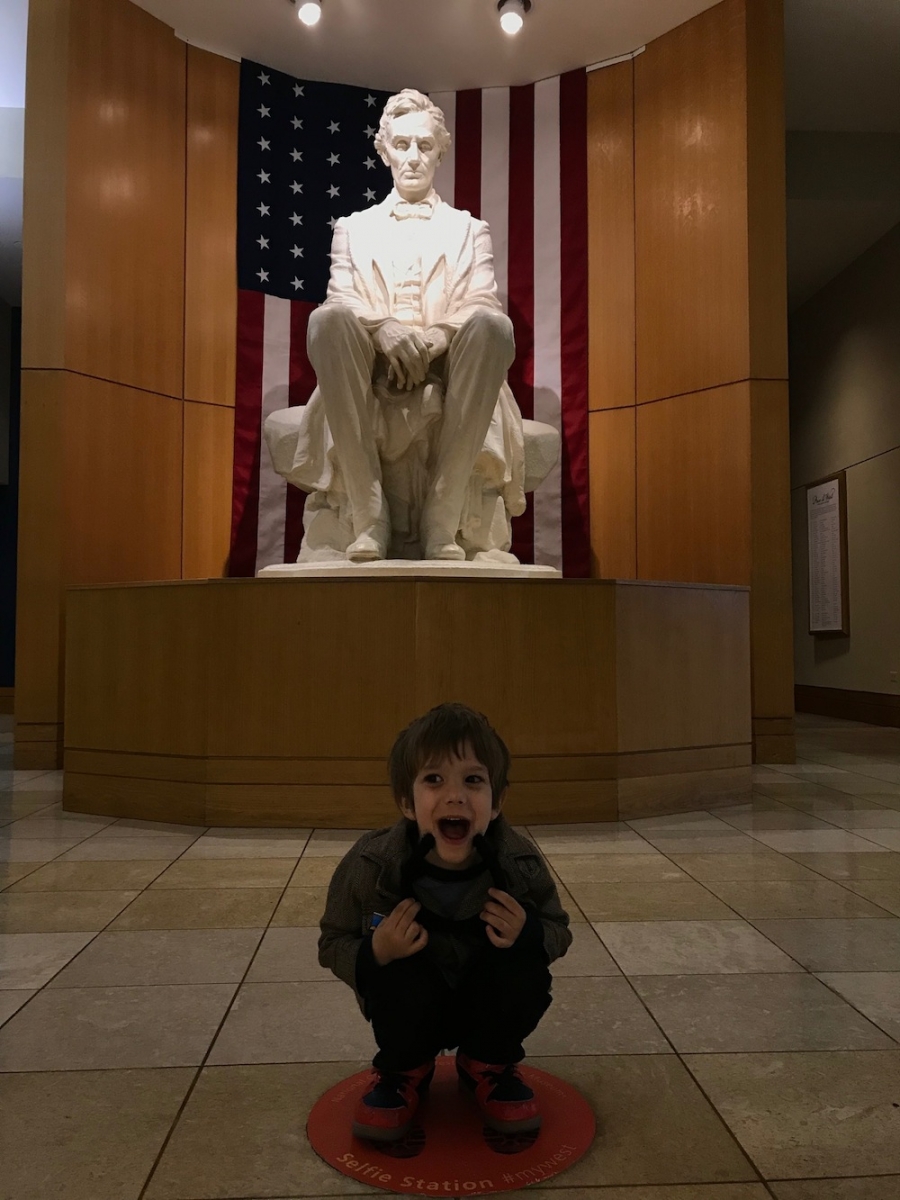 If, instead of heading toward Abraham Lincoln, you head down the other hall towards a giant mountain lion sculpture, you will find the majority of the museum’s exhibitions, including their temporary exhibition “Ancient. Massive. Wild. The Bison Exhibit” (Open until May 12). 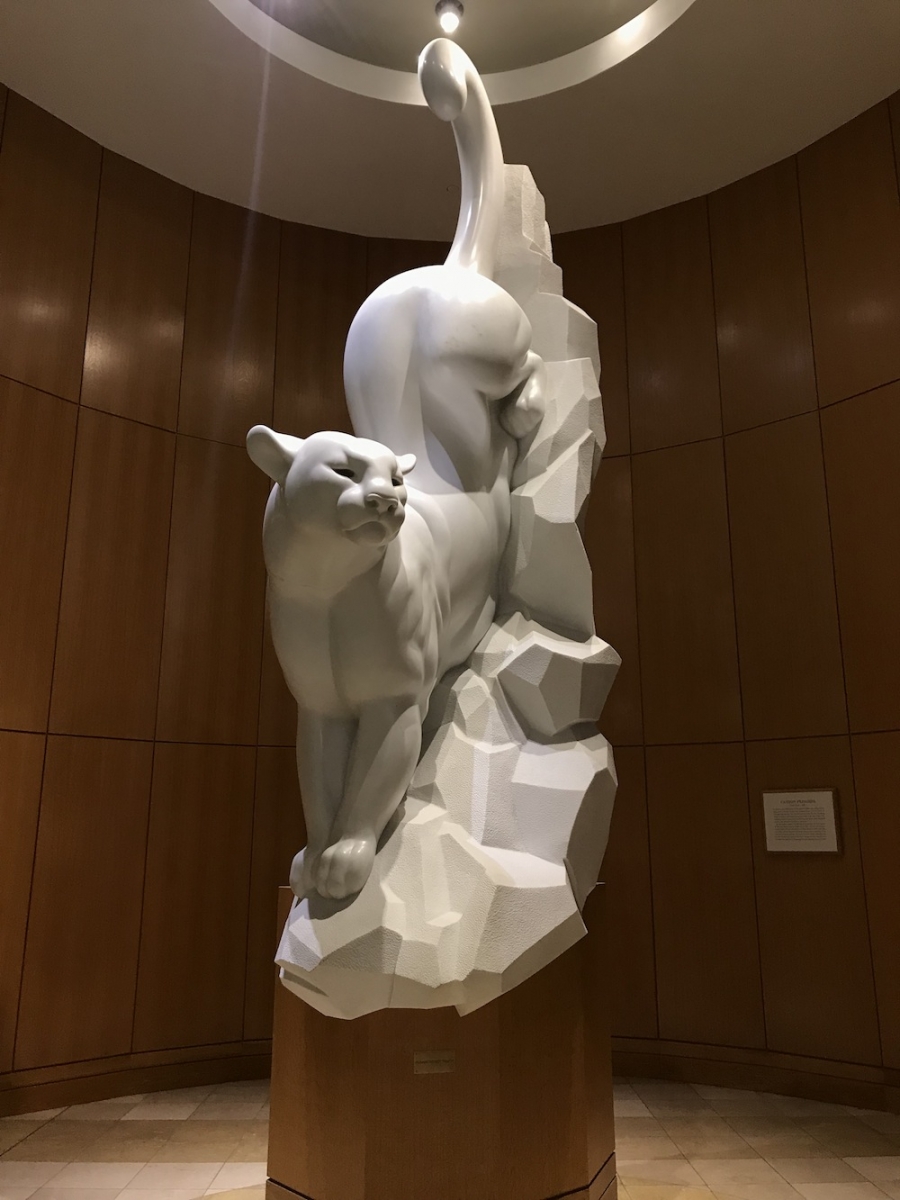 “Ancient. Massive. Wild.” showcases paintings and sculpture of bison, but also gives information about the history of bison in America (including the OKC Thunder’s mascot Rumble), including how it was used and declining population numbers. This includes some touch-and-feel elements, like the bison pelt below. 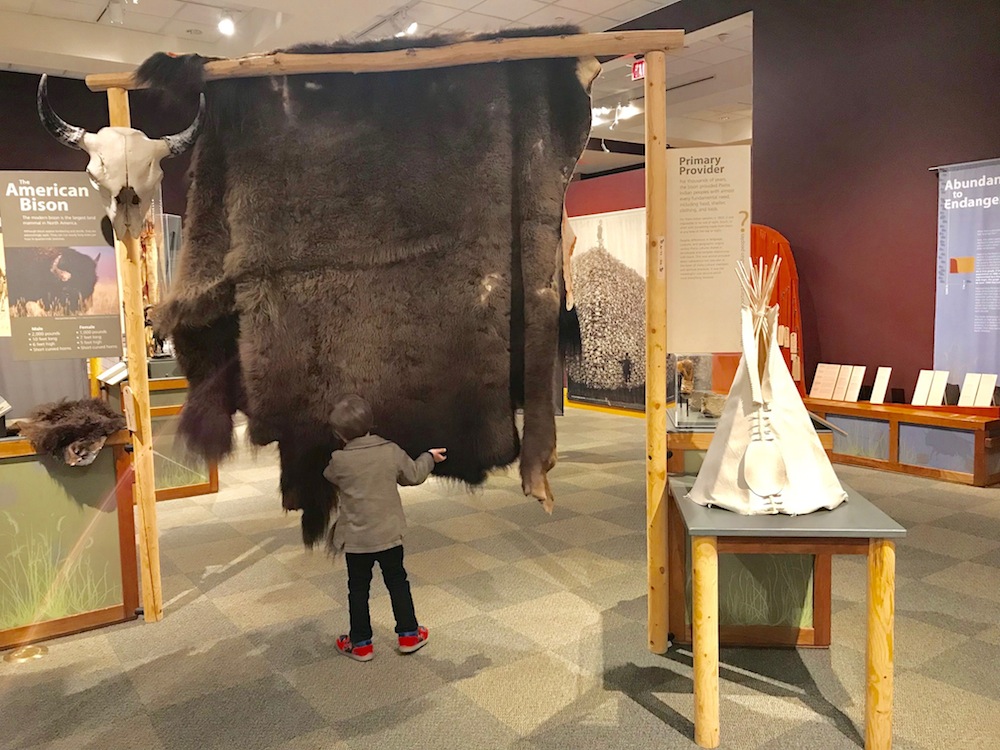 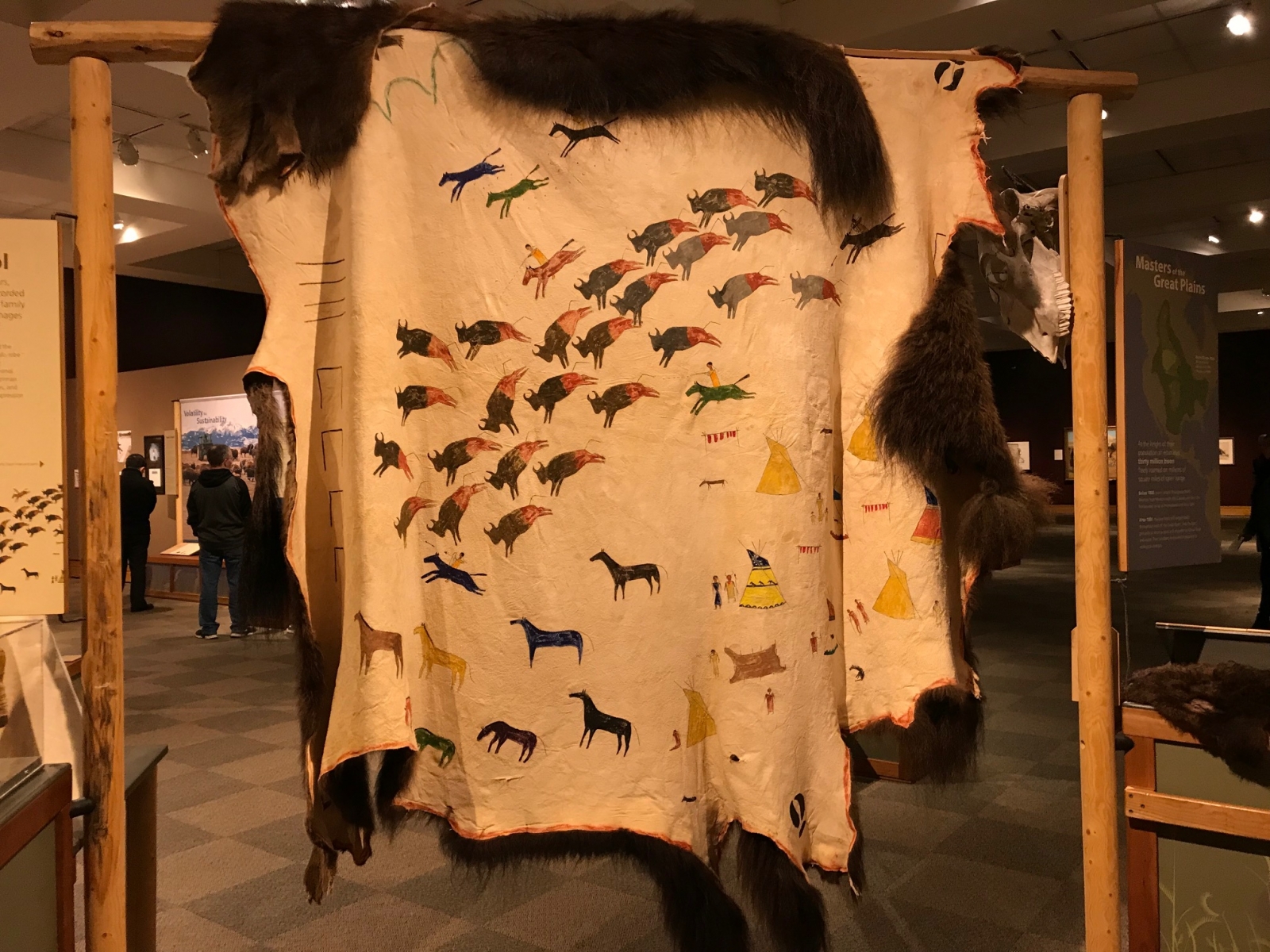 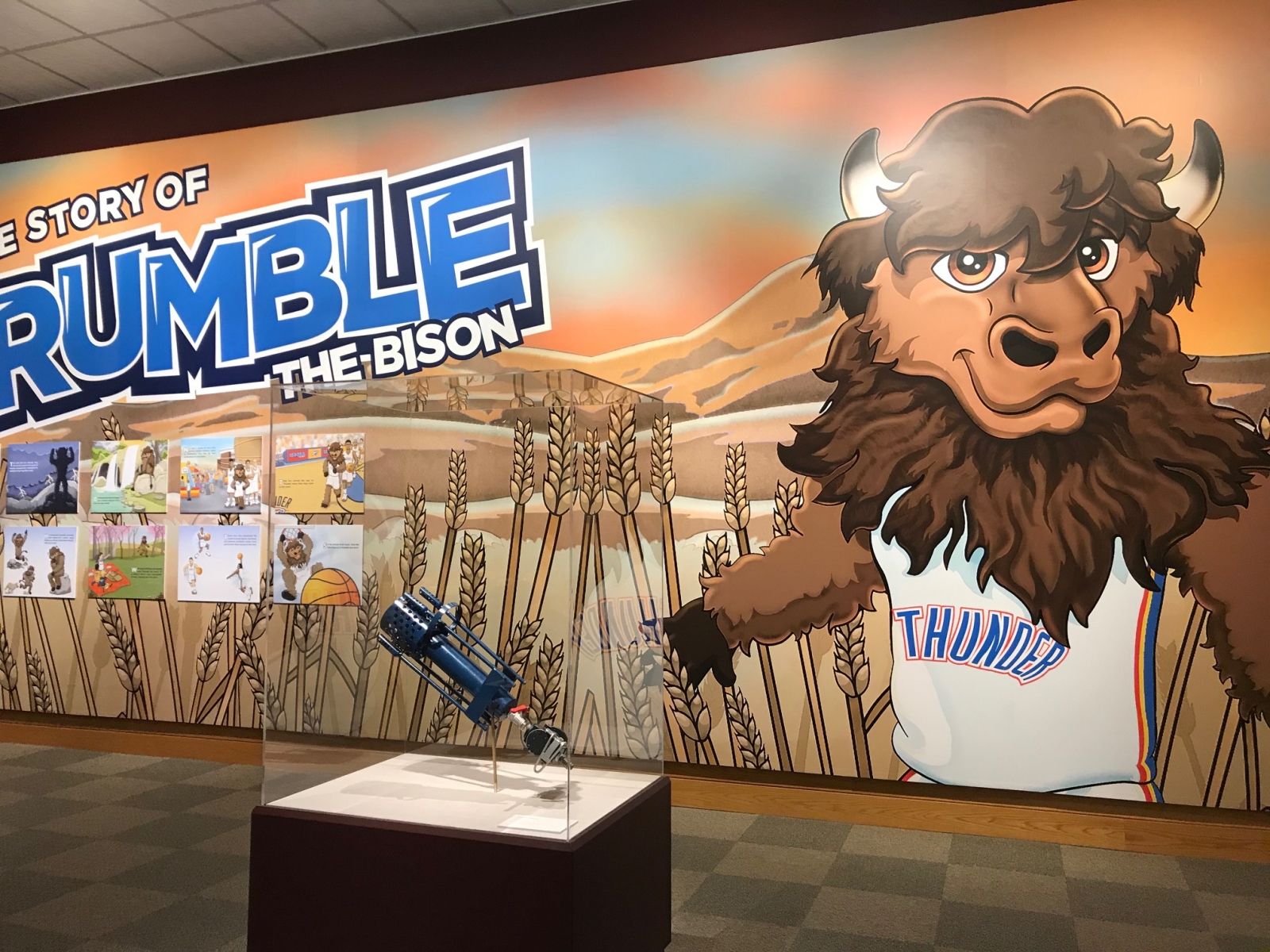 Although we grabbed the “Be Like Rumble Scavenger Hunt” activity booklet, we were moving too fast through the exhibit to complete it. However, if you do get the chance, complete the scavenger hunt to get a prize at the front desk before you leave!

“Ancient. Massive. Wild.” is basically divided up into three sections: the first highglights bison art; the second bison history; and the third has activities for kids, including a reading corner, a build-your-own-tipi table, a bison hide stamping station and a draw-a-buffalo station. Joss’s favorite was the bison hide stamping. He created an elaborate story that involved bison encountering fire, then fireworks, but finally water came along and saved them. 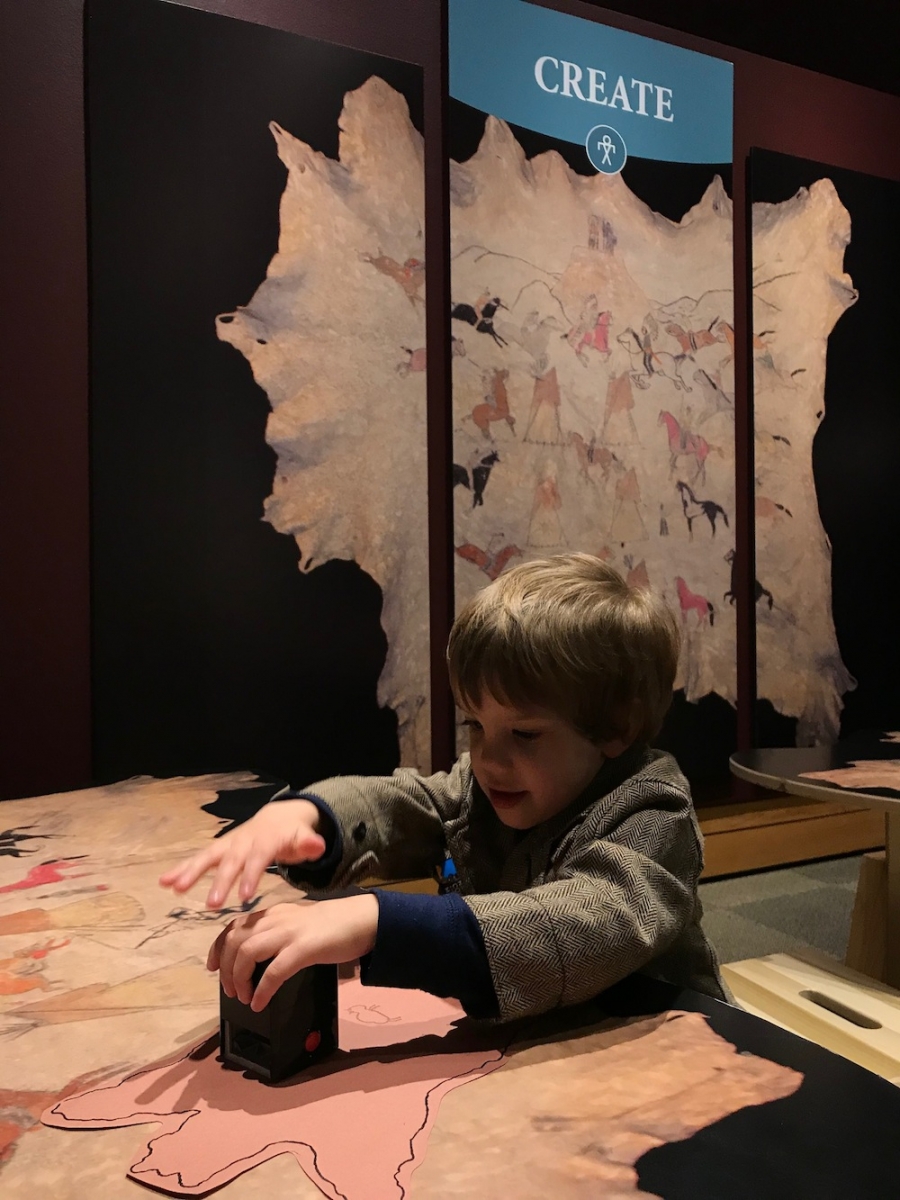 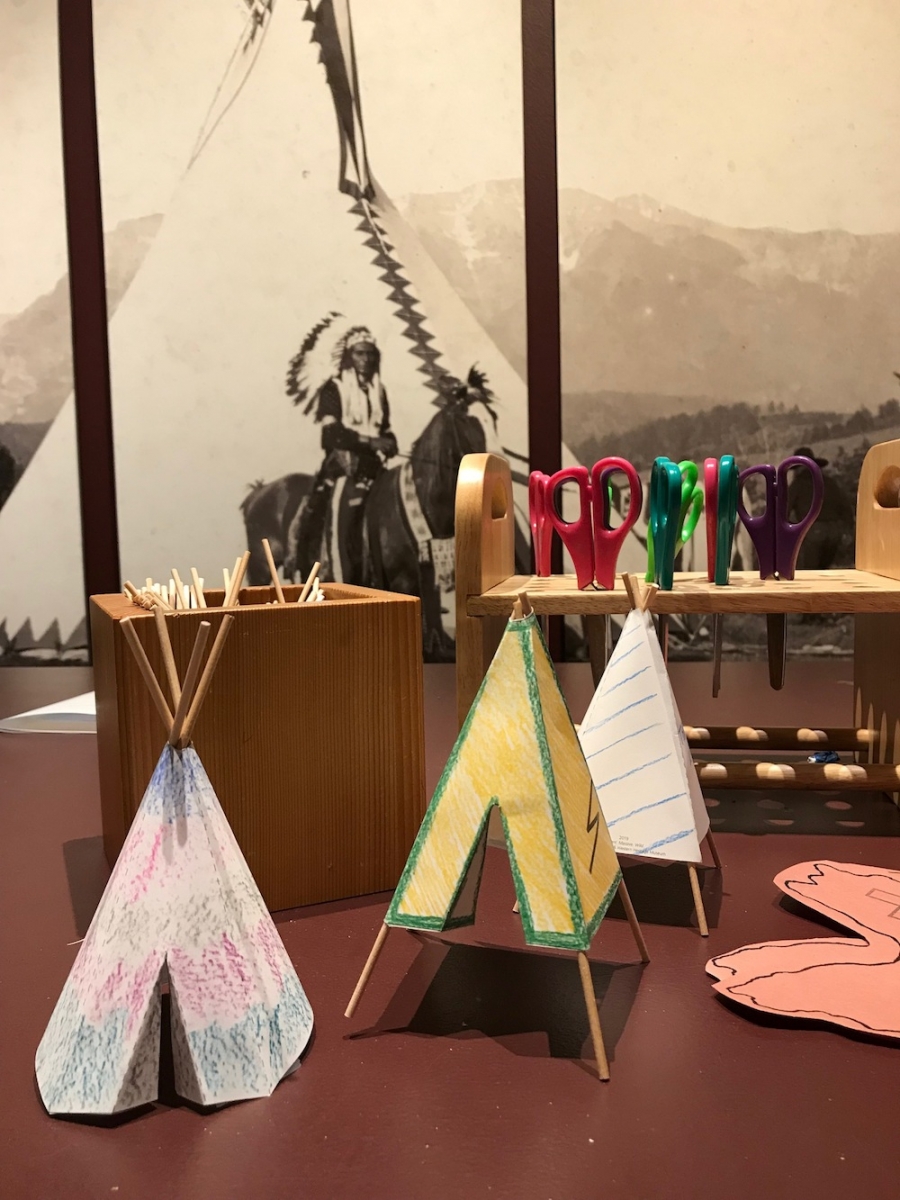 Daniel thought he would improve on the build-your-own tipi design by making a circular tipi resting on the ground rather than on stilts…which led to the first of Joss’s true meltdowns. He thought the other version looked like rocket ships, and THAT is what he wanted. Ha. 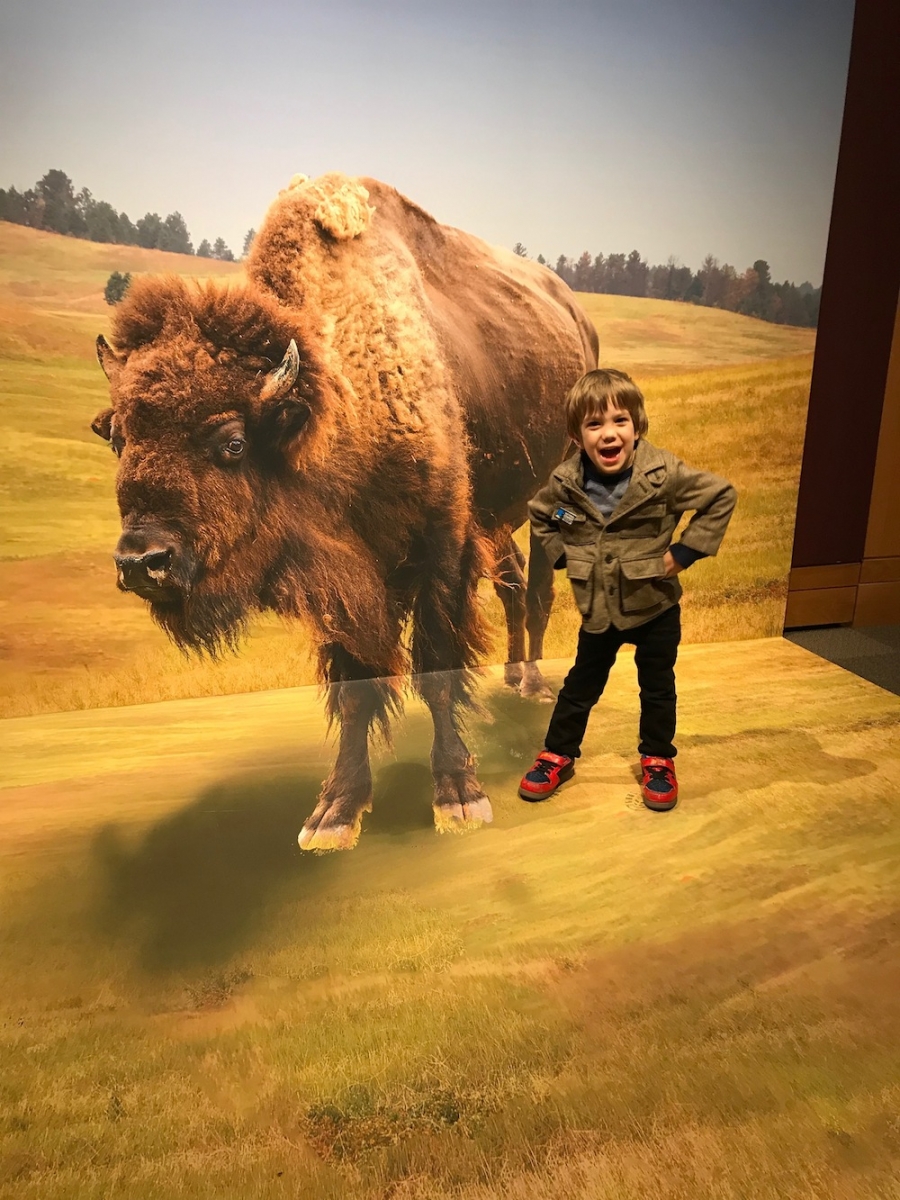 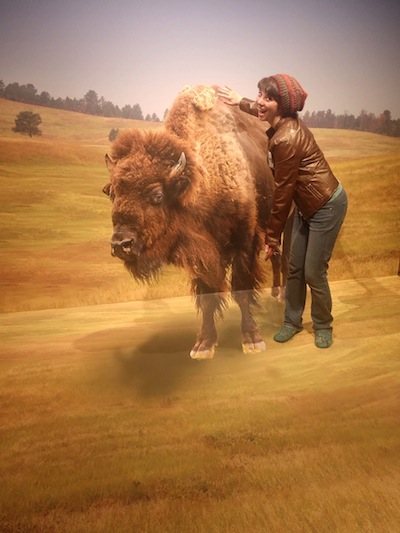 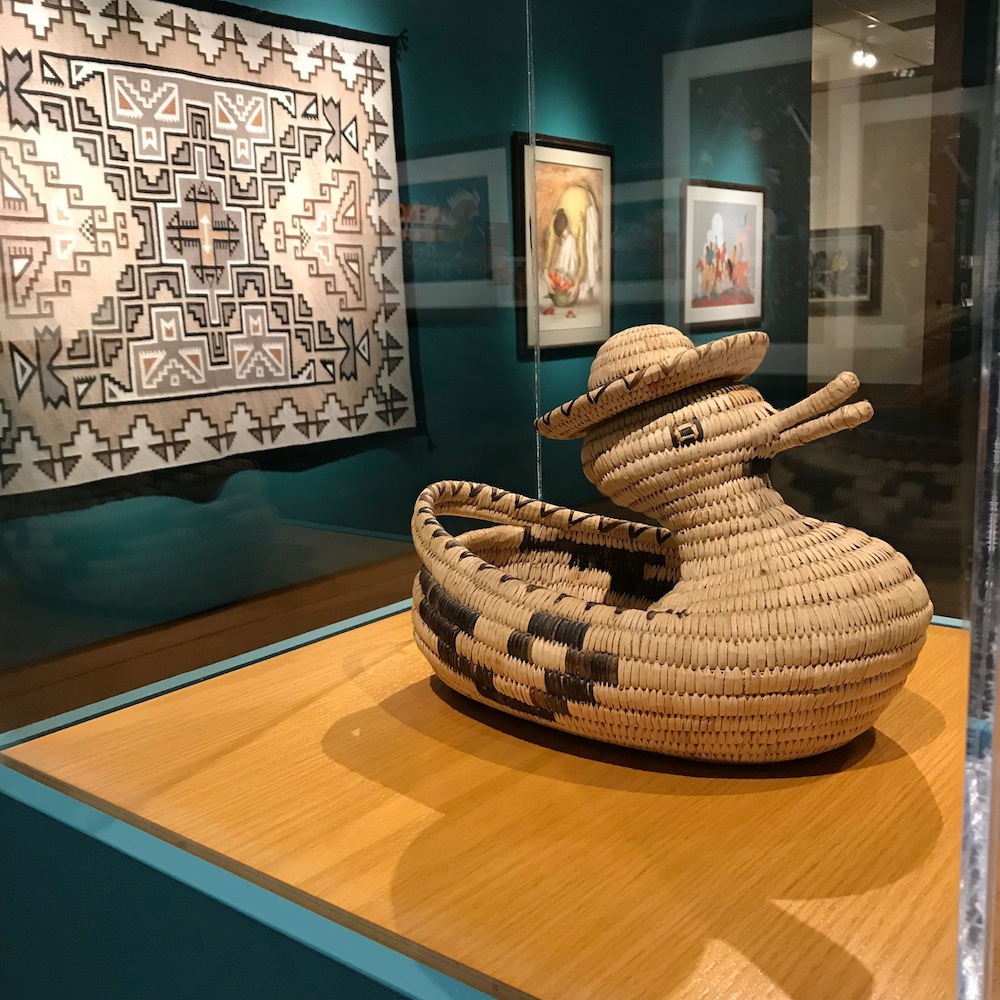 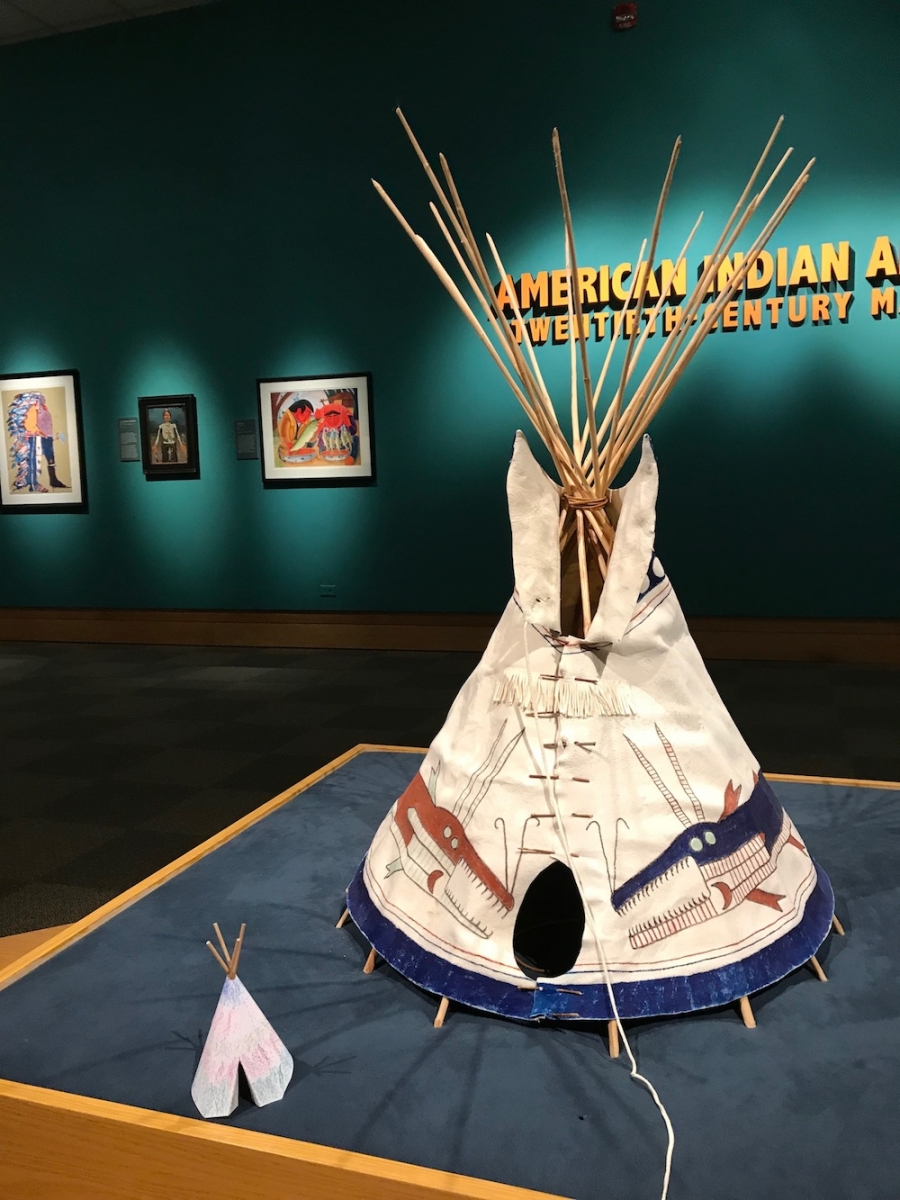 A couple works from the American Indian Artists: 20th Century Masters exhibit (open through May 12)

Since Joss’s mood was so tenuous, we REALLY failed to do justice to the museum’s collection of art. However, I enjoyed this small exhibition, “Horseplay,” which displays the works of Thomas Lovell, including a recreation of his art studio (that view!). It also provides instructions on drawing horses and materials so visitors can try their own drawing. Seeing the artist’s studio was interesting, and Joss enjoyed opening the stall door to reveal the rest of the life-sized horse drawing (see below) 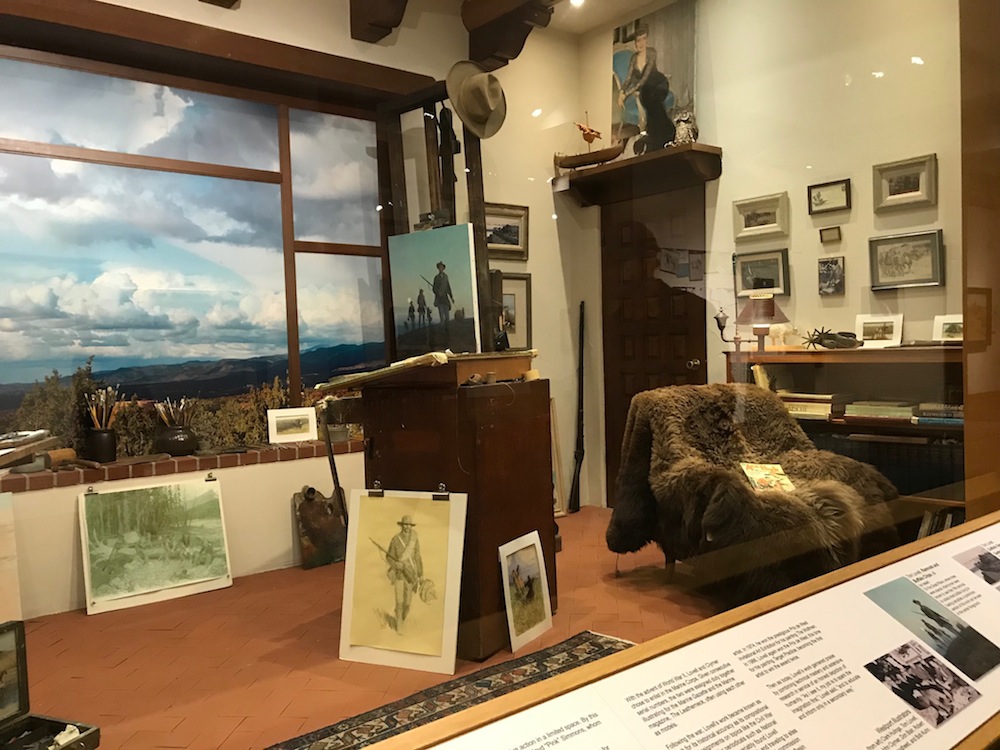 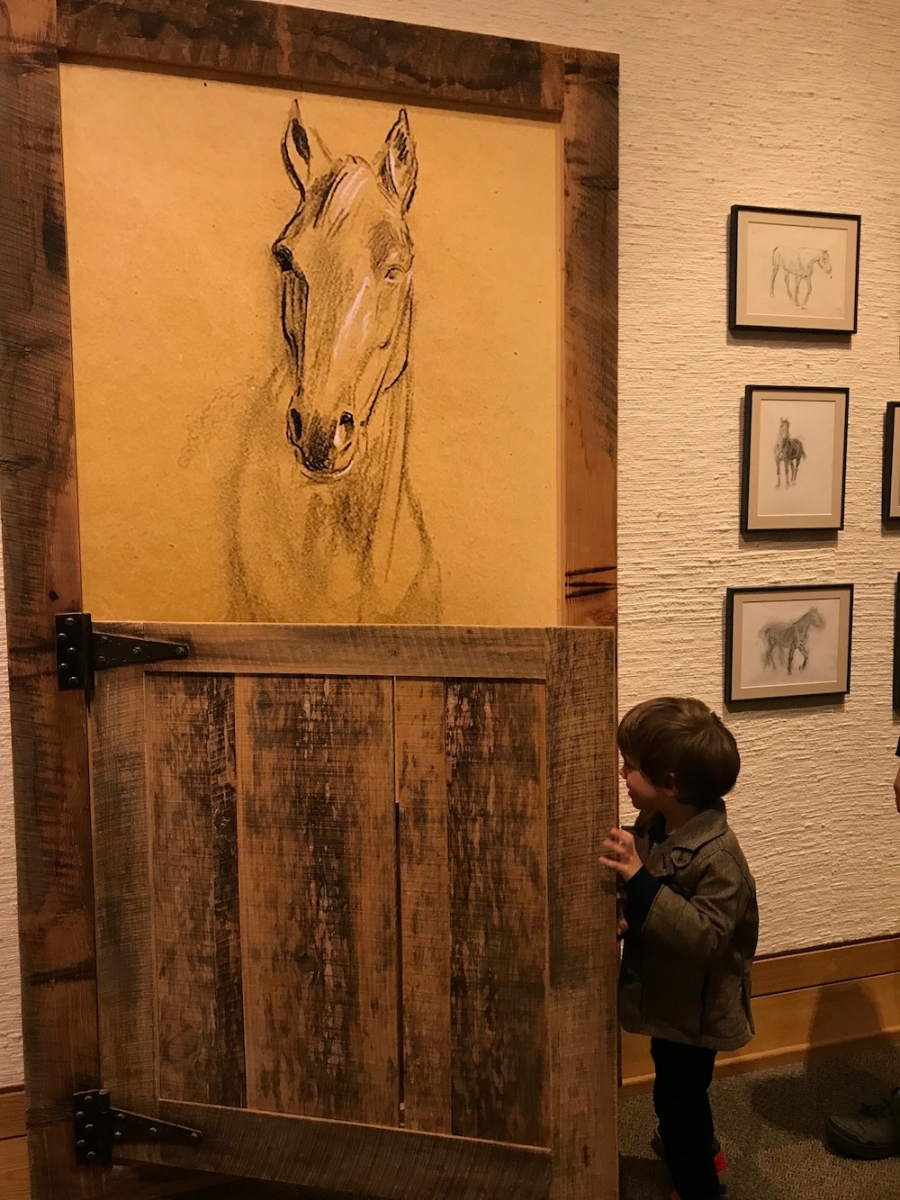 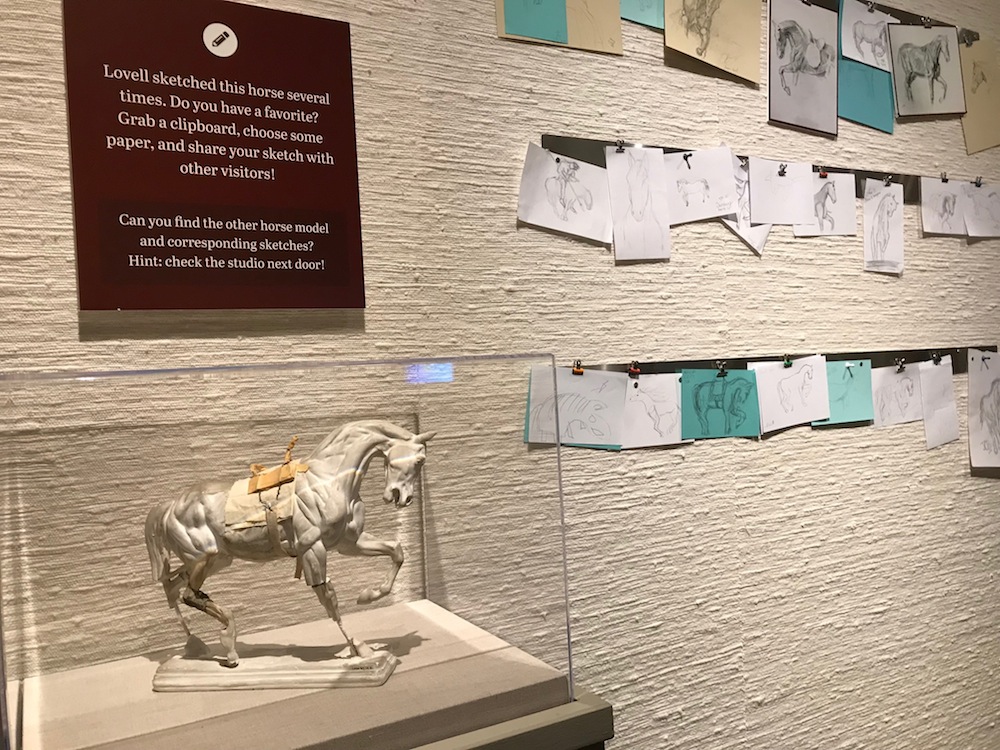 We were astonished and delighted when we came upon “Prosperity Junction,” a recreated western town. Joss was excited to note that it was “outside”–it wasn’t, but the floor was designed to look like dirt, complete with hoof prints, and the lighting was dark, which really helped create the feel that you were indeed walking outside down an old western Main Street! 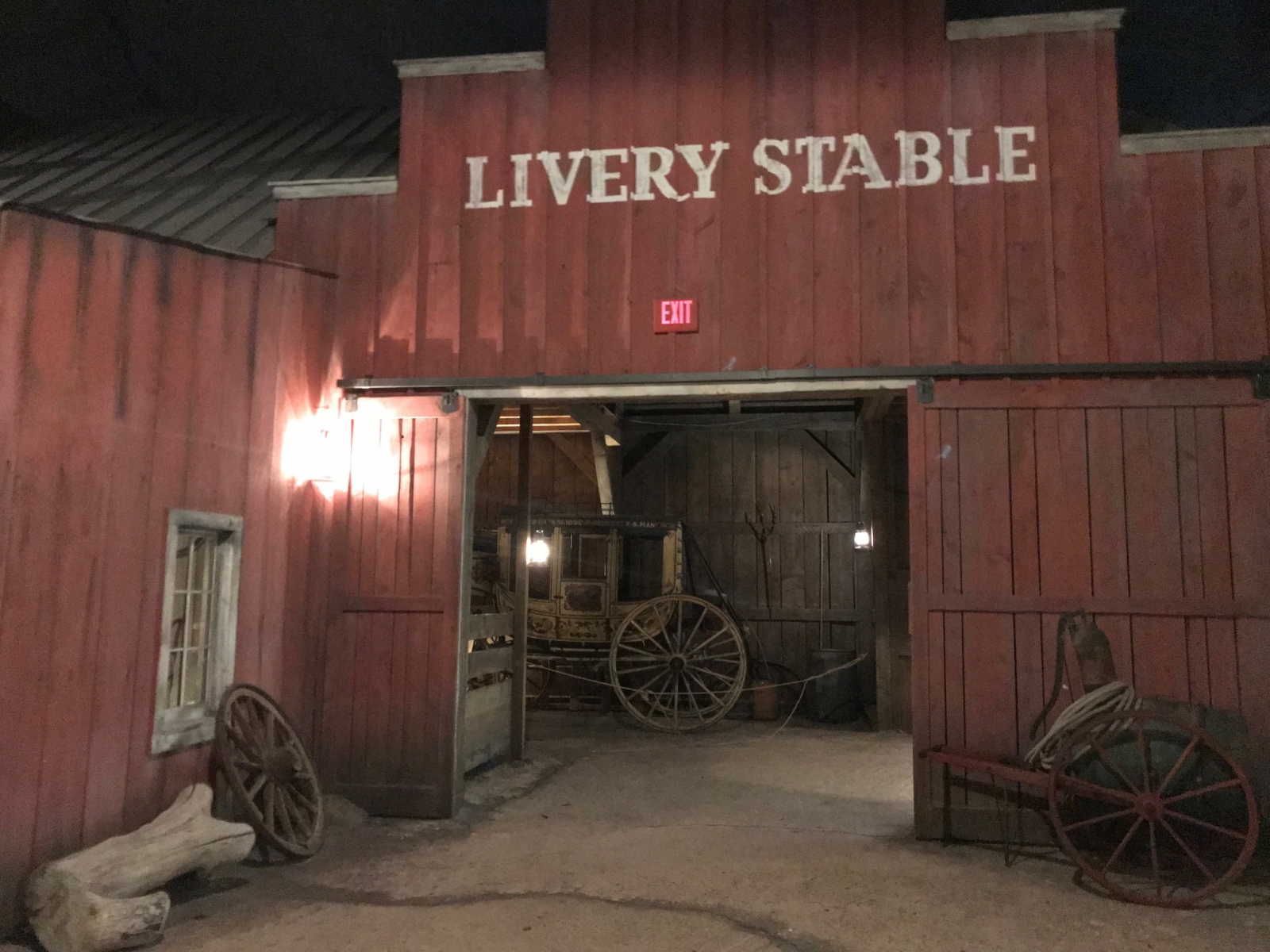 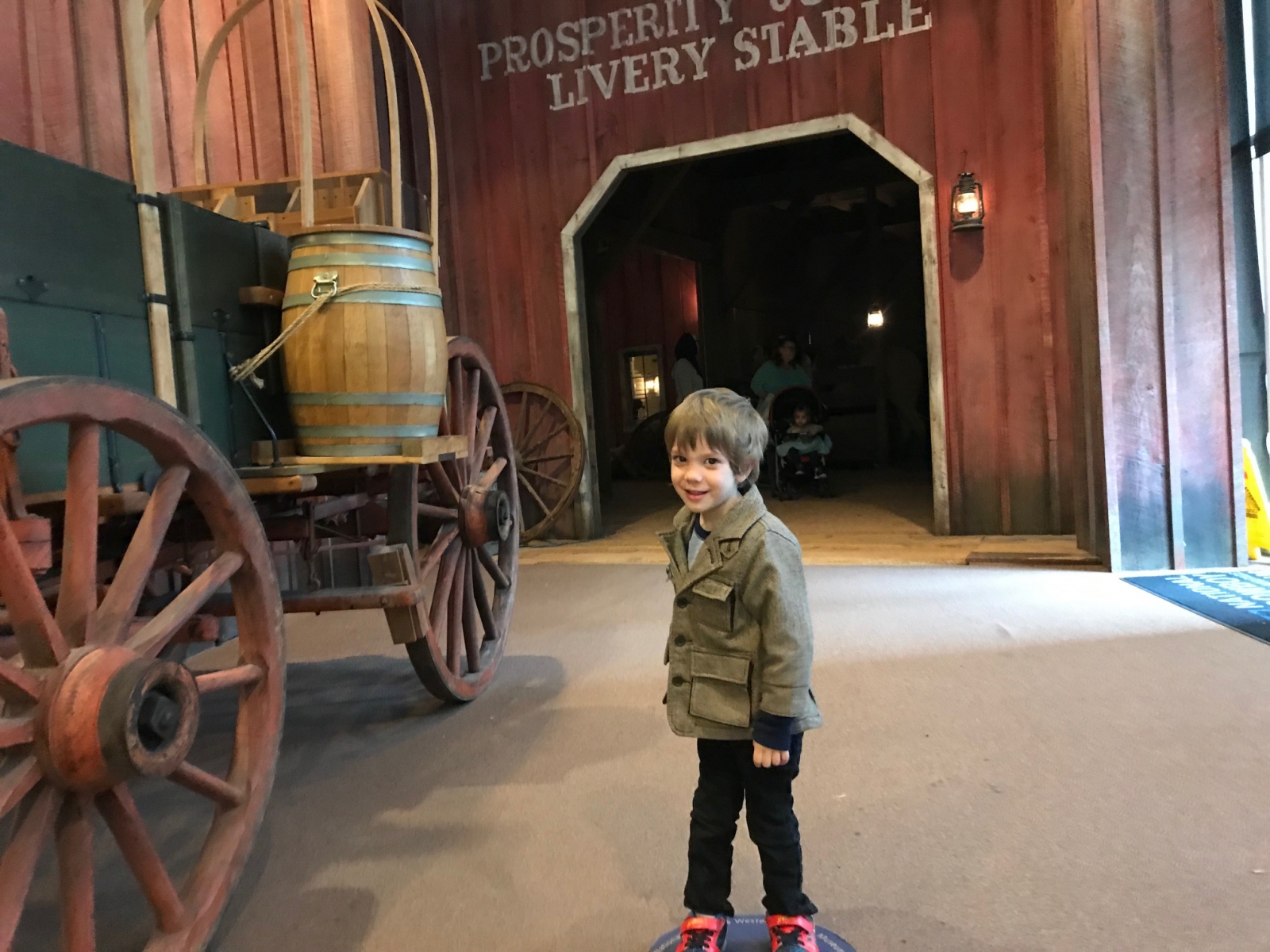 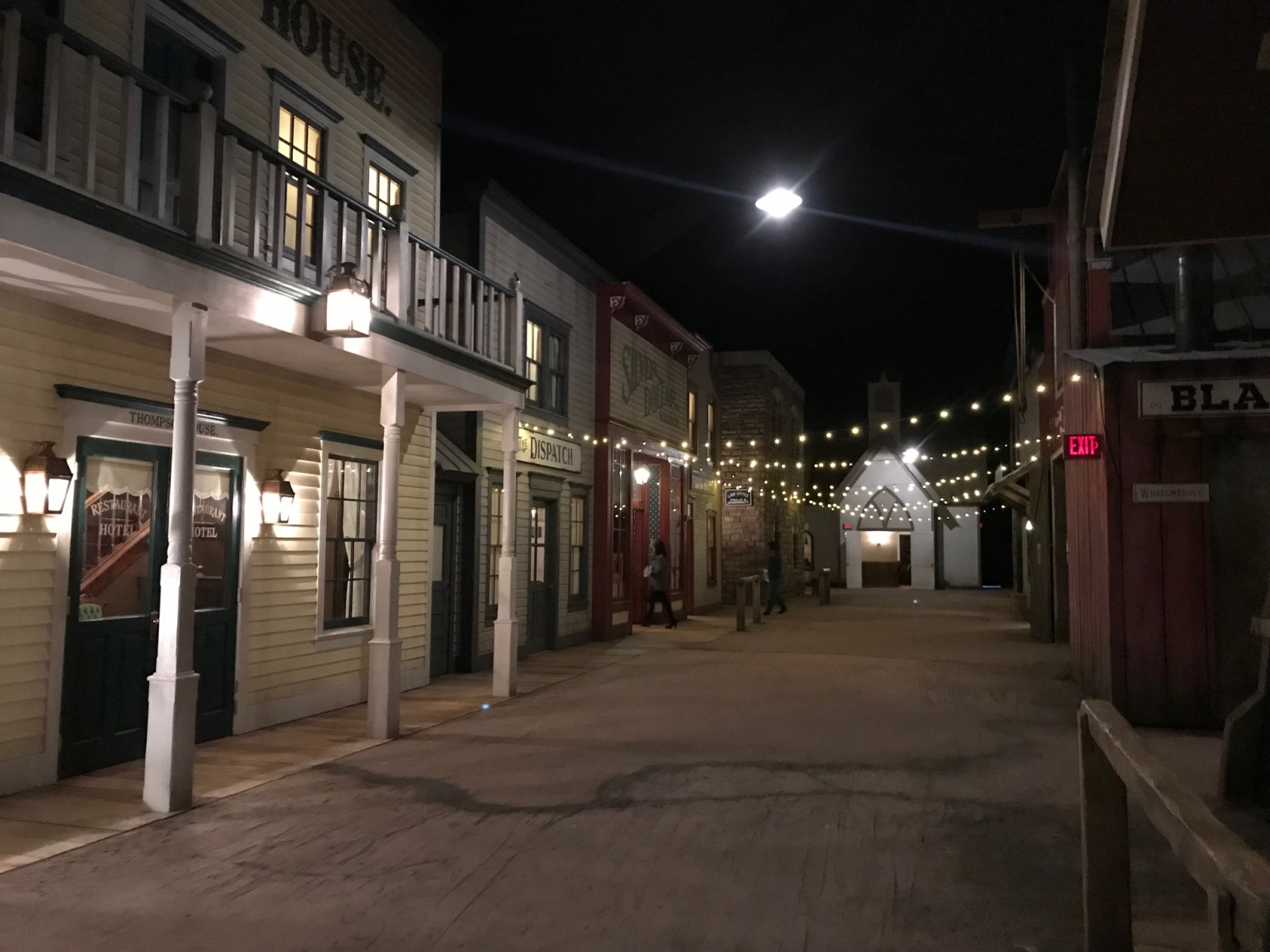 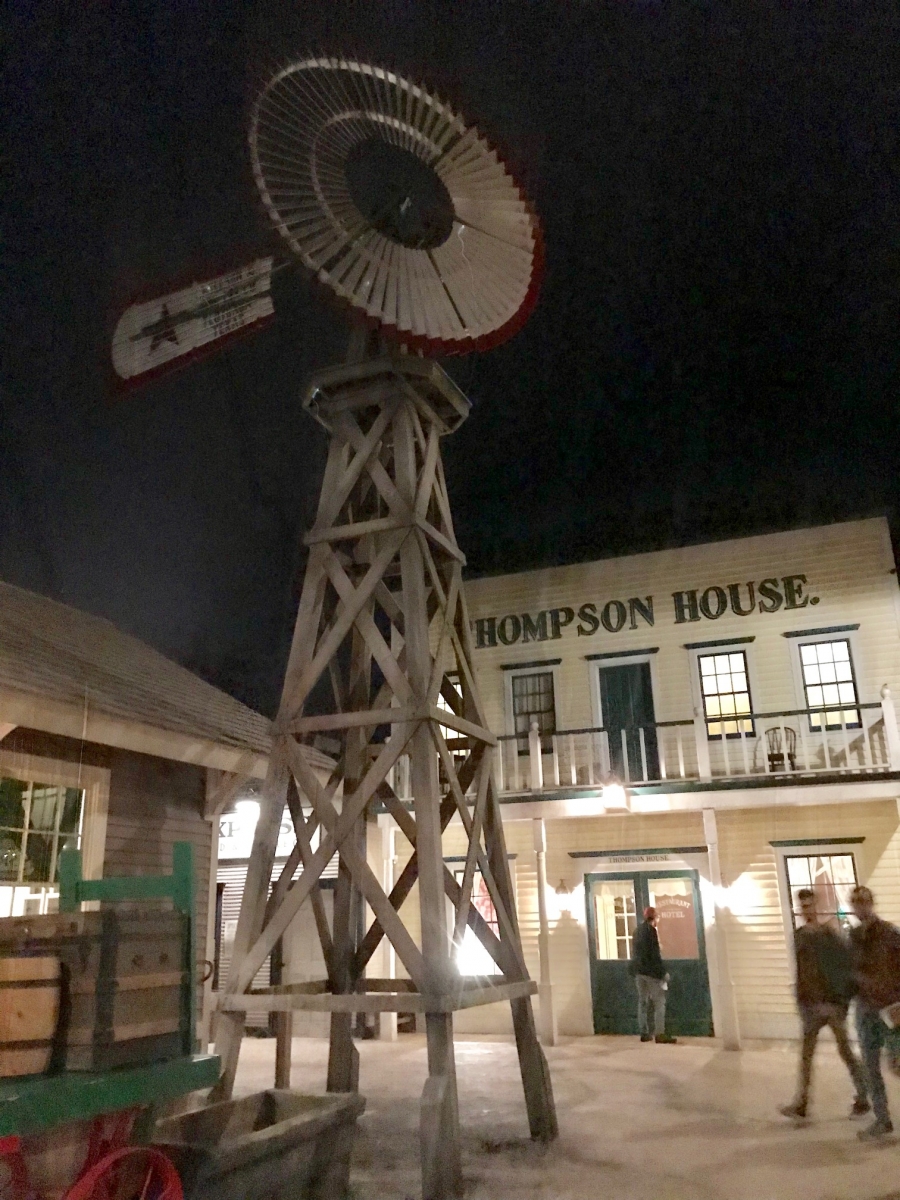 Not only can you walk in and out of buildings, including a saloon, train station, marshal’s office (complete with jail cell!), photographer’s studio, etc., but a lot of the buildings have audio elements, so it sounds like you’re surrounded by locals talking about the day’s events, etc. 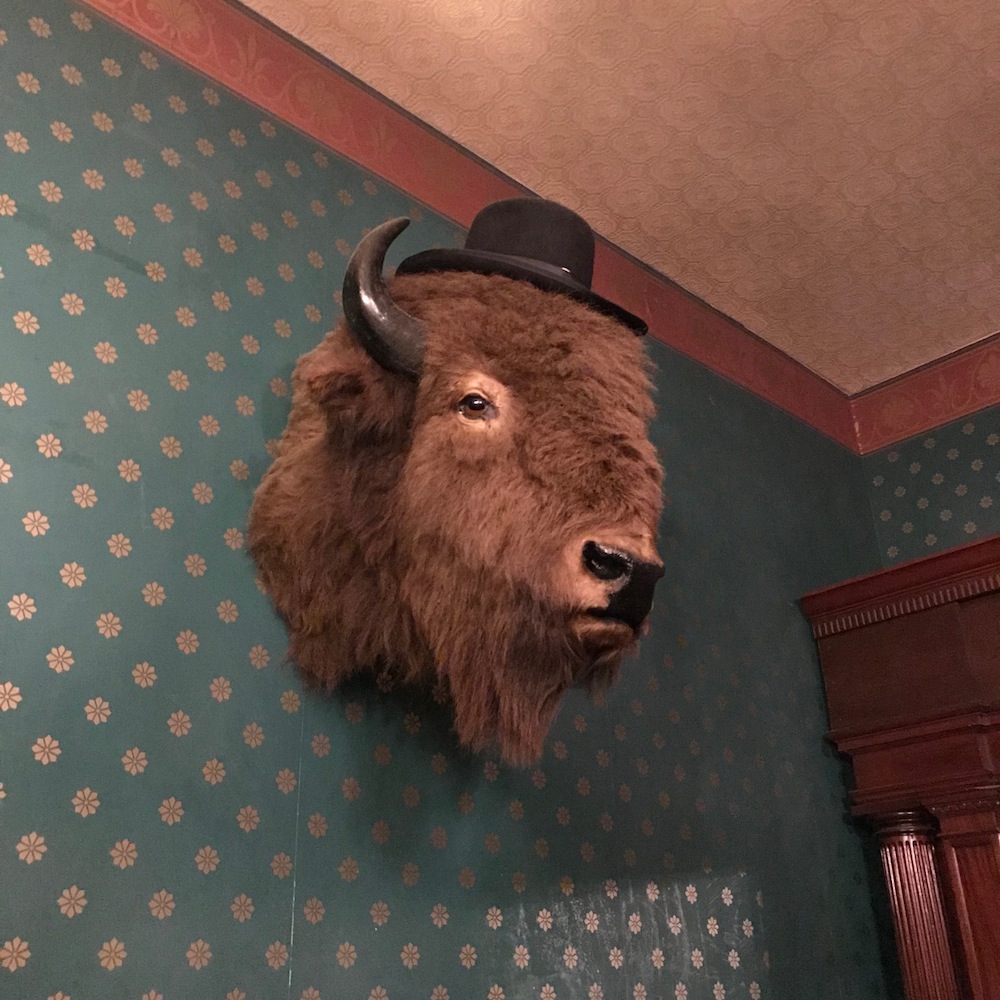 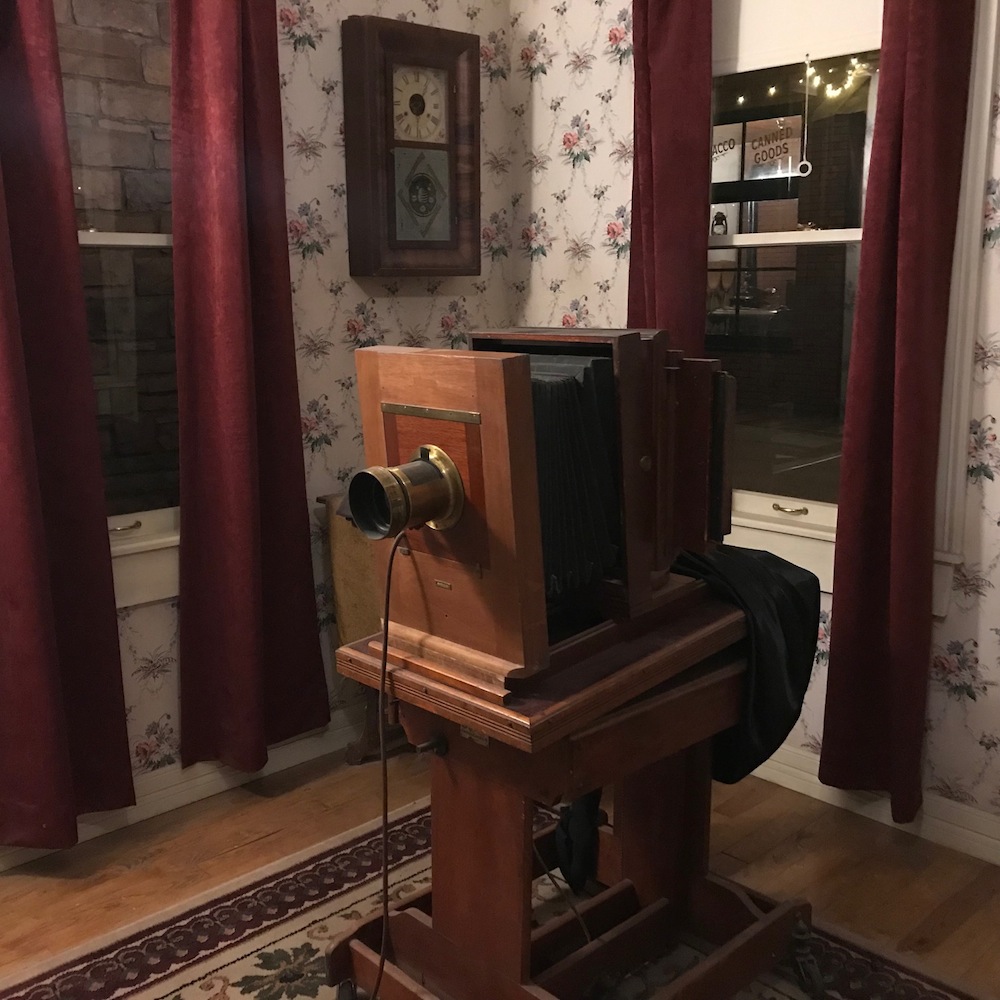 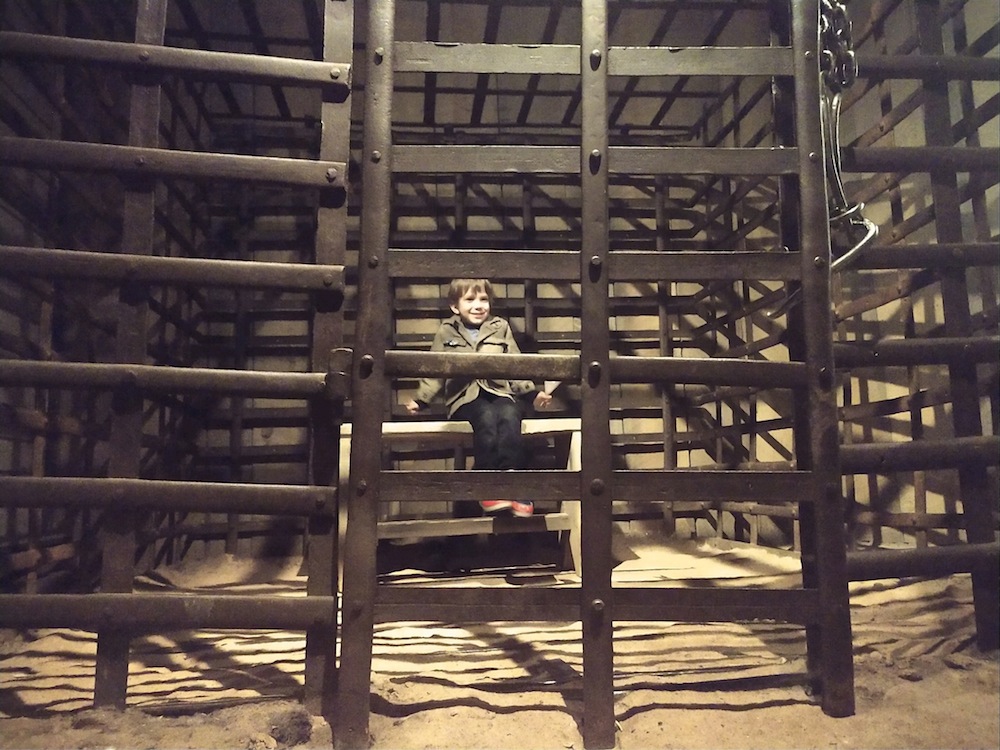 Joss touched something he wasn’t supposed to in the photographer’s studio. An alarm went off, so we scurried across the street…straight into the Marshall’s office and jail! Whoops! 🙂

American Rodeo and a Spin through the Rest of the Museum

On the opposite side of the hall from Prosperity Junction are the bulk of the museum’s permanent collection, which covers many aspects of western culture, from rodeo to western films to western militia. There are life-size dioramas, a small theater where you can watch a movie about the history of the western, plenty of old-time cowboy duds, etc. In places, the museum itself is just as intriguing as the artifacts it houses–like these antler chandeliers! 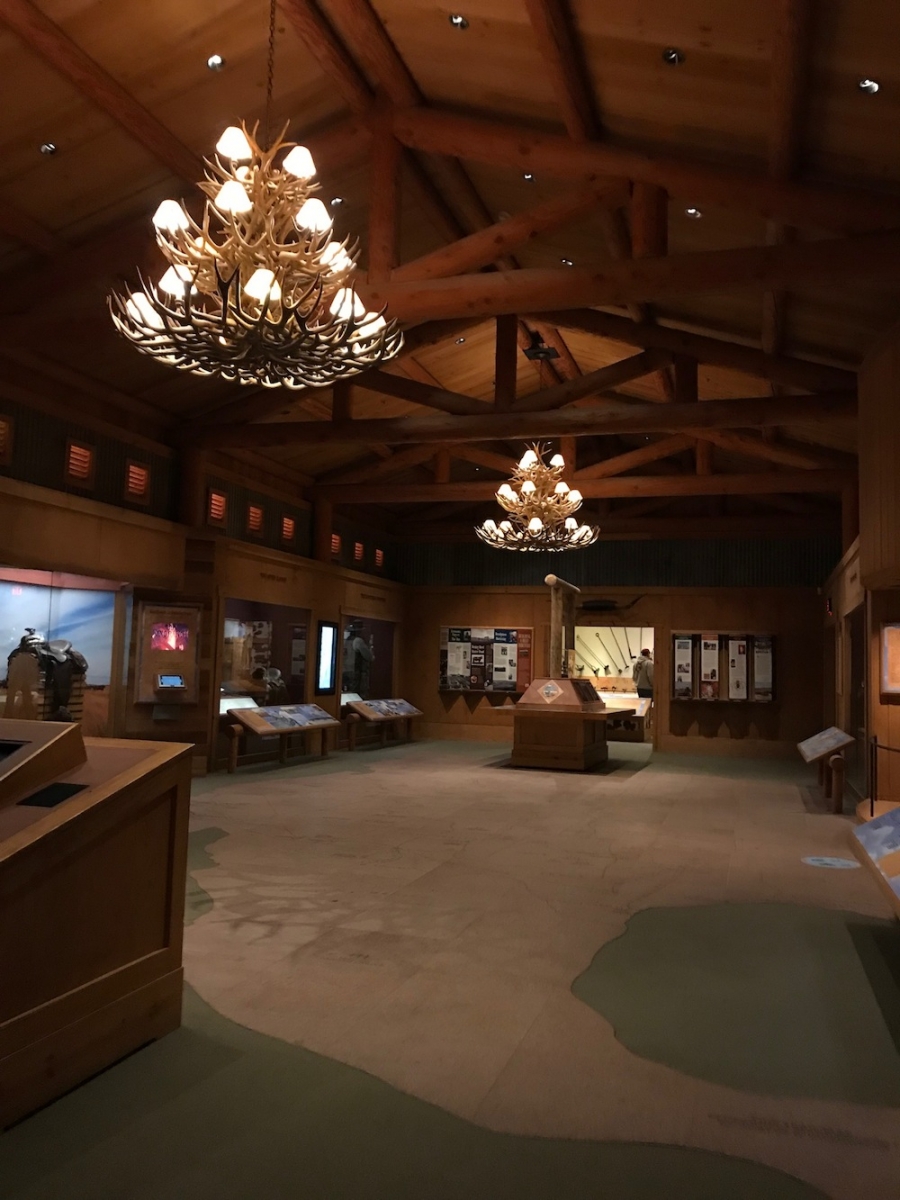 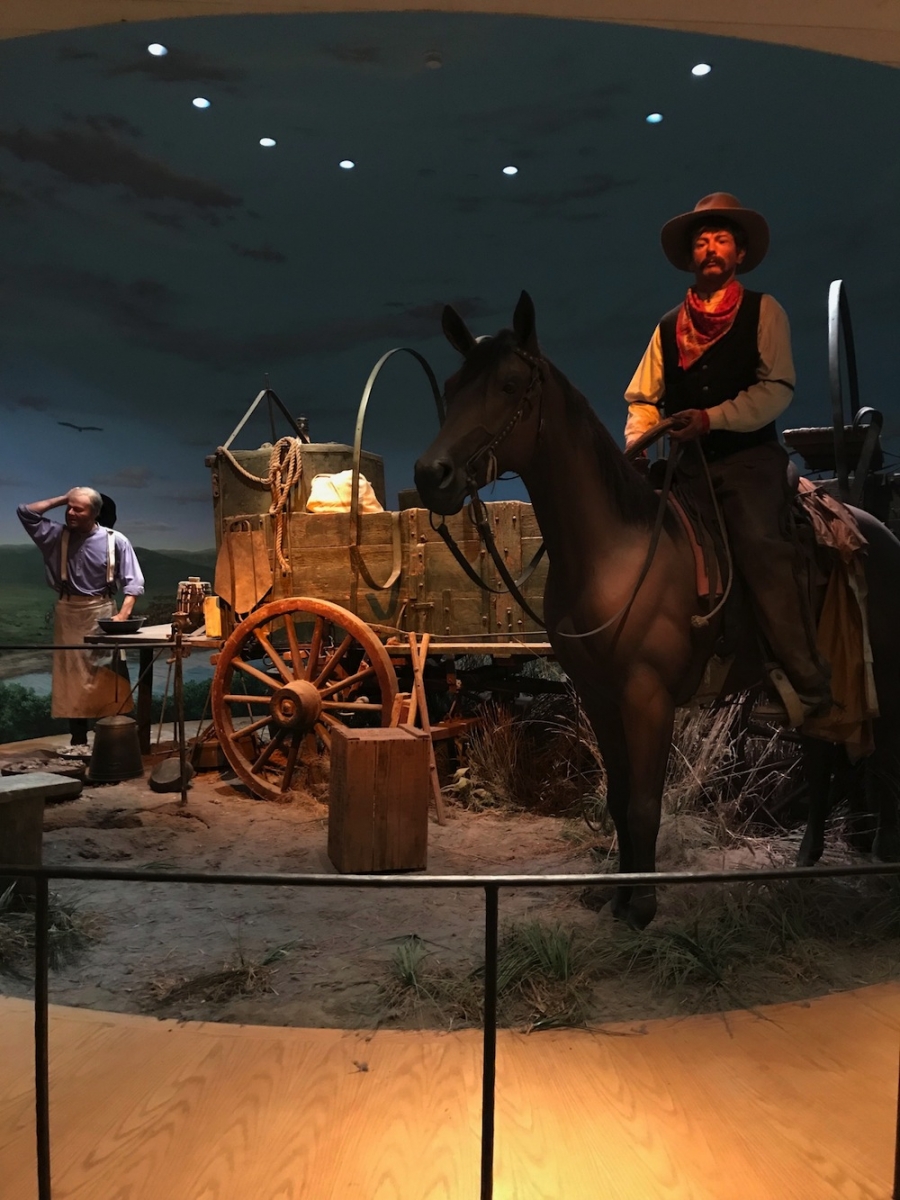 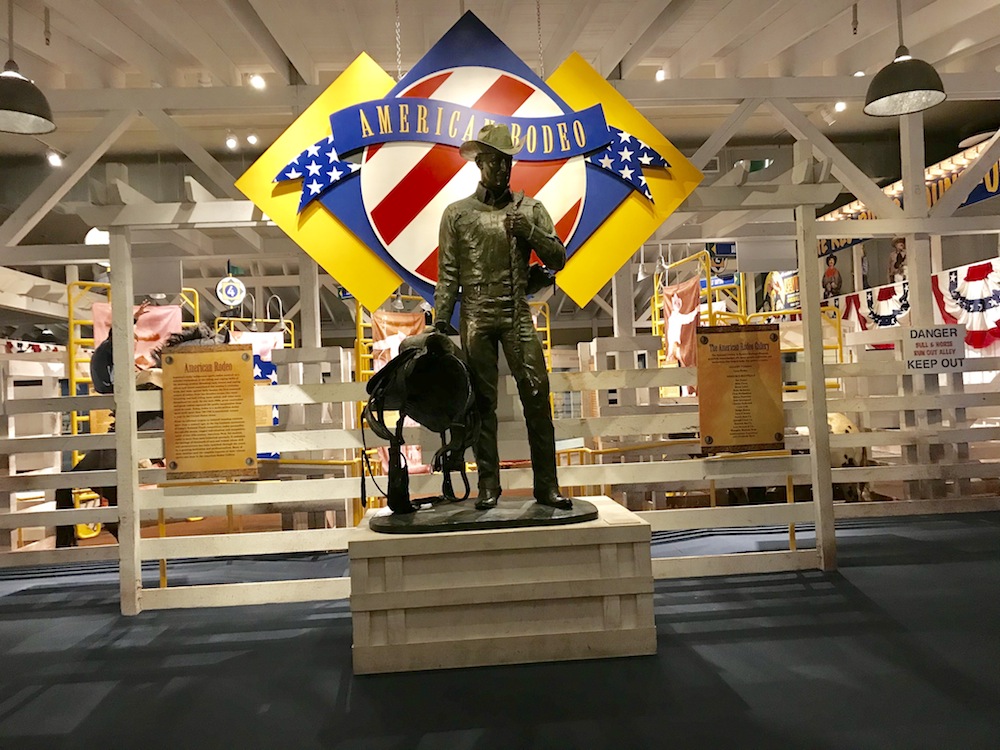 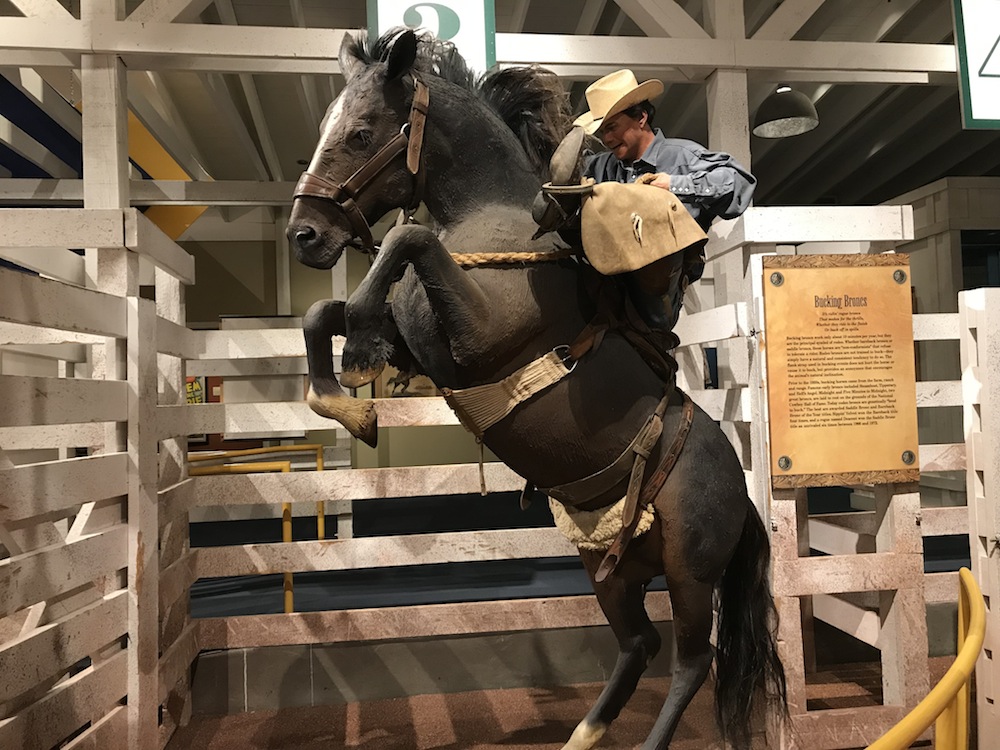 Because it was so chilly, we didn’t even try to go outside, although TulsaKids editor Betty Casey said she remembers that being another great aspect of the museum. However, the museum is currently working on installing a new attraction outdoors: Liichokoshkomo’, which is the Chickasaw phrase for “Let’s Play!”

Liichokoshkomo’ is scheduled to open in spring 2020, and will “will encourage children and families to explore Western heritage by examining differing viewpoints and historical perspective” through STEAM activities. Read more here and watch this video to get a better sense of the scope of this new project.

And that’s a wrap! My main recommendation when visiting the National Cowboy Museum with kids is to make sure you ask about the Children’s Corral! Even though it was closed while we were there, I still feel foolish for not realizing we hadn’t seen it yet, and it is such a large museum, even with the map it would have been helpful to ask for directions.

Has your family visited the National Cowboy & Western Heritage Museum? Did you get to experience the Children’s Corral–what activities there did your kids enjoy? 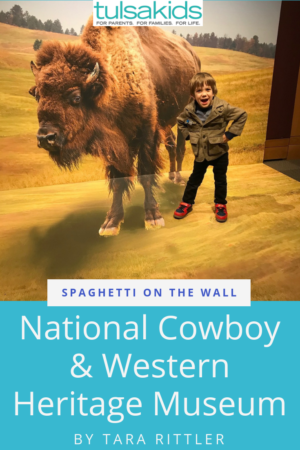 Making the Sale: Boy Scouts Popcorn and The Lemon-Aid Project