“We also had kids who were 8-to-10 years old bringing six or seven cents and asking what they could get out of the vending machine,” Durick said. “So I realized they didn’t have a solid concept of money, and a lot of them didn’t get an allowance.”

According to Ginny Hensley, vice president of communications at Tulsa Housing Authority, the children fill out a job application and take part in a mock job interview. From there, they are assigned specific tasks with the complex’s community center. The Kid Cash the children receive for their work can be redeemed for small prizes.

“It kind of branched out to where they have the jobs as well as companion classes called Kid Economy,” Durick said. “Right now, we have only two kid cashiers and the kid cashier store manager, but we’ll soon have a banker, a janitor and tutors.”

Although Durick expressed her enthusiasm for how far the program has come, she admitted that one of her greatest hurdles was in learning to be adaptable.

“At one point, the kids were getting fines if they did something and got in trouble,” she said. “We tried that for a while, but it was a little too much when I had new kids come in, so I’ve changed the program as need be throughout this whole process.”

Since Kid Cash’s inception, the prizes have become more extravagant, too – by the children’s standards, that is.

“When I first started, we just had little McDonald’s toys in a box, and now we have bigger prizes that help them learn how to save their money,” the site coordinator said. “Pokemon cards are the hot commodity right now – everybody wants those!”

This past December, the kids mixed things up and used their money on Christmas presents for their parents. Durick was pleasantly surprised by how much the kids were willing to share with one another.

“Even if they don’t have very much of their own cash, they’re always open to sharing with their friends or with another kid who doesn’t have any,” she said. “It’s been really nice and refreshing to see how much they’re willing to give, no matter how little they themselves have.”

It isn’t all about the prizes, though, for there’s been a conscious effort to promote financial literacy with this program.

“Some of the kids are very impulsive, but then they’re upset when the other kids get to buy the bigger prizes, so we’ve had a lot of conversations about saving,” Durick said. “They don’t always like it, but they learn, and now they are at a point where they’re putting their money together and saving as a group.”

That came as a big surprise for the site coordinator when it was time to buy Christmas presents for the kids’ parents, as she had to go back and buy a second round of gifts because of how much money they had saved.

Although a program such as this is an excellent way to foster a sense of financial literacy, kids who receive at least a semi-regular allowance can become just as knowledgeable with a little help from parents.

Janna Eremita, financial development officer at Oklahoma Central Credit Union, recommended that parents split their child’s allowance into three jars: one for their savings, one for disposable income, and one for a charity contribution.

“Through this, they will – at this really young age – learn how important it is to donate to a charity or a community cause,” she said. “That’s something that’s really taking off right now because I know my parents didn’t do anything like that – I got my allowance, and it was spent that day, you know?”

Eremita also encouraged parents to let their kids choose to donate to a charity that’s important to them.

Saving for the future is another lesson children learn from the three-jar method.

“Everything in our world today is so fast-track that it’s really vital for children to learn how valuable a savings account is,” she said. “For someone who has a part-time job, for instance, it is so simple – if you’re paid every week – to set back $25 a week – at the end of the year, you’re going to have a $1200 savings account.”

Sticking with the three-jar system, the financial development officer found a helpful tip for elementary and middle-school kids: If they want to buy something specific – maybe a hoverboard or a video game – then they should put a picture of that item on their savings jar to serve as a reminder of what they’re saving up for.

“People ask me all the time, ‘Well, how do I pay an allowance,’” Eremita said. “Some things – like doing the dishes – are just part of being a family unit. When you move out and live on your own, nobody is going to pay you to clean your kitchen – you do it because that’s where you live.”

She explained that expecting regular household chores to be done, while allowing children to earn money for extra tasks, will instill a sense of responsibility rather than entitlement.

As a teacher, Eremita said the most rewarding part of this process is when it finally clicks for the kids.

“I teach grocery shopping, and when we discuss buying generic items versus buying name-brand items, I talk on their level: ‘Well, if you went with the generic grocery item, then you’d have enough money to buy that skateboard,’” she said. “Then they go ‘oh, wait, I understand!’”

Another important element of the three-jar model is that it illustrates that children are still able to spend some money while they save up for something else. Everyone, even adults, loves to treat themselves when they get a paycheck.

“I teach Girl Scouts, too, and one of the things I teach the younger kids is needs versus wants,” Eremita said. “Every time I get with them, they say their needs are cupcakes and puppies and their wants are their house and groceries, so I break that down with them.”

Eremita also emphasized that old-fashioned notion of taking pride in one’s own work.

“When they’re given a task, a child should do the best job that they can so that they feel better about earning their money,” she said. “When you’re 16 years old and your parents buy your first car, you may not be super appreciative of it — when you have to save that money and buy your own car, though, you tend to value it a whole lot more.”

Even something as seemingly inexpensive as eating at a fast food restaurant or buying a pet can add up in the long run. Understandably, many kids don’t consider the medical or food expenses that come along with buying a cat or a dog. Discuss the expenses surrounding getting a dog with your children and write them down. Do the same with the cost of a car with your teenager. Allowing your children to discuss expenses with you will help them learn to budget and save.

“Something that’s nice about our society today is that we talk about savings and budgeting, whereas 20 years ago, it seemed to be a taboo subject,” Eremita said. “So now that people are getting more open with it, it’s great to let our kids know the general principles of that three-jar system.”

Like most important topics, teaching children about money management is not a single lesson, but an on-going conversation as children grow that adds up to financial literacy over time.

Tips for Giving Your Child an Allowance

An allowance can help your child learn to manage money at an early age. 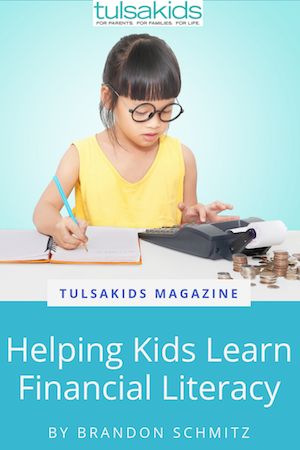