Celebrate by reading one of 2016's top 10 most challenged books, as reported by the American Library Association's Office for Intellectual Freedom.

Every year the American Library Association (ALA), ala.org, celebrates Banned Books Week, an “event celebrating the freedom to read.” In 2016, the ALA reported 323 challenges to books, and here are the top 10 most challenged as reported by the ALA Office for Intellectual Freedom:

8. Make Something Up: Stories You Can’t Unread by Chuck Palahniuk

6. Looking for Alaska by John Green

4. I am Jazz, by Jessica Herthel and Jazz Jennings; illustrated by Shelagh McNicholas

1. This One Summer by Mariko Tamaki; illustrated by Jillian Tamaki

The books that I have read on these lists have been good books – some of them like The Color Purple, Of Mice and Men, Bridge to Terabithia (which I read out loud with my middle school daughter), and To Kill a Mockingbird, to name a few, were amazing.

I don’t know, but I assume from looking at complaints about the books, that most of them were leveled by parents who were concerned about their middle school or high school children reading about LGBT characters, sexual situations, religions different from their own, offensive language, and the occult. I suspect that’s the reason many of the books on the lists of challenged books are young adult books – books that teens would be drawn to. Different is scary. Parents want to protect their children from being exposed to anything they deem questionable. But that’s the wrong way to think. If your values or beliefs are never questioned, then how do you defend them? How do you learn to understand others’ values, cultures and beliefs? 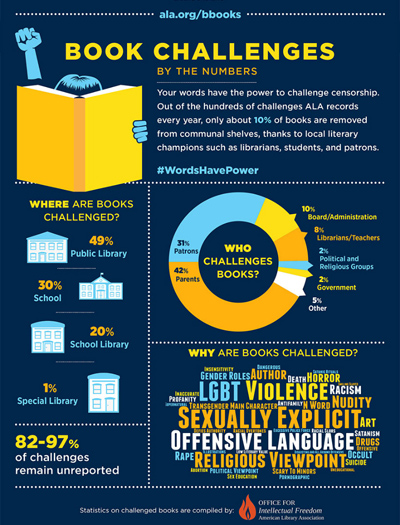 From each of the books I read, I learned something about another individual or group of people. I learned about the difficulties of growing up on an Indian Reservation. I learned a little something about what it’s like to work and try to survive on minimum wage. I learned about life in the South through a child’s eyes. I felt the horror of slavery. I imagined a future that I hoped would never materialize. I got a glimpse into the world of a child with an alcoholic parent. Literature allows us to feel and experience those things that we probably will never experience. I will never be a lesbian, but I can read about what it’s like to be LGBT so that I can understand my fellow human beings. Through narrative, we can come to a better understanding not only of other people, but also of ourselves, especially in those instances where we bump up against the unfamiliar.

What would be the point of reading books that only held up a mirror to our own lives? Or only provided a sanitized, happy version of something as horrific as war or slavery or ignored the dark side of human behavior — our ability to brutalize and bully one another?

In this divisive time where it’s so easy to find television programming or internet sites that echo our own views and opinions back to us, never challenging us to walk in another person’s shoes, it’s more important than ever to read stories of other people, other races, other religions. Stories are a non-threatening way to learn about life, history, ideas, cultures and even violence without having to experience it. In the pages of a book, we can learn compassion for those who have experienced violence; we can learn that we never want to relive the negative parts of our past such as slavery; we can learn to see people who are different from us as individuals, as human beings worthy of respect.

Take a look at the lists of banned books and pick one out. I would recommend any on the list that I’ve read. And if you question what your children are reading, read it with them, or read it for yourself – it can make for great discussions!

What are some of your favorite “challenged books”? I need some more recommendations.