Hamilton is playing at the Tulsa PAC through September 8

When Celebrity Attractions announced its 2018-2019 season, I considered gifting myself a season subscription somewhere in back of the balcony, just to make sure I didn’t miss this opportunity. Then, I decided I might as well just buy good seats to Hamilton for the same price, since Celebrity Attractions is very generous about offering us media passes to most of their shows (although we didn’t expect them for “Hamilton,” since it is so popular!).

When tickets finally went on sale, I put off spending the money. After all, I could listen to the soundtrack any time…and did I really want to see poor Hamilton watching his son die, breaking his wife’s heart, and finally facing his own tragic death?

All that to say, I got verrrry lucky because we did get a media ticket to last night’s performance of “Hamilton”! Yes, I went to the theater solo, but it was kind of nice! Just brought a book to read during intermission, and ended up sitting next to one of the sound engineers for the first part of the first act. He had a laptop from which he could control the sound–and, from what I understand, gets to travel around with the “Hamilton” tours making sure everything sounds optimal. What a great job!

And of course, seeing the musical in person is a lot different than listening to the soundtrack (I knew this all along, but was trying to make myself feel better about saving money…). There’s a lot of physical humor…Thomas Jefferson’s entrance is all swagger…and the dancing is incredible. Watching Hamilton rush around on stage with his head down really brings “Why does he write like he’s running out of time?” to life.

Also seeing the characters on stage helps make sense of the politics–Thomas Jefferson and James Madison dancing in sync, plotting Hamilton’s downfall. How Hamilton’s reluctant endorsement of Jefferson secured the latter’s Presidential victory–when all Hamilton wanted to do was stay out of the public eye, rebuilding his life and relationship with his wife following their son’s death.

I could keep rambling on, but here are three things that really stood out to me after seeing “Hamilton” on stage:

The Importance of Writing–Both Literally and Metaphorically

I knew Hamilton was a genius writer, but seeing the play made it even clearer just how much Hamilton accomplished through the written word. And, on the flip side, how he used his gift in a way that broke his wife’s heart and almost destroyed their relationship. This happened, of course, when he published a pamphlet going into great detail about his affair with Maria Reynolds, in an effort to keep his political adversaries from using their knowledge of the affair against him. Normally, I’d say it’s better to just come clean than allow yourself to be blackmailed, as Hamilton did–but he completely humiliated his wife in the process, and I don’t think (at least in the context of the musical) he talked with her before publishing the pamphlet.

I liked watching him come to the decision to publish, however: Hamilton agonizes over how to get out of the mess he’s in, not knowing when or how his opponents might choose to reveal his secret, and then he realizes–it’s his brilliance with a pen that’s gotten him to where he is, and that’s what he’s going to turn to now. As someone who works for a magazine, it’s encouraging to see just how much power the written word can have, when used for good.

Lin Manuel-Miranda is an authorial genius, too, of course. And as a nice parallel to Hamilton’s skill with a pen, he makes the idea of writing your legacy an important theme of the musical. The revolutionaries are fairly obsessed with their legacy. As George Washington says, “History has its eye on you.” Which is kind of an incredible thought–history certainly doesn’t have its eye on me; and while others may be making history every day, “Hamilton” reminds us just how revolutionary the Revolutionary War was–and the aftermath of setting up a new system of government.

More personally, Eliza Hamilton sings about “writing herself out of the narrative” after the publication of Hamilton’s scandalous pamphlet. Legacy isn’t important to her–all she wanted was a husband who came home at night and valued his family. And yet, in the musical’s finale, she sings about writing herself back in to the narrative–she is the one who not only preserves Hamilton’s legacy but builds a wonderful one of her own, establishing a home for orphans, being instrumental in the creating of the Washington monument, etc.

Different Ways of Dealing with Grief

I knew Hamilton and Burr’s relationship was central to the story, that they’d both come from similar backgrounds and that Hamilton was passionate and outspoken while Burr basically refused to give his opinion on anything, preferring to “wait for it”–to see who came out on top before casting his lot in with anyone.

But again, seeing this on stage helped bring this all into focus. Both men had been orphans, had at one point lost everyone they loved and been completely on their own. They were both driven to “rise above their station” and worked incredibly hard to do so, but Burr’s response was to try to control his situation by being overly cautious, while Hamilton’s was to try to control his by picking a side, supporting it with the full force of his brilliant mind and refusing to back down–to fight, fight, fight for what he believed in.

It was an interesting reminder of how childhood tragedy affects an entire life, and how people respond to tragedy and trauma in different ways.

The Value of Humility

Over the course of “Hamilton”‘s running time, you watch Hamilton grow from being a hot-headed young revolutionary, whose primary goal is to overcome his tragic childhood and rise to the top, to being a man who has face grief, learned to listen and compromise and to value relationships and rest. (Unfortunately, he still agrees to meet Burr on the dueling field when challenged, but at least he aimed for the sky. Still, there’s no part of me that understands dueling or that decision.)

George Washington, on the other hand, doesn’t undergo as much character growth because he is already a wise, father-type figure at the beginning, even if Hamilton doesn’t always appreciate it. Washington tells Hamilton early on that “It’s all right you want to fight: you’ve got a hunger/I was just like you when I was younger/Head full of fantasies of dying like a martyr…/Dying is easy, young man; living is harder.”

Immediately before this, you see George Washington’s agony over his command of the American troops: He can’t be in enough places at once; his men keep retreating instead of fighting; he is facing overwhelming odds, etc. etc. And yet he faithfully maintains his command, acknowledging his need for help and ultimately figuring out what needs to be done in order to win the war.

Then, he steps away from the presidency after two terms. I know, I know, this is elementary history stuff. But watching the reaction of those around him (and Prince George’s incredulous, “You can do that?!”) was a reminder of what a great leader Washington was. He realized he needed to step away in order for the United States to grow and strengthen, and was willing to do so.

The whole musical was also a good reminder of why we celebrate President’s Day, the 4th of July, etc.–because we have had some truly awe-inspiring leaders. And even though they had many flaws, our country was founded by passionate, brilliant thinkers who were willing to die for freedom and to establish not just a new nation but a new form of government that was intended to be better for the people being governed.

I know Hamilton could have used some serious self-care–and wasn’t the best father or husband–but watching him and the other early political leaders bicker, compromise, fight for their beliefs and ultimately found the United States–a nation also deeply flawed–was still inspiring. Mostly as a reminder to use the time we are given as best we can. To spend time with those we love, to work for justice and to take a stand for what we believe in.

Ooh, one final note: Moms Demand Action was outside the Tulsa PAC taking signatures for their petition to veto Permitless Carry in Oklahoma. If you want to add your name to the petition, click this link–they have a separate Facebook page set up to inform people how to do so.

Hamilton will be playing at the Tulsa PAC through September 8. There are still tickets left; get details here.

P.S. If monetary or other considerations are keeping you from seeing “Hamilton”–Gilcrease Museum is hosting a Hamilton Sing-along this Friday (August 23), with the Tulsa Opera as part of their monthly Gilcrease After Hours event. These events are geared toward an adult crowd, but from what I understand, kids are welcome–there just aren’t any kid-specific activities. See the event page here. 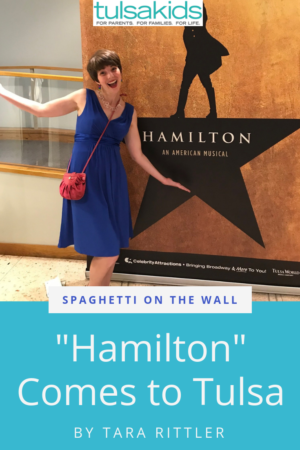