When I got divorced almost thirty years ago, I was devastated. It wasn’t anything I had ever dreamed would happen to me and definitely not something I wanted. I sought comfort from my parents, but they were so upset by my divorce they couldn’t offer much in terms of emotional support. I didn’t understand their feelings at the time; I saw it as MY divorce, and I was too myopic to see how it was impacting them also.

Divorce affects the two adults divorcing and the children involved, but the tentacles of divorce are long-reaching. For almost every couple divorcing, there is also extended family that feel the fallout from the split. The aftershocks of the divorce can reach through the entire extended family: aunts, uncles, nieces, nephews and cousins.

After my divorce, my daughters missed the cousins on their Dad’s side, and he and I both missed having a relationship with each other’s nieces and nephews with whom we had grown close. Although the entire extended family may feel the pain of the divorce, grandparents of the children are often the extended family who are most deeply impacted.

My parents loved my husband, had spent a great deal of time with him through the years and were very saddened by the divorce. They went through their own personal grief of losing a member of our family. In addition to mourning the loss of the man that had been her son-in-law, my mother also experienced a feeling of shame. Divorce was not acceptable in her generation, and she kept my divorce a secret from her friends and family as long as possible. My father felt anger towards my ex and a feeling of helplessness. He wanted to protect his daughter and grandchildren and make everything right, but it was beyond his powers.

I was very fortunate that I didn’t need my parent’s financial assistance, but knowing I had a safety net if necessary helped ease my money worries. My dad and I had an ongoing arrangement during my years as a single mom: he had a twenty-dollar bill laying on his desk, and if I came up short at the end of the month, I was free to take it. There were months I took it the day before payday, but I always replaced it the very next day. It became a joke between us, trading the twenty-dollar bill dozens of times during the ten years I was a single mom, but it was also a token of love from my dad and allowed him to feel like he was helping me.

I did rely on my parents more often for help with childcare. That could be looked at as financial help, but we put it in the category of adding stability and a feeling of security for my kids. My kids needed the loving haven my parents provided, an extra cushion of family love.

Assistance with childcare is the most common source of support maternal grandparents provide. A stressed-out single parent is fortunate if they have parents they can call on for help and the children benefit by having additional loving adults involved. Some grandparents may welcome the extra time spent with grandchildren, and some may see it as a burden. The additional care they are asked to provide may take them out of their preferred role as “fun” grandparents into more of a parental role, a task they thought was in the past.

In most cases, if it’s your son divorcing, you’re going to have to put in the work to maintain a good relationship with your daughter-in-law.  In extreme cases, grandparents may seek visitation rights to their grandchildren; rights vary from state to state.

Parents of the adult children divorcing are the forgotten casualties of divorce. Although I was surprised at the intensity of my parents’ emotions, I now see so many ways my divorce altered their lives and their grandparenting experiences with my children.

If your grandchildren’s parents divorce, do your best to keep the lines of communication open. Always keep in mind that the children’s best interests should prevail. Never say anything negative about their parents; there are always two sides to every story, and no one but the two people in the marriage know the complete story. Above all, be there for your grandchildren and provide the safety, security, and love they need. 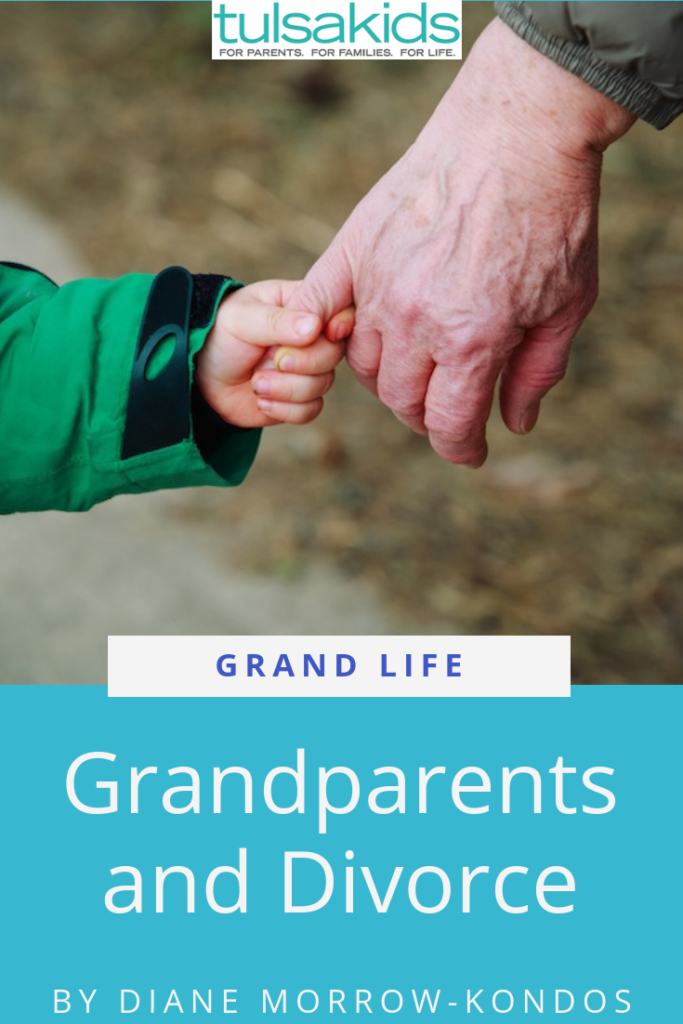