Parents may be surprised to learn how young children are when the love bug first bites. Many experts agree that most kids experience their first crushes when they are 5 or 6 years old. Sometimes young puppy love is focused on a celebrity, but other times it is on a classmate.

The first crush is actually considered to be a developmental milestone. Psychologists suggest that this is a way for young children to begin experimenting with the idea of loving someone outside of their immediate family. It is a first step in beginning to think about the eventual separation. If handled well, this can also be the beginning of talking with children about relationships. If parents laugh and tease children about these feelings, or try to tell them that they’re too young to feel this way, children may become embarrassed. This humiliation may ultimately prevent children from being open and honest with parents in the future.

Romance in the Classroom

Young romance is alive and well in my third-grade classroom every year. Neither the boys nor the girls appear to be immune to puppy love. I notice these young romances in my classroom when two students are consistently finding ways to interact with each other. There is a lot of giggling, blushing and a little twinkle in their eyes.

In third grade, having a “girlfriend” or “boyfriend” typically means nothing more than the children have feelings for one other that extend beyond friendship. I don’t believe there are generally even many phone calls or texts taking place. Third-grade romances seem to last anywhere from a few days to several months. By the time students reach fifth grade, they are texting and calling. They are also using social media, such as Snap Chat and Instagram, to communicate. Students say that they are “dating,” although there are no actual dates involved.

How Not to Talk to Kids About Their Crush

I have watched counselors, principals, teachers and parents tell students to quit thinking about such things. Children are told that they are too young to have these feelings, and to focus on their schoolwork instead. This always amazes me. Does anyone truly believe that telling children to stop having these thoughts and feelings will work? If someone told me to stop liking chocolate, it would have absolutely no effect on my love for chocolate. It might prevent me from talking to that person about my chocolate cravings, though. This is exactly what happens when parents tell their children to stop focusing on romance. Children will stop opening up about these feelings, but the feelings are still present.

Telling children to stop having these thoughts and feelings is not only ineffective, but it may have some other adverse consequences. Think about the messages these children are receiving from adults. Children may begin to wonder whether it’s abnormal to experience a crush. They could potentially believe that something is inherently wrong with them. These self-doubts could lead to a lack of self-confidence and a lowered self-esteem. Adults will not be successful in shutting down amorous thoughts and feelings. In my opinion, they will only be successful at shutting themselves out of this part of the child’s life.

Parents may wonder how to handle the topic of young romance. As a parent, and a teacher, I have never treated young love as a taboo topic. Therefore, I generally know who is crushing on whom. If a child shares with a parent that she is “dating” someone, or has a “boyfriend,” parents shouldn’t panic. Parents may want to ask some curious questions like, “What does it mean that the two of you are dating?” It’s likely that the parent will learn that things aren’t nearly as serious as it first sounds. It often means nothing more than she finds the other child to be cute, smart or funny.

Parents should use care to not poke fun or be critical. If embarrassed, this child may not wish to confide in the parent again in the future. Alternately, this may be a wonderful time to share stories about the parent’s own childhood crushes, which can create a terrific bonding experience.

If parents won’t make the topic off limits, they may even find the opportunity for some teachable moments along the way. It may be a good time to begin discussing what qualities the child finds attractive in others. This could possibly lead to important conversations about values. For example, a parent might begin by asking, “What makes Julie so special?” or, “What is it about Ryan that has you feeling differently about him?”

Both of my grown sons had several school-age crushes. I remember taking one of my sons and his first crush to see the movie, “Power Puff Girls.” This was all his idea. It wasn’t like a date, but like two little friends enjoying a movie together. I did find it thoughtful that he chose to invite her to a movie he thought she would enjoy.

When confronted with a child’s first crush, it is important to achieve a delicate balance. Adults shouldn’t make children think these feelings aren’t normal, or that they are silly. Parents need to show respect for the child’s feelings. On the other hand, parents shouldn’t overemphasize the importance of these early crushes in their child’s world. It’s just one small piece of the child’s life right now. This is just another developmental milestone. There are many more yet to come. 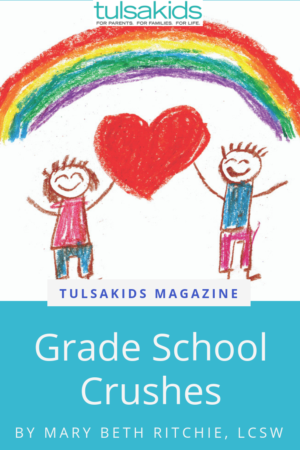