Giving Your Kids a Life-Long Advantage:

Be an involved father

It’s much easier to father a child than to become the dad that a child needs. The roles fathers play in parenting have changed significantly over the last few decades. In the past, mothers were usually considered the primary caregivers, while fathers were often judged by how well they provided for the family financially. As increasingly more mothers are pursuing careers, fathers are stepping up to play a more central role in parenting. The advantages of being raised with an involved father are numerous.

Just how important are fathers? Many studies have shown that having an involved father is as important to a child as having a loving mother.

According to a publication by the Child and Family Research Partnership at The University of Texas, a child with an involved father is 80 percent less likely to become incarcerated. This fortunate child is also twice as likely to attend college and to become successfully employed. Children with actively engaged fathers are also more likely to be successful in school, enjoying higher grades and lower chances of having to repeat grades or being expelled. Children with involved fathers are also half as likely to experience symptoms of depression in their adult years.

Children without actively engaged dads, on the other hand, may experience negative outcomes such as substance abuse, behavioral and health issues and school difficulties.

Having an actively involved father also contributes to an increased vocabulary in children. While mothers tend to use language already familiar to the child, fathers are more likely to introduce children to new vocabulary and concepts. Children with nurturing fathers experience many cognitive, behavioral, emotional and social benefits.

Children may also benefit from the differing parenting styles of mothers and fathers. One of the important contributions of the father may come as a surprise. Dads frequently play rougher with children, while mothers tend to focus more on children’s safety. This rough play can actually be helpful by encouraging children to take an increased number of healthy risks and fostering a sense of independence. In addition, fathers will often allow toddlers to experience a higher level of frustration than mothers before intervening. All of these behaviors actually lead to independence, confidence and improved problem-solving skills.

Fathers also can have an important influence on the ways that their children relate with others. Girls who are raised by an involved dad will be more likely to develop a positive opinion of men, and typically will have a better relationship with the opposite sex if they have had a consistent, positive male role model.

A son’s emotional health is equally impacted. Fathers have tremendous influence on their sons. Sons will grow up imitating the qualities they see in their fathers. A son will learn about relationships by watching how his father treats his mother. A son who witnesses his father being thoughtful, respectful, affectionate and kind to his mother will likely treat women similarly.

For those fathers reading this column, please know what an important role you play in your child’s life! Spend quality time with your children. Read to them. Play with them! Teach your children to play a sport or a musical instrument. Be a wonderful role model. Perhaps the best gift you can give to your children is a loving partnership with your significant other. Show your sons and daughters how to treat others with respect and kindness. Fathers, we appreciate you this month and every month! 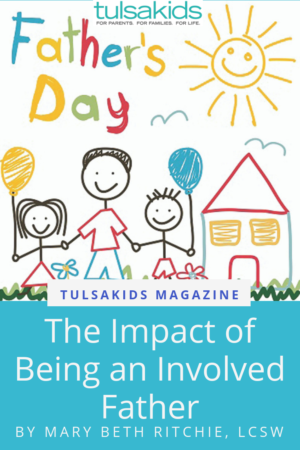