Girls on the Run Promotes Fitness and Healthy Lifestyle 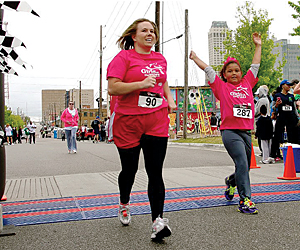 Girls on the Run participants

In 1972 Congress passed Title IX of the Civil Rights Act of 1964. The ruling, among other things, allowed for access to higher education to females, and granted women the ability to compete in collegiate sports. Even earlier than that, in 1900, women competed for the first time in the Olympic Games. American women and girls have had access to sports and competition for quite some time, and in Tulsa, many girls are finding their confidence through programs aimed specifically at them.

Girls on the Run is an afterschool program that began in 1996 in Charlotte, North Carolina. Melissa Baker, who oversees the Girls on the Run program for the Tulsa YWCA said that the program is now international, with some cities offering the training program to 5,000 or more girls every year. The Tulsa program began with McAuliffe and Gilcrease schools last year, and has added five more schools for the 2013 season.

Baker said the YWCA was interested in the program because it fit their mission to “eliminate racism and to empower girls.” According to her, the vision of Girls on the Run is to help girls become “joyful, healthy and confident,” through a twice-a-week, 90-minute, after-school talking and running session.

The program is 10 weeks long, and the next session begins in September at McAuliffe, Gilcrease, St. Pius X, Union 6th and 7th Grade Center and University School, which will include students from Kendall-Whittier, and Briarglen. Girls do not have to be students at those schools in order to participate, but not every school will allow outside students.

During the program, the girls are coached through a curriculum that begins with “positive self talk, self-image, team work and community,” Baker said. The teams also choose community projects to give back to the area. Last years’ teams raised money for a homeless shelter and for the Children’s Hospital. In the sessions, coaches lead the girls through conversations about gossiping, bullying, and how to navigate those tough middle school years.

All of the Head Coaches are women over 21, and they are all CPR certified. Assistant coaches can be 18 and either men or women, but Baker said that at this point all of the coaches are women. “And it’s entirely volunteer run,” she added.

Katie Gill Miller, director of health and wellness for the YWCA said that they saw tremendous growth in the girls.

“Shy girls grew into their own,” she said. “They reached out to become leaders in other areas.” Miller explained that before participating in Girls on the Run, the girls would not have dreamt of trying out for the school talent show or the track team, but many of them did just that.

The girls who enter the program do not always come from long and victorious athletic careers. Baker said that of the 16 participants at her school, only one had ever run, or done anything like running. She said that regardless of ability, everyone is accepted to the program. The girls get to talk about things they may not share in a co-ed PE or health class. They can talk about their diet and their self-image. They can even talk about how fast they are. Baker said that the girls told her at school the boys tell them they’re slow or they can’t run well, but in Girls on the Run, they are praised for their skill and allowed to feel pride in accomplishments. “They can be themselves. A little more independent,” in a single-sex environment, Baker said.

The program costs $150 and includes the 10-week training, two t-shirts, registration for a 5k event at the end of the season, a medal, a healthy snack at each session and a water bottle. At the end of each session, the girls run a 5K, either in the community or a Girls on the Run specific event. There are scholarships available and also a sliding payment scale.

In August, Girls on the Run is the charity partner for the Diva Dash, a 5K women and girls only run in Tulsa. In addition to receiving a portion of race fees, Girls on the Run hopes to increase awareness about the program and to find eager volunteers who can work with the girls. They need head and assistant coaches, running buddies and committee leaders. Anyone interested in the program can call Melissa Baker at the YWCA at 918.858.2347 or visit the website at www.ywcatulsa.org/pages/girls_on_the_run/.