In football, Griffin Boedeker is the kind of kid a football fan might describe as having “heart.”

But the Monte Cassino fifth-grader shows the same unabashed hustle and athletic courage this season in basketball, a sport that’s enjoying meteoric growth among Tulsa kids and in area schools, rec programs and gyms.

Credit the OKC Thunder’s success – or the ever-present visibility of NBA players on the Internet and TV. For whatever reason, roundball has never been bigger in Tulsa or more welcoming to a wide variety of athletes, from the lanky giraffe-like kids you probably remember from high school to newcomers and give-it-their-all multi-sport athletes like Griffin.

Boedeker, a striking turquoise-eyed kid with matching turquoise Nikes, never fails to astonish. His on-court moves, steals and surprise cross-court sprints win astonished gasps and whistles from both sides of any given cheering section. He gives basketball his all.

“This comes in handy because Griffin is only four feet four inches tall and 65 pounds,” says his mom, Ashleigh Boedeker of Tulsa. By contrast, the same team’s center is about a foot taller.

Griffin’s success underlines how broad the appeal of Tulsa basketball is today – and how all kids can experience its fast-paced benefits.

The success of players such as Thunder’s Kevin Durant has turned Tulsa parents and kids on to “the different workouts, training regimens and nutritional diets pro players follow,” said Jason Parker, the former Memorial High and University of Tulsa (TU) basketball player who now is leading athletics at Monte Cassino. Like scores of local schools across the Jenks, Tulsa and Union districts, Monte  Cassino this year turned basketball into a year-round sport for on and off season competition, skills and drills.

Kids committed enough to work extra time on basketball skills show “they have the willingness and commitment to work hard. Winning helps, but the main thing is that they are all having fun,” said Mayberry, who played such greats as Michael Jordan in his own notable seven-year NBA career and now watches proudly as his daughters move through college ball at TU and on to the pros. 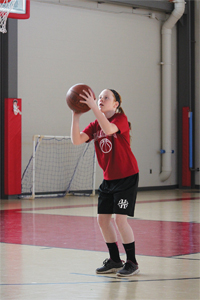 The benefits of basketball mirror those of team sports so far as leadership and social skill building go. But basketball, adds Mayberry, takes character. “There are a lot of good players out there. And when coaches have to make the difficult decision of which player to choose, a player’s over-all character often determines the outcome.” Character – that ability to identify correct actions and inspire others to follow suit — is critical in basketball.

“The most pivotal benefits of basketball are those that give players a leg up in the game of life,” adds Monte Cassino’s Parker. “Those include commitment, perseverance and the rewards that come from having to work closely with a team of a small group of players to serve a common goal.”

Improved overall coordination and mental focus are other key benefits, experts say. Dribbling, passing, rebounding, shooting and running use all the limbs of the body. Plus, “you need good hand-eye coordination for shooting – and you need good overall coordination for ball handling. Both develop with hard work. Concentration fits in during games because players are occupied by remembering plays, what defense to run, and who they’re guarding — all while running, dribbling, and passing the ball,” said Jody Keirn, mom of Grace Keirn, a student at Owasso Seventh Grade Center. “While growing, especially during adolescence, coordination is diminished in many kids as the body tries to catch up to the brain,” she added. But basketball narrows that delta – and also contributes to overall physical confidence, which often flags among pre-teen girls.

As for Grace, coordination is no problem. Watch her at a PWP practice and her physical ability is evident. She’s been playing on winning basketball teams since she chose basketball over soccer in the third grade. Grace now plays on Mayberry’s acclaimed grade seven girls team.

Grace, 12, makes the trek to Mayberry’s PWP twice a week for one-on-one and group training. Year-round skills and drills practice overseen by Mayberry or one of his top coaches make all the difference, says Keirn.

If your Tulsa kid is too engrossed with other activities to dig in to serious training like what Mayberry’s or gyms like Bixby’s Scores provide, summer and school break camps abound for basketball. One local favorite is Danny Manning’s basketball camp at TU.

Holland Hall sixth grader Hannah Johnson is an example of an athlete in another sport who plays basketball purely for fun. She’s played competitive soccer for Jenks and other teams for years. But every winter, she suits up to play with All Star, a rec league based at South Tulsa Baptist Church. Hannah, says her father, Tulsa attorney Andy Johnson, plays to win. Within days of transferring to Holland Hall from Jenks Intermediate in January, she was on the Holland Hall court.

“Especially at younger ages, I’m a believer in exposing kids to several different sports and, over time, allowing them to narrow down to their favorites,” he said. “Probably the biggest change with sports since I was a kid is there is much more specialization at early ages.”

With specialization comes a risk for burnout, coaches warn. If your child is in love with basketball or any other sport he or she easily can practice at home, make sure form and technique are mastered first.

PWP’s Mayberry says parents should be careful not to push kids too hard. And they need to follow the right safety guidelines.

“The best way to prevent injuries is to make sure kids use proper equipment when they’re young,” he said. That means playing on a good court. No concrete without knee pads. Proper clothing and shoes. And good fundamentals. Proper shooting, ball control and footwork go a long way toward preventing injuries, he said, adding that the good clothing doesn’t have to be top-end, show-off gear. There are lots of affordable options.

Got a younger kid? Start early. “Get a little goal that’s about two feet taller than they are. Watch them fall in love with the game. Sprinkle in a little bit of practice. But don’t overdo it or get upset when they revert to their own techniques,” Parker said. Eventually, you do want to create a culture of practice, a mindset that will benefit your Tulsa kid academically, athletically, musically and in other pursuits.

“Practice separates players from participants. It takes thousands of hours to develop the techniques that make a good basketball player. This can’t be accomplished by just going to a gym for a couple of hours a day and throwing a ball at a hoop. Techniques must be replicated in the same manner to form good habits.”

Basketball has never been a better option for Tulsa kids who love to get out there and play. The benefits are far-reaching – and there’s room for all kinds of skill levels and athletic types. Sure, the tall, skinny basketball giraffes you remember from your teens are still gracing courts all over town.