Family Fun at The Fair!

Say what you want about the fair, but all-in-all it’s a a good time.  Sure the crowd is, ummm…colorful, but unless you’re a germophobe, you’ve simply got to take the family.

We went yesterday afternoon/early evening and headed straight for the petting zoo.  After walking in, I quickly realized why my co-worker suggested going in the morning.  (Note to self: always listen to a woman who has three kids regarding least smelliest time at the Fair Petting Zoo.) Because let me tell ya, the stench can take you back for a minute. But after you get used to that, it’s not bad at all.

To actually get into the Petting Zoo is free. You can buy food to feed the animals, which is $1 for a small and $5 for a large. There are cows, zebras, tons of goats, pigs, a porcupine (no petting allowed- duh), chicks, bunnies, I could go on, but I’m not sure what the others were actually called.

From there, we moved on to the Birthing Center. I was skeptical to say the least, but it’s pretty freaking cool in there. What is it about little piglets? They’re just the cutest little things. Oh and they’re not kidding about it being a birthing center. They actually have mirrors and even surgical tables so that you can see as much as you can handle. We even witnessed a little chick being hatched. My 20-month-old was totally into it.

As we walked out, we paid $5 to let the little guy ride his first horse (or miniature horse). He loved it and the people working there were very nice and accomodating. 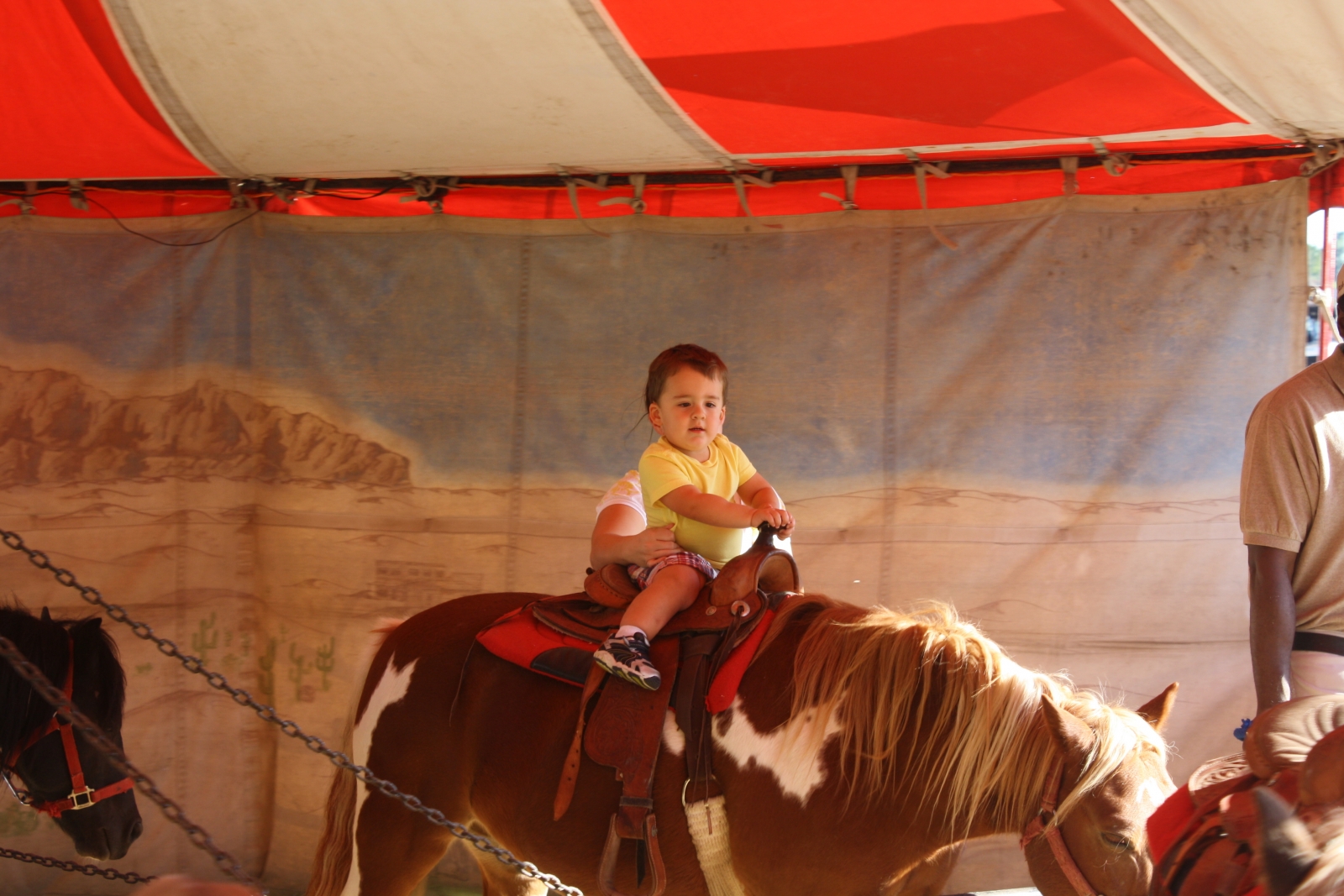 In the photo, it looks like he’s riding it by himself. Yea, right. I was to the side of him making sure he wouldn’t fall.

From there we went to get our fair food (because isn’t that the real reason we all go to the fair?) This is the only bad part of the evening. I was completely committed to standing in line to wait for a corn on the cob and then got swayed by the shorter line for the curly potato chips. I had food remorse for the rest of the evening. I should have waited out for the corn. Dang, I hate it when that happens!

Once we got home, we did our usual evening ritual and when it came book time I reached for the Barnyard Bash. For the first time in a long time, he was interested in animals others than cows. He was pointing at the dotes (goats), iggssss (pigs), and nays (horses). Such a refreshing change from the ever-constant moooing that is starting to make me have a slight twitch.

So it’s a fun, entertaining, learning experience for the the whole family and I hope you are planning on making a trip out there the next week or so. Don’t let the crazies keep you away (because they are definitely there)!