On September 6, TulsaKids Editor Betty Casey and I were privileged to be able to attend WICKED at the Tulsa PAC, courtesy of Celebrity Attractions. “The Wizard of Oz” is, of course, an important cultural touchstone for native Kansans such as myself; but while I had often tried to sing along with Idina Menzel and Kristin Chenoweth on various tracks on the original WICKED soundtrack, I had never seen the musical before (and looking up the plot on Wikipedia will make you scratch your head and go, “Whaa….?” But don’t worry, on stage it all comes together.).

If you are unfamiliar with WICKED, which has been touring for fifteen years(!), it provides a backstory to “The Wizard of Oz,” from the perspective of Galinda/Glinda the Good and Elphaba, who becomes the Wicked Witch of the West. Galinda is the epitome of the popular girl–she flirts, has the hair flick nailed down, expects to get her way in all things, etc. Green-skinned Elphaba is an outcast–students visibly cringe when they see her. Moreover, her father is ashamed of her and she only ends up at the magical school because her father wants her to look after her younger sister; despite the fact that Elphaba has considerable magical power.

While Galinda begins the musical as self-centered and ambitious, Elphaba is immediately concerned when her favorite professor, a talking goat, confides in her that talking animals all over Oz are being stripped of their rights–which in turn causes them to lose their power of speech. A scene or two later, this professor is told he can no longer teach at the school and is forcibly removed. Long story short, Elphaba ends up getting to meet the Wizard of Oz with Glinda, hoping to bring the plight of the animals to his attention–but during her interview, she realizes that the Wizard himself is responsible for this, having determined that the best way to unify the humanoid Ozians is to give them a common enemy–the animals. Before she realizes this, however, the Wizard tricks Elphaba into using a mysterious and powerful spell book to create flying monkeys; Elphaba is horrified when she realizes that the wings hurt the creatures and that the Wizard just wanted to use them as spies. From there, Elphaba pits herself against the Wizard, determined to save the animals of Oz. Forces against her control lead her to turn a Munchkin Boy into the Tin Man, a handsome prince into the Scarecrow, and a rescued lion cub into the Cowardly Lion.

Through all of this, Galinda and Elphaba become best friends, even as Galinda aligns herself with the Wizard, leaving Elphaba to fight him alone. Galinda learns to think of others beside herself and eventually realizes that the Wizard and his cronies need to be overthrown for the good of Oz. Elphaba realizes that Galinda’s status as a popular figure makes her the ideal person to truly unify Oz, and in the end, Elphaba leaves Oz so that Galinda can use her power and influence for good without being hindered by her association with the so-called Wicked Witch of the West.

Does that make sense?

Anyway, some lessons from WICKED that struck me include:

1. “Some Things I Cannot Change, But Till I Try I’ll Never Know”

This line is from my favorite WICKED song, “Defying Gravity.” Elphaba sings this as she comes to realize that her dreams of working with the Wizard are untenable–that she must forge her own path if she wants to help the animals of Oz. I just love the acknowledgement in this line that failure is always a possibility–and in a way, Elphaba does fail–but that it’s still important to fight for justice and change.

Plus, once Elphaba comes to realize that, due to the Wizard’s lies about her, she is limited in her ability to affect change, she is able to step back and encourage Glinda to do what she tried and failed to do.

2. It’s Easy to Manipulate People When They Don’t Have the Full Story

At one point, the Wizard says something to the effect of “Truth is what people agree is true.” And one of the primary villains, Madame Morrible, becomes the Wizard’s press secretary, making sure the Ozians continue seeing the Wizard as their wonderful savior and convincing them that Elphaba is wicked. Because the Ozians don’t have the backstory as to why Elpheba turned the monkeys into flying monkeys (the initial basis for the charge of wickedness), it’s easy for them to believe that she is evil.

The message here is that before you grab your figurative pitchforks and go on a witch hunt, make sure you have all the facts. If you’re only getting one side of the story, and especially if it comes from people in power, you quite possibly don’t. (See my next blog post that reviews “Just Mercy” by Bryan Stevenson, a look at the U.S.’s mass incarceration system.)

3. Sometimes The Best Friends Can Be Those Different From You

WICKED is a story of a powerful female friendship, and this is best evidenced in the song, “For Good,” in which Elphaba and Glinda acknowledge that they both believe their friendship has changed them for the better. “So much of me is made of what I’ve learned from you,” sings Elphaba. At another time, Glinda admits that, while she’s had many friends, Elphaba is the only one that has mattered. True friends encourage growth in each other–and this may go hand-in-hand with some friction.

I also love that, though Glinda, Elphaba and Fiyero find themselves in a love triangle (see below), Glinda ultimately is able to accept the fact that Fiyero doesn’t love her, and instead of remaining bitter (not that she’s not furious at first!) wishes the best for both Fiyero and Elphaba.

Both Galinda and Elphaba’s sister Nessarose are excellent examples of how NOT to treat the person you’re in love with; and the men they love, Prince Fiyero and the munchkin boy Boq, respectively, are excellent examples of why you should be honest about your feelings. Galinda forces Fiyero into an engagement (by surprising him with an engagement party), despite the fact that she’s complained to Elphaba previously that he seems distant and she’s not certain he’s perfect for her anymore. Fiyero, meanwhile, has been falling in love with Elphaba, but doesn’t have the courage to admit this to Galinda.

Boq asks Nessarose to a dance in order to please Galinda, and though he tries early on to confess that he only asked her because he loves Galinda, he feels guilty and ends up in a very unhealthy relationship with Nessarose, becoming her enslaved butler-of-sorts after they leave school. When he finally, finally tells Nessarose how he really feels, she goes mad and tries to use Elphaba’s spell book to literally steal his heart.

The moral of the story is: If you think you’ve met the person of your dreams–but they doesn’t feel the same way–you probably haven’t. Don’t give into the desire to manipulate for yourself a happy ending. Just let it go and move on. As someone who may have had a teensy bit of a problem with this in the past, I can just say that life is better if you don’t get hung up on thinking you JUST HAVE TO BE WITH [INSERT NAME HERE]!!!!! 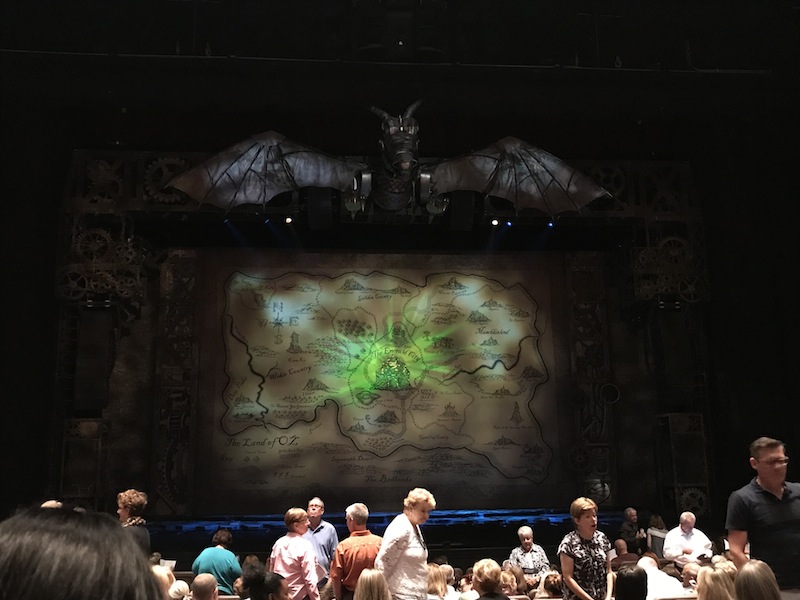 Poor picture, but…there’s a GIANT MOVING DRAGON over the stage, and with glowing red eyes!

WICKED is a complex musical–so these are only some of the themes therein. And, beyond its powerful messages, WICKED is a lot of fun to watch; the sets and costumes are jaw-dropping amazing, as is the cast. Ginna Claire Mason is a perfect Galinda, and I could listen to Mary Kate Morrissey’s Elphaba sing all day. Watching her transform from an awkward schoolgirl into the Wicked Witch of the West, despite her best intentions, is chilling and tragic.

WICKED is playing at the Tulsa PAC through September 23. Get tickets here.