Our December issue will include a feature article about Tulsa being a compassionate city.

In June, Mayor Dewey Bartlett and the Tulsa City Council joined together to adopt a resolution designating the City of Tulsa as a “Compassionate Community.”

“Adopting this resolution as a city confirms our commitment to living out compassion in all aspects of life,” Mayor Bartlett said. “Tulsa is already known as a friendly and welcoming city and compassion will continue to promote peace and attract a diverse population that already makes Tulsa very unique.”

The Tulsa Human Rights Commission and the Tulsa Interfaith Alliance worked to create the “Partnership for a Compassionate Tulsa” with the goal of implementing a 10-year strategy in business, education, health, civic, neighborhood and faith organizations and individuals.

What happened to these words? What happened to Tulsa’s compassion? Mayor Bartlett drafted a letter to President Obama, urging the United States to turn its back on Syrian refugees, half of whom are children.

The dead toddler on the beach, which quickly became the symbol of the plight of these refugees, has been replaced with pictures of terrorist bombers in Paris, a symbol of our collective fear.

Do we let fear overtake reason and compassion? Do we allow it to change our values as United State’s citizens? The backlash against the refugees is understandable, but not reasonable. In fact, what happened to the innocent people in Paris is the scenario that the Syrian refugees are trying to escape. Here is something to consider “Syrian Refugee Puts Paris Attacks Into Perspective In One Simple Sentence” and this “6 Reasons to Welcome Refugees after Paris.”

Governor Fallin has joined half a dozen other state governors in protest of plans to allow 10,000 Syrian refugees into the United States. Mayor Bartlett, representing Tulsa, has joined these governors. Here is his letter: 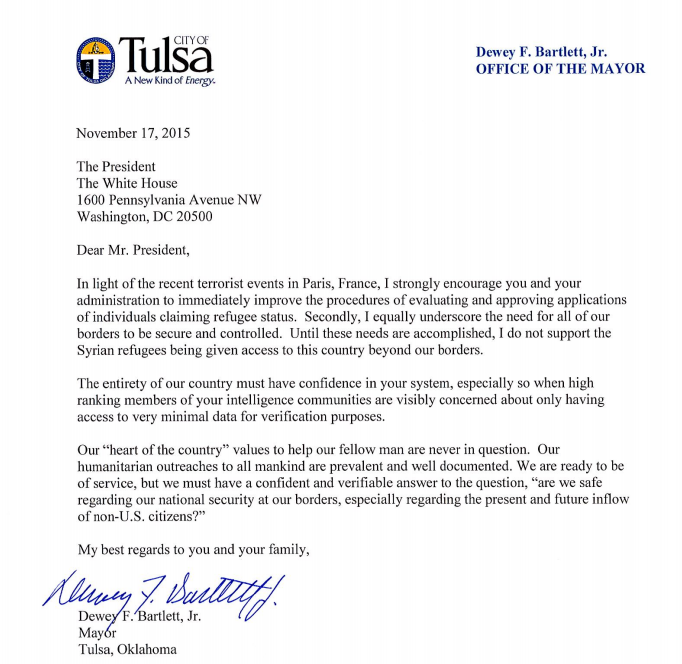 I found Mayor Bartlett’s rhetorical choice of the second person “you” throughout the letter to be interesting. In addressing Obama, his rhetorical choices cast him as an “other,” as if he is not a part of the collective government, which is “us.” He points to “you and your administration,” and says “our country” but “your system” and “your intelligence communities.” In other words, the tone of the letter is that the country is ours, the borders are ours, but “we” don’t trust “you” (Obama) to follow national security protocol. Mayor Bartlett’s letter has also muddied the waters by combining war refugees and illegal immigrants.

Before we paint the refugees as terrorists in disguise who are slipping, undocumented, through our porous borders, shouldn’t we understand the extremely lengthy (approximately two-year) process that a refugee must undergo before being admitted into the U.S.?

Compassion isn’t merely a word or a pleasant-sounding initiative to put on our Chamber of Commerce letterhead. Compassion is a purposeful acting out of our values, which takes mature reflection and a sincere desire to understand one another. Compassion cannot be co-opted by one political party or another. If we, as a city, a state and a country, can fearlessly take compassion to heart and be that example for our children, we’ll all be better for it.