I had two clowns in my office this afternoon. No, not my co-workers. They were real, live clowns from the Ringling Bros. and Barnum & Bailey Circus. One of them, Victor Rossi, is from France and the other, Asa Walker, is from Kansas. Both will be performing in the circus at the BOK Center this weekend. The first show is on Sat., March 31 at 3 p.m., followed by one at 7:30 p.m. and then on Sunday, June 1 at 5:30 and 7:30 p.m.

The pair of pared-down fellows were giving me the low-down on circus life. It was kind of a warm up to my own “Greatest Show on Earth” – I was invited to be the Guest Ringmaster on Saturday afternoon. I’m pretty nervous about it, but the clowns assured me that even they get a little nervous, too, right before the curtain opens. But once they’re in front of the audience, it’s all about the show.

Victor Rossi comes from a long line of circus performers in Europe – eight generations! He said the first performer in his family was a court jester for the King of France. Both of his parents were clowns, so he grew up touring throughout Europe with the circus.

Being a mom, of course I asked about how he went to school if he was traveling all the time.

He said that school for traveling performers in France is similar to on-line or correspondence learning, called Cned, The National Centre for Distance Education, which is provided by the French department of education. 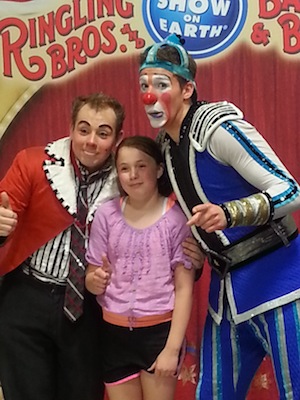 Asa Walker’s background, on the other hand, couldn’t be more different from Rossi’s. Walker is from a large family in Kansas. He was homeschooled in the elementary years, and started acting in fifth grade.

“I did theater through high school and got a scholarship to Independence Community College,” he said.

After a stint in California, Asa said his brother, who worked concessions for the circus, got him a job. Not long after that, Asa was auditioning for clown college with Barnum & Bailey Circus, got accepted and was offered a job as a performer.

“It’s very cool,” Asa said. “It’s specific and, in America, an unrecognized performance style. I’m doing what I like in life.”

And, after spending some time with professional clowns, I can attest to the fact that clowns are funny even without their make-up and clown regalia. They can even be somewhat philosophical about comedy and what makes us laugh.

When I asked them what makes them funny, both Asa and Victor were quick to point out that a silly suit and a red nose do not make the clown. Understanding humor, connecting with the audience quickly and being authentic make the performances successful.

“You cannot learn to be funny,” Victor said. “You are funny.”

Each person has different traits. Some may be cool and quiet; others may be nervous. A clown might use those characteristics, making them clear to the audience, but never ridiculous. “Ridiculous is the worst thing that can happen with comedy,” Victor said.

Above all, clowns make people laugh. “People go to the circus to have fun,” Victor said. “Comedy is a way to entertain and amuse them. It’s an escape from problems.”

“The story of the circus is that it’s a world that’s not real,” Asa said. “But for two hours, you’re going to this place that becomes real. Clowns usher you into that world.”