Are You Ever Too Old to Feel Orphaned When Your Last Parent Dies? 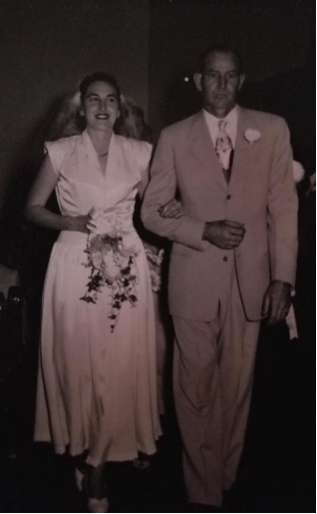 They’ve been gone ten years, but I still miss them.

My grandmother unexpectedly died when I was 28 and pregnant with my first child. I grieved for my beloved grandmother. It was only natural that my mother was deeply affected, but her intense, prolonged grief was what I didn’t expect. My mother was in her early 60s at the time, about the age I am now, but I was looking at it from young, selfish, and inexperienced eyes. I remember thinking, “Well, she was in her late eighties. You’re in your sixties; isn’t this what you expected?” Fortunately, I knew enough not to express those thoughts, and I showed compassion (I hope) to my grieving mother.

Now that I have experienced my parents’ deaths, I understand my mother’s strong emotional reaction. There is no age limit on grieving the loss of your parents. It doesn’t make logical sense, but no matter how old we are when the last parent dies, we feel like an orphan. If the natural order in the cycle of life is followed, our parents will die before we do. Our minds understand this, but what we know intellectually doesn’t always transfer to how we feel. Our parents’ deaths are life-altering.

My parents were fifteen years apart, yet they died just a year apart. When my parents died, I was in my early fifties. I was all grown up, and even my children were grown, so I should have been emotionally prepared to deal with their deaths. I wasn’t. My mother’s unexpected death, coming so soon on the heels of my father’s death, knocked me for a loop. Because I was the executor of the will and took over guardianship of my brother with intellectual disabilities, the busyness of taking care of necessary details allowed me to delay mourning.

The finality, the intense grief, hit me when I began preparing to sell the house they had lived in for my entire life. I didn’t want my mom’s collection of spoons from every state and country she had visited, but how could I toss aside something she loved? My parents had built the house with their own hands, nailing each board in place, and slapping mortar between every rock. They had invested years of hard work and love. It wasn’t financially realistic to keep the house, yet selling it felt like giving away my parents’ baby. 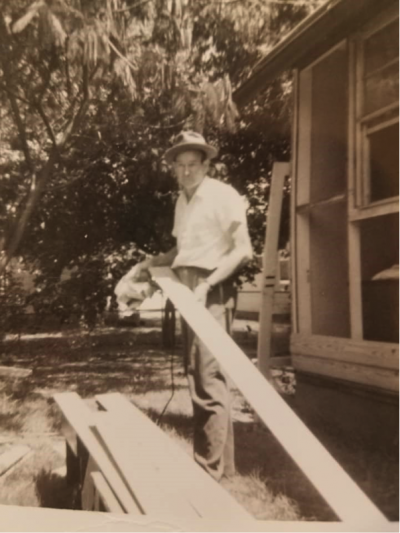 My dad building the house in the evenings and on weekends. A work of love.

Canceling my parents’ phone was an unexpected trigger of sorrow. The simple act smacked me right in the heart and forced me to stare reality in the face. They weren’t coming back. I could still envision my mother sitting at the kitchen desk, the heavy black rotary phone her link to her far-away family and long chats with friends. My parents’ phone number was RI-34697 for fifty years. It’s a number forever tattooed on my brain, but no longer would I be able to dial that number and ask my mom how to make potato soup or get the stain out of a shirt. Months of suppressed sorrow escaped as I sobbed my explanation to the stunned man at the phone company. I’m sure when he went to work that day, he didn’t expect to be thrown into the role of grief counselor to a hysterically crying woman.

As I went through their house and their lifetime of accumulations, memories overwhelmed me. The house was a simple rock structure, but it represented my childhood and was the physical embodiment of my parents. Even after I was off to college, adulthood, and owned my own home, that rock house with the big front porch was still home in my mind. As Robert Frost said, “Home is the place where, when you have to go there, they have to take you in.”

When your parents are no longer on earth, there is a feeling of home being gone. I was never homeless, never even close, yet when they were gone, it felt like my backup plan, my “just in case I run into hard times” plan, ceased to be. My soft place to land in a hard world was gone. My “home” died with them.

A Loss of Childhood

The last parent’s death represents the end of an era, the final goodbye to our childhood. That sounds ridiculous to say when your high school graduation is 40 years in the rearview mirror, but feelings don’t have to make sense. The people who remembered your first steps, the people who taught you to drive, the people who loved you through every awkward stage, and loved you even when you didn’t deserve it, the people who gave you life are gone. The people who witnessed your life and gave you a cushion of unconditional love are gone. If there was conflict in the relationship, the deaths might be even more traumatic because the hope for resolution dies also.

When your parents have died, you no longer have the invisible safe zone between you and death. It was merely an illusion, children sometimes die before their parents, but the buffer felt real. As long as my parents were alive, I wasn’t next in line for death. Their existence allowed me to remain in denial of my own mortality, a Peter Pan existence. When I was someone’s child, I could live in a pretend extended childhood that allowed me to feel young.

Things are never the same after they are gone. Without our parents as a shared connection, my siblings and I don’t get together like we used to. There is no “other” home I can pop into uninvited and paw through the refrigerator and then lounge on the couch, chatting with the two people who knew me forever. The link to the past is severed, and any family stories I didn’t write down may be forever gone or altered by my faulty memories. My mother, their great-grandmother, is only the beautiful woman in the picture, a mythical creature to my grandchildren. 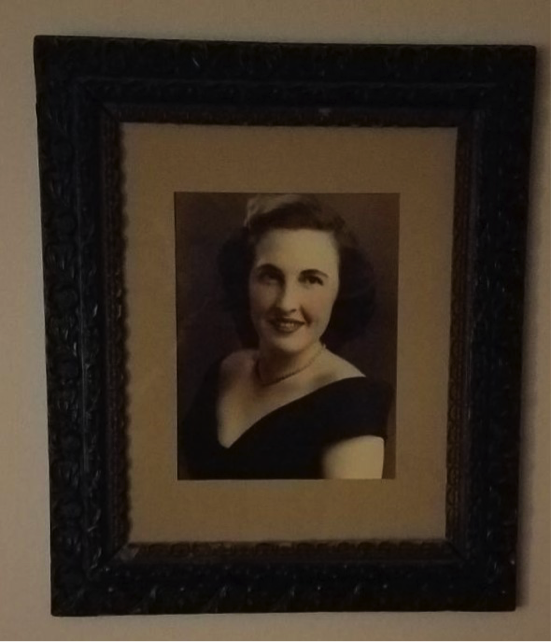 This picture of my mother hangs in our house. I tell my grandchildren about their great-grandmother.

My husband watched me go through the pain of my parents’ deaths. He was my shoulder to cry on and an ear to listen to my ongoing sadness. I tried to prepare him for what his parents’ deaths would mean, but I should have realized there is no way to be ready. His parents lived into their late 90s, his father dying in November of 2020, just a few weeks shy of his 99th birthday.

We recently made our final trip to my husband’s childhood home before the new owners took over. I watched as my 65-year-old husband went through the remnants of his parents’ lives. My husband’s life flashed across his face as he walked slowly through each room and gently sorted through artifacts from his long-ago boyhood – an old, rusty Tonka truck, a chess game, a Dick and Jane school book, and his high school letter jacket. It was painful to watch him try to process his parents’ loss and the end of his childhood.

As I tried to help my husband, the ugly voice inside of me wanted to say, “I told you so.” But I know there is no way to make someone understand the crater-sized hole the death of their last parent creates.

The death of our last parent hits most of us hard. We mourn as long as we need to. We talk about them to whoever will listen. We find ourselves unexpectedly crying at random moments for years to come. We take the tangible mementos that spark intangible feelings and leave the rest behind. We never get over it, but we focus more on the love we shared as time passes. We give thanks that we once had parents who are worthy of grieving their loss. 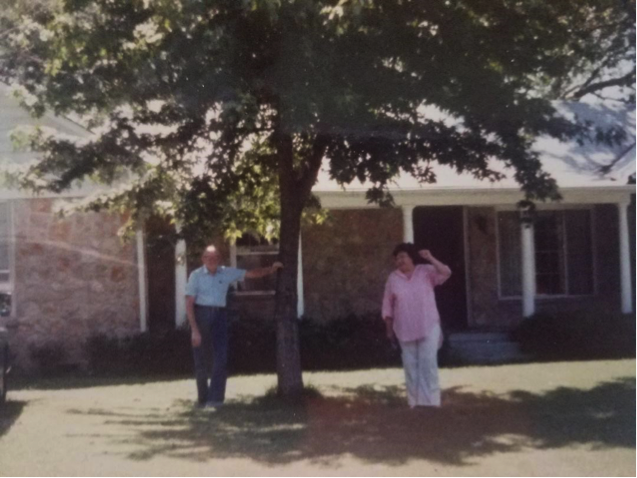 My parents in front of the house they built, my childhood home

I miss the old rock house
Every inch of it forever imprinted onto the blueprint of my memory
The wooden porch where my sisters and I went to escape the heat and chores
Rivers of purple running down our tanned arms as we devoured icy-cold popsicles
The cool dirt cellar our refuge as dark funnels of clouds barreled through Oklahoma skies
Hiding in the womb of the musky cave as winds spun above, leaving destruction in their wake
The kitchen wore an apron of gold Formica countertops, a scarred wooden table resting on worn linoleum floors
Bickering, laughter, late-night secrets, and shared meals pumping life into the heart of the home
The rusted metal barn where I gathered eggs at daybreak, carefully sneaking past the mean red rooster
Hiding in the dark shadows of the barn to smoke my first cigarette, to kiss my first boyfriend
The sleeping house awakened each day by a staticky transistor radio and our parents’ morning murmurs
Pungent aromas of coffee and bacon invaded our dreams, luring us from our nests of warmth
Simple lives punctuated by neighbors visiting after church on Sunday afternoons
Sharing potluck suppers and fence lines
Barefoot kids running wild and free, playing tag and riding bicycles in the day
Catching fireflies and sleeping on screened-in porches during starlit summer nights
Howls of coyotes and calls of hoot owls our bedtime lullabies
The old rock house and memories merge, their tentacles intricately entangled
Fifty years of snapshots blurred to form a montage of an ordinary but savored life
Time took its toll on the house, leaving leaking faucets, shifting foundations, and squeaking doors
Time took its toll on the people, leaving graying hair, failing memories, and frail bodies
We believed our parents would always be there, time standing still between our visits
Our brain tried to warn us, but our hearts refused to pay heed, stubbornly clinging to comfort
Mortality is the victor, taking one generation and leaving the next with a heartbreak that never heals
I miss the old rock house
I miss the people that transformed it into a home 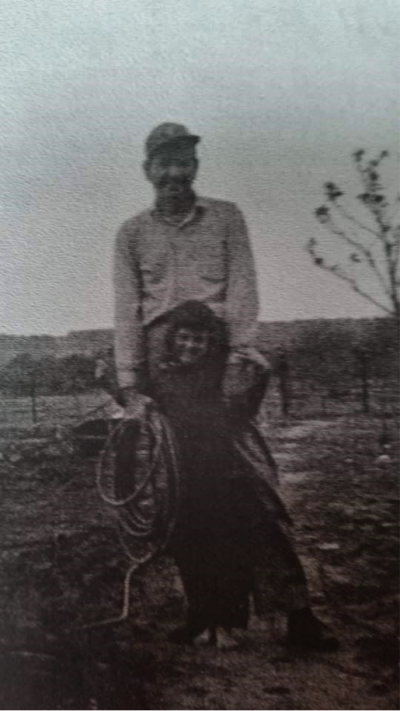 My dad and me in our backyard with Turkey Mountain in the background. 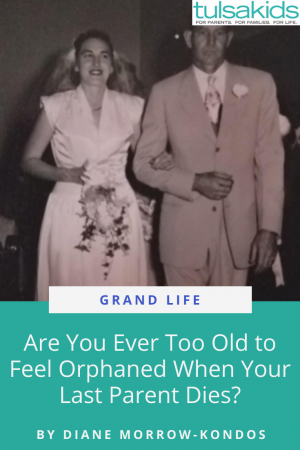