A few weeks ago, I was at my grandson’s school for the book fair. Callister is in K-4, and he proudly showed me around the school he’s already come to love. I was struck by how his neighborhood school felt so familiar, despite it being my first time inside. It felt like I had stepped back in time to the ’60s, a time of kids walking or riding their bikes to school, a time when parents were involved, and the school felt like a safe place in the community. His school and the community that supports it are exemplary!

My grandson goes to a good school, but my impression of safety and security are only delusional wishes. As we witness over and over again, our children are not safe. There have been twenty-seven school shootings in 2022. Yesterday’s massacre of nineteen innocent children and two teachers was heartbreaking. I wish I could say it was shocking, but it’s not anymore. I’m afraid we’ve all become almost numb to the murder of our children. We’ll yell, picket, and legislate to protect their lives before they’re born, but our lawmakers will stand idly by as they are killed with assault weapons in school after those children are born.

I was up most of the night worrying about my grandkids, the families in Texas and upset at the misguided attempts at protecting the Second Amendment while ignoring common sense. I won’t offer thoughts and prayers because it won’t bring back those precious children. Thoughts and prayers haven’t helped in the almost ten years since twenty children and six adults were killed at Sandy Hook. To expect change, we must change laws.

I want to wrap my grandkids in bubble wrap and protect them. I want to dress them in bullet-proof clothing before letting them out the door. I want to move them somewhere they are isolated and safe. But I know none of that is realistic or good for their mental health. I feel helpless and scared for my grandchildren and all the children in the United States.

There are nineteen kids and two of their teachers dead today. Today, there are nineteen kids who should have been getting ready for the beginning of summer break. There are nineteen families in Texas who should be planning for summer camps, swimming, cookouts, and vacations. Instead, those families are planning their children’s funerals. You may think it can’t happen in your small town or at your children’s safe little neighborhood school, but I am sure that is what the people in Uvalde, Texas, thought when they dropped their kids at school yesterday.

Yes, hug your kids a little tighter today. If it makes you feel better, send thoughts and prayers. But then register to vote, carefully consider who gets your vote, and work for change. It takes work to bring about real change, but look at your children and grandchildren. Aren’t they worth whatever it takes to keep them safe? Yesterday I felt hopeless. Today I feel motivated to fight for a better future for our kids. 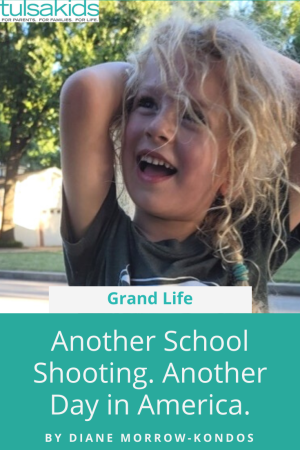