An Interview with ‘Backpack Full of Cash’ Director Sarah Mondale

Come to a screening of 'Backpack Full of Cash' Thursday, Sept. 20 at Circle Cinema; a panel discussion will follow.

A screening of “Backpack Full of Cash” followed by a panel discussion will be Thurs., Sept. 20 beginning at 7 p.m. at Circle Cinema, www.circlecinema. It will also be shown throughout the week after Sept. 20. Learn more here and at backpackfullofcash.com.

Filmmaker and teacher Sarah Mondale, co-founder of Stone Lantern Films with Sarah B. Patton, directed and co-produced “Backpack Full of Cash,” a documentary about charter schools and the privatization of public education. The film, narrated by Matt Damon, and written by Mondale and Vera Aronow, helps viewers understand charters and other “school choice” initiatives.

Q: Tell me about yourself and how you came to make “Backpack Full of Cash”?

Mondale: I worked on a series for PBS called “School: The Story of American Public Education,” narrated by Meryl Streep. I met a lot of great teachers making the documentary, and I’ve always wanted to teach, so I became a teacher. I taught for about eight years. My dad was a history professor and my mother was an ESL teacher in D.C. My grandmother taught in a one-room schoolhouse in Minnesota, so it was familiar to me.

Then a couple of things happened. I followed the politics of education after seeing “Waiting for Superman.” It made me very angry. I felt it was propaganda for charters and choice. About the same time, I read a book by Diane Ravitch, “The Death and Life of the Great American School System,” and the idea for the documentary converged around those things. My dad encouraged me to do something, so I got Sarah Patton and Vera Aronow on board, and that’s how we got started.

Since we made “Backpack,” it kind of took off. There’s a lot of attention on privatization.

Q: Why did you decide to focus on Philadelphia for the documentary?

Mondale: American public schools have challenges, especially those in areas of poverty, but they are not failing. Changing the school system that we have doesn’t make schools more equal. We chose to focus on Philadelphia because they already had so many charters, and they had drastically cut state funding. It’s happening all over the country.

Q: What was the most surprising thing you learned?

Mondale: We went to the home of a student using a cyber charter school  – we wanted to see what kids were actually learning who were spending the day on computers, and what that actually looked like. When we were filming the student at the virtual school, we were really, really surprised by what we saw. One teacher left to take care of her baby during the class. The student said it happened all the time.

The other thing was going to a voucher school in Louisiana, which was a Christian Evangelical school, and they were teaching creationism. Many states, even in NY where I live, they give tax credit scholarships, which are vouchers. I find it very troubling to divert state tax money to religious schools. There’s an organization in Texas, Pastors for Public Education, that doesn’t want vouchers – this is about religious freedom. A lot of religious leaders don’t want the government telling them what to do in their schools.

Q: What did you discover about foundation or philanthropic money regarding charter school funding?

Mondale: The foundations are playing a huge and outsized role. It used to be that states, superintendents, school boards were sort of in charge of schools in the country. That role has been superseded and taken over by [foundations such as] Gates, Broad, Walton who are dictating the direction of education in this country. They play such a large role.

KIPP is like the darling of the foundations. We have Success Academy in NY that gets a lot of philanthropic dollars, and they have a very high attrition rate. The kids go up to 8th grade, and then get counseled out, so the graduation rate is not good. [People should] really tease out those figures. Success Academy also loses many teachers throughout the year.

Another example is the Walton Foundation pouring money into the schools in Little Rock. But I have been very encouraged going around to different states — even different countries –and seeing these coalitions of parents and teachers and groups who are fighting for great public schools for everyone. I’ve seen it in Massachusetts, Georgia and Wisconsin —  statewide coalitions, public school moms and teachers who have banded together. They try to be on top of the laws and look at what’s coming down from the state. There are many, many parents of public school children who like their public schools and want to keep them.

Charters and vouchers do not benefit all children.

Q: So why is it that philanthropic foundations support changing the entire system?

Mondale: This whole question of standardized testing comes from the idea that teachers are not doing their job, and that’s at the root. When you don’t trust teachers, and if you’re a businessman or an entrepreneur, you think, “Let’s do what we do in Silicon Valley.” But a school is a public institution, not a consumer good; it’s not the same thing as a restaurant or a start-up tech business. Schools are civic institutions. Public education is a very complex undertaking. There are no quick fixes or magic bullets.

Q: Where are most charters being established?

Minority kids are often served by charters, but not always. There’s one in California they call the Billionaires’ Charter because it serves the Silicon Valley kids. Charters are more deeply segregated than regular public schools.

Charters have also found ways to keep kids out in terms of test scores, so they can cherry pick the higher performing kids. The lower performing kids get put back in the public schools. We found in Philadelphia that when you look at the charters, they don’t have the same percentages at all of kids with disabilities or who are English language learners that the public schools have. Charters are not educating the same kids. What happens is that we get a two-tiered system, with the public schools getting the highest need and most expensive to educate. I worry about that.

Q: What do you want people to learn from seeing the film?

Mondale: I’m sorry I couldn’t be there for the screening because it’s really exciting to find out what’s going on in different states.

I think the pendulum is swinging the other way. With the appointment of [Betsy] DeVos [as U.S. Secretary of Education], suddenly people have woken up and are more aware of the issue.

How are communities supposed to be able to support two levels of school systems? People need to be aware that this is going to increase your taxes. This is going to cost money. Just because one child leaves a public school to go to a charter, your fixed costs remain the same. It’s a very important issue – taxes and the money.

Q: What has been the reaction of people who see the film?

Mondale: A lot of people had no idea about this issue. They didn’t know the difference between a voucher, charter, or regular public school. They didn’t know whether they should be for it or against. A lot of the reaction has been, “Oh, my god I had no idea.” We’ve shown the film in many, many states people say, “This is exactly what’s going on in our state!” They relate to themes and the overall movement that’s going on. It’s an eye-opener.  People see it as a cautionary tale. 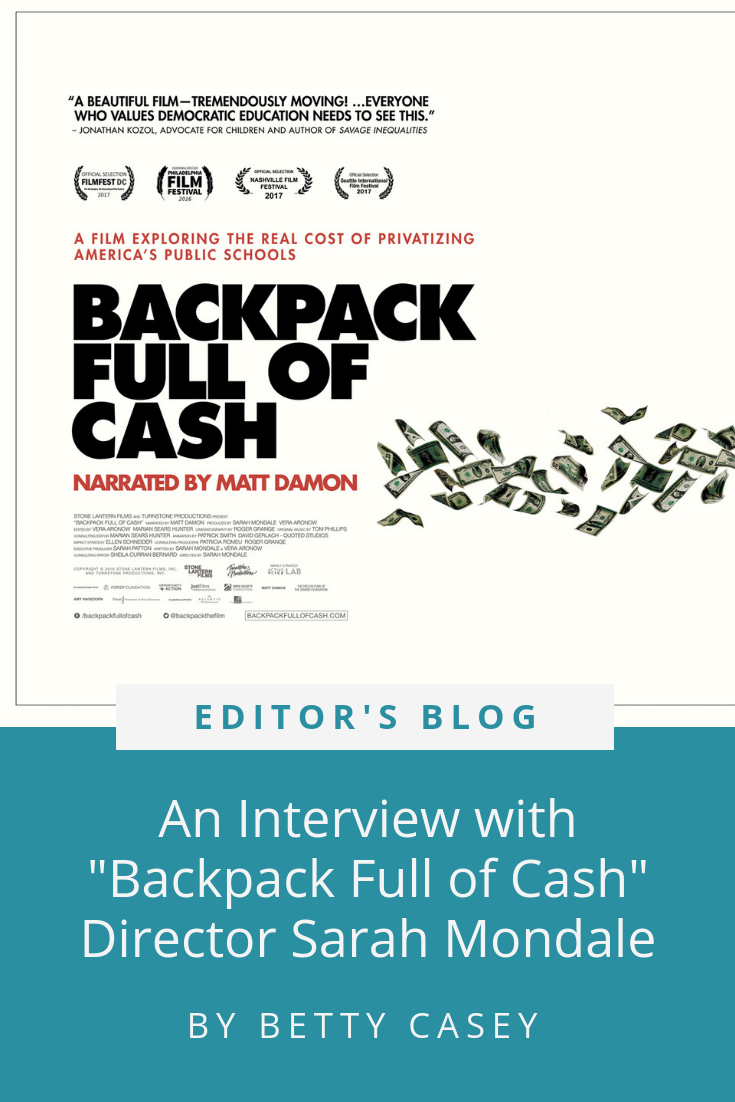