6 Party Games that Take It Outside!

It’s summer, so why not have your child’s birthday party outside? Outdoor parties have obvious advantages. Kids can get messy. Really messy. A cupcake with red icing dropped on the grass does much less damage than one dropped on a clean carpet. Party games can be more expansive and noisy outside, which means kids can play and run off energy without breaking your grandmother’s antique lamps.

Here are a few fun outdoor games to get you started. Most don’t require much, if any, investment. A trip to the dollar store will take care of most of the equipment needs. Think of the games you loved to play as a kid. Your kids will probably love them, too.

You know this one. Get a pole, a pool noodle or even a jump rope and have someone hold the ends. The object is for kids to get under the pole as it gets lower and lower with each pass. The child who makes it under at the lowest point wins. Play some fun music to accompany the game.

You can play this game with teams pulling at the ends of a rope or do a one-on-one version that could be set up as a tournament. Make the challenge more fun by having teams pull opponents through a sprinkler spray.

A cool game for a hot day. Split kids into duos and have them toss a water-filled balloon back and forth. Start with the teams close together and move one step farther apart with each toss. The last pair to keep their balloon intact wins.

Divide kids into two teams. You’ll need two flags, which can be anything – you could even have flags that fit the theme of your party. Beanbags, bright bandanas, small stuffed toys or socks all work well. The larger area kids have to run, the better. Try to create even teams (include parents!). Mark the “territories” for each team. This can be done with chalk or cones or tape, or just use landmarks such as trees or sidewalks.

Relays can be set up in a variety of ways. They can be straight running events where teams pair off and run from the start to a turnaround point to tag the next person in line. Or change it up by having kids jump rope or hop on one foot around the course to hand off to the next person in line. Or do an egg and spoon race where players must carry an egg (raw eggs are fun) to the turnaround point and get it back to the next teammate without dropping or breaking it. Kids can have fun thinking up their own variations for relay races. 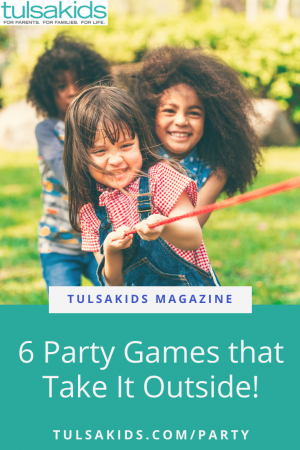