Kids with special needs are diverse like any other kids, and there are many educational apps that can help them with their special needs. Here are six of the best ones, and they’re all free. So if you’re parents or caregivers of a child with special needs, have them check out the apps, and then download the ones that are the most useful and fun.

This app is great for kids who need help practicing their oral communication skills. They can either upload or take a picture of themselves, draw a mouth, and then record anything they want to say. It’s particularly useful if you’re having a difficult conversation at home and your kids find it easier to express their views through an avatar rather than directly to you. It can also be useful in school if your kids require extra time composing an answer to a teacher’s question. They can record and re-record their response until they get it just the way they want it.

Created by a well-known occupational therapist, Dr. Frederick Covington, this app features lots of kid-friendly, game-like exercises aimed at improving their visual perception, tracking and coordination. It also improves fine motor skills, especially kids’ ability to create proper letters. The app is used by occupational therapists everywhere, but your kids can use it too, either on their own or with your help, to track their progress over time.

Based on cognitive behavioral therapy, which is widely used, this app teaches kids how to deal with different anxiety-provoking situations such as conflicts, social situations and tests. It features tools that help users relax, practice mindfulness and re-orient their thoughts. It has audio recordings with guided mediations, a journal for users to record thoughts that make them the most anxious and general tips for managing anxiety.

This social skills app teaches kids how to interact with different kinds of people that they encounter in their daily lives, such as grocery store clerks, hairdressers, doctors and restaurant waiters. It has 12-photo slideshows that model kids engaging in appropriate behaviors with people in different settings.

This game-like app, which can be played by up to four people, enhances kids’ ability to memorize and match items. Similar to the popular card game Memory, each player has a suitcase with six different items represented on a small card that is faced down. Players take turns turning the cards over. If the card is theirs, they put it in their suitcase. If not, it’s the next player’s turn. Aside from improving their working memory and retention skills, they learn how to focus, categorize and engage in proper turn-taking. It’s a great game for the whole family.

This award-winning app helps users identify useful strategies when they’re stuck while trying to reach a specific goal. Kids are asked to explain in what way they’re stuck, how they feel about it, and how strong those feelings are. It also tells them what percentage of other users and famous historical figures have faced similar issues. The app then generates possible solutions to the problem. Its biggest educational value, however, is letting kids put words to their feelings and showing them that they’re not alone in feeling the way they do. 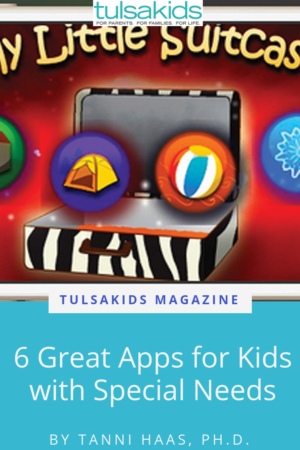