You Have a Story to Tell: Jason Reynolds on Writing, Race and Respectful Parenting

A group of Tulsa students in in-school suspension convinced Jason Reynolds to write “Miles Morales Spider-Man.” At the time, Reynolds was on the fence about whether to take on the project. However, once he explained that the protagonist would be a Black Spider-Man, the students’ enthusiasm helped him realize the kind of impact this book could have.

“These young men, who are in suspension, this is what they want,” Reynolds says. “They want to see themselves as superheroes.”

Jason Reynolds will return to Tulsa – virtually – as winner of the Anne V. Zarrow Award for Young Readers’ Literature. He will speak about his life and writing process and announce the winners of the library’s Young People’s Creative Writing Contest. Watch the presentation live on May 6, 7 p.m., on Tulsa City-County Library’s YouTube page, youtube.com/tulsalibrary. 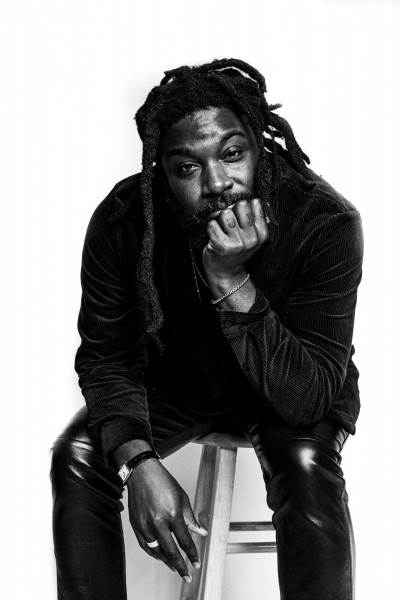 A goal of the award is to encourage children and teens to read and write. This dovetails perfectly with Reynolds’ role as the National Ambassador for Young People’s Literature.

However, he wants to do more than just simply tell kids that they should read and write. Instead, Reynolds aims to have meaningful engagement with young people so that they realize they have stories worth telling.

“I’ve been doing all this work in rural communities and small towns,” Reynolds says. “So let’s say I’m in Iowa. And a kid is asking me questions about my life and where I live and how I grew up. I also have the opportunity to ask that child, ‘Well, if I come to your neighborhood, where would you take me? Where would we go eat? What do you like to do? Where should I hang out?’ And when that happens, intrinsically, they start talking about what they love about their town. A town that everybody is overlooking, that no one is thinking about. And then they’re getting excited about what they’ve taken for granted all these years because everybody is under the assumption that there’s no story to tell. But there is!”

Since he’s not a parent himself, Reynolds is wary about giving parenting advice. However, he looks to his own parents as good models.

“[My parents] really, really pushed that I was a whole person, even as a child,” Reynolds says. “It was never a household where it was a ‘do as I say’ kind of thing, even though I had to do what they said. But I got to say, ‘I’m going to do it, but let me just express the way I feel in this moment.”

His parents offered a good balance of high expectations and a willingness to admit when they were wrong. Reynolds also was free to let his parents know what was going on in his life without fear of judgment or getting in trouble.

“It was powerful,” he says. “And that’s the reason now as an adult, when I’m around kids, instead of judging them, I’m like, ‘Help me understand. What’s going on in your mind and in your body to make you make these decisions or feel the way that you feel?’ Because if I understand you, I can figure out how to love you in a way that is effective.”

Despite this, some parents may hesitate to let their kids read Reynolds’ books, as they include themes such as gun violence and racism. In his own words, “I’ve been banned a million times.” But based on his experience talking with students, Reynolds says, they can handle tough topics and want to have these deeper conversations.

“You write stuff that’s hard because there are kids who are living hard lives,” explains Reynolds. “And if you don’t want your kids to read about it, that’s fine, but your kids should also know that those kids exist, and that they’re going to know those children…Parents have an opportunity and an obligation and responsibility to provide you with some resource to know that the world is bigger than your suburban bubble.”

For Tulsa parents in particular, the 100th anniversary of the 1921 Tulsa Race Massacre provides the opportunity to have conversations about race and racism. Reynolds visited Greenwood on a previous trip to Tulsa and believes that should be a yearly field trip for students.

Reynolds’ biggest regret about the “Stamped” remix, a YA book about the history of racism based on Ibram X. Kendi’s best-selling “Stamped from the Beginning,” is that it doesn’t include the Tulsa Race Massacre, due to space constraints. However, he believes it to be one of the most important moments in American history.

“Stamped” is still a valuable resource for parents and older students. The point of this book, says Reynolds, is to encourage readers to ask themselves some hard questions.

“This book is meant to give you all the historic context so we can start living examined lives,” says Reynolds “So that we can start to see where racism is hiding and how it is harming people in ways that we cannot even imagine.”

Fans of Captain Underpants will love Jason Reynold’s upcoming “Stuntboy, In the Meantime,” about a young boy with a big imagination. The book will be illustrated by Raúl the Third.

“Stuntboy, In the Meantime,” will be Reynolds’ first work written for this younger age category. His goal is to combine irreverent humor and quirky characters with a layer of emotional depth.

(Yes, You Can Do That!): Summer Edition