And other lessons learned from my week of international scavenger hunting.

For those of you with small children: If the thought, “Homemade croissants could be nice,” ever pops into your head, banish it immediately. This is just the first lesson of many I learned in my first GISH (Greatest International Scavenger Hunt; formerly known as GISHWHES) experience.

As Kristi Roe Owen of Coffee Nebula has already written a post explaining what GISH is, I’ll just sum it up quickly: GISH is a worldwide, week-long scavenger hunt started by “Supernatural” actor Misha Collins. The first step is to register for the Hunt and to either join a team (14-15 people) or ask to be assigned to one. You have a few weeks in which to sign up, and then it’s Hunt time. If you miss the registration deadline, you’re out of luck! The scavenger hunt list drops at the beginning of GISH week and contains around 200 items, with more added throughout the week. Each item is assigned a certain number of points and can be anything from “Bake a cabbage pie and determine the volume of a single piece” to “Project a poem about inclusiveness and diversity on the wall of a Trump building.” Many of the items are purely silly; others make a political statement, and others are geared at fundraising and promoting kindness to those around the world or in your community.

I was mildly brokenhearted last year because I learned about GISH just after the deadline closed. This year, I almost didn’t do it, but Kristi invited me to join her team. Going in, I was pretty confused and nervous (confusion is, after all, an important element of GISH!) but just had to hope I’d figure it out as we went along. And, thanks to belonging to a team composed of seasoned GISH-ers, it worked out just fine.

So, what did I learn?

1. Getting out of your comfort zone can make you cranky.

OK, so this shouldn’t be earth-shattering information, but getting out of your comfort zone is stressful! GISH is supposed to be fun (and it is), but there are moments when you just aren’t feeling it. For example, making croissants.

One of scavenger hunt items was to “do something that scares you.”  I spent most of Saturday (the first day of the hunt) and Sunday morning making a batch of homemade croissants. While making croissants may not be akin to petting spiders or kissing snakes, the 14-plus-step process always scared me off. And I was right to be afraid! Poor Joss. He was probably making no more than the usual mayhem on Saturday afternoon (you know, spilling milk on the futon, etc.), but combining that with trying to properly time proofing and rolling things out before the butter softens, etc., made for a very stressful afternoon. So it was good practice in trying to remain calm even when you want to scream. Or cry.

2. Meeting new people can be fun!

I have a small circle of friends, and for the most part, I’m fine with that. But it was really fun to collaborate with a new, international group of people that I’d never met before! We all had a common goal (get GISH points for our team by completing as many hunt items as possible–while having fun!), and we also got to collaborate on individual items–or get feedback on items we’d worked on by ourselves. It was a nice mix of individual and group work. And while there’s a good chance I still might not recognize most of the people on my team if I passed them in person, it was still a really cool experience to spend this focused amount of virtual time with new friends. For one week, they’re like family because the Hunt is never far from your mind.

3. Even if you don’t have all the answers, you can be a cheerleader.

As someone who is still learning to be bolder about giving opinions when prompted, this whole experience was a good exercise. When someone asks, “Which picture do you like best?” giving your opinion is a simple way to contribute to the group. But if you really don’t know the answer, you can always just say, “Great job! That looks amazing. I don’t know how you did that!” or something else to that [possibly cheesy] effect.

4. Be flexible/everyone has something to contribute.

One lesson I think everyone who participates in GISH learns (year after year) is that you can’t always do as much as you think you can. Life gets in the way, whether that be the routine of a daily job, illness, etc., and that’s fine. I joined a global GISH Facebook group, and there were a lot of people on there worrying about whether they’d contributed enough to help their team. But you know what? Maybe you can’t do as much as you said you would; maybe you tried making a romaine toga because you thought it would be easy to stick pieces of lettuce to packing tape (it’s not)–maybe you could only complete one task out of the ten you volunteered for. It’s okay! Because you’re still part of a team, your teammates still know you’re there doing what you can–even if that is just silent encouragement from afar. I think everyone understands that GISH is just a large addition to your already-full life.

5. Friends and family who are willing to be weird with you are the best.

I’m not going to lie, I was pretty distracted during GISH-week, and we ended up eating fast food at least three meals out of the week, and frozen pizza (with a side of Caesar salad because I now have Romaine for days!) as well. I can imagine it wasn’t the easiest week for Daniel, but he got into the spirit and helped me make a diet-coke-and-mentos-powered Duplo car, helped me mix fake blood for another item, and even let me take a fairly embarassing video of us both that will never be seen by the public on the last night of the hunt because I had time to squeeze in just one more item if only he would help!

Not only that, but a coworker humored me by letting me video her take a mini treasure hunt around the office, and my awesome brother and sister in Wichita helped me with an item that involved pretending to take a shower in a walk-in birdcage (in defiance of an old Roger Miller song saying, “You can’t take a shower in a parakeet cage”). My sister, who has long been an avian enthusiast, was our team’s only hope on this item, and although they were both a little confused by my request, rose to the challenge admirably! And of course, there are very few people who walk around downtown wearing a painted glittery beard at your request (Thanks, Kristi! 😉

6. It’s easier to do almost anything than spend time helping others.

Maybe it’s just selfish me, but I realized during this week that I would rather stand on a street corner downtown dressed as Loki and reciting a scene from Thor: Ragnarok than call up a local restaurant and ask if they had food I could donate to a nonprofit. I would rather sing at the Center of the Universe than get friends together to work on a helpful community project. And I would rather purchase items off of a refugee’s Amazon wishlist than find one in my community to talk to and help. So as you can see…not all the lessons I learned during GISHweek are flattering.

Part of this has to do with which items take the most time to do, but it’s something to reflect on. The point of GISH is not Just to have fun, but to make the world a better, brighter place–yes, by doing random, weird things that make people laugh, but also by doing kind things for others in your community. And it turns out, I’m not fabulous at that.

Joss was actually a pretty big help with GISH, and I think he enjoyed it, too. He got to go shopping for school supplies at Target, he learned a few words of “Carry on My Wayward Son” so he could help me hold up singing paper bag puppets for a video, he got a kick out of our Duplo vehicle, got to do his own “nose paint” painting, and he appeared in several other videos as well. So he was an integral part of the whole week, which I am so grateful for! 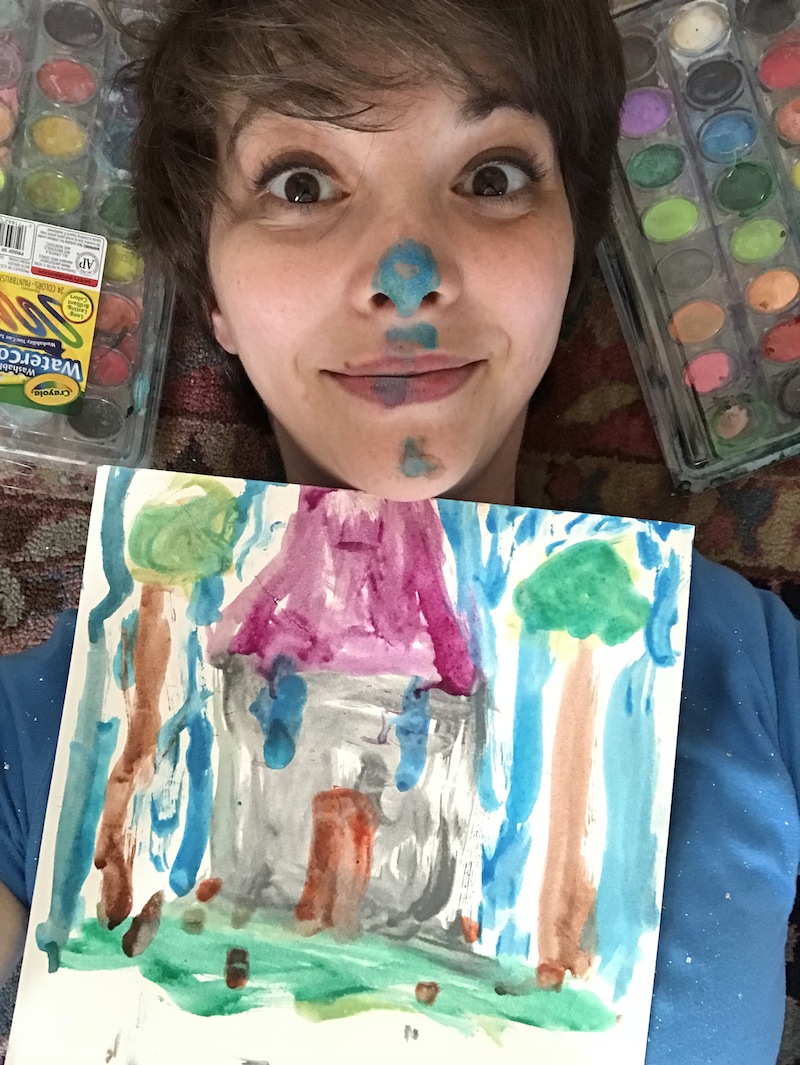 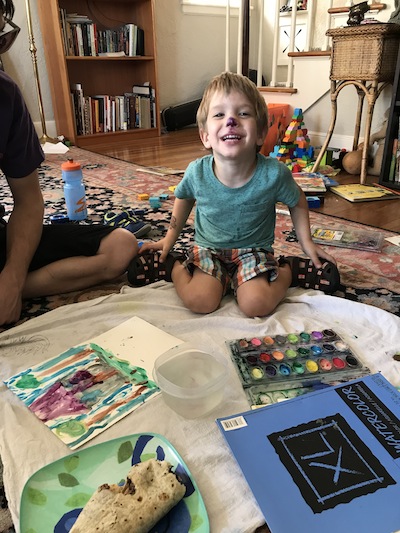 On the other hand, if you were to watch Kristi’s and my Thor: Ragnarok scene and find yourself wondering, “Why is Loki holding a three-year-old child? I don’t remember that from the movie,” that’s because: he wasn’t. But when you’re a mom with a three-year-old trying to make a short movie in the Tulsa Arts District, you don’t take ANY chances that your child is going to try running toward the street. Another good lesson in flexibility and “doing what you can do” without expecting perfection.

GISH taught me other things as well, like how I work within an online vs. a face-to-face group, the extent to which I am-or-am-not competitive, etc. It was an incredible week that gives participants the freedom to do things they might want to do–like make movies or crafts–that they don’t necessarily take the time to do on a daily basis. It encourages participants to try new things (Thanks to GISH, I have an appointment at Central Library for an orientation into the use of their recording studio later today!) and expands their ideas of what they can and cannot do.

I don’t know if any of this will inspire you to want to join GISH next year, but if you do, make sure you visit GISH.com next summer (June/July) so you can get the latest information on when to register. 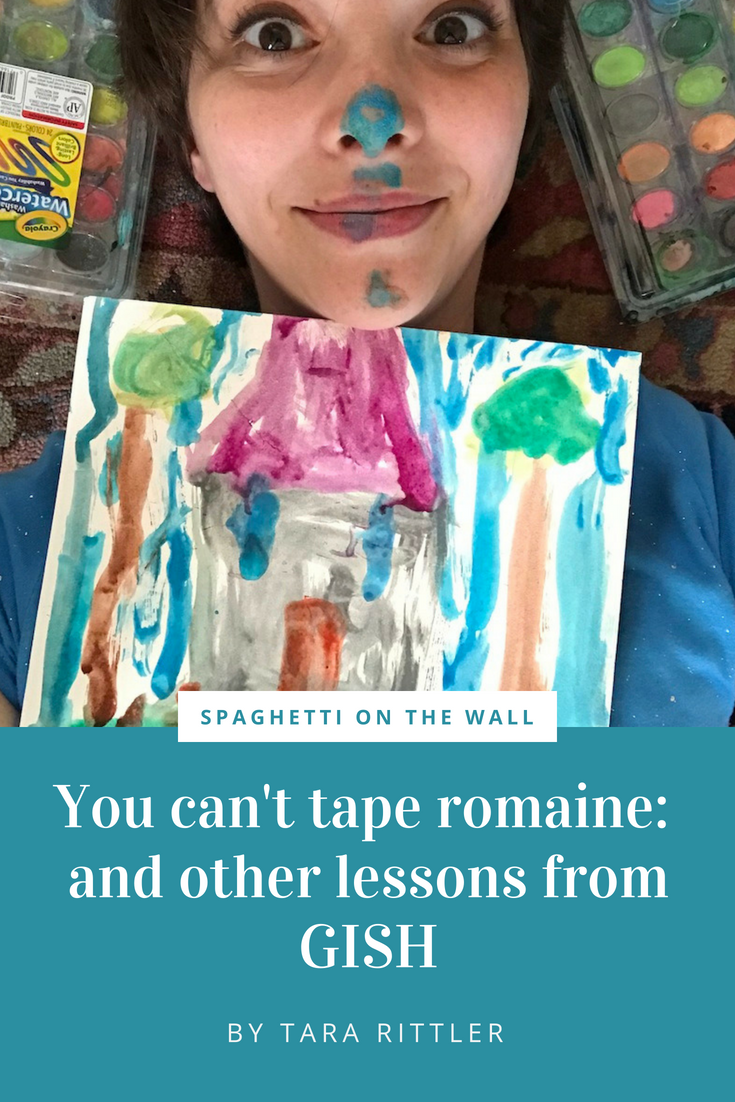