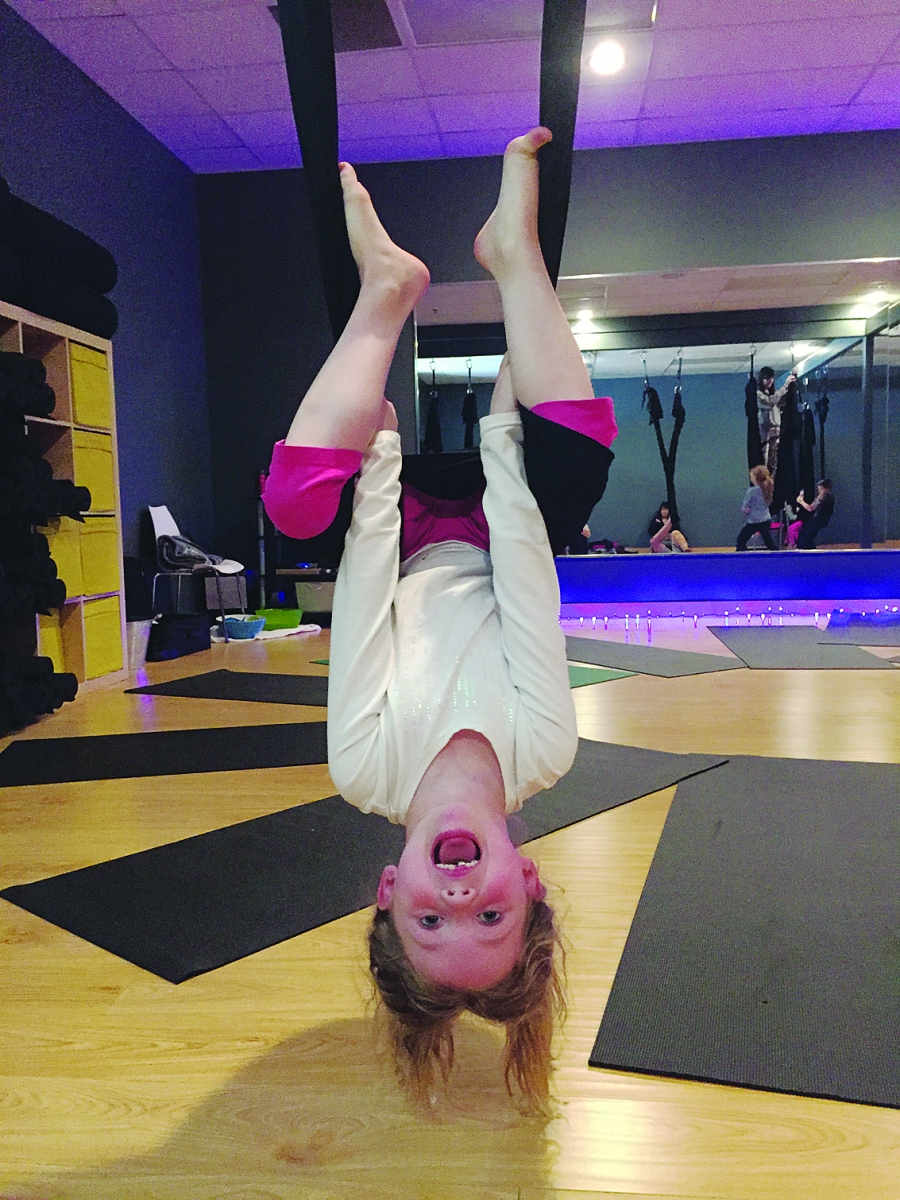 At Zen Body Yoga kids swing from the ceilings, literally. Amy Miller opened the studio located in Kingspointe Village at 61st and Yale about a year ago. At that time, her yoga, pilates and zumba classes were exclusively for adults, but the studio has recently branched out to include several yoga programs for children of all ages. Starting as early as 6 weeks old, children can attend yoga classes with their parents. Zen Body Yoga also offers Story Time Yoga for ages 3 and older, Yoga Fun for Kids for ages 5-12, and a Teen/Tween class.

The aerial yoga classes have become so popular that twice a week Zen Body actually picks up a group of Carnegie Elementary students from school and shuttles them straight to the studio for their classes.

Miller says that the exercises and stretches performed during both the aerial and mat yoga classes can be extremely beneficial to counteract the sedentary lifestyle that many children have. With the influx of technology, children are spending more and more time playing video games, watching TV, or even doing their homework in front of a screen. According to Miller, when a person’s body is in one position, especially a contained seated position, it can be damaging over time. Children are not building the core strength they need or developing body awareness and balance. “You’d be surprised the amount of kids who can’t even stand on one foot when they start here.” Miller says.

In addition to the benefits of mat yoga for all children, aerial yoga has applications for children with sensory processing disorders, ADD, ADHD, and autism spectrum. When Lauren Brown’s son received his diagnosis, she researched traditional and non-traditional ways to help him develop and cope, and came across aerial yoga. Once she saw the difference it was making in her son’s life, she bought an aerial hammock for their home and became certified to teach the classes as well. Now she, along with Miller and Dana Morris, teach all of the children’s classes, which are offered six days a week.

The classes are almost a form of therapy for some of the students. “The way that we move the swings and positions in the classes is very similar to the way that they move the hooks and the exercises in occupational therapy,” Brown explains.

And as for the kids with ADD and ADHD, the hammocks can have a soothing effect. “They’ll come in running around, unfocused and crazed, but then we will wrap them in the hammock position and the compression calms them down dramatically.” Miller says. 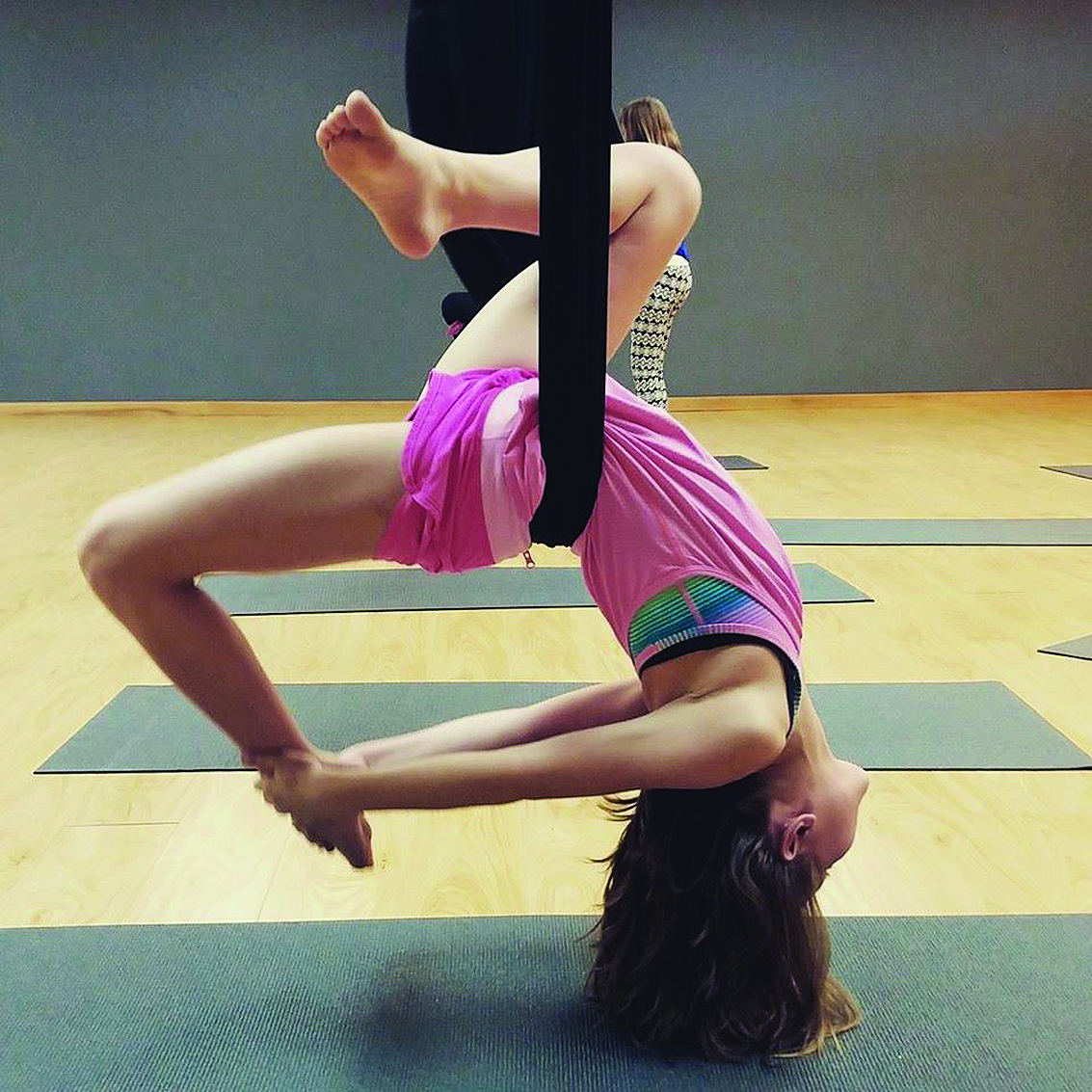 Besides the calming aspects of yoga, both children and adults benefit from increased flexibility, balance and body awareness, but some may feel that yoga requires a certain body type or ability. “There is no specific skill-set required; anyone can do yoga.” Brown says.

“So many people complain about not being flexible enough or that it is too hard,” Miller adds, “but that is why you need to attend the classes.” Individuals just have to commit to the program and challenge themselves. While the staff at Zen Yoga is constantly looking for new ways to support and encourage their clients, yoga is not competitive. The only competition is the one within you; it is all about self-improvement.

But, perhaps the most beneficial part of yoga comes in a quality you would never expect. “While everyone recognizes that yoga provides healthy movement,” Miller says, “many people don’t realize the emphasis on breathing can be transformational. Slow, deep breathing communicates a sense of security and safety to the parasympathetic nervous system.  Learning to control breath can create this sense of calm and well-being on demand. Improved self-regulation enables us to better manage stress and negative emotions, allowing us to come face-to-face with those automatic negative thoughts that so often plague children and adults alike.”

Your budget-friendly, nutritious guide to the grocery store