Working Out at Home:

My Introduction to Cosmic Kids Yoga

One thing I haven’t figured out in my almost-three years as a mom is how to work out on a monetary budget of next-to-nothing and a kid-free time budget of, say, one hour per day. Before having Joss, I loved cycling and had even enjoyed a season of racing cyclocross (cyclocross is a kind of cross between road and mountain bike riding–you ride road-style bikes with slightly wider tires in the grass or through sand, hopping off occasionally to run up hills or over barricades. It is the most fun hard workout ever!). What’s more, I had a great, if small, community of friends who would ride together along Riverside, or at the weekly cyclocross practice in September/October or at Turkey Mountain (never my favorite, as mountain biking mostly just reminded me how scared I am of rocks and is a tangible reminder of how fear can really hold you back!)

Now, the friends I used to ride with are scattered to other states, and although we did buy a bike trailer when Joss was born, I never grew comfortable with the thought of lugging bike, baby and necessary cycling accessories downstairs, hauling the trailer out of storage and figuring out how to set it up. I tried once…and failed.

Beginning in August, I walked Joss to and from school five days a week, 1.4 miles each trip, which was both fun and a workout of sorts–but now we’ve moved, and I no longer have that option.

Now, I know mothers work out and there are plenty of choices available, so when it comes down to it, I have no airtight excuse for not having a workout routine–but it’s still hard. And so, it was with great delight that I discovered a home workout that Joss and I can enjoy together: Cosmic Kids Yoga.

Yet another fun thing about Joss being in school is that they have a weekly yoga class and also do a short yoga session each day in their classroom. I’m not sure which YouTube video they use for this, but while I was searching for it (“yoga for kids”), one of the top results was “Moana: A Cosmic Kids Yoga Adventure!” Intriguing!

I clicked on the link and was further delighted to discover that the instructor has a very nice British (I think?) accent. Honestly, I just connected my headphones and listened to it for the next thirty minutes at work. (If you ever want to listen to an even more soothing British accent for hours on end while listening to interviews with authors, editors, and other people involved in the book publishing business, I recommend the Tea and Jeopardy podcast, hosted by Emma Newman.)

After picking up Joss from school, I introduced him to Cosmic Kids. We did both the Moana one and the Alice in Wonderland one (because the teaser image was a cat.) The workouts are generally between 20-30 minutes, and while I didn’t feel like I was getting a strenuous workout, it was definitely more yoga than I’ve done in awhile and a nice way to ease back in. After three days straight of Cosmic Kids, I could actually feel my arms and legs getting sore! In a good way. Result! 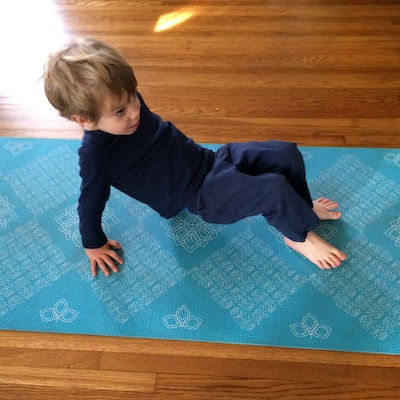 Besides Moana and Alice in Wonderland, there are Star Wars adventures and many that feature characters invented (I think) by Cosmic Kids. We did an adventure where Fernando the Silver Fox taught us about how we don’t need to be afraid of the dark, and one where we helped Mimi the Mermaid get a magical “legs” potion so she could attend a birthday party on land. The teacher, Jaime, has been trained in theater and it shows; she is very engaging and, although I am not the target audience, I can see kids really getting excited about following along with the videos. 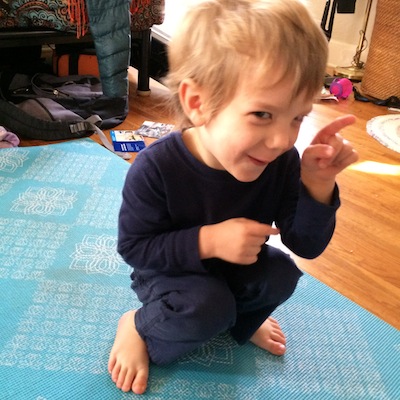 It’s not every yoga video that teaches you “Coconut Pirate” pose!

The Cosmic Kids website says “We’re making yoga and mindfulness FUN for kids,” and while each adventure is a lot of fun and features goofy names for standard yoga moves and occasional silly songs, each episode ends with lying down and reflecting on the lessons learned in that episode. 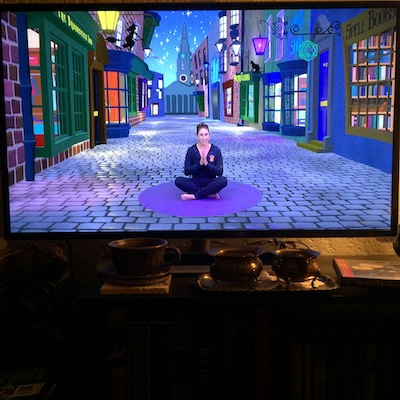 There’s even a Harry Potter adventure!!

I would love to know, from other parents with young children: How do you make time to work out? Do you go to a gym or work out at home or outside? Do you ever workout with your kids?