This past weekend, we got to see my mom and step-dad for the first time since quarantine! I’d been wanting to visit Woolaroc Museum & Wildlife Preserve for awhile, and since they just re-opened, this seemed like a good opportunity. (Coronavirus aside. However, it was easy to stay at least six feet away from people both inside and outside of the museum.)

If you haven’t been, Woolaroc is just about 50 minutes north of Tulsa. We headed up US-75 then over to state highway 11. Easy peasy, and the last part of the drive especially takes you through some beautiful landscapes.

Later this summer, I have dreams of doing an overnight to Bartlesville, working in a trip to the Kiddie Park and then a leisurely visit to Woolaroc. The Animal Barn wasn’t open while we were there, so I’d love to be able to do that as well. But since I haven’t done that yet, you can check out this blog post by Diane Morrow-Kondos about the overnight she took to Bartlesville with her then-two-year-old grandson. 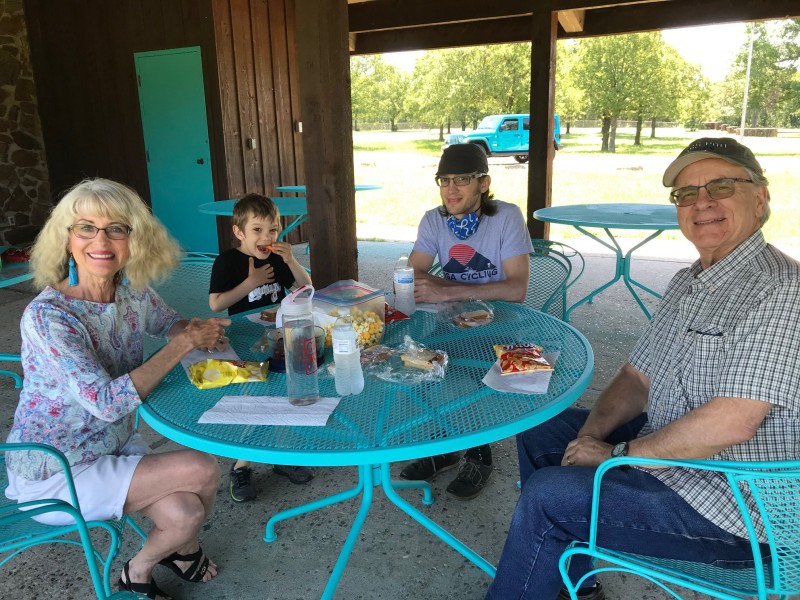 We left Tulsa around 10:30 a.m. so it was just about lunch time by the time we arrived. There’s a ticket booth as you pull into the main Woolaroc Drive. On the other side is a picnic area with plenty of seating, clean bathrooms and old Phillips 66 station. There’s a concession stand available by the main museum, but it was closed while we were there. 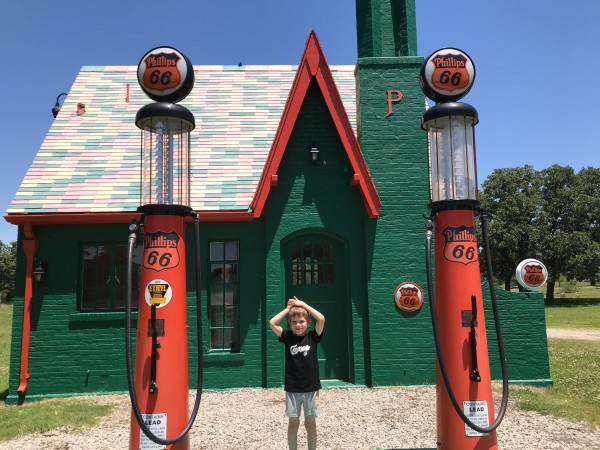 The gas station was locked, but you could peer into the windows. The inside is decorated to look like a working station. There’s even a bathroom and a life-sized mannequin standing in the front, which is a little startling if you’re not expecting it! (You can see it in the window to the left of the door.)

When we were done eating, it was time to drive through the main gates and onto…the Mountain Man Camp! 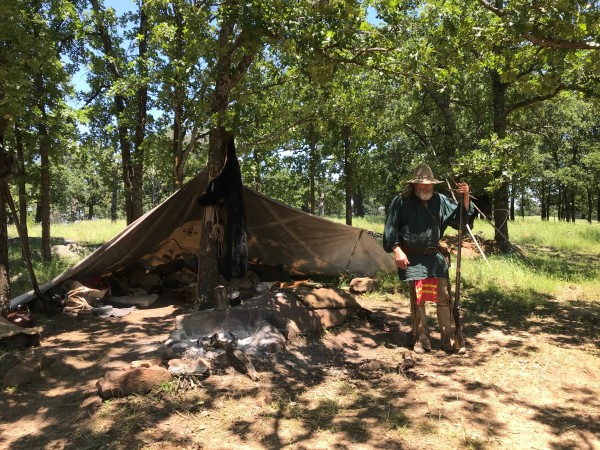 According to the Woolaroc website, “Woolaroc’s Mountain Man Camp, led by brothers Wes and Roger Butcher, is a living history event that recreates the life of a fur trader in the 1830’s. The camp started out as an unpaid test run some 25 years ago, and has since evolved into one of the signature pieces of Woolaroc.”

Although kids can usually enjoy some interactive elements during their visit to Mountain Man Camp, such as tomahawk throwing and a rope swing, those were closed during our visit due to COVID-19. The camp itself had been moved temporarily away from some of those more tangible attractions. We still got to talk with both Mountain Men and see several horses and this adorable puppers. 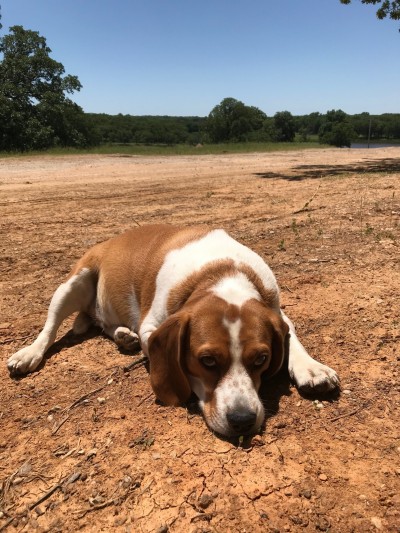 I missed most of what the Mountain Man above was saying because Joss was antsy and we wandered off. But I know my mom, step-dad and Daniel were all impressed by the way he stayed in character and the amount of information he imparted. 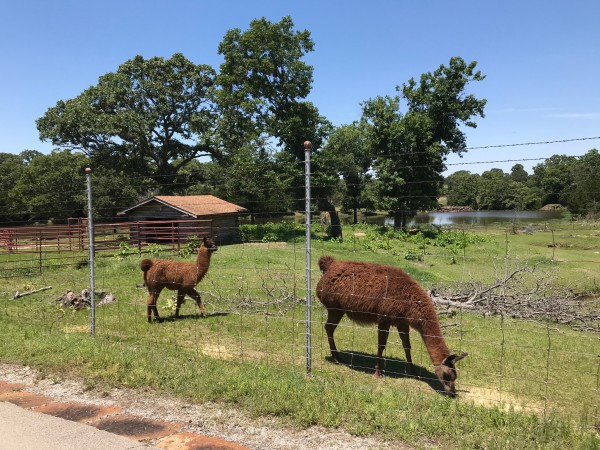 The drive from Mountain Man Camp to the main museum takes you past several pens of animals, including bison, llamas, long-horned cattle, etc. So it’s a lot of fun for kids, and the countryside is gorgeous. 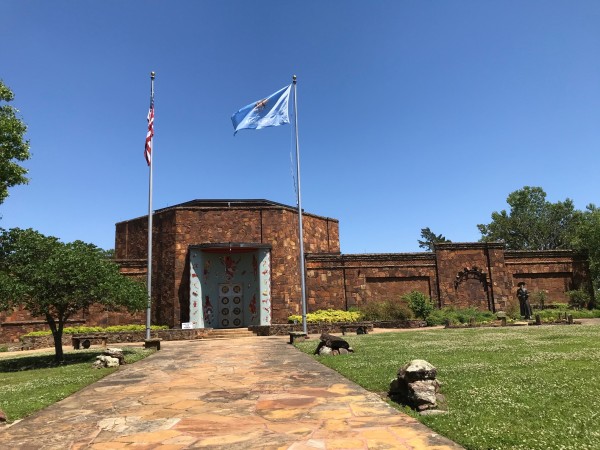 The entrance to Woolaroc Museum is flanked by statues of Belle Starr and another outlaw or cowboy. They both had their scarfs pulled up to remind people to wear their face masks inside the museum 🙂 And there were lots of signs reminding visitors to limit each room to no more than 6 guests at a time. 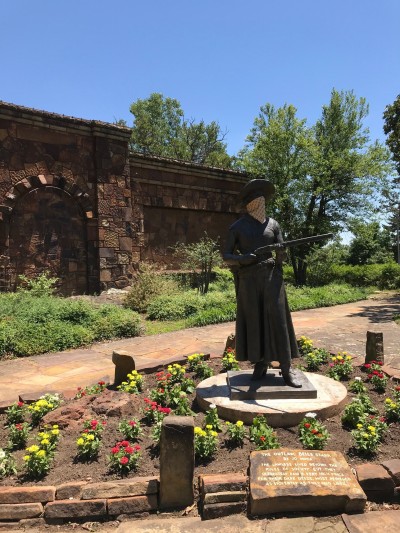 The Museum itself is full of Western and Native American art and artifacts. One of my favorite parts was seeing all of the Pioneer Women statues. I’ve seen the large Pioneer Woman in Ponca City but hadn’t realized the design had been chosen out of several contest entries. Each entry focused on a particular characteristic of a Pioneer woman. Self-sufficiency, courage, faithfulness, etc. 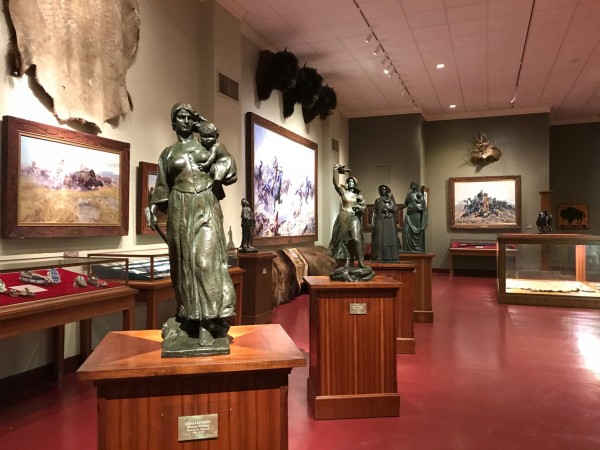 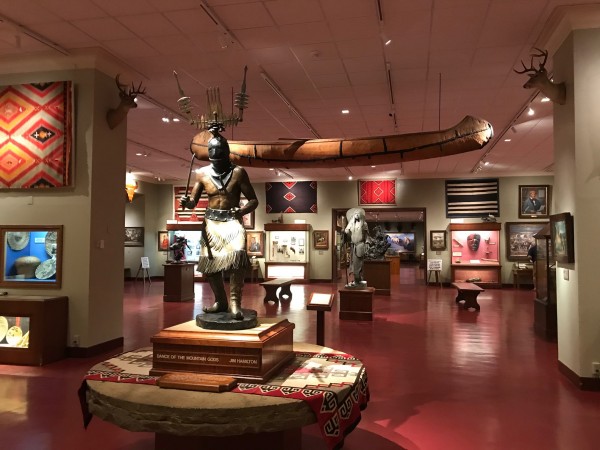 Joss’s favorite part, of course, was the room with the giant train set. 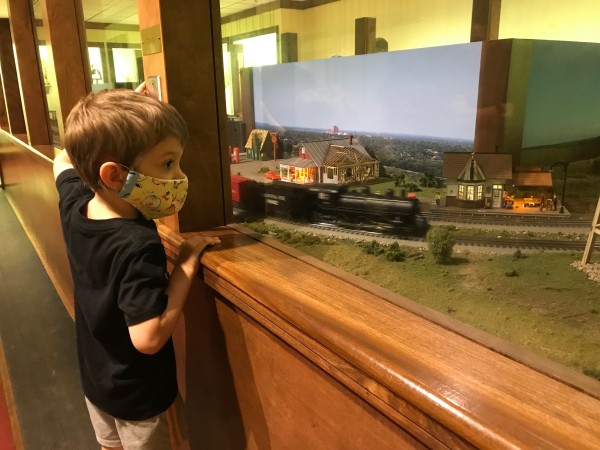 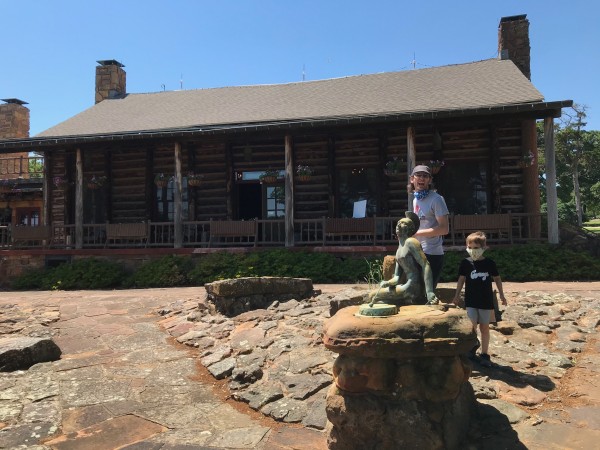 I haven’t mentioned the history of Woolaroc. It began as the Frank Phillips Ranch in 1925. The ranch gradually began its journey toward museum-hood four years later. You can learn more on Woolaroc’s website. Frank and Jane Phillips used the Woolaroc Lodge as a country home beginning in 1927. It overlooks a gorgeous lake, and there are stones perfect for kids to scramble around on. 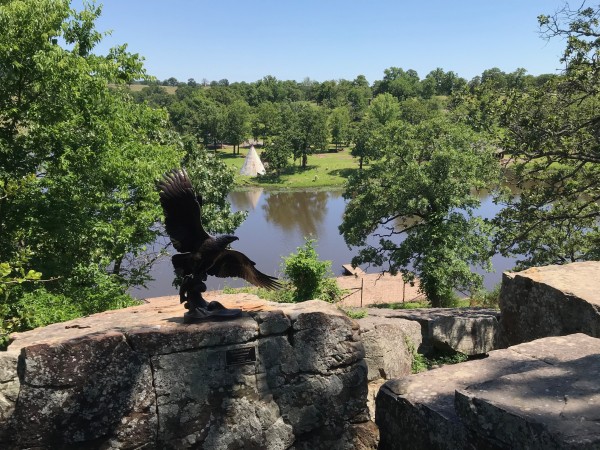 There was an information desk inside the Lodge. The man working there explained that all the animal heads adorning the walls came from animals who had lived on the Woolaroc grounds at one point or another. With a few exceptions. We’d been joking about the possibility of lions roaming free as we drove in through the prairie, so imagine our surprise to learn that there had been a retired circus lion in residence awhile back! 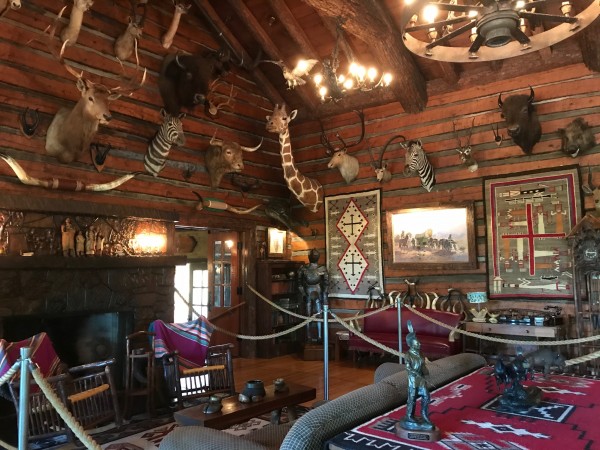 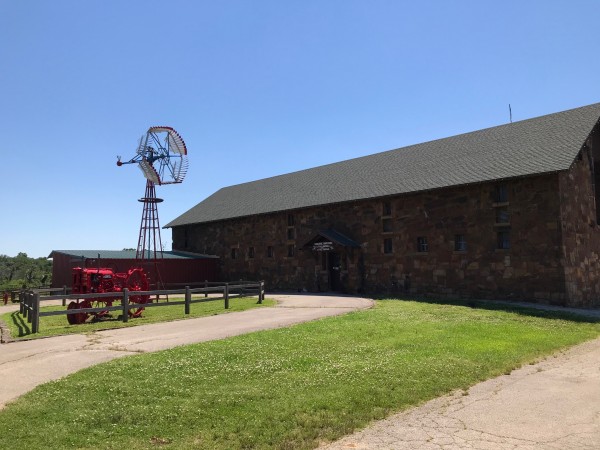 Although the popular Animal Barn was not open during our visit, there were still plenty of animals on view. The emu was particularly friendly and followed us around the perimeter of its cage. Joss named it Daniel, ha. 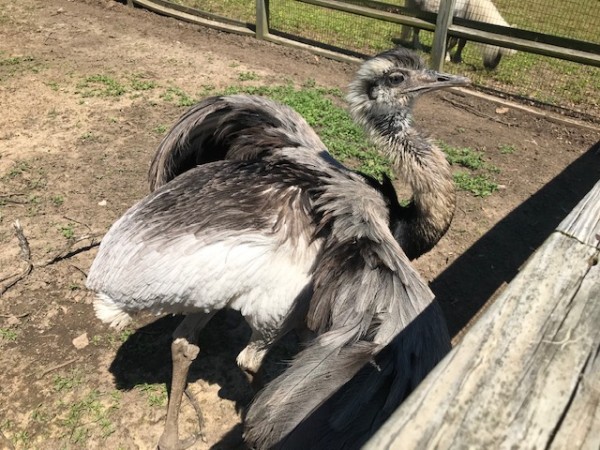 Seriously, it was the cutest!

We look forward to returning once the Animal Barn is open! The concession stand and playground were right next to the barn and petting zoo. 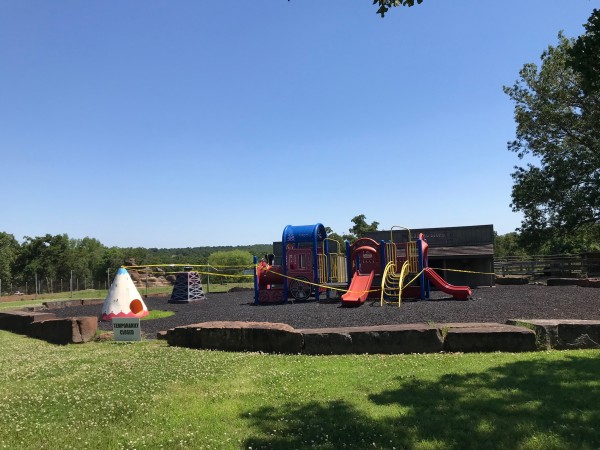 As we drove home, an amazing thing happened: Joss fell asleep! He hasn’t napped since his last day of school before the quarantine began. So if nothing else, a 45-minute trip to Bartlesville might be just what you need to encourage an overdue snooze. 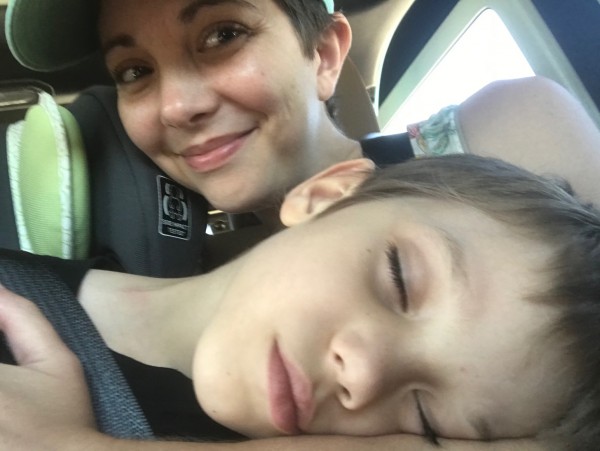 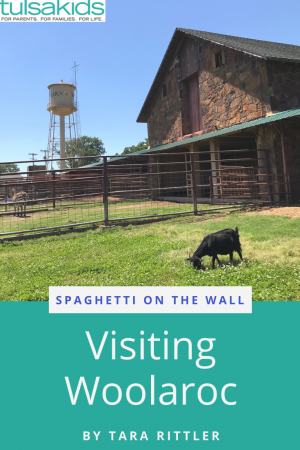