The Perfect Mini-Vacation for Kids 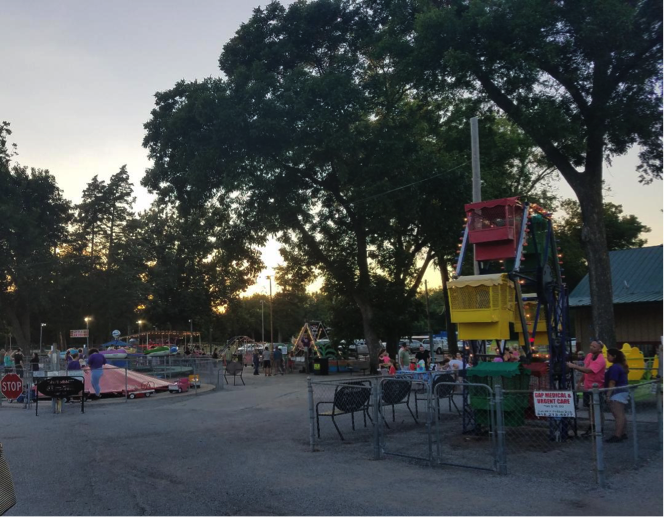 The Kiddie Park, a step back into time and a fun park!

Bartlesville is a great family mini-vacation destination close to Tulsa. This was our second year to take my grandson to Bartlesville for an overnight vacation. Last summer, my daughter and I were perhaps a little unrealistic in our expectations of how then one-year old Callister would enjoy the Kiddie Park. He ended up falling asleep on the very first ride and sleeping the rest of the evening, missing out on the entire experience. We still had a good time, but since then, we’ve been looking forward to returning with a now two-year-old Callister. What a difference a year made!

Even getting the luggage from the car to the room is an adventure for a kid!

We learned from our experience and did a few things differently this year. We stayed at a different hotel, the Hilton Garden Inn, which was within walking distance to shops and restaurants and even the Kiddie Park if you’re a physically fit, ambitious family. Using the two-year-old as an excuse, we chose to drive. The hotel was a vacation in and of itself. Callister is a hotel guy already, loving the ride on the luggage cart, pushing the elevator buttons, swimming in the hotel pool, and indulging in the delicious, full-service complimentary breakfast. This hotel was a little more expensive, but the convenience and the amenities made it worth the extra money. 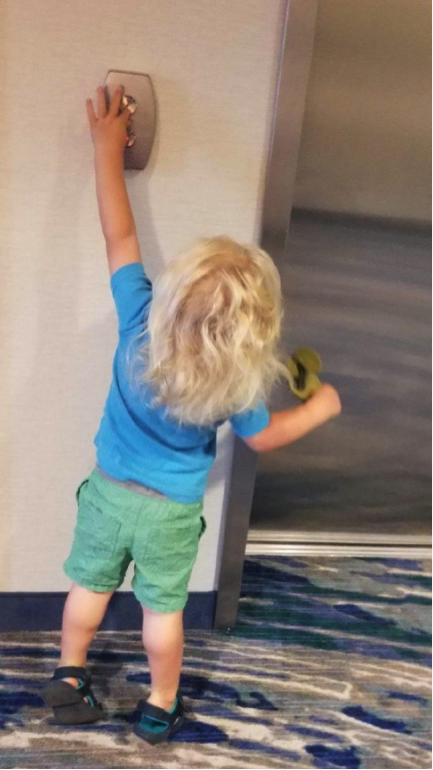 He’s tall enough to push the elevator buttons now! He quickly learned which button to push for our floor. He just turned two and we were on the second floor, how appropriate!

My daughter is great at getting Callister down for a nap, and he’s a fairly adaptable kid, so she manipulated his nap to be a late one, setting the stage for a more enjoyable evening and late bedtime. We ate at The Painted Horse, which is a locally owned restaurant with delicious food and lively enough that an active toddler wasn’t a distraction to other diners. I highly recommend their Farmer’s Garden salad with homemade honey mustard dressing and the half-order of brick onions, a meal divided between healthy and unhealthy.

With our appetites satiated, it was time to head to the Kiddie Park just a few blocks away. As soon as Callister was out of the car and spotted the carousel, the game was on! He was so thrilled he could barely suppress his excitement long enough for us to get tickets. Entrance to the park is free, and each ride requires one fifty cent ticket. Be aware that they do NOT take credit/debit cards, cash is required. In this day when most of us rely on plastic, this might catch some people (me) unprepared. Fortunately, my daughter was ready with cash in hand. The atmosphere at the Kiddie Park is almost magical, perfect for the pre-school crowd. Most of the rides are perfect for five and under, and there are a few rides that older kids might like. Callister ran from ride to ride for two solid hours, keeping up an impressive all-out fever pitch. One warning, the parking lot at the Kiddie Park gets a bit crazy at closing time. Thankfully, I was creeping slowly and watching my backup camera when suddenly a toddler darted directly behind my vehicle. I slammed on the brakes and missed him by mere inches, but if it were not for my backup camera, I’m afraid this would have had a horrible ending. He was too small for me to have seen in my rearview mirror. I was shaken up enough I insisted my daughter get out of the car and direct me as I back up. We were happy to be a short drive back to the hotel. When we got back to our room, Callister tried to climb into the Pack and Play himself saying over and over, “sleep, sleep”! I wholeheartedly agreed! 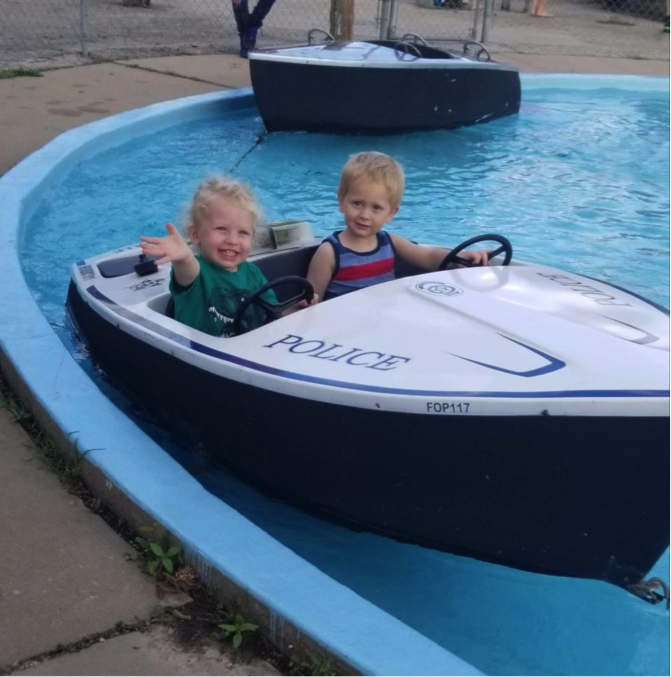 The boats were such a hit, he had to ride them twice!

After a delicious breakfast and fun swim at the hotel, we packed up and headed to Woolaroc, just 12 miles south of Bartlesville. During the summer months, Woolaroc is closed on Mondays, open Tuesdays through Sundays from 10 until 5. Admission is twelve dollars for 12 and older and is free for kids 11 and under. The admission at the entrance includes everything, and we ran out of toddler time before we even made it to the museum. The highlights were the drive-through, seeing all kinds of animals including zebras, water buffaloes, ostriches, and llamas. After parking, we headed straight to the old dairy barn, which now houses animals children can look at up close and even pet. My grandson was excited to pet adult and baby goats, a Shetland pony, and see baby chicks and baby peacocks. He loved this experience, blowing kisses to them when it was time to leave. There is also a kid’s playground, which proved irresistible despite the rather hot day. Unfortunately, there is no shade on the playground and the equipment was already hot to the touch, so we didn’t last long there. We knew we were precariously close to naptime, so after a quick stop at the concession stand to get water and a snack for the road, we left. Next summer we hope to make it to the museum and Heritage Center. There are lots of activities going on at Woolaroc including the upcoming Kids fest this weekend, June 29th and 30th. Check out special events at Woolaroc. 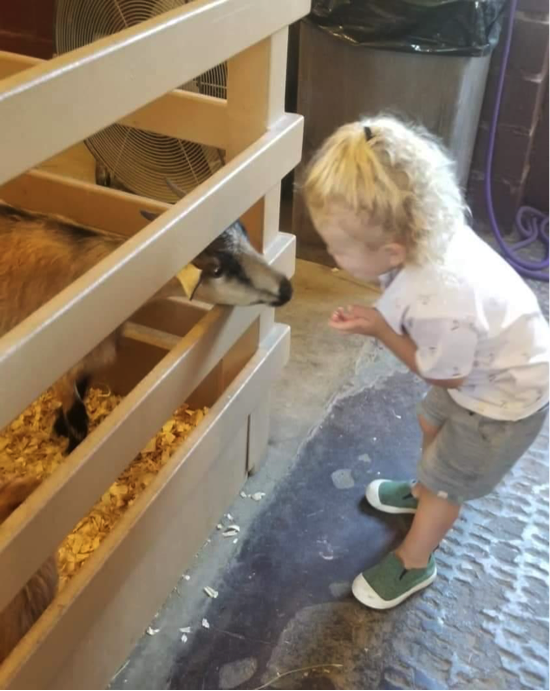 The animal barn is seasonal; check the website before you go.

Bartlesville is an easy, quick get away that’s fun for families. Although we made it an overnight trip, it’s an easy day trip also. I started taking my kids to the Kiddie Park in 1989, and although the ticket price has gone from ten cents to fifty cents, not much else has changed. As you approach the front gate, music from the ’50s and ’60s will pull you into a timeless family experience. A trip to Bartlesville is worth the short drive!

My daughters enjoying the boats in 1989! 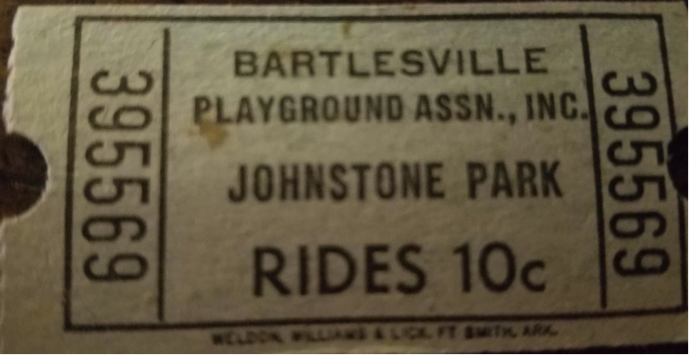 For some reason, I still have a ticket from 1989. Think they will honor it? 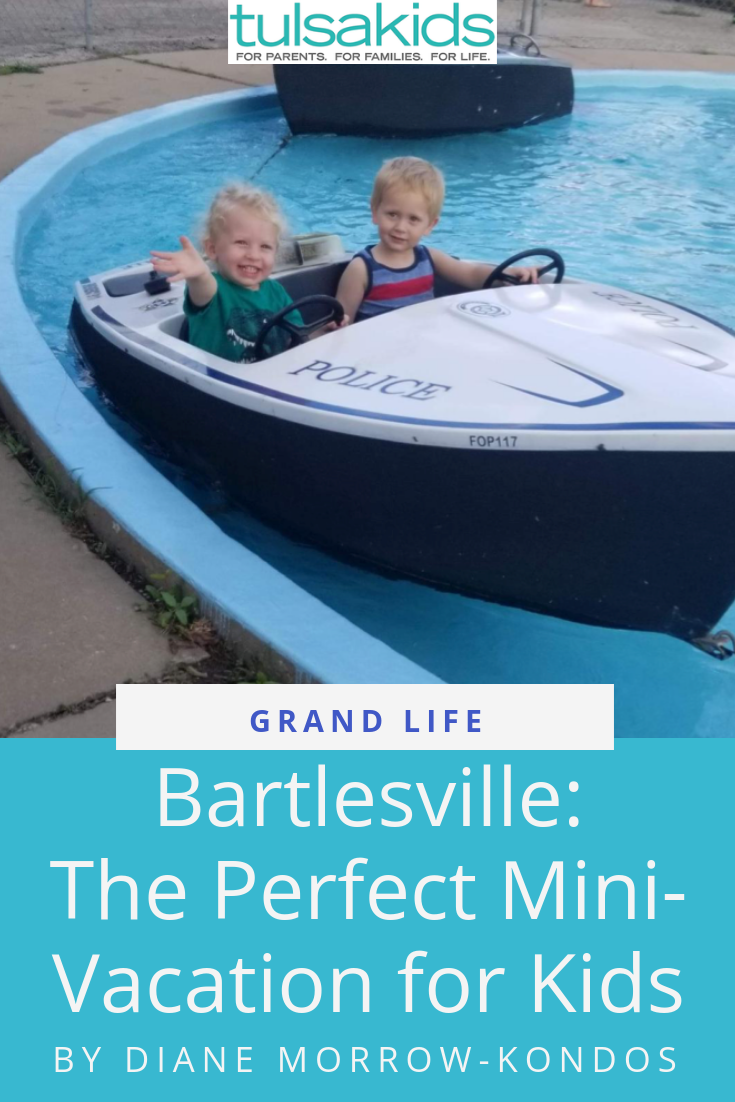