A few weeks ago, I wrote about the Out to Sea Shark Dive at Wonders of Wildlife, a once-in-a-lifetime experience (both because I’m not in a hurry to get back in the water with sharks, having some irrational shark fears and because it is a unique attraction).

But I wanted to write about the rest of Wonders of Wildlife, because there is so much to see even if you have no interest in a shark dive.

First, it was very easy to make a day trip out of Wonders of Wildlife–the 2 hr. and 45 min. drive to Springfield was easy, and although we did feel rushed trying to see everything in just one day (plus the added hours spent on the Shark Dive), we still got home in time for dinner. 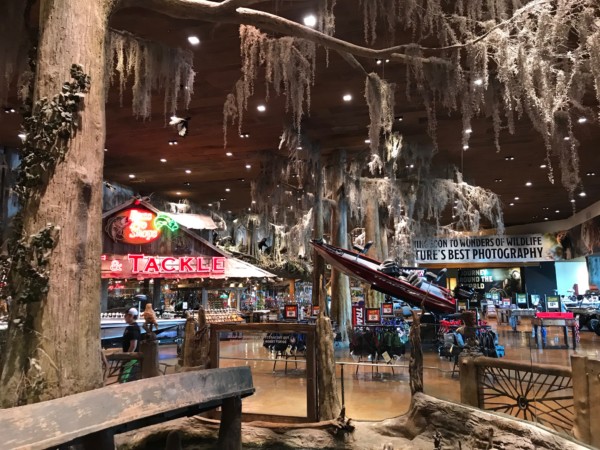 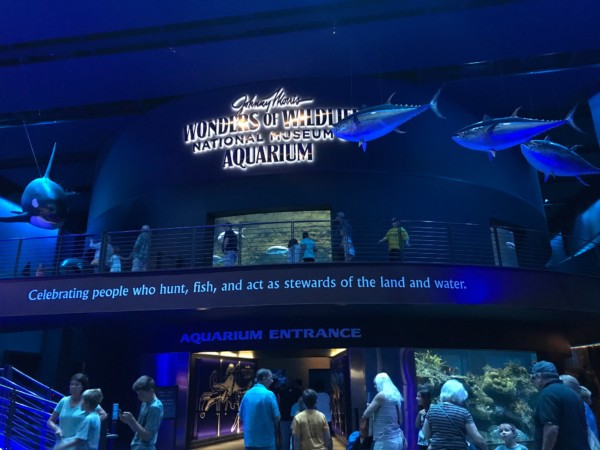 As soon as you walk through the museum doors, you know you’re in for a special experience. A sperm whale wrestling a giant squid hangs from the ceiling above the doors, and there’s a 360-degree cylindrical tank marking the aquarium entrance (see above). One of the animals in this tank was, we are pretty sure, a lesser spotted dogfish, aka Joss’s favorite shark. He refers to them as “lesser misses spotted dogfish,” haha. So that got our visit off to a fun start!

Walking through the aquarium entrance, you head to the right, where the wall is lined with life-sized sharks! Imagine how nicely this sets the mood if you’re going on a shark dive! 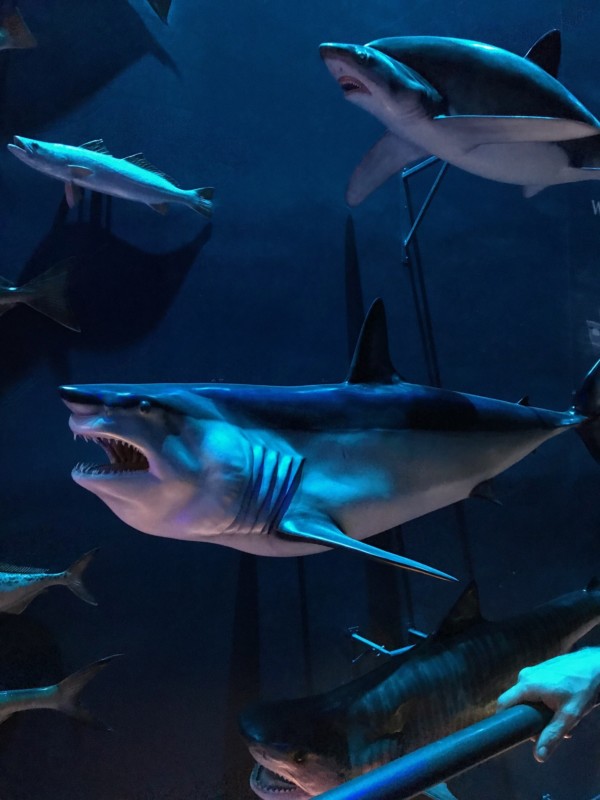 To your left is a humpback whale and calf suspended from the ceiling, beyond which is a large, colorful aquarium. When we arrived a scuba demonstration and lecture was just finishing up, so a crowd was gathered in front of the tank. 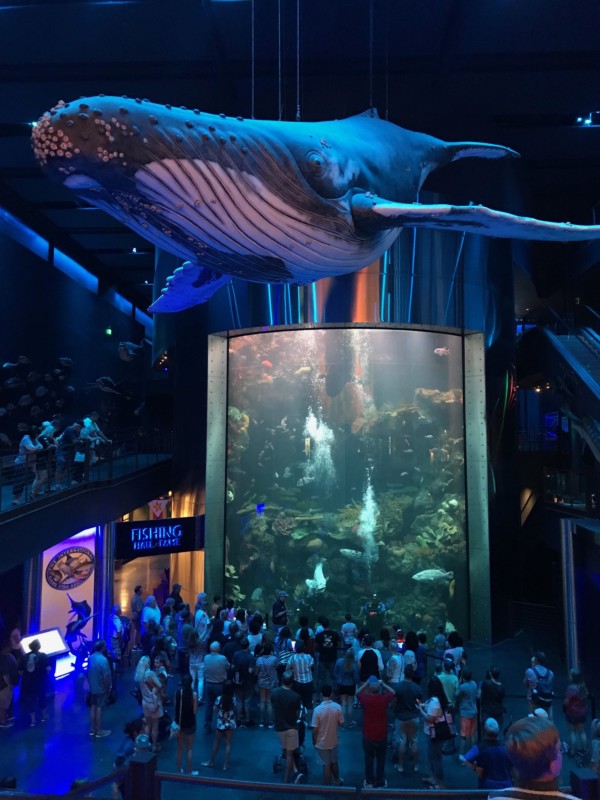 At this point, we exited to the left, where there’s a hallway dedicated to fishing championships. I was a little nervous, wondering if this was all there was to the aquarium because I don’t get too excited about fishing and you couldn’t see beyond the hallway until you’d turned a corner and walked up another flight of stairs. Oh me of little faith. Once we’d ascended the staircase and followed the crowd to the next space, I started to realize just how massive the aquarium was! 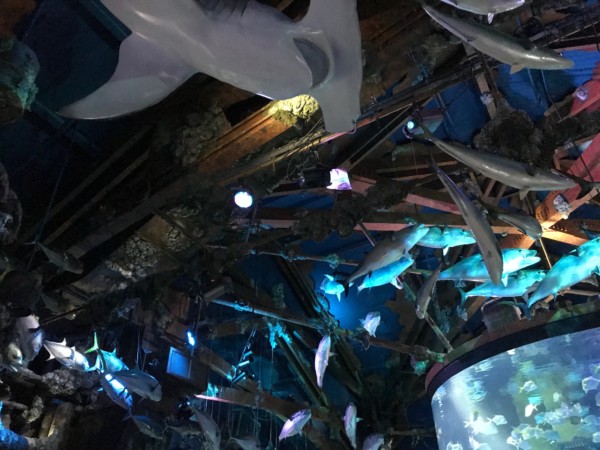 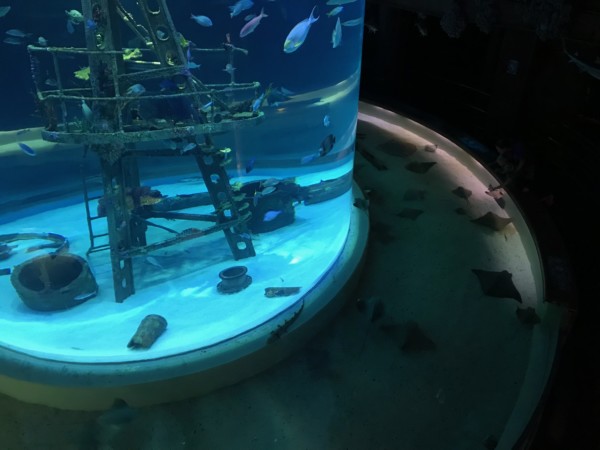 The two images above come from the Shipwreck Room–hundreds of plastic fish (and sharks!) hang from the ceiling; tanks line the walls of the room, and in the middle is a massive tank surrounded by a stingray touch tank! Also of note: There is a small snack bar in this room, serving popcorn, pretzels, etc. The room very much smells like the ocean and the walls are designed to look metallic and rusted, as though the entire room is a sunken ship!

Wonders of Wildlife’s aquarium is designed to take you through the major aquatic environments of the world; the first room with the sperm whale represents the Great Barrier Reef. Beyond the Shipwreck Room, you are taken through swamplands, rivers, mangroves, out to sea, an Amazon rainforest, caves, etc. Learn more here. 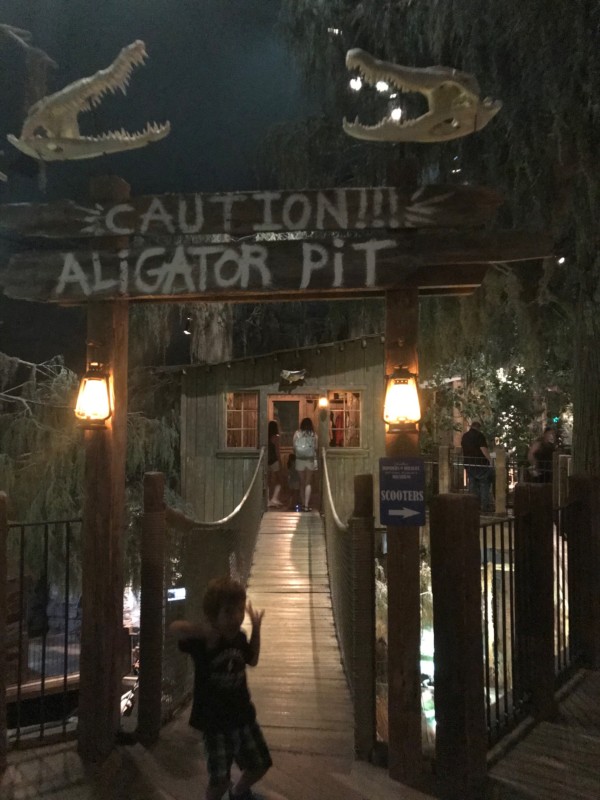 It’s a little difficult to get decent photos unless you have a camera that’s good in low-light conditions. But as you can see, the major rooms are designed to mimic the environments they represent–Joss loved running across the bridge here, and I loved the overhanging trees that helped convey the illusion that you were walking out-of-doors rather than in an aquarium. 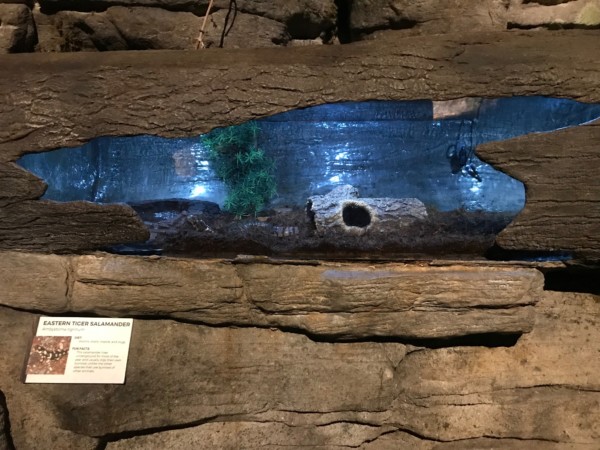 I loved how some of the animal habitats were built right into the scenery. There’s something to see everywhere you look!

A couple notes: Earlier I said that I was confused about just how large the aquarium was. However, other than that, the route was very clearly marked, with electric signs direct you to the correct exit. Also, there are a lot of restrooms, which is reassuring when you’re there with a young kid who may be too distracted by all the critters to remember that they have to “go”! 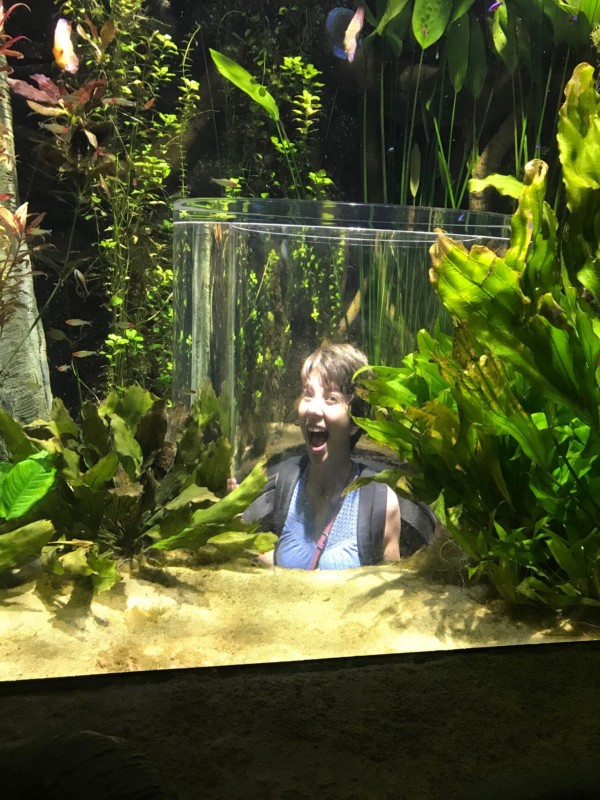 This was a tight fit, but there are many places throughout the aquarium where kids can get a submarine view of the exhibit! 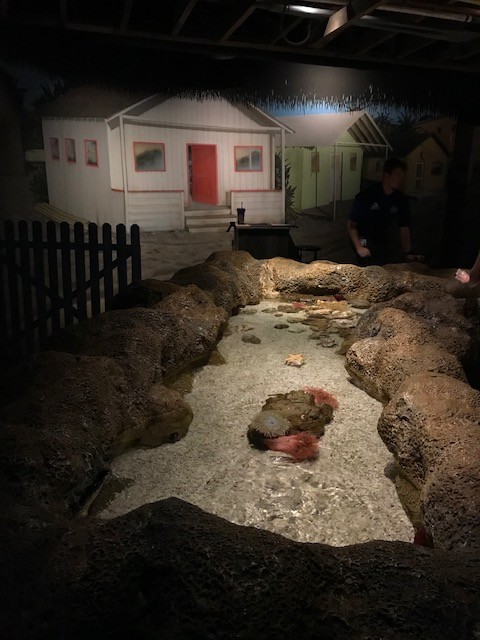 Besides the stingray touch tank, there was also this touch tank, which was overseen by an attentive employee. In addition to frequent restrooms, there are also Wonders of Wildlife staff members everywhere, so if you ever need anything, you should be able to get help quickly.

Whereas the Aquarium is inhabited by living fish and other creatures, the Wildlife Galleries are full of taxidermied animals. I did hear one high schooler telling her mom that she couldn’t understand how anyone could walk through the Wildlife Galleries and think it was okay to be surrounded by dead animals, from muskrats to elephants. 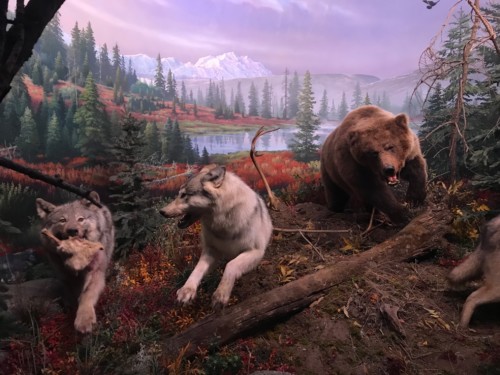 I asked our Wonders of Wildlife contact for the museum’s official response to this critique, because it was something that ran through my mind as well. She responded: “The animals throughout the museum were acquired from private collections or donated from zoos after the animals died from natural causes. Every animal featured inside Wonders of Wildlife was responsibly acquired in accordance with local, state, federal and international laws.

The animals inside Wonders of Wildlife’s wildlife galleries provide a still, close-range view that most people will never get to see in zoos or in the wild. Showcased in immersive habitats, these animals capture a specific moment in time providing visitors an opportunity to experience that moment fully in an incredibly powerful and engaging way. Taxidermy provides an opportunity for connecting and learning about wildlife and conservation.” 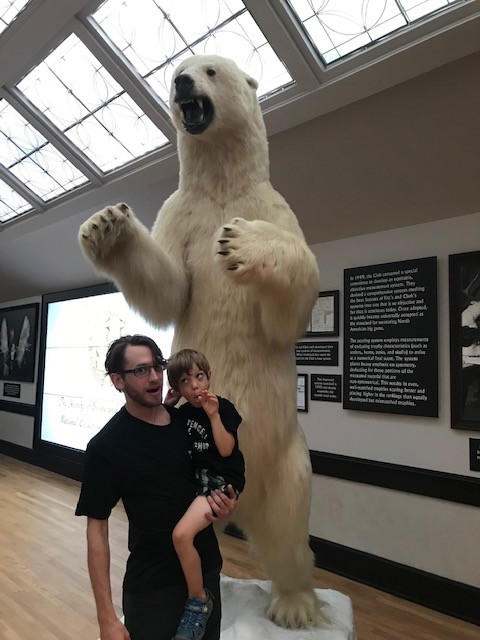 One of the rooms was full of deer (again, taxidermied)–and I was surprised to see that some of the deer were decades old. So they weren’t all shot in the last ten or even twenty years–some where from the early 1900s. Kind of amazing that they have been preserved for so long. 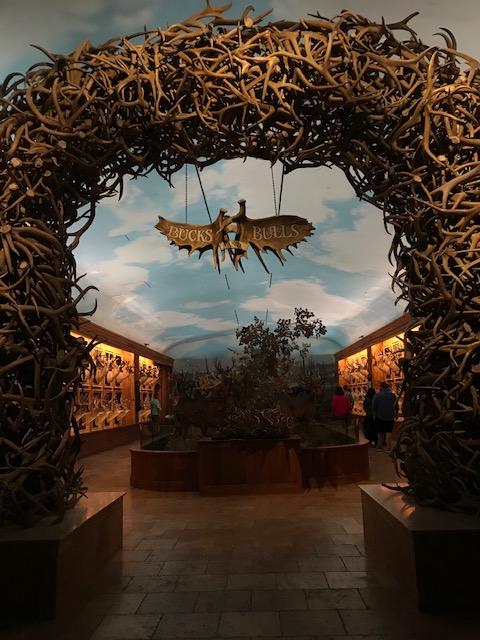 Bad photo, but this is the “Bucks and Bulls” room–deer heads on the walls and then in the middle are full-sized deer.

My favorite part of the Wildlife Galleries was the first section, which showcased out National Parks through dioramas. Having been to very few national parks, it was fun to get an idea of the different wildlife they house. Time to start planning some more trips! 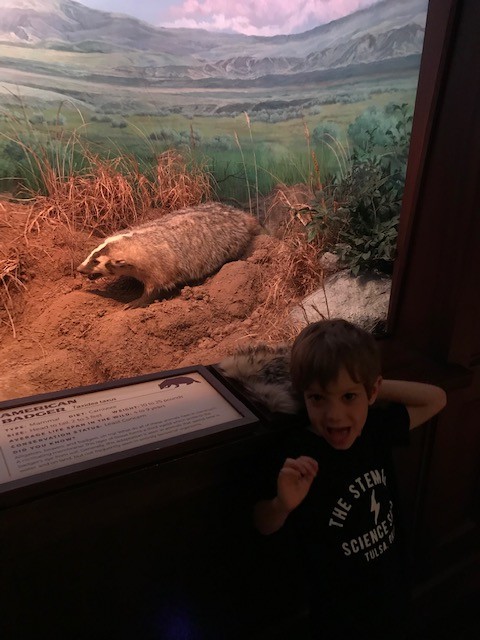 Some of the dioramas also had animal fur next to the information cards, which was a nice interactive element for the kiddos! 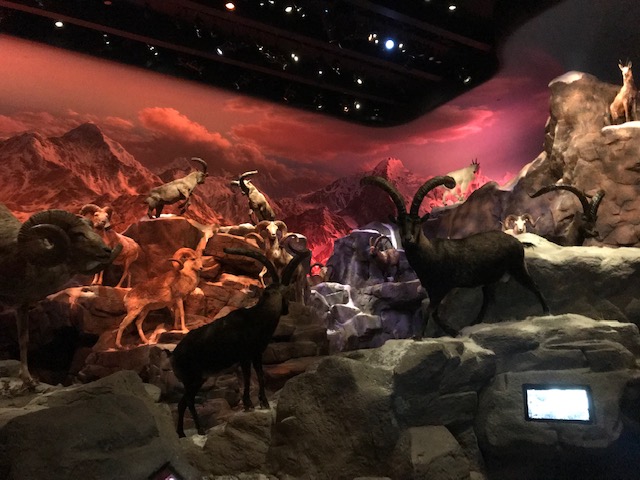 I also loved the sheep room–again, not a great picture, but this was a large room full of sheep from all over the world, floor to very tall ceiling. Like the official statement said, “The animals inside Wonders of Wildlife’s wildlife galleries provide a still, close-range view that most people will never get to see in zoos or in the wild.” I had no idea that there were so many different kinds of sheep–and how big some of them are!–with such a variety of horns, etc. It was truly impressive.

Also, as you can see in the photo above, the Wildlife Galleries are lined with iPads that you can use to get more information about the animals on exhibit. They’re very user-friendly. 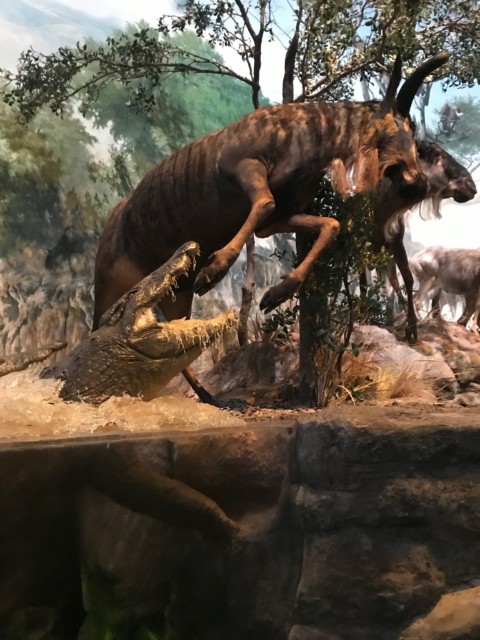 If you can get past the fact that the animals in the Wildlife Galleries are all dead, the way they are displayed is really amazing. I loved the movement in the photo above–that you can see the alligator both underwater and the waves it creates as he lunges toward the wildebeest. You can’t touch the animals, of course, but you can get very close to them! I already mentioned how the sheep room helped me realize how large sheep can be–but the same is true for the giraffes, elephants, etc. You just can’t get this close to these kinds of animals in most contexts! 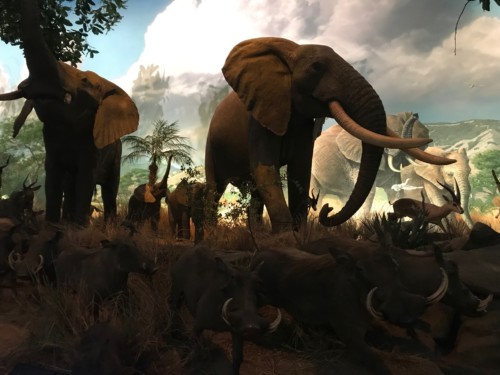 Well, that is all for now! If you’ve read this and want a chance to win 6 tickets to Wonders of Wildlife yourself, fill out TulsaKids’ Readership Survey! It should take you less than 5 minutes to complete–and will only be available through September 7. Learn more here. 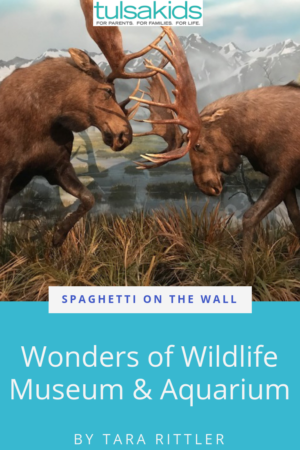