Why It’s Okay to Have Mixed Feelings About Your Kids:

It Doesn't Mean You Love Them Any Less

Shout out to all you parents who survived the first week of school and all the kids who got up and suffered through six boring hours of class and a dozen or more social media post pics from doting parents.

I lined my little dumplings up in their new uniforms (tl;dr, new job, new school, ch-ch-changes), crisp khakis against bold red polos, taking in their handsomeness. Noah is nearly my height–he will outgrow me by the end of the year, I’ve no doubt. Lucy’s two braids gave her an Anne of Green Gables quality, my failed attempt to camouflage the frizz from her wild curls.

Arthur’s near-waist-length hair was pulled neatly into a single thick braid down his back as he tried to conceal his Pokemon book by tucking it beneath his backpack. That’s what happens when you set the bad example of sneaking in purse snacks into the movies and the ballet. You create a new generation of serial sneakers. Books into school, sodas into museums, and pretty soon you’re on the HOV lane to H-E-double-hockey-sticks. 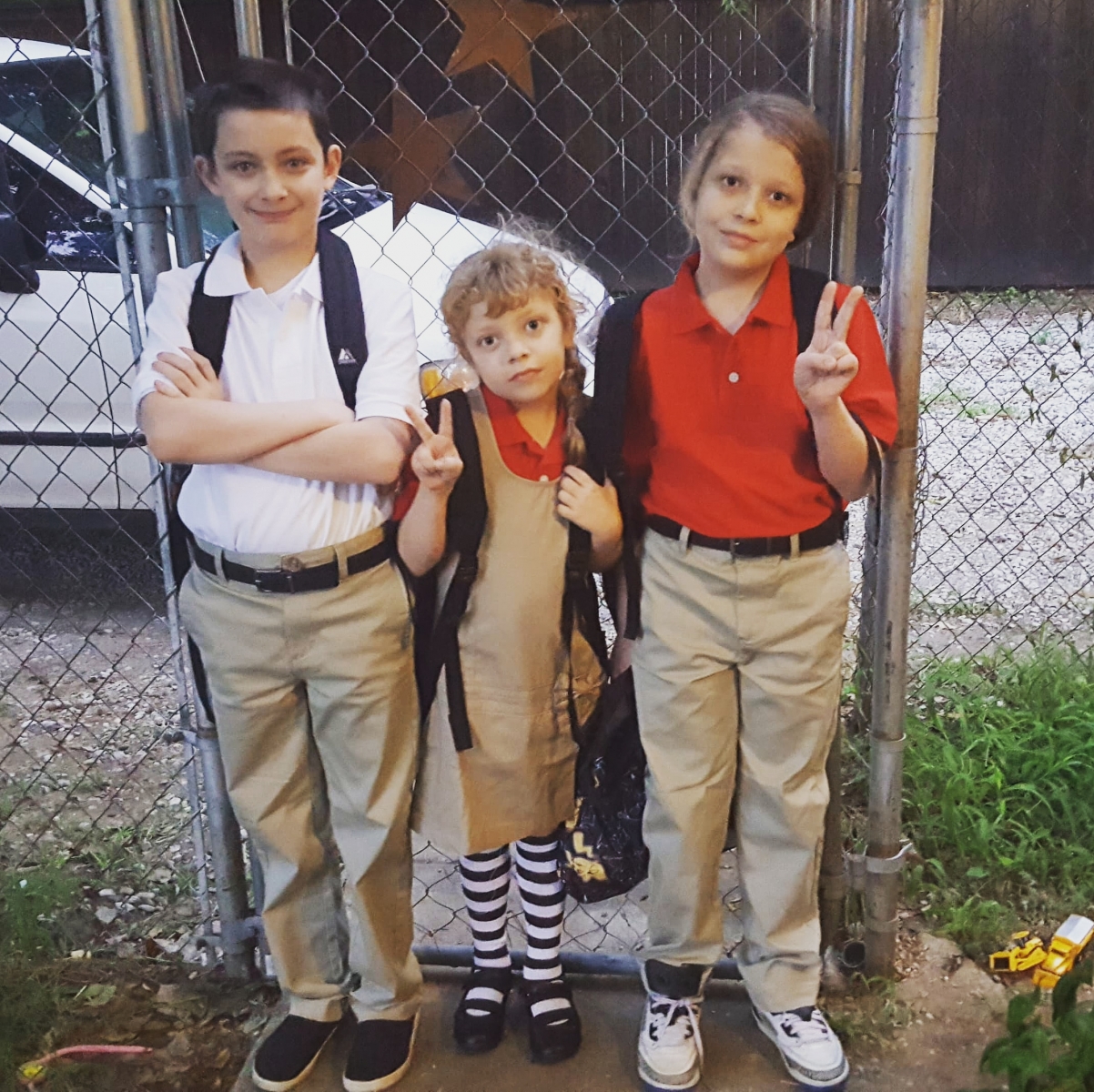 Last night, Lucy decided to try roller skating in the house while her dad and I were preoccupied with making dinner and writing, respectively. “Babe,” I told her, “You can’t roller skate in the house. You’re gonna get h–”

I don’t know which was more distressing, the resonating clatter and thud or the visual of her suddenly dropping out of site to the ground behind my laundry hamper. I rushed up in a hurry before the first howl escaped her round, frantic lips, to see her in a crumple, a 2-inch raspberry-colored scrape like road rash across her side.

Although with a genetic penchant for theatrics, Lucy is a fairly tough cookie ordinarily, so to see her in such pain gripped my lungs with heartache. I scooped her up onto my bed where I had been working, dressed her booboo, and hugged her close through her sobs. I played Bob Ross on Netflix to calm her down, and she snuggled close to me, whispering about how magical his trees are.

“Mommy,” she told me, wrapping a strand of my hair around her finger and playing with it. “You’re my best friend and I love you.”

In my Facebook feed this morning, a Memories post popped up from seven years ago. It was Lucy sitting on a chair dressed in a delightful vintage floral jumper that looked like something from Laura Ashley’s universe, her sweet round face framed by a peach fuzz widow’s peak and tinged with shine from drool. 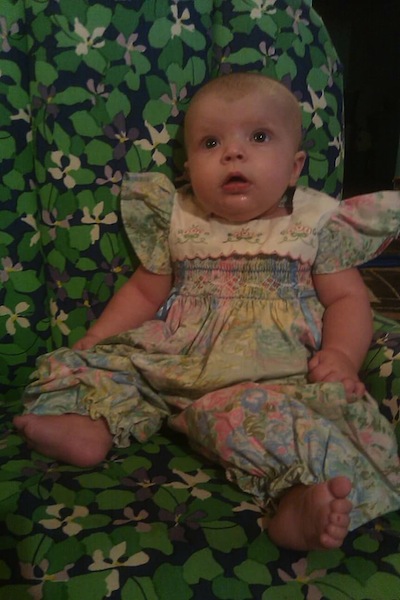 I took a moment to appreciate her cuteness before sharing it. What few people knew then, or know still for that matter, is that despite loving her profoundly, despite having desperately wanted that child and having deep anxiety about being away from her even for a moment, back then I struggled with not always feeling connected to her.

When Arthur was her age, he and I were inseparable from the moment I came home from my five-week hospital stay. Even after I was released to go back to work, every moment I was home, he and I were together. It was Mommy and Arthur lying around cuddled up watching Doctor Who, sharing an avocado, splashing in the kiddie pool, trying on hats at Wal-Mart. We understood each other in a deep, spiritual way almost as if we had known each other in a former life and were finally together again at last.

Then Lucy came along, Lucy my light-bearer, my golden, glowing child, and she felt far away to me. Arthur’s lo-fi, even-tempered nature brought a calm to every room, but Lucy was mercurial and intense. She was a neon highlighter, a spicy curry, a free radical whipping about, punching holes in the fabric of reality.

I didn’t know what to do with her–I felt exhausted, frustrated, and eventually, guilty. I felt guilty for a long time, and even ashamed. For several years, I couldn’t look at that photo without feeling it burn through me like a savage GI bug, and in a way, that feeling of guilt about my failures as a mom stole something from both Lucy and me.

Seven years ago, Facebook tells me. Time is a funny thing, like Neosporin. You can’t tell it’s working when you put it on, but eventually, you notice you can barely tell where the cut was to begin with.

Now when I look back at that photo, I am much more magnanimous with myself. The wisdom of age is the wisdom of learning to forgive yourself, especially as a parent.

I was never a bad mom to Lucy. I just didn’t feel like I connected with her when she was a baby, and that was enough to hate myself for.

I went back to work when Lucy was a few weeks old. I was managing the student writing center at TCC Metro, a job I loved completely. If I had been able to strike a decent work-life balance with that job, I might still be there today. After my work day ended, I taught classes a few nights a week, bringing my workload up to around 50 hours once you figured in the time I spent grading papers.

Plagued by the same milk production problems I faced with Arthur, I had gone back to work armed with a high-end breast pump, immediately covering up my office windows for privacy. Almost immediately, campus police stopped by to tell me I would need to uncover the window for security purposes. I had fought back tears all afternoon. I knew I couldn’t fight it–my direct supervisor was the same person who had answered my report of a sexually harassing student by coldly instructing me to do a better job of covering my cleavage, telling me it appeared I was trying to “entice” students.

I would be lucky to get an ounce of milk at a pumping. I knew taking down that window cover meant I was done breastfeeding Lucy, and it hurt. If I had to choose between nursing my baby and my job, my job won out–this was in the thick of the recession when jobs were scarce and looming layoffs omnipresent.

Not long after that day, my brother called me and tearfully begged us to take custody of Noah while he worked out his finances and prepared a home for the boy, who was exhibiting the first outward signs of autism at the time. The decision to take custody of Noah drew us into a vicious custody battle with my parents that would consume our lives for most of the next year. It was punctuated by the moment I received a call at work telling me my brother had died of sepsis, changing the course of our lives–and Noah’s–forever.

I’ve written about this before, how I was a zombie in those days and lived in a state of completely jacked anxiety. The meds I took to quell the near-constant panic attacks dulled my mind and worsened my exhaustion, but without them, I don’t believe I could have even functioned.

I was averaging about 4-6 hours of sleep a night through the week and catching up on the weekends. I would stay up grading and working and be often woken up by my babies during the night. Noah took most of our attention in those days, and I worried I was failing him as well. It was a hellish existence, and even now, my memory of it is a blur.

Better days were on the horizon for our family, but things would get much worse before they got better. In a few of my other posts, I’ve alluded to The Dark Years–think Frodo on the last half of his journey to Mordor dark.

So dark, in fact, there are some things my husband and I just never discuss. Things like that year and a half we spent living in a fifth wheel while I was caring for my dying mom. I have many thoughts on tiny house living, which I may share with you one day after I work through them thoroughly with a licensed therapist.

But living in that tiny house, the most magical thing was cosleeping with Lucy or playing Barbies or cars or cupcake bakers with Lucy. Lucy was energy and light and dreams, confetti and fluffy white clouds and bright sorcery pulsating with the love of the universe. One day, she told me how lucky she was that I was her mom.

I realized in that moment that just because it wasn’t easy to connect with Lucy didn’t mean I had failed her. Lucy had always felt my love and never the uncertainty.

It wasn’t until much further down the road that I learned how normal it is to feel that parental uncertainty or even ambiguity, and it doesn’t mean a parent loves his or her child any less.

In a Facebook moms group I’m in, I see these posts every once in a while. It’s usually a first-time mom, and she feels deeply remorseful because she’s frustrated by her child or exhausted or even disconnected. I’ve come to the conclusion that we pressure ourselves into believing there’s something wrong with us if that connection or positivity doesn’t come easy, but the truth is, parenting is difficult, and if life is pressing in around you, it can almost be asphyxiating.

It’s completely normal to have mixed feelings about being a parent. One more time for the people in the back: It doesn’t mean you love your child any less.

As an elder mom, I try to give other parents permission to not be perfect. It’s okay to have mixed feelings about your unruly toddler or the pregnancy you planned. It doesn’t mean you love your baby any less. It simply means you are a complex human being with a rich emotional life.

I have come to believe that if we nurture each other and allow ourselves to explore these complex feelings, we will be better parents in the long run. We will be better equipped to raise children–especially boys–who do not hesitate to honestly assess their own complex inner thoughts and work through them in healthy ways.

I try to take a few moments to sit with each of my children every day individually now. I encourage them to talk about their ideas and what is on their minds. It’s my chance to enjoy them individually, to give them affection and cherish these finite moments of childhood as they continue their path toward independence. But now, when I can’t relate to my kids or connect with them, I don’t let it get to me. They know just as I know that we are all doing the best we can and that above all, we love each other.

Even when we don’t understand each other, our family motto holds true:

“Together or not at all.”

Dear readers out there in the nebula, what have you felt conflicted about as parents? What have you learned to forgive yourselves for? I’d love to hear your stories. Leave me a comment and do your part to deconstruct the myth of the perfect parent.

Until next week, I wish you all happy days and the capacity to forgive yourselves and love each other. Cheers. 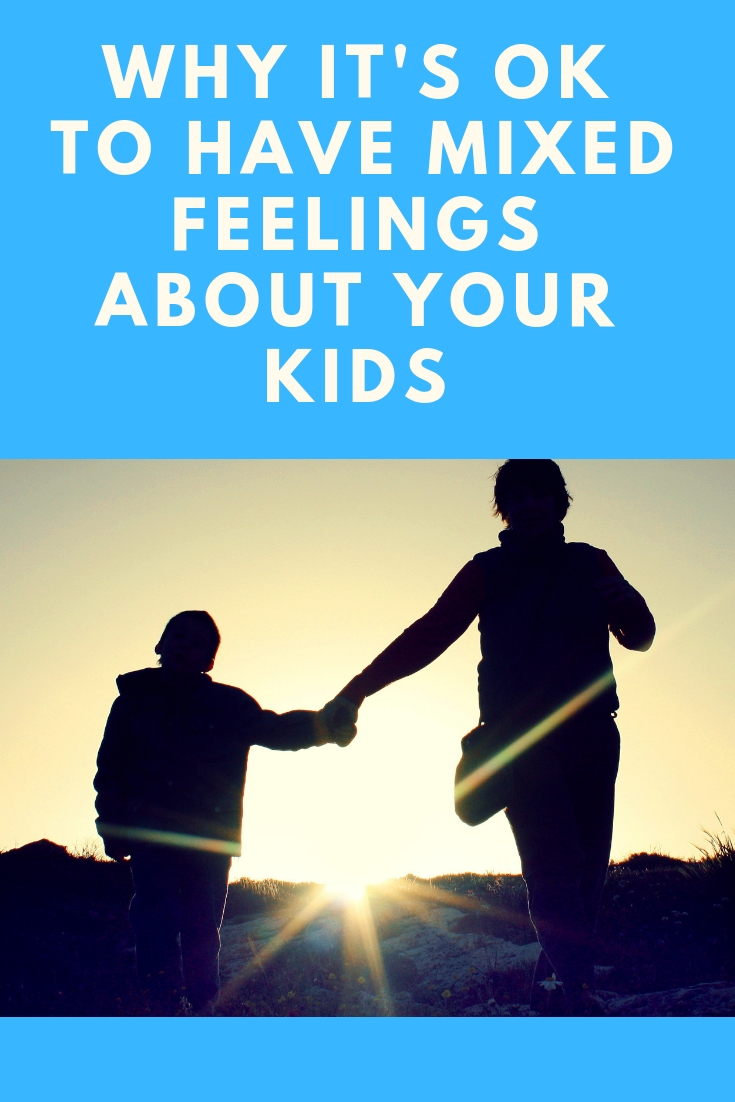