Why I let my seven-year-old wear makeup. 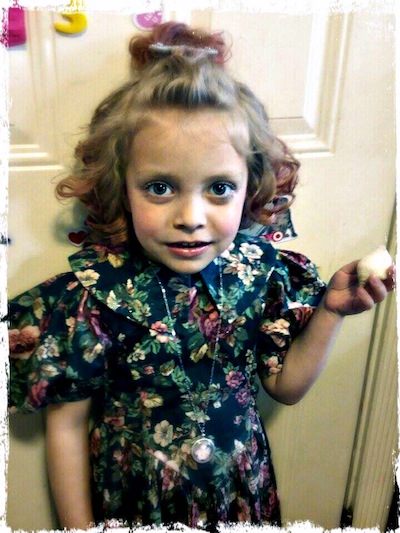 There were only one or two girls who wore makeup when I was in fourth grade, but I thought they were everything. It was about the age where I was starting to catch on how much shorter and rounder I was than some of the other kids and at the same time, kids were starting to be cruel, especially the boys.

I remember for Valentine’s day there were a couple of girls who had little “boyfriends,” which at that age just meant they liked each other and exchanged fancier gifts than the other kids. My mom didn’t like it, and she loudly questioned the logic behind that kind of parenting.

The same girls were the first to be allowed to wear makeup. It was the ’80s, back when makeup on the whole was not so subtle. For tween girls, this meant a little blue eyeshadow, a spot of bright pink blush, and some peach Bonne Bell lips. It was dreamy and beautiful and I was fixated on it. I foolishly I begged my mom for some eyeshadow just like the fabulous Cyndi Lauper (who I’m fairly sure is part unicorn). When I told her a couple of the girls were wearing it, she narrowed her eyes and spat out words I will never forget: “They look like little sluts.” 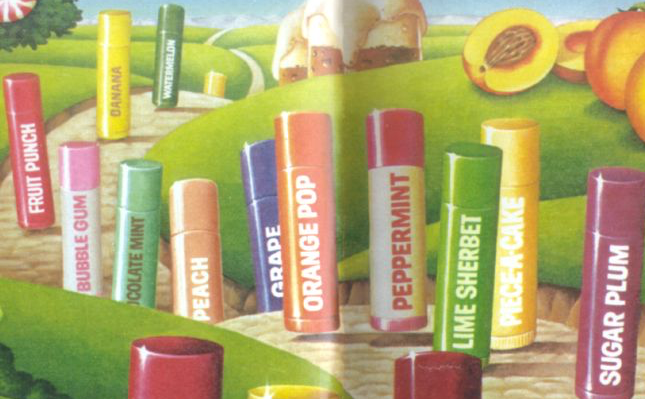 Without delving too deep again into my complicated relationship with my mother, she was a walking crash course in female-on-female misogyny (her opinion on women drivers was delightful). The word “slut,” used far too loosely, rippled through me with small, burning waves of embarrassment. She would use that word again for the rest of my adolescence to judge women of all ages for everything from wearing miniskirts to having the nerve to fall in love before their divorces from their no-good, lying cheating husbands were finalized.

I started wearing makeup around sixth grade, so I imagine my mom couldn’t have been all that convicted about it–the first blush and eyeshadow she bought me was with a coupon because it was a deal that was too good to pass up.

My mom’s relationship with makeup seemed both antagonistic and reverent; she had a vanity filled with Avon makeup (she was fond of things you could order through multi-level catalog marketing) and purchased it almost compulsively, but she rarely wore it. Like mine, her face was nearly pale as paper, which can make applying cosmetics a challenge.

I don’t believe anyone ever taught her to apply it (she never taught me–file it away in the massive cabinet of things we never discussed), and when she did wear it, for the occasional wedding, church, important school meeting, it was almost an act of self-loathing, applied in violent, aggressive strokes with an over-thickness. With her thick, spider-leg lashes, frosted, too-high monochromatic eyeshadow, and stern, broad face, she seemed almost frightening.

The bathroom near my classes at Foster Middle School was bleached in dim fluorescent lights, giving it a sickly morgue quality. My friend Sam taught me to apply two colors from the recommended palette: a dark denim navy at the outer edge of the lid and the yellowy beige of working man’s pants on the inner area, split geometrically and halfway up to the brow. The same look is sported by Joan Cusack in Working Girl and could be best described as “business carnival chic.” It paired nicely with the ginormous bangs I curled with a curling iron and then back-combed with a rat-tail comb until they stood two inches high.

When the movie Beaches came out, I developed a new love for a bright peach and rose palette inspired by the Divine Miss M, one I still love today. My friend Miranda introduced me to foundation, the acne-hiding miracle of my adolescence. I still get nostalgic about the chemical-and-perfume smell of Cover Girl with Noxema.

Doing my makeup was a pure pleasure, a daily experiment with art. I loved the lightly perfumed powdery smell of my apricot-hued blush, the way the mascara made my eyes pop. It was a simpler time for casual makeup wearers; you could get by with five or six items in your Easter-egg-colored Caboodle kit: an eyeshadow duo, a basic blush, foundation, concealer for all of those awful teenage zits, mascara, and a frosty pink lipstick. 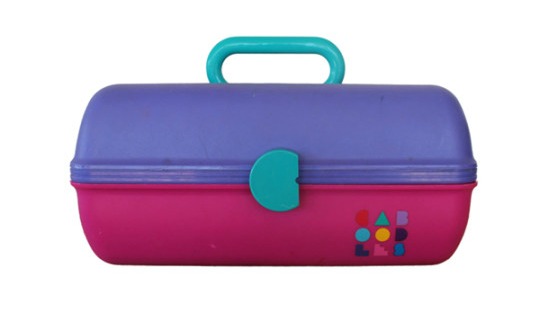 In the mid-’90s, everything went deliciously darker, with matte lipstick the color of bricks and blackberries and Raisin Rage. Then in the late ’90s, things got cosmic; I wore a brilliant teal eyeliner and shiny, holographic lipstick with glitter gel I picked up at Frederick’s.

Every era brought new and beautiful makeup, and I always was thrilled to get my hands on a Vogue highlighting a new trend. As I got older, I no longer felt obligated to wear makeup, concerned that someone would say I looked tired or sick (and they would–one male coworker told me disdainfully that I was “letting myself go” when I eschewed makeup while at work to give my face a break while working in the hot kitchen of Olive Garden) or God forbid see my splotchy chicken pox scars; I no longer worried about people thinking I was looking for attention when I wore a funky shadow. It was none of their business.

By the same token, I no longer needed the problematic (if well-intended) assurance, “But you look just as pretty without makeup.”

It was something I wore on my terms, for fun, for the pure joy of it, for me. I had reclaimed it for myself.

My mom’s relationship with cosmetics, on the other hand, had always been one of obligation. She wore makeup grudgingly under the belief that a woman’s natural face was not acceptable to a wider audience. Maybe if she hadn’t been made to feel that she was so inadequate by the countless representations of women all around us every day, she wouldn’t have been so ready to slap labels on other women.

Early last week, Lucy came bouncing out of her bedroom for school in a bright green Minecraft tee with dark black eyeshadow in what could best be described as Juggalo flapper-core.

“Lucy, did you do your makeup?” I queried, fighting back a laugh.

“Yes, but I messed it up a bit,” she responded confidently. “Can you help me?”

Dutifully, I retrieved a cotton pad from the cabinet and dampened it with a tiny bit of water and a drop of soap. I left the thick parts on the lid, the work she meant, wiping away the dark smudges by the brow and underneath. Smoky eye is hard as heck to pull off, friends.

I was proud of her. She made art, and she was excited to wear it. She was claiming her face before she’s old enough to be told she can’t wear her makeup too dark or her skirts too short or boys and men will be distracted, like people aren’t responsible for their own minds and behavior.

And if the boys ever want to experiment with makeup, that’s fine, too. Some of the boys at the high school are wearing makeup these days, and some of my favorite guys have embraced the glam: Bowie, Robert Smith, Justin Furstenfeld, Elvis Presley, Prince.

Lucy never had to ask me if she can wear makeup because it’s simply not a taboo in our home and because we allow our children to take ownership of their own bodies. Just like Arthur’s long hair, we don’t wish to regulate our children’s expression of individuality.

The power to claim our own bodies and lives begins in the confidence we instill at an early age. It is the power to understand that the way they dress does not give anyone else the right to abuse them. It is the power to feel amazing on their own terms, without other people’s permission or authority. It is also an opportunity to realize that other people dress or do their own makeup for their own purposes, not for anyone else. Allowing my kids to dress themselves how they want, down to their hair and makeup, gives them the freedom to determine how they wish to express their own identities and the ability to respect the way others choose to do so. It is also a subtle but important step in dismantling harmful social constructs that perpetuate violence against and objectification of both women and men. 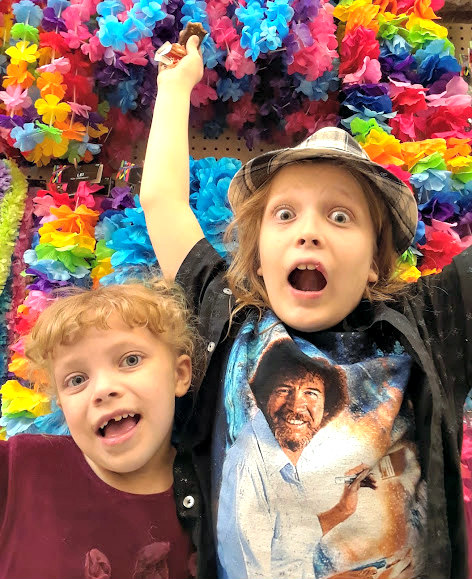 By allowing my child to form her own relationship with makeup and self-expression (and just for the heck of it, let’s say the boys, too), I am teaching her (them)–before anyone else can–that makeup is not sexual or an invitation for anyone to objectify another person. It’s just another tool of personal expression. Most importantly, it’s also super freaking fun.