Whoever Fits In Wins

Sitting in my warm, sunlit living room, I heave my 13-year-old son’s overstuffed black and yellow backpack into my lap. He hates it when I do this, but I’m determined to find the missing assignments he insists are lost.

He leans toward me on the edge of our grey sofa opposite from me, his arms crossed in a tight self-hug in his grey hooded school-issued sweatshirt. His blue eyes scowl, and his lank dark blonde hair, in need of a trim, hangs over his eyebrows.

Out of the backpack, I pull crumpled schoolwork, artwork, balled up tissues and snack wrappers that spill crumbs onto the carpet. As I pull out his assignment planner, I notice it is cut up. Further down into the bag, I find twisted pens, and pencils snapped in half. His blue pencil bag is also sliced up.

I glower at him, waiting for an explanation, wondering what could have happened to provoke this. My 8th grader sighs and tells me that he was in another part of the classroom for a group project. When he returned to his desk, he found the contents of his backpack torn up and strewn around the floor.

“Who was sitting at your desk?”

I can feel blood rushing to my ears. An undercurrent of rage twitches treacherously behind my left eye.

“How Christian of them,” I say. The word trickles slowly off my tongue like a drop of acid. The destroyed plastic of his pencil bag crinkles as I tighten my grip.

“Did you tell the teacher?”

I despise bullying behavior, but the hypocrisy of it happening at my kids’ parochial school somehow infuriates me more. I understand that some kids are as broken as the smashed contents in this backpack and turn their hurt on others. But, I also believe that some kids in a quest for attention, get twisted satisfaction out of humiliating another in front of an audience of peers.

I think about the anti-bullying lip service painted in fat loopy marker on colorful posters that hang in the hallways at my son’s school, reminding students to “Be Kind” and consider “What Would Jesus Do?”

Turns out you can post gentle reminders, hang a large cross on a wall and trot students to weekly religious services, and some will still operate under the assumption that only those who fit in win coveted spots in middle school hierarchy. To remind who is where in the pecking order, they play a little too rough in P.E. They talk over or ignore the perceived weak link attempting to join the conversation at lunch. And, they mutter profanities as they purposely bump into their target in the hallways.

Instead of getting angry about the rejection he feels, my son delivers his grief like a rain-drenched puppy dropping an old dirty bone on my doorstep. He wonders what is wrong with him. He wishes he was dead. Disgust for these tween cretins tightens like a clenched fist in my stomach. I respond in a gravelly voice that there isn’t a damn thing wrong with him. I wrap my arms around his broadening body in a tight hug and urge him to focus on the kind kids because they are there too.

The ripped up school supplies are the latest slap to my son’s spirit. He’s a quirky, gentle kid who struggles with organization and has little interest in school or sports. At home, he spends hours in his room sketching cars, and architecting elaborate structures on the computer that he brings to life with Legos. He prefers to spend recess sitting on the curb with a pencil and drawing pad in his lap, rather than throw himself into the fray of wild, yelling boys roughly kicking balls and shooting baskets. He stubbornly refuses to trade his strong opinions of right and wrong for fleeting like-ability.

As much as my son wants me to ignore this latest transgression, I can’t. I contact the teacher, the school counselor and administration. The staff apologizes profusely and insists they will get to the bottom of the situation. Later, they do learn who destroyed his things, but they refuse to identify the student to me. No parent forces their kid toward an apology nor are any reparations offered. We move on and count the days until middle school is over.

A few months later, just before school lets out for the summer, my son tells me how he stood up for a boy, who only a week before had been lobbing pencils at his back. For some reason, another irritated classmate called the boy an idiot during passing period.

“Considering what a pain he’s been, why would you stand up for him?” I ask. I’m certain I would never have been so charitable.

“No one deserves to be treated like that, Mom,” he says.

As my son piles out of the car on his last day of middle school hauling his backpack, which is once again spilling its guts, he chirps, “I love you, Mom.” Before I put the car into gear and drive away, I watch as he cheerfully greets a teacher aide, who has been particularly supportive of him this year. Unlike me, he doesn’t seem calloused by the challenges he’s faced these past couple of years. Rather, his resilience, strength and optimism are stronger and brighter than ever. Maybe whoever fits in wins in middle school, but whoever loves harder, ultimately wins in life.

Christa Melnyk Hines is an internationally published freelance writer who writes frequently about health, wellness and raising kids. Visit her at www.christamelnykhines.com 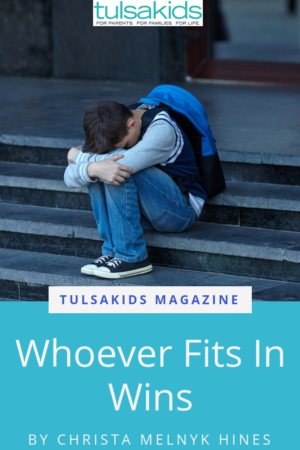