Although I love listening to podcasts, I’ll admit to having shied away from most parenting podcasts. I don’t have a good reason for this (possibly a stubborn desire not to be told how to parent by who-knows-who comes into play), but as Joss is getting older, I have been thinking that maybe I should give some a listen. Because when you feel like you’re generally “winging it” as a parent, a little extra advice probably can’t hurt! (On that note, what are some parenting podcasts that you’d recommend?)

But this is not a blog post about parenting podcasts except for the fact that the book I’m writing about was written by Hillary Frank, host of “The Longest Shortest Time,” an award-winning parenting podcast, with contributions from parents all over the world–including Tulsa’s own Margaritte Arthrell-Knezek, founder of Under the Canopy and writing contributor for TulsaKids.com! Which is how, not being a listener, I first heard about “Weird Parenting Wins.”

I was intrigued by the title–I like weird, and I liked the fact that it focuses on parenting wins and not #momfails–so I got on Amazon and purchased a copy. It’s a quick read–each chapter is broken up into multiple mini-stories, so it’s easy to pick up and put down as needed–and the advice can apply to parents of children anywhere from infants to teens.

So the chapters cover everything from soothing infants to calming fears about death to sibling rivalry to encouraging your kids to communicate with you, even when you’re “not cool” anymore.

Frank writes in the introduction, “Now, nine years later…I know that how-to parenting books are just suggestions. You take what works, leave what doesn’t…In the beginning, though, I naively assumed those prescriptive books held the answers…And when those answers didn’t work I felt like I must be doing it wrong.” She goes on to write, “The truth is, as we get to know our kids, we figure out what makes them tick. It’s not going to be the same for me and you….We have different life experiences, different belief systems, different kids. But I guarantee you we’ve got something in common. The most effective tools we use to raise our kids–they’re weird…Maybe someone else’s weird parenting win will work for you, or will inspire you to try something new the next time you’re stuck in a parenting rut. Or maybe some of these will just make you giggle…” (p. 5-6).

I think my favorite thing about this books is the idea that it might inspire you if you’re stuck in a parenting rut. Because obviously, reading this made my search my memory for my own “weird parenting wins,” and so far I haven’t been able to think of any. But as Joss grows older, I want to make sure I keep pace, parenting-wise–because I know his needs as a preschooler are much different than his needs as a baby, and sometimes I really just feel like I-hope-I’m-doing-okay-but-who-knows?! And often, although we like to get out and have adventures in Tulsa, our days do look very similar–and I like what’s comfortable–so it would definitely be easy to fall into a rut or to feel like we’re already there.

Before I recount a couple of my favorite Weird Parenting Wins from the book, one thing you should know is that many of them involve parents making slight fools out of themselves, haha. I think the lesson is that you can’t take yourself too seriously when you have kids–and also that kids are highly amused by parents saying words like “poop” and doing unexpected things in public like dancing at the bus stop (when they’re younger, of course). A lot of the wins simply involve using a little imagination–explaining that monsters won’t hide under your bed if you sleep with a clove of garlic; encouraging kids to play pretend as a way to snap them out of a bad mood; using a silly voice yourself to get them to take notice, etc. Several of them also involve mild-to-moderate deception (like telling your child it’s illegal to be too noisy in a restaurant)…so depending on your stance on that, some of these weird wins may make you squirm.

Here are a few weird parenting wins that stood out to me:

1) From the chapter on getting your kid to eat stuff: A mother from Canada determined that her kindergartner’s random refusal to eat certain foods was a control issue…since they were often foods he had liked previously. Her solution was to give him one dinner veto each week; if he used his veto, he got to eat a peanut butter sandwich that night–but he had to eat what was presented to him every other night of the week. If he went the whole week without using the veto, he got a “golden ticket” at the end of the week. And once he got four golden tickets, they would go see a movie together. She said that he never used a veto and after a few months, he didn’t need the system anymore. (p. 44)

2) In a section on getting your kid to stay in bed (something we are currently dealing with at our house!–my solution is to try to bribe him with the promise of a Batman book that he picked out from Amazon, if he can stay in his own bed the whole night for one week): A mom from Illinois said that her daughter’s teacher suggested she and her daughter make a chart of things that her daughter gets to decide and things that mom gets to decide. The daughter got to decide things like what to wear, what to play with, what music to listen to, etc. She said that they made this list as long as possible so her daughter would feel empowered. On the mom’s side of the chart (which was much shorter) were important things like “wearing a seat belt and when to take medicine”–and when to go to bed. She said they read the chart every night, adding to it as needed. (p. 85)

3) I like this one because it reminds me exactly of fighting a boggart in Harry Potter (especially Neville making his image of Snape wear his grandmother’s clothes): Basically, when a woman’s son got a scary image stuck in his head, “We talked about ways to make the monster not so scary. So, in our minds, we started dressing it up. He suggested a baby bonnet and a pacifier. Then he added a blown-up swimming donut and clown shoes…” See? Exactly like Neville’s boggart! Ridiculus! (p. 95)

4) The Confidence Binder: A woman from New Jersey said she made her son a Confidence Binder because he had a paralyzing fear of failure. She wrote him a poem about his personal heroes and how they made mistakes, too, and then she also made a chart that he filled out by recording three daily successes and one mistake, which they would talk about together, discussing how to improve next time. Failure is scary, but I think this sounds like a great way to teach someone that it’s not the end of the world–both because it’s not the biggest thing in your life and because it’s possible to move on from it. Maybe we all need a Confidence Binder! (p. 158-159)

5) Probably my favorite is one mom’s idea to, instead of just trying to get your kid to tell you about their day, tell them about yours, too! This gets the conversation started and it won’t be so one-sided.

6) Finally, I liked this one because it is so simple but sounded very effective! In the chapter on getting your kids to communicate with you, a woman from Ohio said that she would simply be doing a jigsaw puzzle whenever her teens came home from whatever activity they’d been doing. They’d end up coming over to help her, which gave her the opportunity to ask about their days, etc. (p. 173)

So those are just a few samples of the weird parenting wins that have worked for other parents. It’s cool how the advice comes from parents all over the world, which is a nice reminder that there really is a huge community of parents facing the struggles you may be facing, and that there is hope that it can get better…even if that means getting a little weird. 🙂

If you have a weird parenting win you’d like to share, please do so in the comments! Or if you’ve read the book, what are some that you’ve tried or think you may want to try someday? 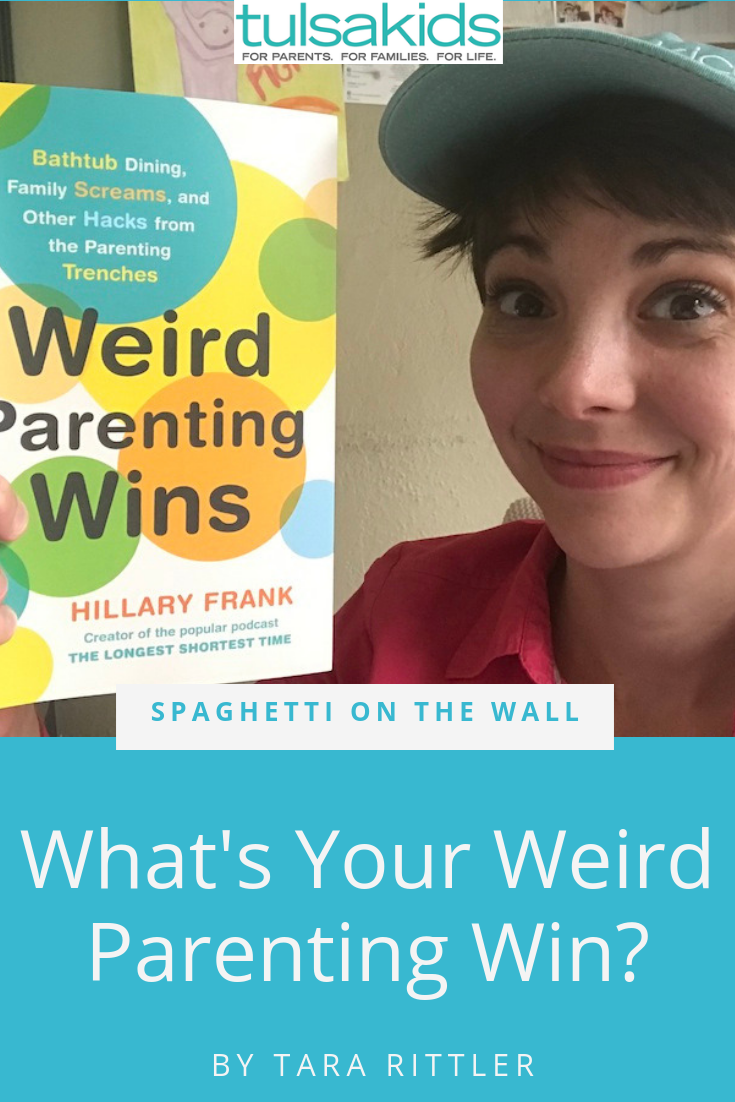