What Two Penguins Taught Me About Friendship

"Ping and Pong Are Best Friends (Mostly)" by Tim Hopgood is a tale of friendship, jealousy, and personal value.

One of my all-time favorite children’s books is “Ping and Pong Are Best Friends (Mostly)” by Tim Hopgood. Joss has recently discovered a love for it, too, so I’ve been graciously sharing it with him, although it isn’t his book, it’s mine, and I will never fully surrender it to the whims of tiny, sticky hands! 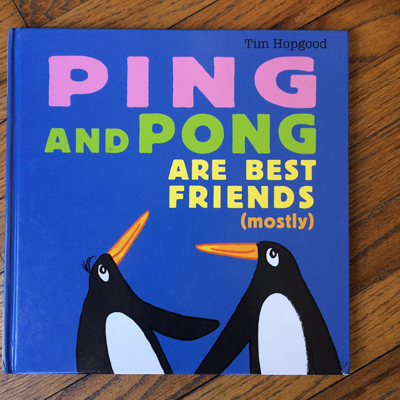 *Ahem* To be honest, I bought this book well before Joss came along. I was child-free if not carefree, had recently moved back to Tulsa after a rather trying year away and was adjusting to a new job and all the new relationships that come along with that. When I ran across “Ping and Pong,” I knew I had to have it.

Ping and Pong are two penguins who are also lifelong friends. One penguin, Pong, is a true Renaissance penguin. He can “squeak nine different languages,” he catches sharks when he goes fishing, and he absolutely cannot sit around the house all day “doing nothing.”

I identify with Ping, the second penguin.

Ping tries. Ping tries hard. But he just can’t keep up with Pong. When he bakes, his cookies burn. When he goes fishing, he catches minnows. And he is learning to squeak French, but it’s just so frustrating when your best friend is already an accomplished linguist!

I know this is a children’s book, but how many adults can honestly say that they never compare themselves to others? Who can say truthfully, “I’m perfectly satisfied with myself and my accomplishments”? Who has never been jealous of someone else and been tempted to let that jealousy get in the way of an amazing friendship?

It’s not like I burn cookies or go around feeling badly about myself, most of the time. But I highly doubt I’m ever going to be at a place where I never feel somewhat invisible next to a more gregarious friend, or where I never worry about how everyone else is probably writing their next great novel while I’m bingeing “Murdoch Mysteries” on Netflix.

One day, Ping decides that “Enough is enough.” Because he’s never going to be the best at anything, he’s not going to do anything. Pong misses Ping and writes him a letter asking if he would like to come and play. The letter helps Ping realize that he misses his best friend, too, and when he’s ready, he bakes/burns cookies and visits Pong. Naturally, Pong has baked a gigantic, beautiful, Martha-Stewart-worthy cake for Ping, on which is written, “To the BEST friend in the world.”

The book ends with this line: “And at last, Ping realized he was the BEST at something after all.”

I find this interesting because, from reading the book, it’s not clear that Ping IS “the best friend in the world.” Pong is a better friend, to be honest. He’s the one who moves to reconcile with Ping after Ping gives up on everything, including his friendship with Pong. Pong could probably find a better friend if he went looking; who knows? But Pong believes Ping to be the best friend in the world, and his faith in Ping gets Ping out of his funk and back to enjoying life.

But it’s also a good reminder that when we despair over not being the best at something/anything, we are probably forgetting that we may be having a positive impact on others, even if it’s in a more subtle way. I’ve been tempted to get jealous of friends who are more outgoing/brilliant/energetic than I am, and I literally feel pale in comparison. But some of those same friends have told me that they really value my friendship, and it’s true. Not everyone has to be a Pong. Pings have their own value and make their own mark on the world.

What children’s books have you read that reflect your own – or at least realistic – friendships? Who are some of your favorite friends from literature?