What Is Baby-Led Weaning?

With some trepidation, I followed my daughter down the path of baby-led weaning. Now, I am a total convert.

Sometimes I get a little stuck in the past. The ’70s was my era–halter tops, disco and platform shoes, I embraced it all. The ’80s were a baby blur for me, I totally disconnected from popular culture and instead, fully immersed myself in the parenting culture. Wanting to be the best parent I was capable of being was my motivation on the good days, struggling to not drown in the demands of mothering on the tough days; I read Dr. Brazelton’s books (the child guru of the era), joined parenting groups and sought the advice of my mom and sisters.  Thirty years later I’m the grandmother, and much of the information I used to parent my children is no longer current. It can be a struggle to let go of the mindset of doing things the way we’ve always done them and open ourselves to new ideas and practices. My daughter and son-in-law do their research, I trust their opinion and I’m willing to suffer through a few growing pains as I learn and adapt.  Because I help with child care it’s very important we are consistent with my grandson’s care, so when my daughter discussed baby-led weaning, I listened with some trepidation but also with a willing attitude to change.

My first question was the obvious, What is baby-led weaning? Thirty years ago we were assured our babies would sleep longer if we fed our four- month-old babies cereal. With the vision of an uninterrupted night of sleep dangled before us like the golden ring on a carousel, we eagerly shoveled rice cereal and then pureed foods into our infants that couldn’t even sit unassisted. Baby-led weaning is a different approach. The American Academy of Pediatricians now recommends no solid foods until six months of age, whether you choose baby-led weaning or traditional pureed foods. The concept of baby-led weaning is skipping baby foods and letting the child go straight to eating what the rest of the family is eating (with a few exceptions to be listed later). Before you embark on baby-led weaning, the child needs to be sitting independently and be able to grasp objects. By six months, the tongue thrust reflex is mostly gone (which causes them to push foreign substances out of their mouths) and their intestines have developed the necessary digestive enzymes to absorb solid food. In baby-led weaning the child sits in the high chair and feeds themselves. They are offered portions of what the rest of the family is eating; foods like vegetables are cut into finger size portions that are easier for the child to grasp.  The use of a spoon is also incorporated quickly. The spoon can be preloaded but the child must feed themselves.  I was amazed how quickly my six-month-old grandson learned to use a baby spoon.

My main concern was choking. I was told choking was very unusual, but to assuage my fears I went online to refresh myself on infant CPR and what to do if an infant does choke.  In the first few weeks he did gag numerous times, and it worried me until my daughter taught me the difference between gagging and choking. If it’s gagging, you will see that the child is coughing and attempting to push the food out of their mouths. As long as they are making noise, they are fine and no intervention is necessary. If a child is choking, they will be silent because no air is getting through (which translates to no breathing) and they will appear panicky. I admit, one time my grandson was gagging and I prematurely scooped the wad of bagel out of his mouth, but I promise I appeared calm, of course I did (cough, cough). The good news is that gagging becomes less frequent within a few weeks of eating as they learn to chew and swallow.

Why choose baby led weaning? What are advantages to this method over feeding the pureed foods?

As Dr. Phil says, “No matter how flat a pancake is, there are always two sides,” and there are some negatives (besides the dreaded gagging) to baby-led weaning.

There are some safety tips that need to be observed. As with any type of feeding, there are certain foods that should be avoided to prevent choking: nuts, whole grapes, cherries, apples with skin and any foods such as fish that have small bones in it. With all babies under one year of age, absolutely no honey and nothing made with honey. Make sure the baby sits upright in the high chair and never leave them unattended. Discuss the baby-led weaning plan with your pediatrician before beginning to make sure your child has no contraindications. 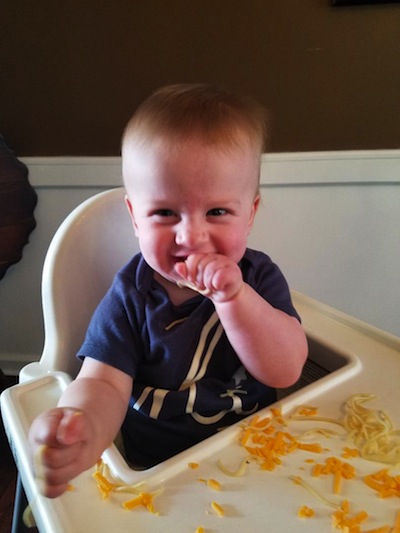 My seven-month-old grandson has now been eating real food for a month, and I am a total convert. Going out to eat with him is so much easier; he sits in a high chair and happily feeds himself and drinks out of a sippy cup. He has already experienced a wider variety of foods in this last month than I did in the first twenty years of my life. He has had saag and Naan bread at an Indian restaurant, Pad Thai and tofu at a Thai restaurant, quesadillas and bean burritos at a Mexican restaurant and lentils and teff bread at an Ethiopian restaurant. At home, he loves spaghetti and spinach, scrambled eggs, rice and broccoli. So far, his parents have chosen to avoid salty and sugary foods so he doesn’t develop a preference for them, but I’m sure that rule may be bent for his first birthday. What would a first birthday party be without a big cake for the birthday child to smear all over his face?