Unicorns, Rainbows and the Sugar High

Is there really such a thing as a sugar high? Many parents and teachers believe that eating sugar causes children to be hyperactive and to misbehave. You may be surprised to learn that this is a myth that has been repeatedly debunked since the 1990s. Yet, it is still widely believed today.

How did this myth begin? In the 1970s, doctors were beginning to treat children who suffered from ADHD (Attention Deficit Hyperactivity Disorder) with stimulant drugs. Parents were concerned about the side effects of Ritalin and amphetamine. A 1975 best-selling book, “Why Your Child is Hyperactive” by Dr. Ben Feingold, described how a child would become wild and uncontrollable after birthday parties and during holidays. Feingold linked the hyperactivity to the increased level of sugar intake during these events. Concerned parents wanted to help their children without the negative effects of drugs, and they began to restrict sugar instead.

In 1994, a rigorous study was done to explore the possibility of sugar affecting the behavior of children. This study included children whose parents described them as having sensitivity to sugar as well as children who didn’t show these signs. This was a large double-blind study. Some children received a diet high in sugar, while the placebo group was given a diet sweetened with artificial sweeteners, such as aspartame. Parents, children and the members of the research team were not aware which children belonged to which group. Urine tests were given in order to confirm that the diets were being followed properly.

The study, published in the New England Journal of Medicine, concluded that sugar had absolutely no effect on a child’s behavior or cognitive function. The following year, an analysis of all published studies came to the same conclusion. Studies continue, but no correlation has ever been found between sugar intake and behavior or cognitive function.

In spite of the scientific evidence, this myth remains popular today. Some parents are convinced that they see their children become hyperactive after eating sugar. One theory is that parents are seeing this because it’s what they are expecting to see.

As a parent, and a teacher, I have my own opinion. I believe that children hear adults talking about how sugar makes children “hyper,” and children live up to this expectation. It almost gives children a legitimate excuse to misbehave. I have had my students tell me things like, “Sugar makes me bounce off the walls!”, something they’ve likely heard at home. They will frequently make these statements before classroom parties. I regularly respond by telling them that they should avoid the sugar if it will cause this behavior. Since they don’t want to refrain from enjoying the treats, they manage to eat the sugar without becoming hyperactive.

Both of my sons were very active, and were diagnosed with ADHD, as children. They were both born in the ‘90s, and were diagnosed well after these studies were published. Yet, I remember being advised to limit their sugar intake. I did experiment with the idea. I never noticed a difference in their behavior. They seemed to be hyperactive all the time, regardless of their sugar intake.

What Parents Can Do

Many of these “sugar high” episodes seem to involve birthday parties, holidays and other special occasions. Isn’t it possible that the children are just excited about these events? Armed with this new information, parents may need to reexamine their expectations for the behavior of their children. If you have discussed this myth with, or in front of, your children, you might want to tell them that you’ve now discovered that it wasn’t accurate. This will let children know that you expect their good behavior, even after eating sugary treats. You might even wish to tell them that, if they are going to bounce off the walls, they need to avoid the sugar. This method has worked wonders for me in my classroom.

Too much sugar can lead to many other health problems, such as obesity, diabetes, and heart disease, so there are many good reasons to limit the amount of sugar your children consume. However, the mythical sugar high isn’t one of them. 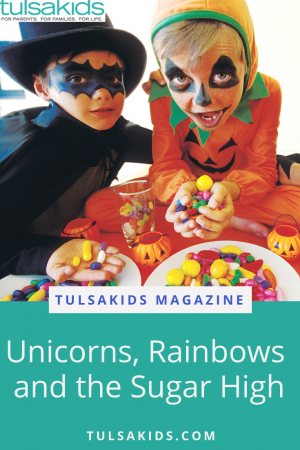