On February 9, I finally crossed “Join one of Tulsa Foundation for Architecture‘s 2nd Saturday Walking Tours” off my bucket list! If you’re interested in learning more about Tulsa history and supporting TFA, an organization that works to preserve Tulsa’s architectural heritage, then you should consider adding one of these walking tours to your own bucket list! The walking tours change monthly, focusing on different historic districts in and around downtown Tulsa–from the Tulsa Arts District to the Deco District, etc., etc. March’s tour will take participants along Main Street downtown, focusing on how much it has changed since Tulsa’s early days. Learn more here. 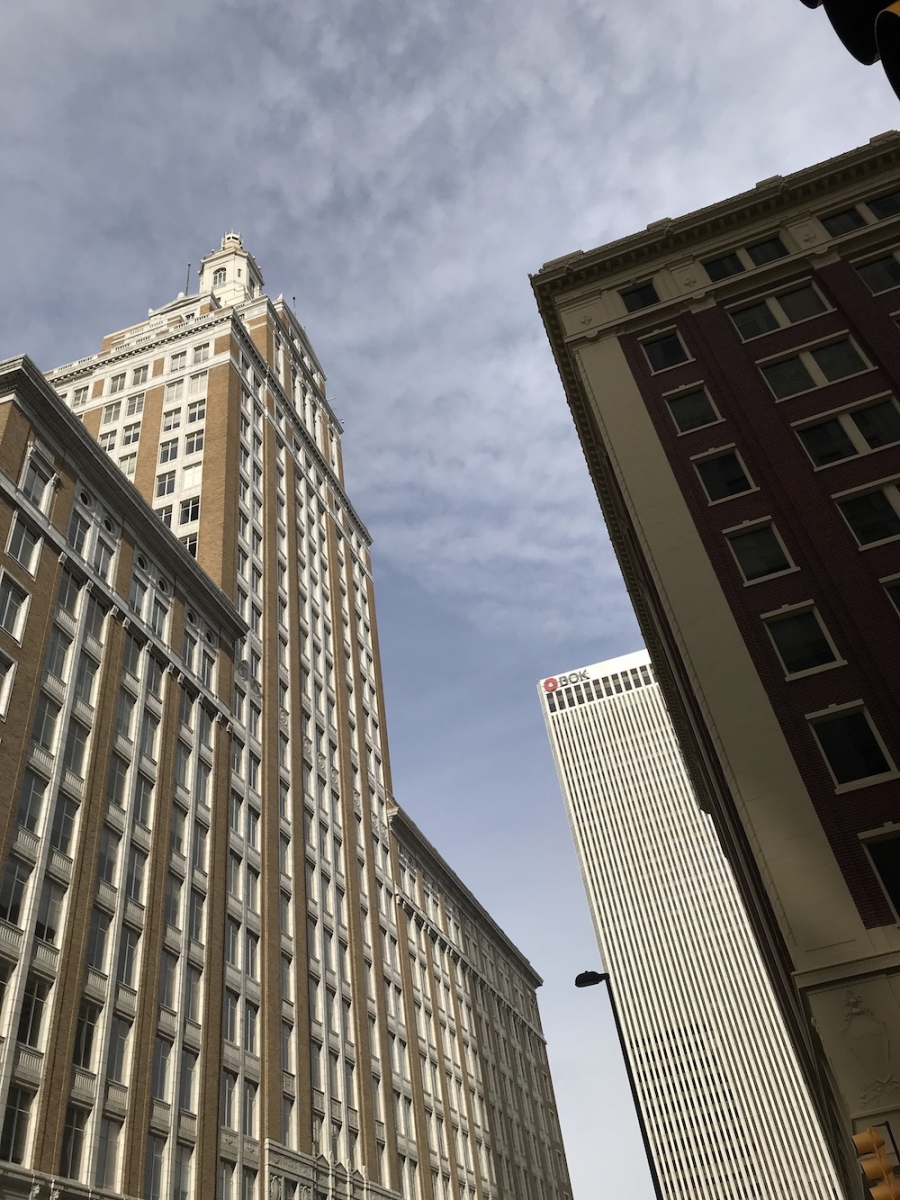 February’s tour route is arguably the most popular: the Downtown Tunnel tour. According to TFA Director Amanda DeCourt, if I remember correctly, the Tunnel Tour sold about 950 tickets in just one day. It usually sells out, so I was lucky to snag a couple! And in case you’re worried, there are multiple tour groups throughout the day–so you won’t be in a tour group with 1,000 people! Just sign up for the time slot you want when you purchase your tickets.

The Tunnel Tour tickets were $18 for adults, which is slightly more than the usual $13, due to the tour’s popularity. Kids 12 and under, however, are free–but make sure you sign up for a kid’s ticket so they know how many people to expect in each group. All proceeds benefit TFA.

Ready to check in!

The Tunnel Tour left from the Philcade Building at 5th and Boston–conveniently, Topeca coffee has a cafe here, so if you show up early enough you can grab a latte before the tour! Or, in our case, a cookie after the tour to thank the small and architecturally-oblivious child for doing as well as could be expected. 🙂 Different tours leave from different locations, but I think grabbing a cup of coffee before the event is usually an option. 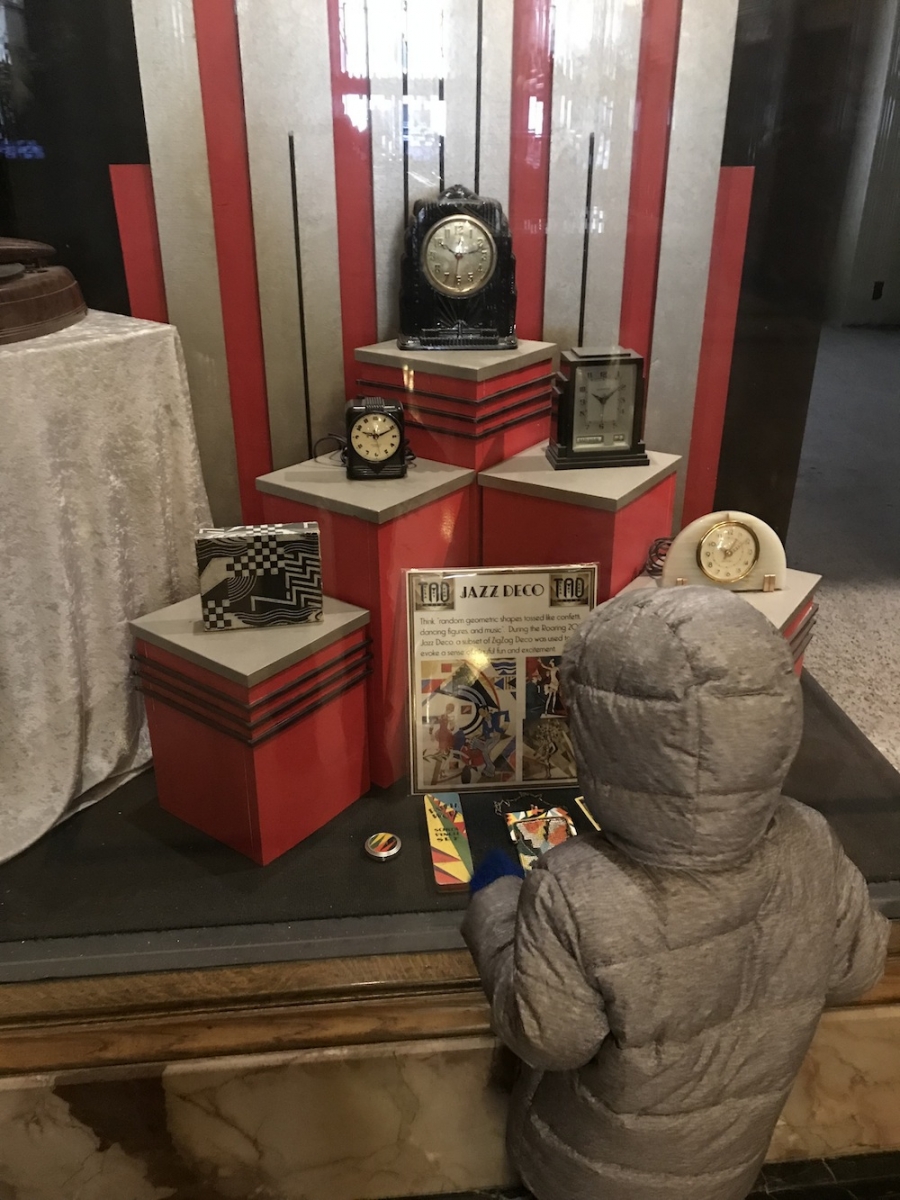 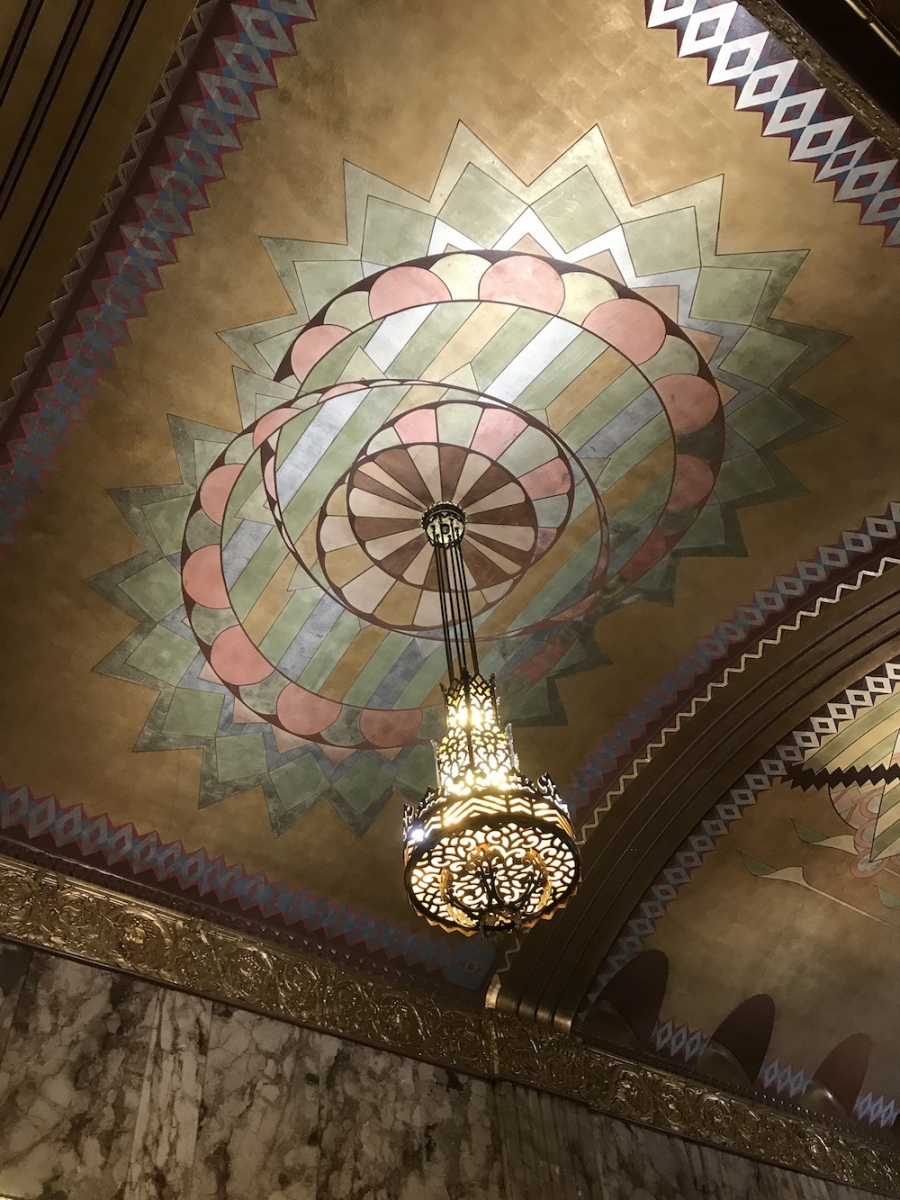 We enjoyed looking at some of the historical displays in the Philcade Building before the tour…and fell in love with the gorgeous ceiling!

Here is where I will mention that, although kids 12 and under are free, that doesn’t mean that it’s necessarily easy to take a wriggly almost-four-year-old on a one-hour walking tour. So bear that in mind! However, since you are moving around and there is a lot to see, it wasn’t too bad. Joss’s main disappointment was that we didn’t visit the sewer as part of our tunnel exploration. 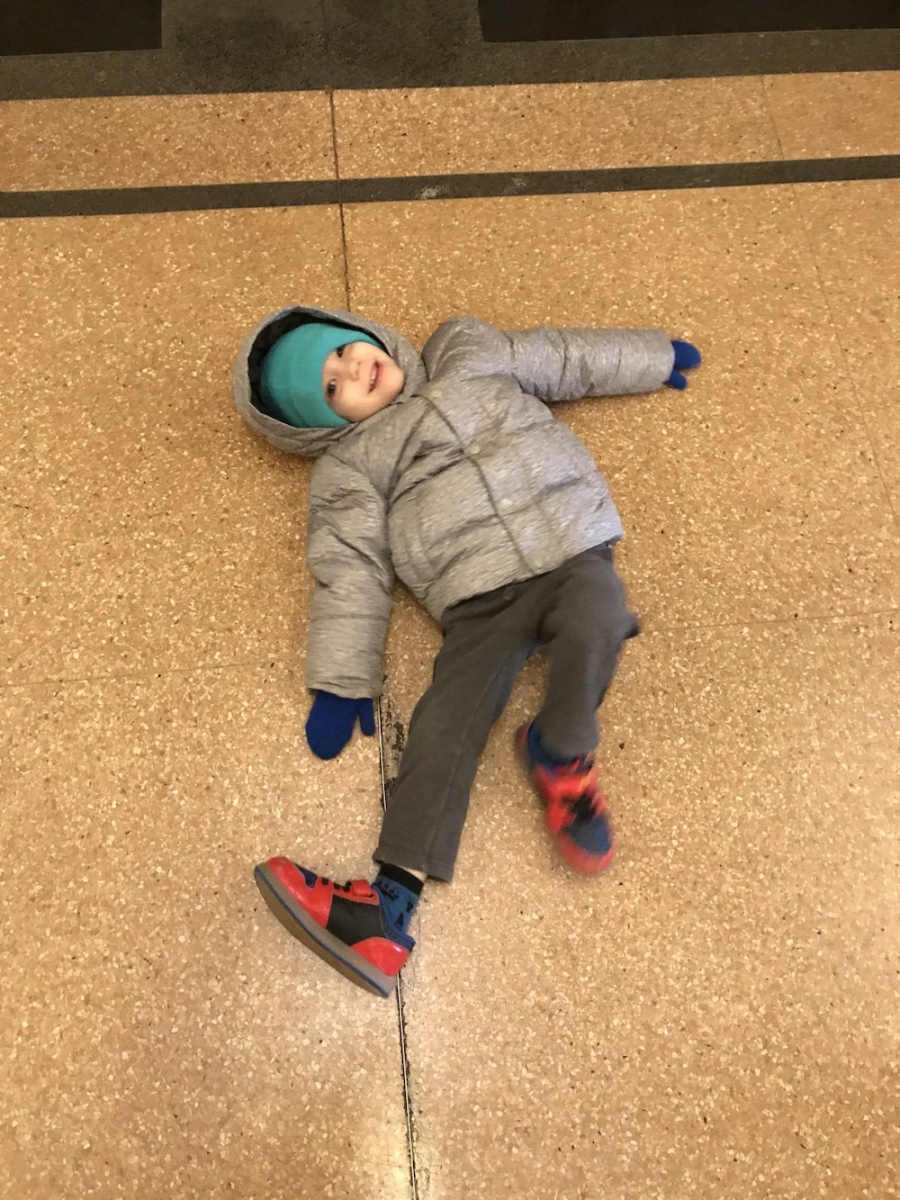 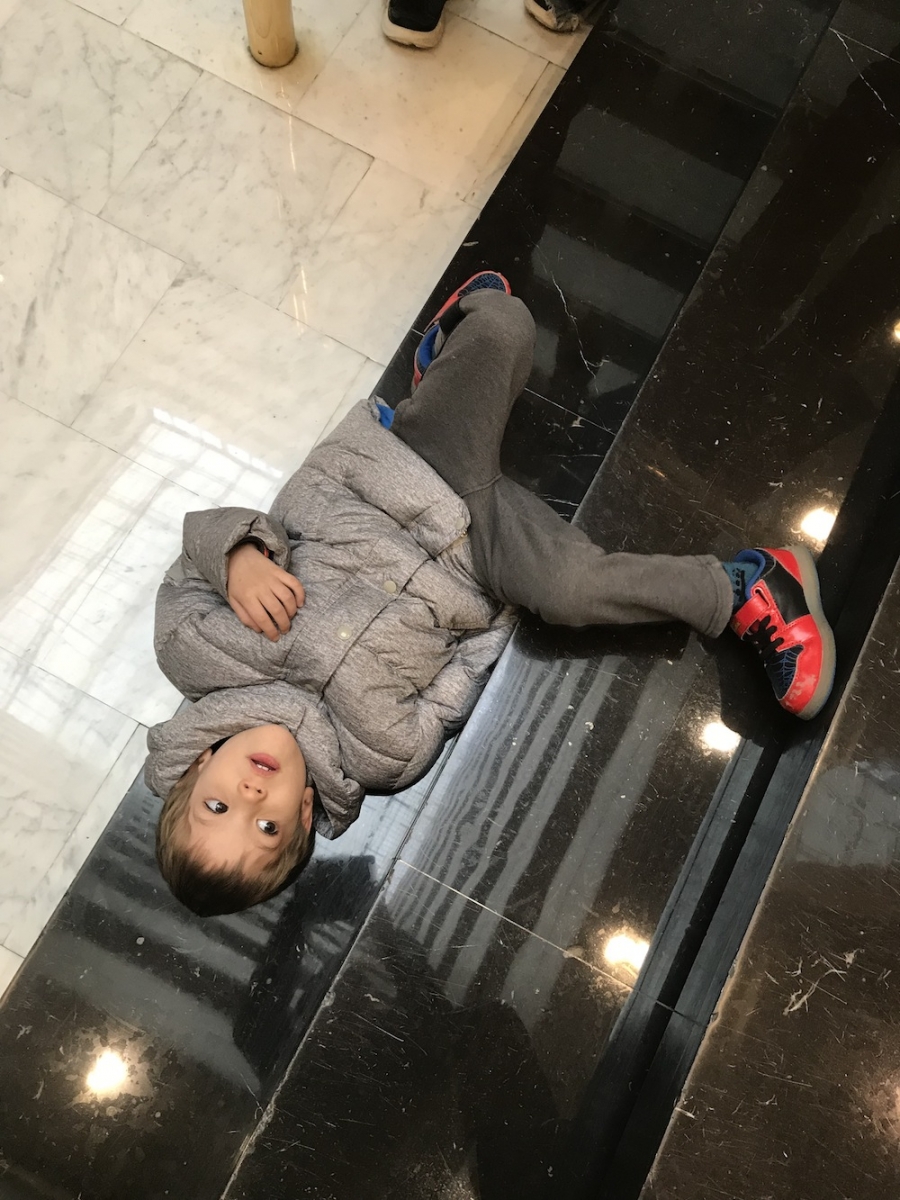 He did end up on the floor a couple times…

The first stop on our tour was the Bank of Oklahoma building at 3rd and Boston. (After this, I got so turned around I have no idea where we were until we got back to the Philcade. Although that’s my fault because they did provide us with a map!) 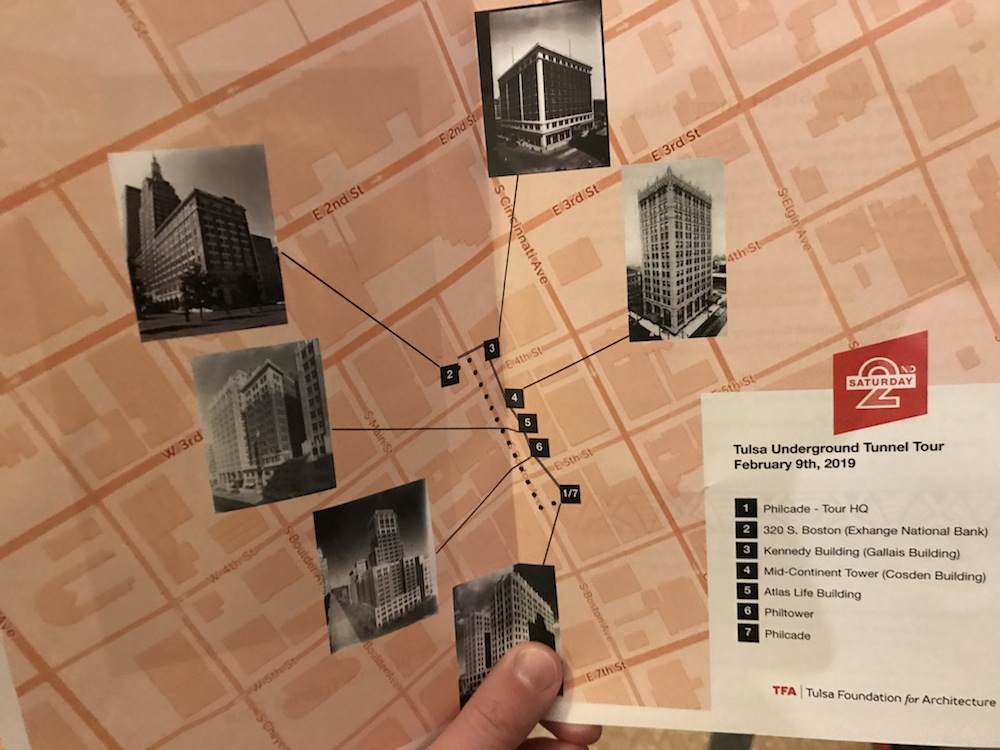 One feature that stood out in all of the buildings was the elevator doors! The art deco elevator doors were all different and all beautiful! It’s a shame no one’s making elaborate golden elevator doors these days 🙁 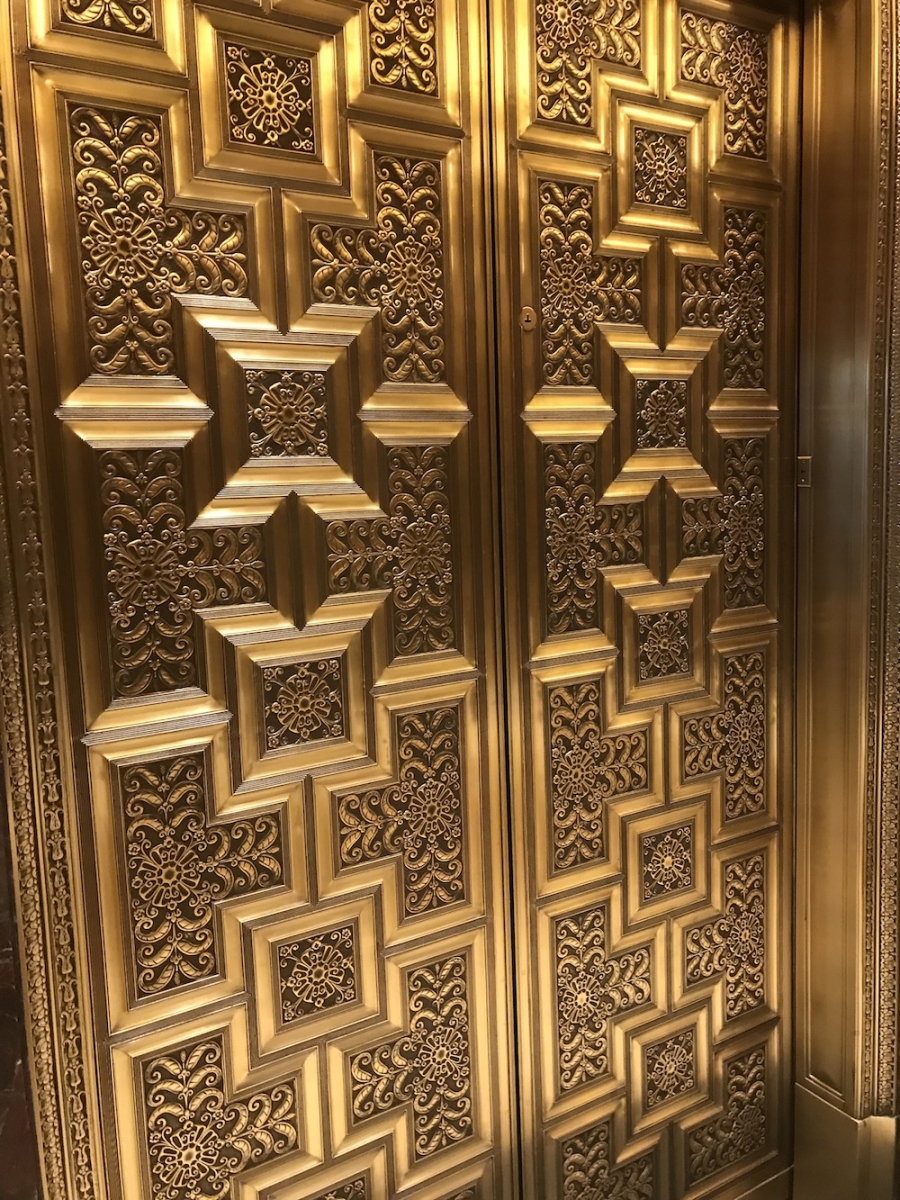 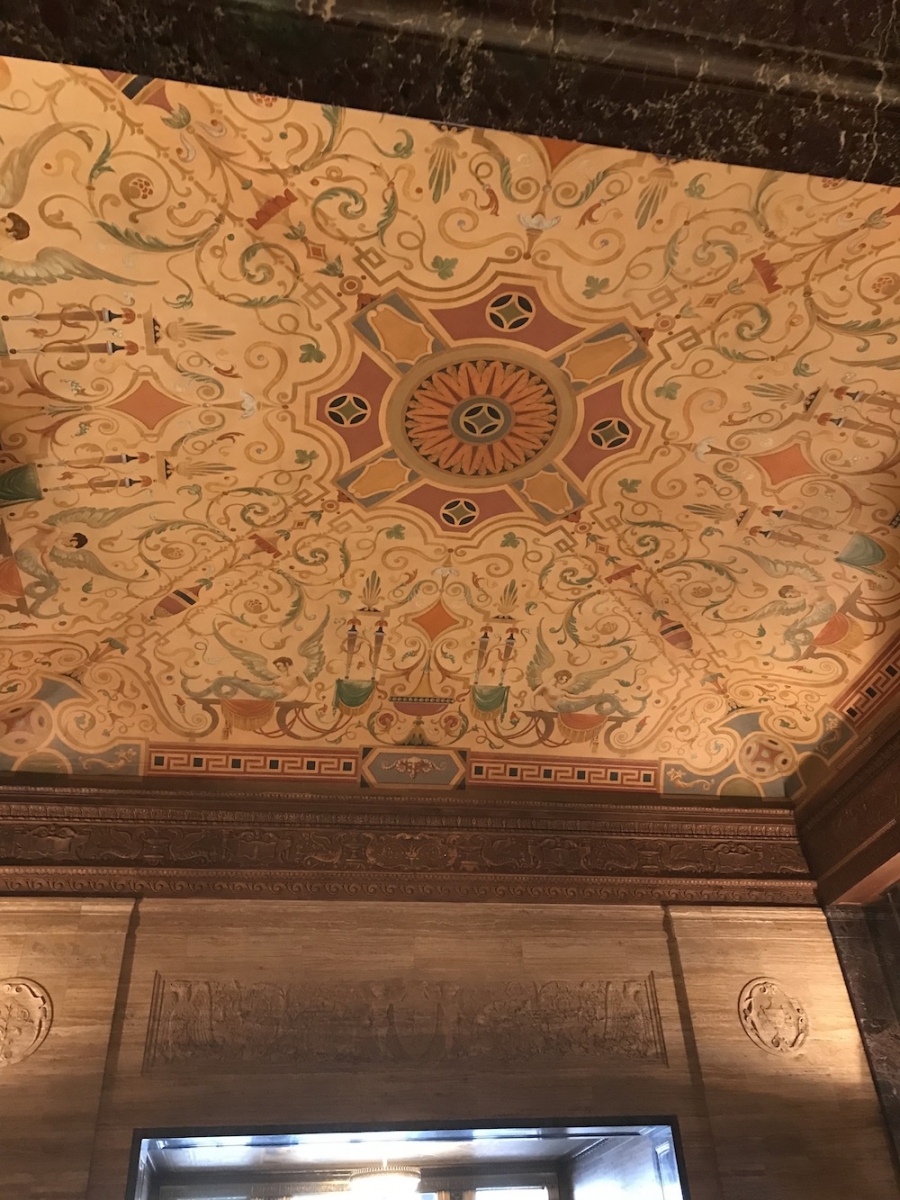 At this point, someone asked our tour guide (who was wonderful and very knowledgeable) for the story behind this ceiling (pictured above). He responded that the main story is that there isn’t a story–because thankfully this ceiling was never painted over or otherwise destroyed, as is all-too common. At the bottom of this building was the entrance to the first tunnel, which we only looked at. This tunnel was built so that tracks could be laid for a train to carry a 55-ton (if I remember correctly) vault to the bottom of the building! The vault itself was stunning, but there was a very clear “No Pictures Allowed” sign in front of it, so alas–you’ll just have to take a tour if you want to see it 😉 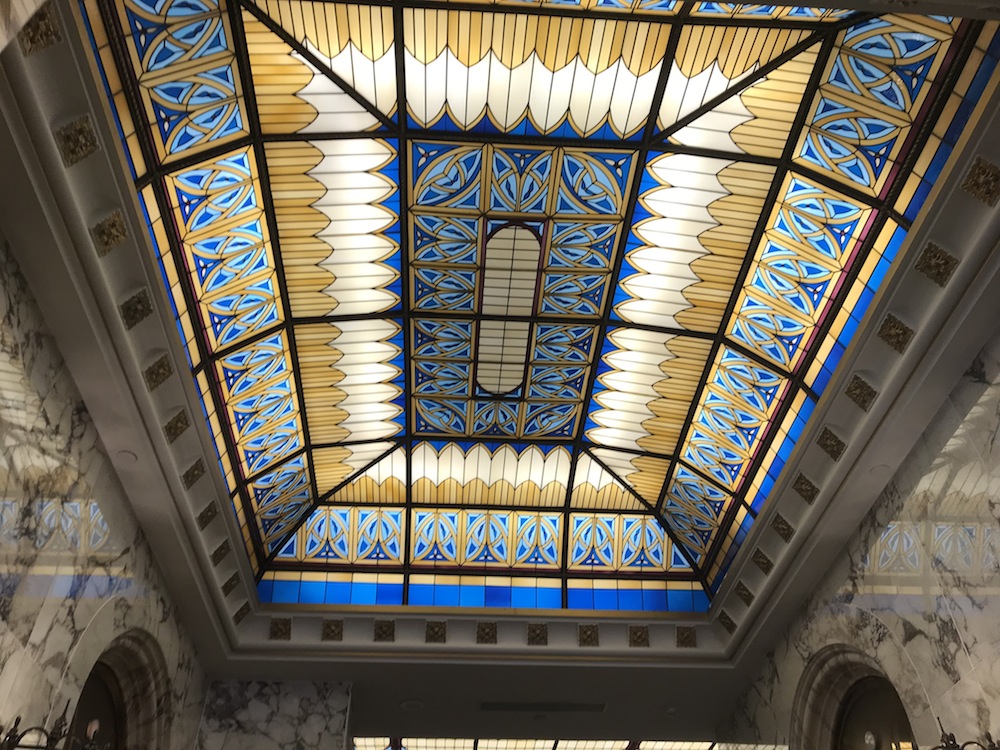 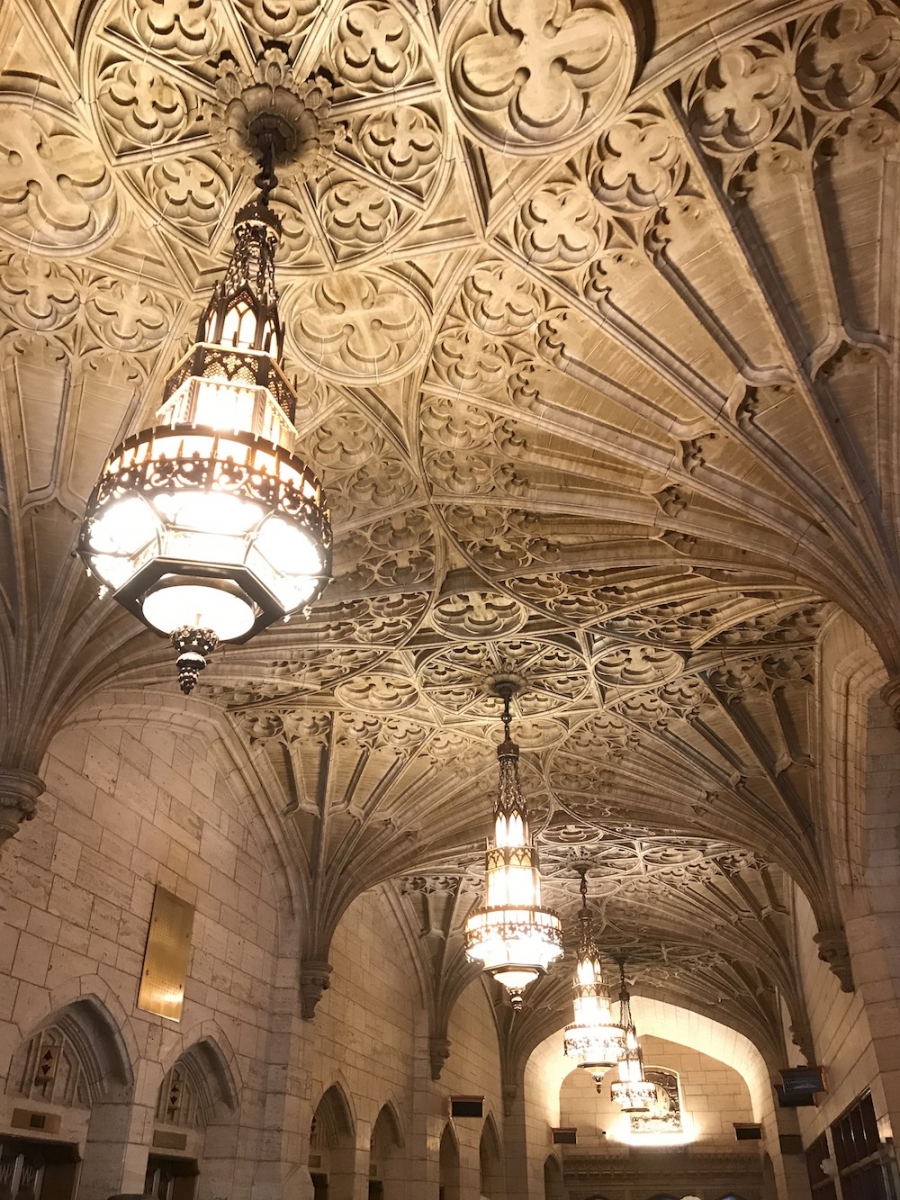 Above is a ceiling in the Philtower building. The tunnel that connects the Philtower and Philcade buildings was built by Mr. Philip in order to minimize the chance of him getting kidnapped while walking between buildings, which was apparently a real danger at that time because there weren’t any specific kidnapping laws! This tunnel was suitably spooky, pretty narrow with low lighting and walls with peeling paint–everything you’d want from a tunnel-tour experience! 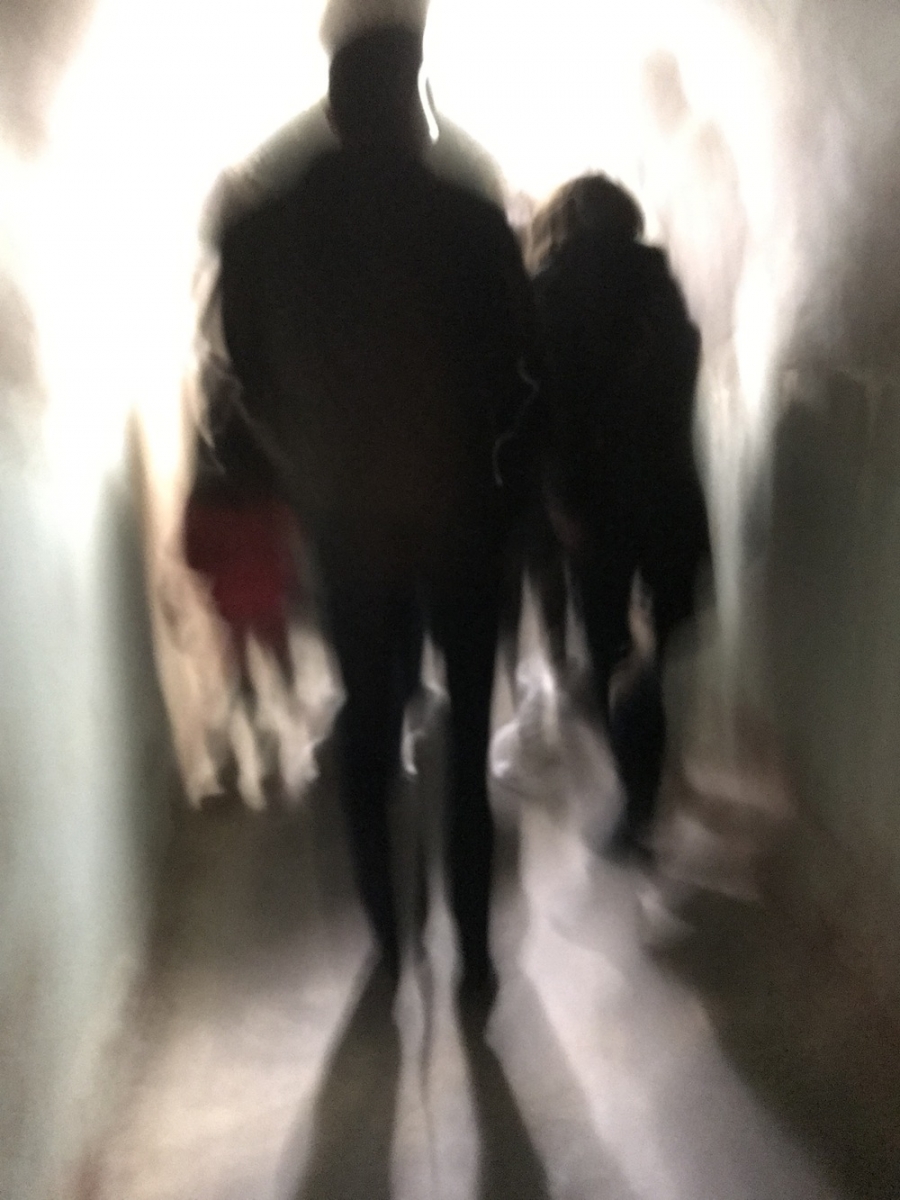 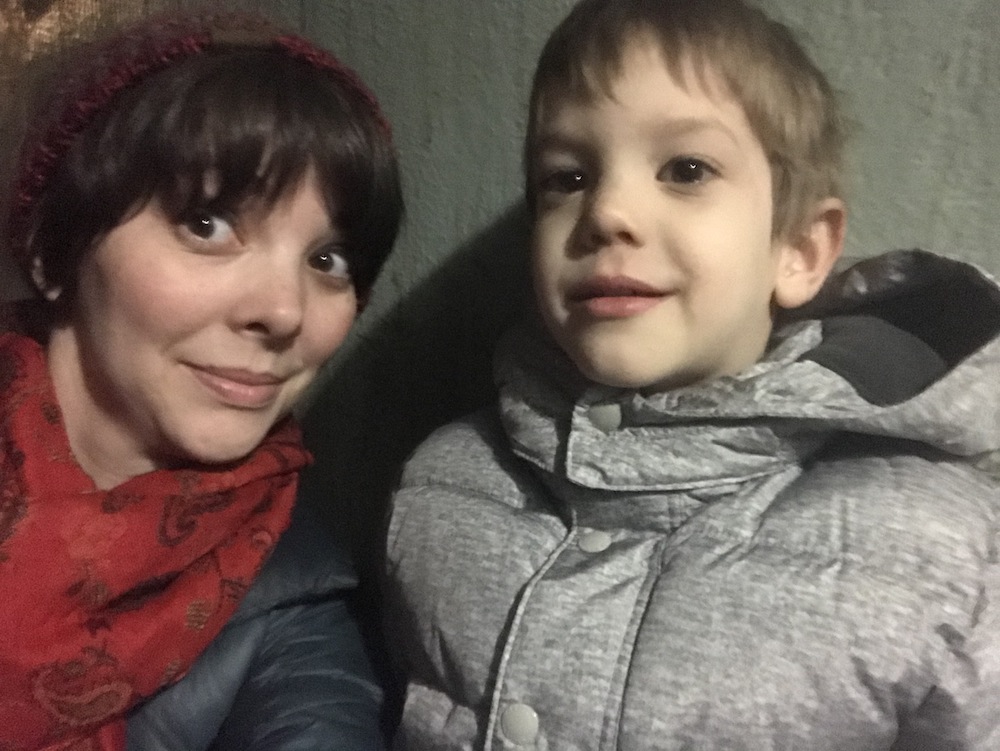 Also hard to photograph inside this tunnel!

And there we were, having come full circle back to the Philcade. As mentioned before, Joss got a cookie for (semi-)good behavior. Afterwards, we went across the street to Decopolis, and I grabbed myself some vegan ramen and Boba to-go at Roppongi on the way back to the car. Delicious! 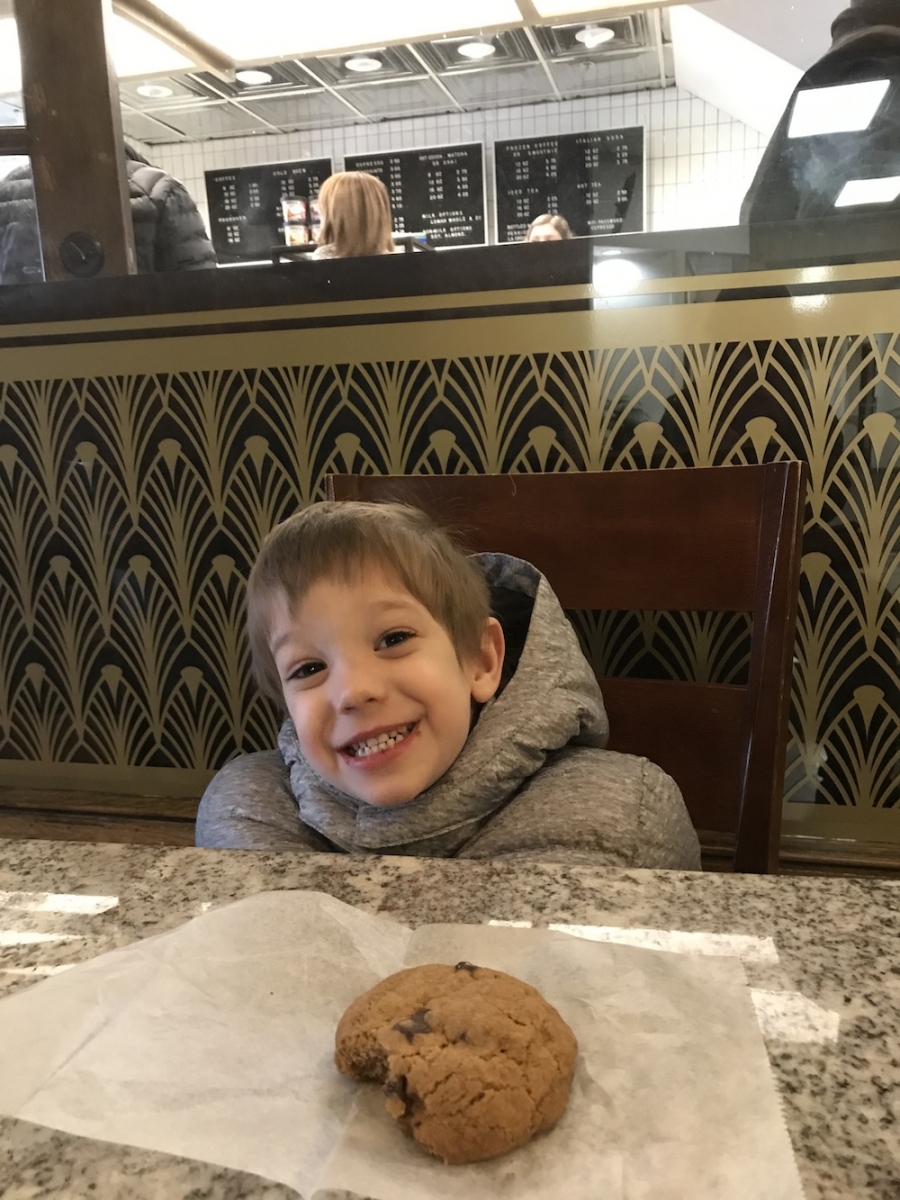 Have you taken one of TFA’s 2nd Saturday Tours? Which one? What are some interesting things you learned about Tulsa on the tour? 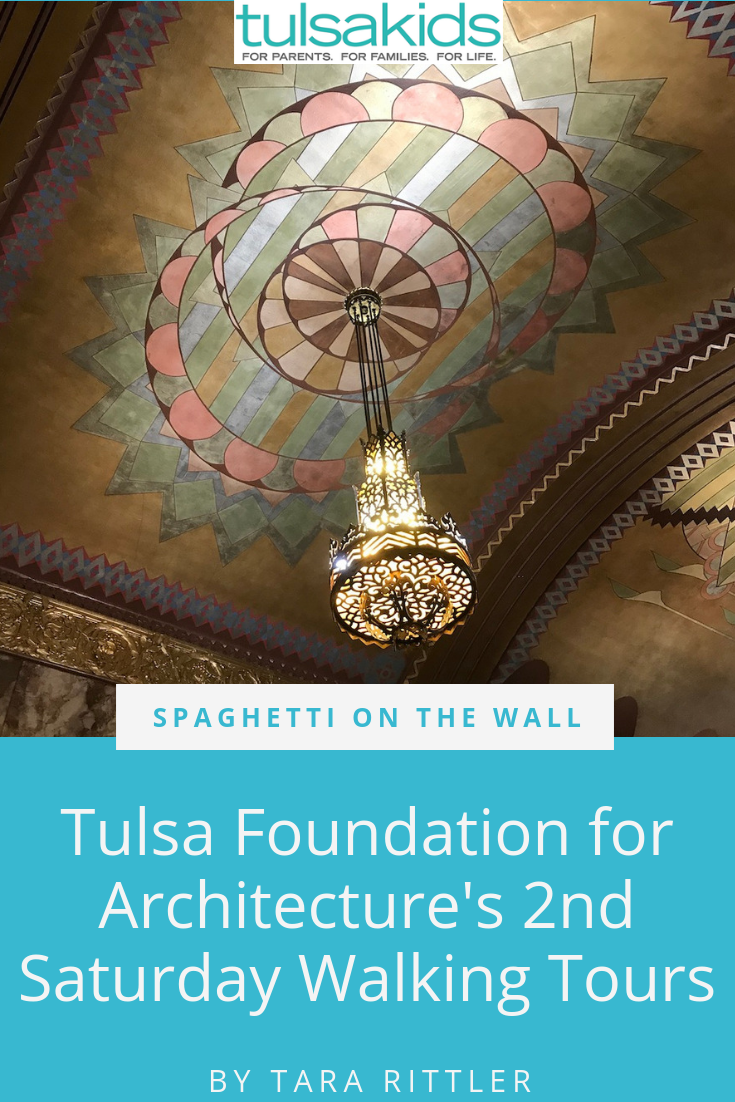