Earlier this year, I set as one of my goals for this year for us to attend our first fandom culture convention, and now we’ve been to three! We started off with Tokyo in Tulsa a couple of months back, where we were blown away by all the clever cosplays and vendors.

Then we had the extreme pleasure of attending Wizard World Comic Con, where I got to meet Nichelle Nichols and hold her hand and literally sobbed because I have loved her since I was about Lucy’s age. I was so stunned from meeting the magnificent and beautiful Uhura that I nearly bumped headfirst into Ron Perlman, my beloved Beast–I don’t care who you are, that was a great show and you should watch it right now on Prime–and I was in such a daze I simply stood there, mouth agape, as he walked past me, the kids, and nobody else down a breezeway at the convention! Did I say anything? Nope. I just stood there staring like the weirdo I am.

As you can imagine, I was still riding that high when I showed up for the much-hyped Tulsa Pop Culture Expo. I had been hearing so much buzz about this convention all year that real talk, expectations were high as heck as me and the kiddos Ubered up to the Renaissance Convention Center. So did this con live up to all the hype? Heck yes! Even Justin, the family’s resident “cool guy” (signature moves include looking at me with feigned weariness hiding real amusement when I’m going on about the sociopolitical themes of Battlestar Galactica) was into it. 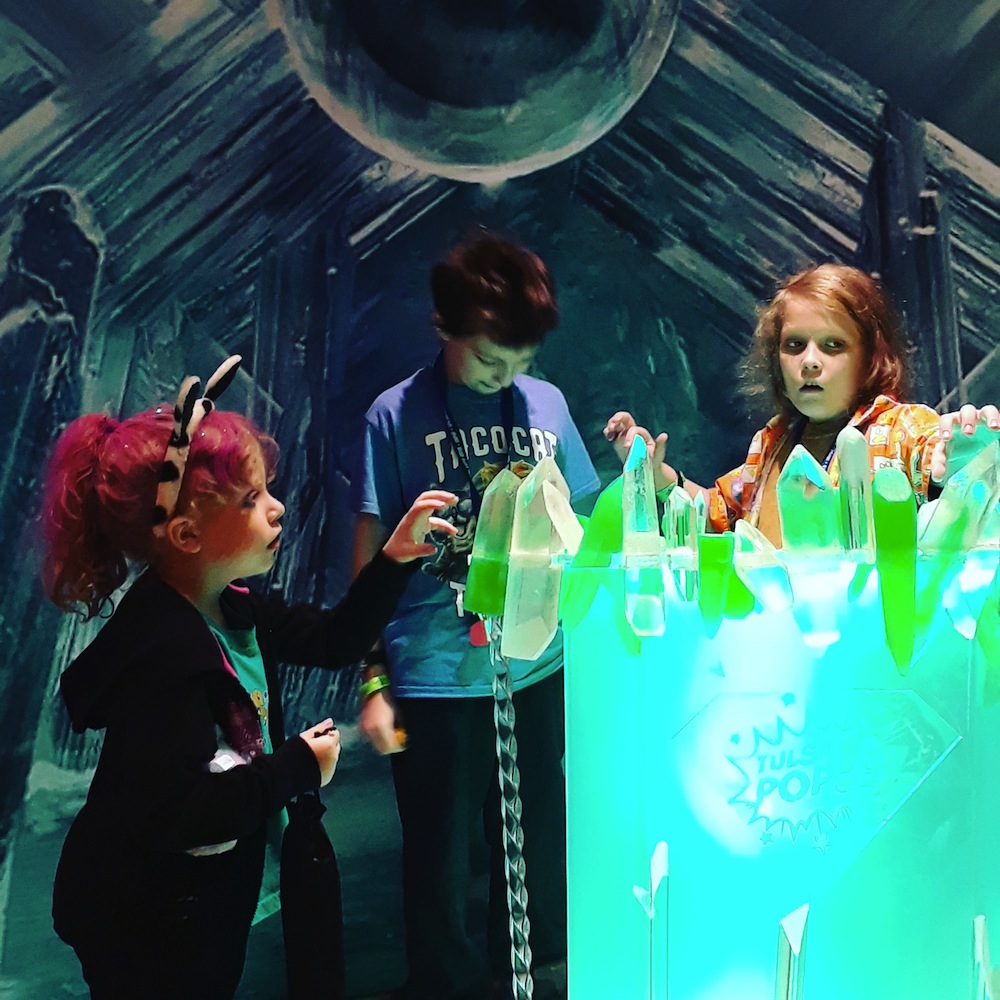 Each convention we attended had its own signature dopeness, but when it comes to attending a Tulsa convention with kids, this one should be at the top of your list. This con was so legit that I don’t even know where to begin, so I’ve put together a list of my top six Tulsa Pop Culture Expo moments to share.

You know your geekery has come full circle when your kids have started introducing you to fandoms. This was the case earlier this year when Arthur stumbled onto Steven Universe and got the whole fam hopped up on the Crystal Gems. This show is about everything our family values–mainly, putting love and compassion for other people above all else. Plus it has super complex sci/fantasy worldbuilding, which our family totally gets down with. It also presents incredibly positive representations of people who don’t fit the prescribed gender/orientation norms in a respectful, normalizing way. Put simply, people love and need each other, and who they are, what they look like, how they express themselves, none of that matters nearly as much as the love and goodness they put into the world. 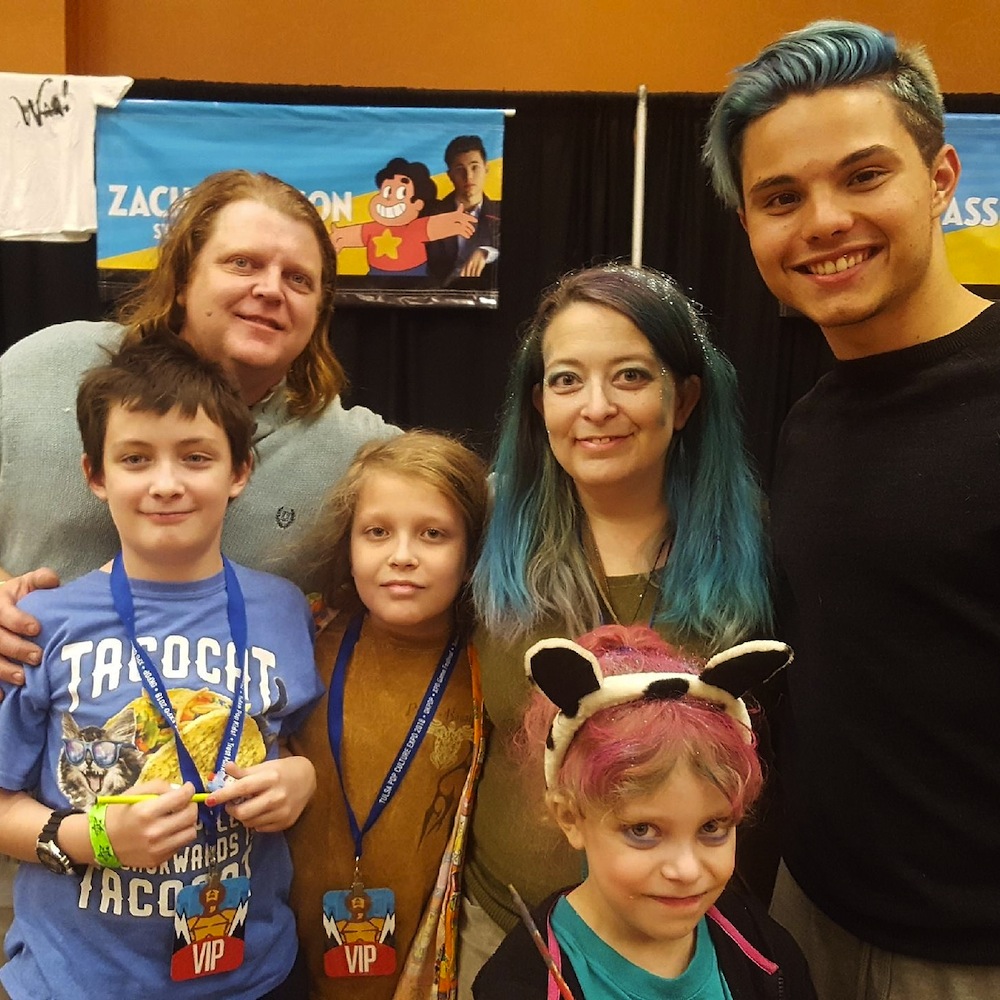 That’s why when we got a chance to meet Zach Callison, who voices Steven, we took the chance to introduce the kids to this character they have all admired and adored. Lucy was completely starstruck, which was totally adorable. Zach was nicer than I could have ever expected, charming the heck out of the kids by dropping into character and then quizzing them on the Crystal Gems. He even gave us advice on some of the cooler places to hang out in Tulsa before offering to take a pic with us. To see someone go above and beyond to make a great impression on our kiddos hit me right in the feels. Also, he has a super cute puppy.

We made the coolest new friend when we met local YouTuber NJ from NJ’s Toybox, and she invited the kids to participate in an unboxing (check her channel for updates). This kid is great. She started her channel a few years back as part of a Girl Scout project, and now she does it all the time! Serious props on how patient and sweet she was with the Three Musketeers. To do: Find out if NJ babysits. 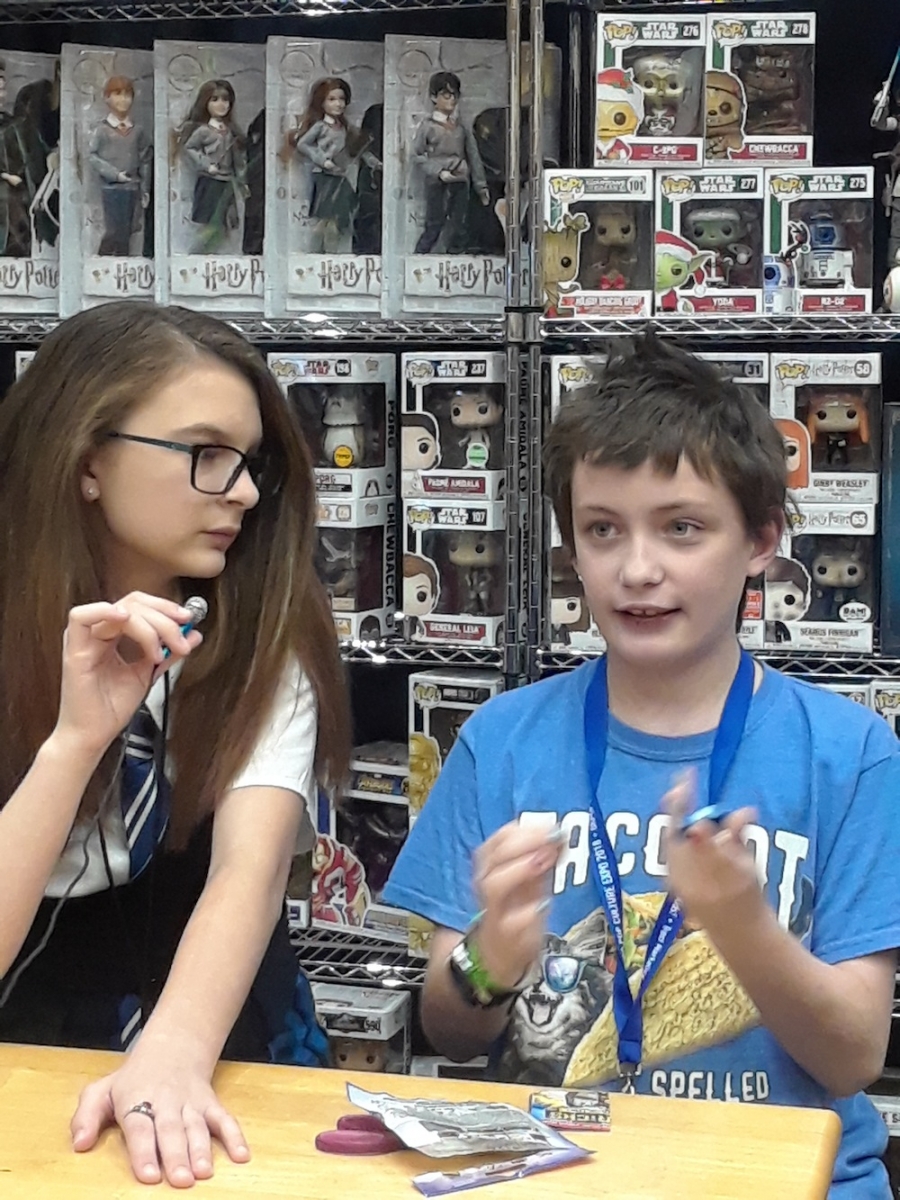 Lucy and I may or may not have gotten a serious lecture about our glitter abuse after Halloween that should have caused us to think twice before gravitating toward the Clary Sage-sponsored smorgasbord of various glitters and paints, but what can I say, we have a weakness for the sparkles. While the guys played video games in the kids’ area–there were so many amazing video and arcade games, y’all–Lucy and I got killer princess makeovers. There’s just something about having colorful hair and a metric ton of glitter in your scalp to make everything a little brighter. 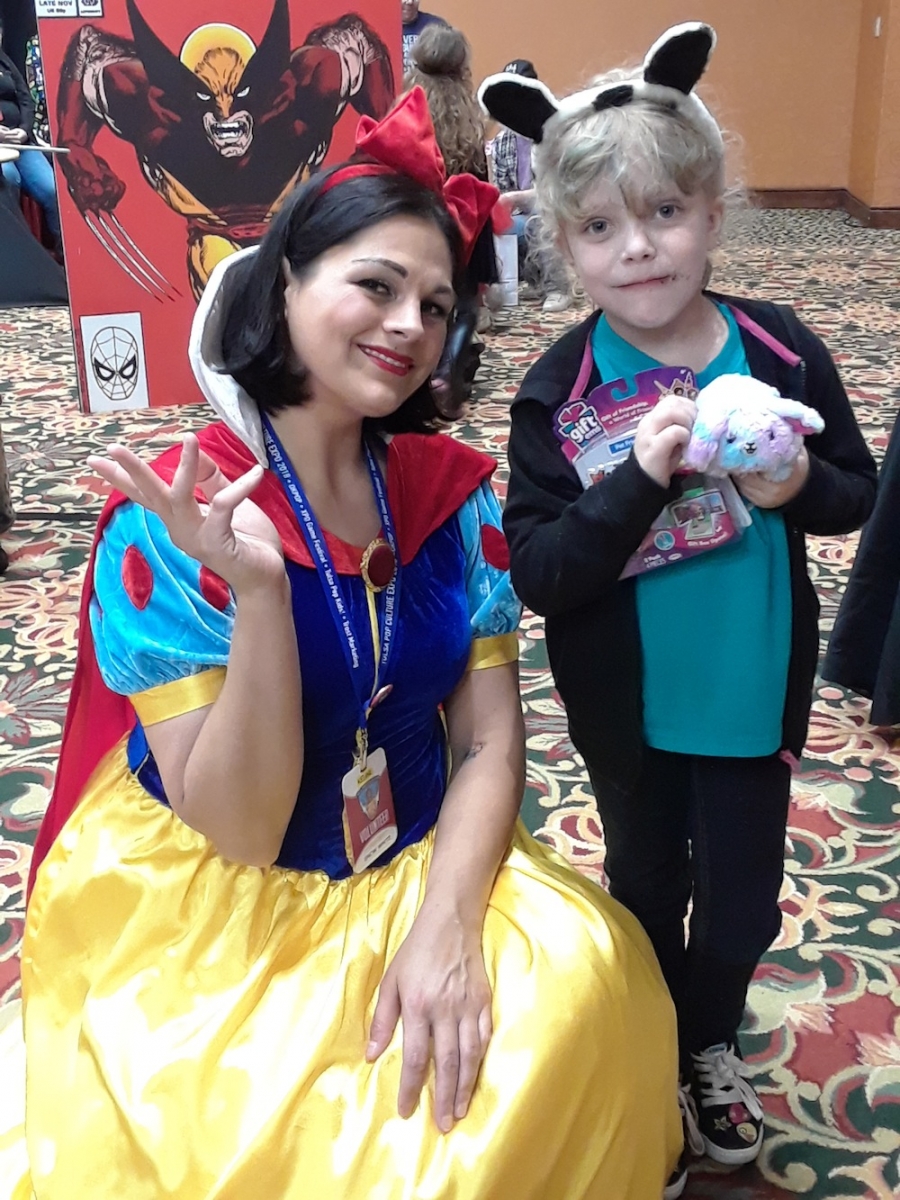 One of the coolest things about this convention is the chance to try out games that are either recently developed or currently under development. Arthur and Lucy were wacky over the developer team behind MonCon and The Idiot’s Tale. These bright, pop art-inspired games are hard to resist and have all the quirky, surreal elements my kids love. The game’s developers are a family team, with two brothers handling the programming and animation while their dad creates the music. Anton, one of the brothers, gave Arthur some sound advice on some good software to start with and advising him to start learning right away. 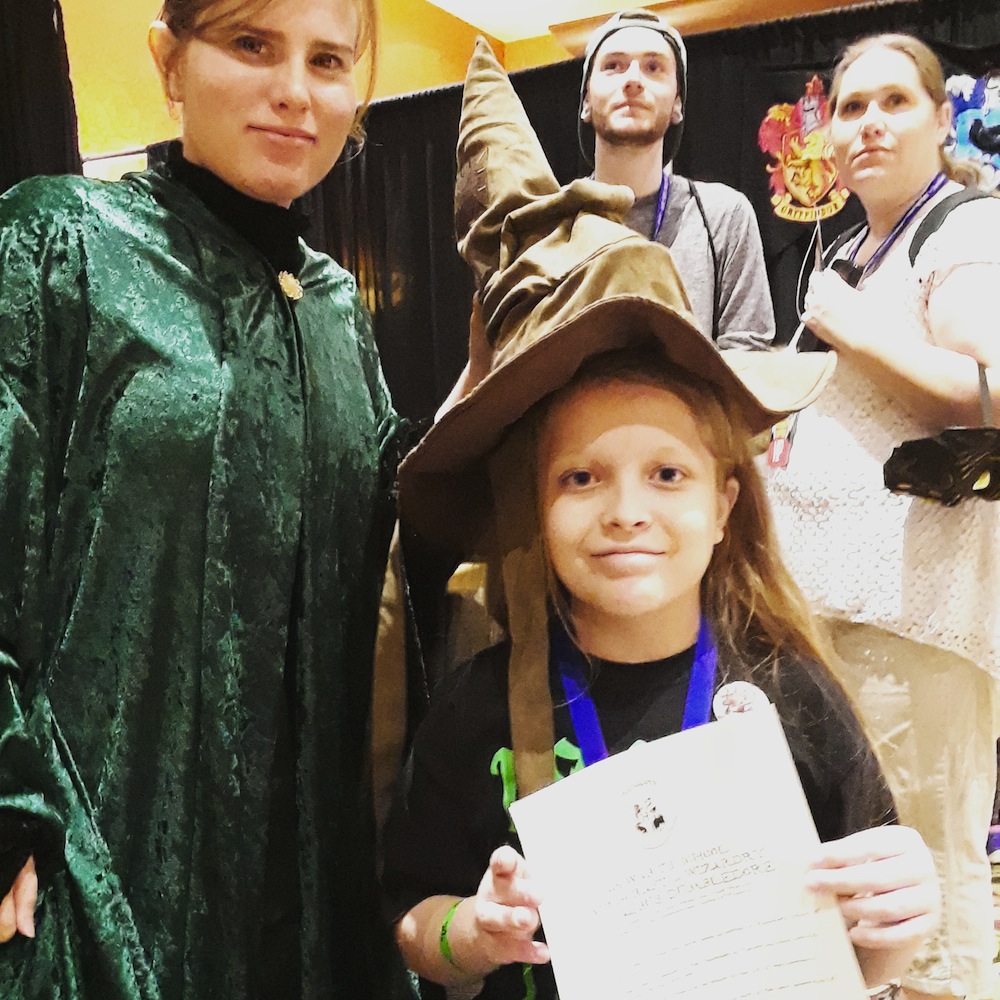 To reiterate, the kids’ area was killer. It was brimming with games and activities and full of cosplayers milling about. One corner of the kids’ area in particular was infested with wizards who helped us get sorted and gave us official documents of acceptance into Hogwarts. After that, the kids got to color their crests and learn some magic tricks. But the best part was when the kids got to paint their own wands. When the dried, the wizards were nice enough to give us cute little drawstring bags to keep them in. With Arthur on book six and Lucy on book two, they were pretty excited.

Noah is a great sport when it comes to all the geek stuff. He’ll get into anything the rest of the family is down with even if it isn’t really his bag. But Noah’s one true passion is vehicles. We’d seen some great cars at Tokyo in Tulsa and Wizard World, but there were just so many at this convention that he was constantly gasping and commenting on everything from the banana car, the General Lee, or the Munstermobiles. 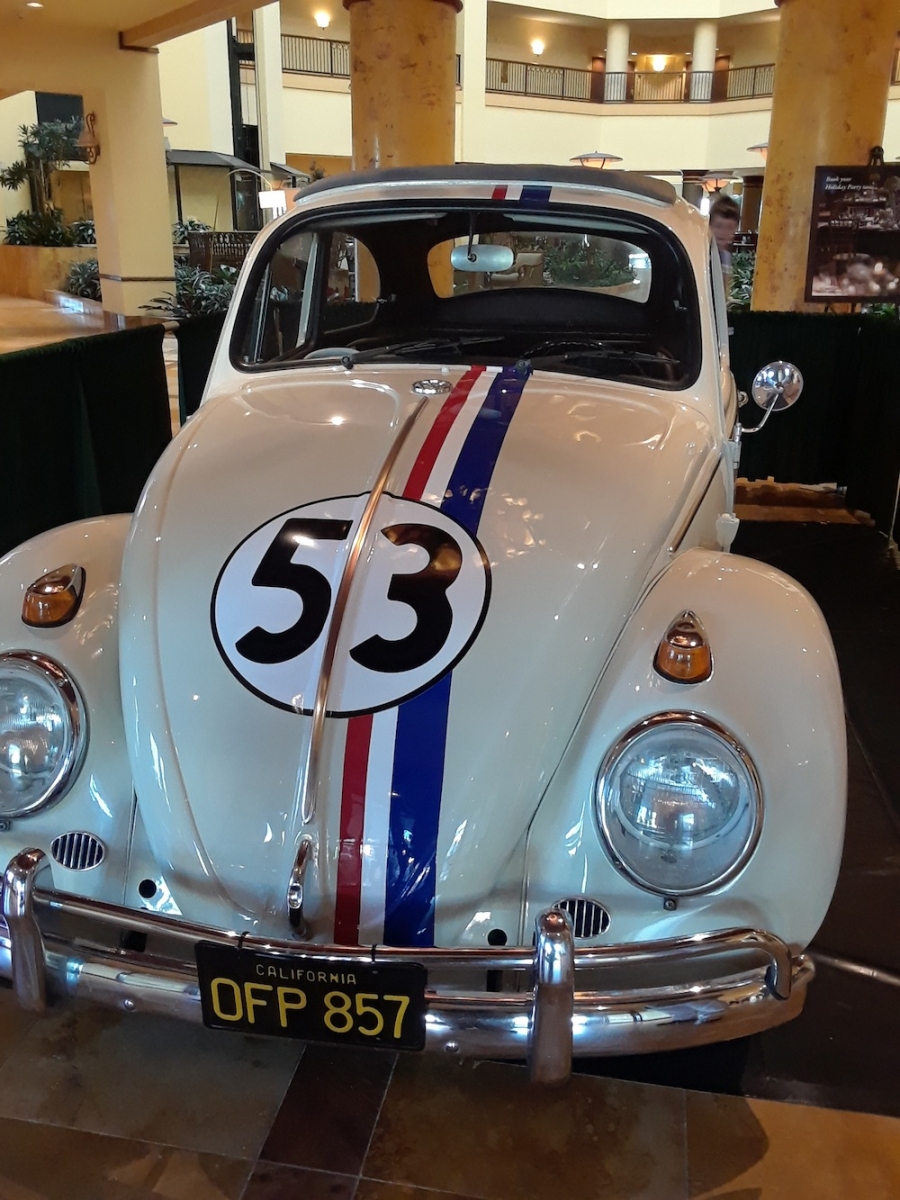 All the conventions we attended this year were fantastic. Tokyo in Tulsa is hands-down the best for fans of manga and anime, while Wizard World is a great good-old-fashioned sci-fi and fandom convention. Tulsa Pop Culture Expo has a lot to offer to a broad group of pop culture fans and was definitely my favorite if you’re hanging with younger kids. We made loads of cool friends and just had a blast. As Sunday came to a close, we didn’t want it to end. If you plan on taking kids next year, check out the kids’ event schedule because there’s something going on pretty much all weekend. 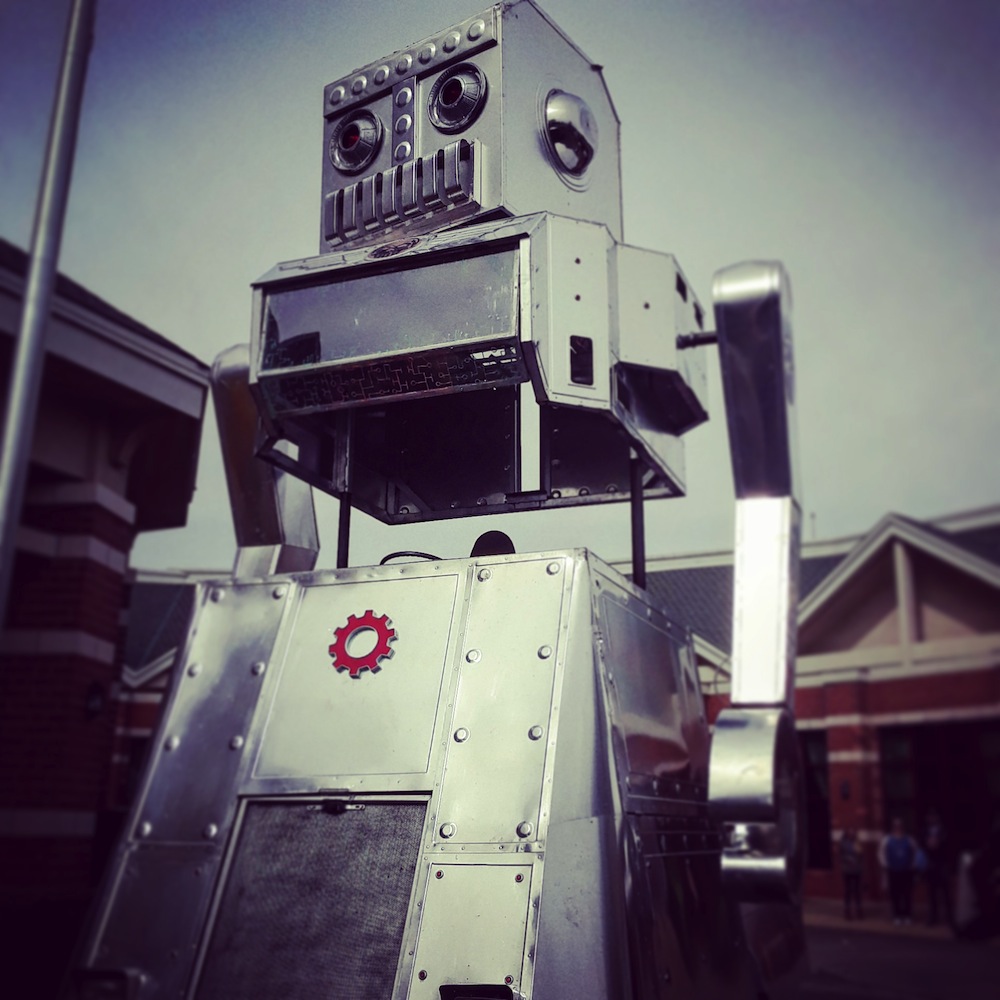 Now that we’ve had a taste of the con culture, we can’t wait for the next event! Until then, I’ll be planning my mirror-universe Sylvia Tilly cosplay.

What’s your favorite local convention? Tell me all about it in the comments, and thanks for reading! 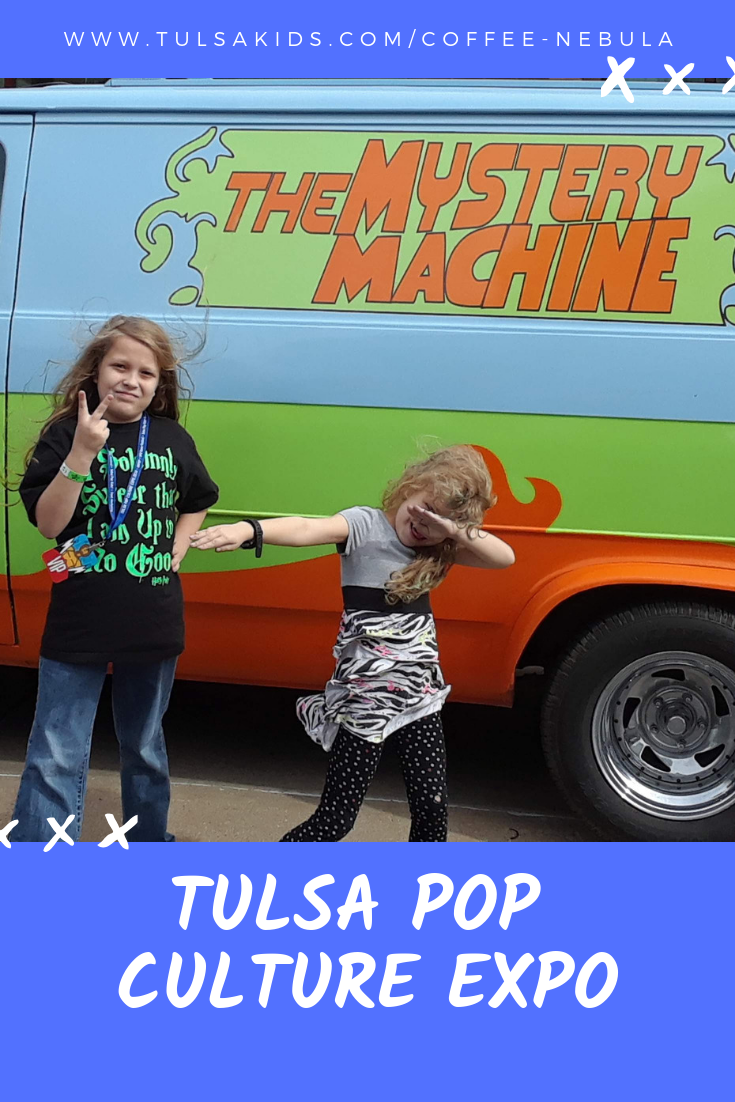