Turtle Evangelista is a little fellow with a shock of dark hair and big brown eyes. But don’t let his nickname and size fool you. Turtle’s full name is Tai Honu, a Hawaiian name meaning, “strong turtle.” And for all he has been through in his two years, he is indeed a very strong little Turtle! 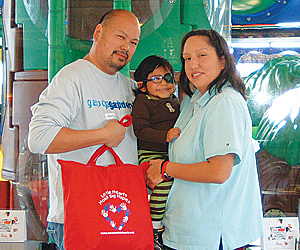 Turtle’s father, Terry, a native of Hawaii, and his mother Wayverly were unprepared for how their life would change when Turtle was born. At five weeks premature and with unusually rapid breathing, Turtle was given an echocardiogram when he was three days old. The test results were shocking.

“The two main arteries were both on the right side of his heart instead of one being on the right and one on the left,” Wayverly said. “He had pulmonary stenosis, a narrowing of the pulmonary artery, and ventricular septal defect—holes in the wall of his heart.

“He had to stay in Neonatal Intensive Care Unit (NICU) at Hillcrest Hospital for six weeks before he could come home,” Wayverly continued. “And when he did come home he had to be on several medications round the clock. Too much of his medication would stop his heart, so we had to be extremely careful we didn’t double dose him.”

For a sick baby Turtle was eerily quiet. His poorly functioning heart left him weak. “From the time he was born until his heart surgery at 10 months, he didn’t do much,” Wayverly said. “He was like a little turtle on its back.”

Though Turtle was taking a bottle when he left the hospital, once he was home he slowly stopped eating. “The action of sucking tired him out,” Wayverly explained. A feeding tube was inserted in his abdomen to keep him nourished.

By 10 months Turtle’s heart was failing. “His lips and skin were blue,” Wayverly said.

It was time for Turtle’s open heart surgery.

“After his surgery he looked pink, like a normal, healthy baby,” Wayverly said. “And three days later he was sitting up with help, something he wasn’t close to doing before surgery.” Unfortunately, complications arose. “Fluid started collecting on the back side of the heart and an infection set in,” Wayverly said.

What was to be a relatively short hospital stay grew longer. While Wayverly kept constant vigil at Turtle’s bedside, Terry managed working and caring for their older son Tristan. By day seven or eight Turtle was well enough to move around a little.

“I was actually able to hold and cuddle him,” Wayverly said.

On day 10 a restless Turtle was finally released to go home.

Following surgery Turtle began to blossom. However, with several months lost to weakness and illness, he was significantly behind developmentally. Additionally, even when the feeding tube was removed, he wasn’t interested in food. After being fed with a feeding tube for so many months, Turtle did not associate his mouth with nourishment.

“We had to go to a physical therapist to teach him how to eat,” Wayverly said.

With therapy and Wayverly’s untiring efforts to desensitize his face and mouth, he finally began to enjoy food.

Today, Turtle is an active 2-year-old with a healthy appetite who loves playing with his 4-year-old brother and his dad. Though his heart is enlarged and he has a significant murmur, his cardiologist says his heart is currently stable. Helping him catch up developmentally with physical therapy, occupational therapy and speech therapy, is the family’s current order of business. Two surgeries for ear tubes and a weakness in his right eye requiring glasses and an eye patch have been additional setbacks.

Wayverly admits that having a “heart” baby has been tough on the family. In the early months she and Terry had to work different shifts because they couldn’t send Turtle to daycare. The couple missed time together as a family. Finally, when Turtle was 18 months old, Wayverly quit her job to take care of him full time.

“Even though it has been a struggle financially, it has been worth it,” she said. She supplements the family’s income by selling hand-sewn blankets and baby items through her Facebook page, “Turtle and Turtle Designs.” She says that sewing is a good outlet for her. “It calms me down.”

If there is one thing Wayverly hopes parents will take away from her story it is that each newborn should be given a pulse oximetry test to screen for congenital heart problems before leaving the hospital. A federal advisory panel is recommending the same thing. With 40,000 babies born each year with congenital heart defects, early identification can mean the difference between life and death. Alex Kemper, M.D., associate professor of pediatrics at Duke University School of Medicine and member of the advisory panel, supports the recommendation. “These babies can go home from the nursery and very rapidly die,” he said. The inexpensive, non-invasive test is easy to administer and could prevent heartbreaking deaths.

Turtle was fortunate. His heart problems were detected before he left the hospital and today his prognosis is good.

“He can lead as normal a life as a heart patient can,” Wayverly said. “He may have to have another surgery when he is 5 or 6. After that we will just have to wait and see how his heart does as he grows.”

Mended Little Hearts is a nationwide organization for parents, caregivers and families of children with heart defects or heart disease. They provide support, resources and hope for families going through the overwhelming experience of having a child with a heart problem. The coordinator for the Tulsa Chapter of Mended Little Hearts, Susan Vanderpool, is also the current national vice president of the organization.

Mended Little Hearts provides support to families through the Bravery Bag program. When members of the organization find out about a family with a child hospitalized with a heart defect, they provide a bravery bag bag. Each bag is filled with items families might need during the hospital stay such as a baby blanket, layette items, travel-sized toiletries, playing cards, heart pillow (for the child to hold after surgery), magazines, snacks, crossword puzzles, coloring books, crayons, a roll of quarters for doing laundry or visiting a vending machine, a notebook for writing down questions for the medical staff and more.

Wayverly Evangelista, the national Care Bag coordinator, is passionate about her role. “I know what it is like to be without support,” she said. “I don’t want any other family to go through what I went through.” Wayverly’s job is to collect items for the 3000 care bags the organization distributes per year. “When different chapters need new care bags I ship them out,” Wayverly said. “The average cost of each bag is $42. We are currently looking for a sponsor to help offset the cost.”

*When this article was originally published, Mended Little Hearts provided “Care Bags.” In 2014, they changed the initiative to “Bravery Bags.”