Trying to Scare Myself with Children’s Lit

I've largely avoided the horror genre for most of my life, including as a child. Here's my attempt to remedy that.

I don’t love horror movies. Every now and then I come across an article praising a horror film for its literary aspects or unique perspective on the human condition and think, “I should watch that!”

If I do, it’s between my fingers or through the TV’s reflection in the window, and with a fair share of regret.

But despite my squeamishness, I recognize that horror often does have literary and philosophical value. According to this 2008 article in The Guardian,

“Horror movies have always been a way of addressing our most unspeakable fears and desires. Sometimes these are smuggled past our defences disguised as zombies or werewolves – not to slip one over on the censors (though there was that, too, back in the day) but because it’s a way for us to absorb notions about death, decay and the human condition, which in their unadulterated forms would be just too vast, distressing or disgusting to contemplate.” (Anne Billson)

And this more recent excerpt from a WNYC segment:

“There’s something therapeutic, almost Freudian about horror movies. They’re a subconscious bait and switch; they scare us with one monster, when we’re really afraid of something else.” (Rafer Guzman)

For these reasons, I find horror interesting, even if it hasn’t won me over. Moreover, it’s probably my husband’s favorite genre, and I think he’d be a little disappointed if Joss didn’t grow up enjoying it as well. He says that watching a terrifying work of fiction–because you know it is fake–can be comforting.

I was talking with our editor, Betty Casey, about horror and child development the other day. She mentioned that kids don’t learn to distinguish between reality and fantasy for several years, so a very young child watching something scary on TV won’t be able to reassure themselves that it’s just a show. I remember being terrified of the dinosaur scene in “Fantasia” for many years–I was at least half-convinced the T-Rex had the ability to come out of the TV and eat me!

But slightly older children may really enjoy horror. In this interview with Darren Shan, author of the Cirque du Freak series, Shan talks about how his love of horror began when he was 5-6 years old, and he’d lay in bed trying to scare himself. Shan thinks that kids love reading and watching horror because it offers “safe scares.” Author Dan Wells (most well-known for his John Cleaver series) agrees: “I think that’s one of the reasons that horror has always been so popular with children: because it’s ‘safe scares.’ It’s an opportunity, in a safe environment, to deal with the kinds of emotions and the kinds of catharsis and the kinds of danger…that they might very well come across in real life.”

All this to say, I decided to read some scary children’s literature, having missed out on this growing up. I was looking for my own “safe scares,” hoping to be mildly creeped out, but also just curious about the world of children’s horror. Here are my thoughts: 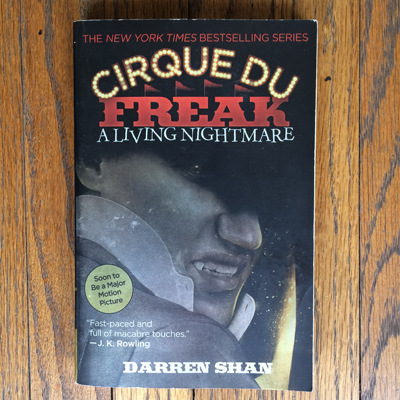 The Cirque Du Freak has come to town, and Darren Shan (the narrator, not the author–don’t be confused!) and his friends can’t wait to go, despite the fact that 1) kids aren’t allowed 2) their favorite teacher gives them a stern lecture on the wickedness of freak shows and 3) they only have enough money for two tickets. But Darren is the lucky winner of the rights to the second ticket, so he and his best friend soon find themselves at the Cirque Du Freak. Events ensue!

Shan’s descriptions of the Cirque Du Freak and its performers are detailed and interesting. The performers at Cirque Du Freak include Hans Hands, Gertha Teeth, Rhamus Twobellies, and Mr. Crepsley, described as “tall and thin, with very white skin and only a small crop of orange hair on the top of his head. He had a large scar running down his left cheek. It reached to his lips and made it look like his mouth was stretching up the side of his face…” *SPOILERS* Mr. Crepsley may just happen to be an actual vampire!

Is it scary? To an adult, no. Darren Shan’s narration kept it from being too frightening. He is a middle school boy, and although he talks about how “Real life’s nasty. It’s cruel. It doesn’t care about heroes and happy endings and the way things should be. In real life, bad things happen. People die. Fights are lost. Evil often wins,” throughout the book he always seems to maintain a young boy’s sense of optimism and excitement. It’s hard to abandon the feeling that, no matter how bad things get for him, he will probably be okay. Even at the end of the book, when he is forced to *SPOILERS* leave his comfortable home and loving family, convincing them he is dead, I never felt like this was an utter tragedy. He is about to start an exciting and utterly unknown new life, so who knows what could happen? Obviously, I’m not the book’s target audience, so it’s probably properly scary for younger people.

2. The Night Gardener by Jonathan Auxier 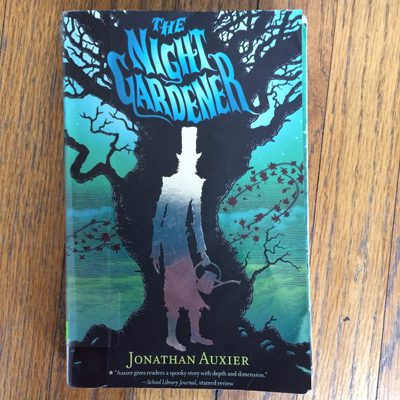 “​The Night Gardener” is, according to its back cover, “a chilling fable in the tradition of Washington Irving and Edgar Allen Poe.” The setting of “The Night Gardener” is quite different from that of “Cirque Du Freak.” It tells the story of two children orphaned during the Irish potato famine who find work with the Windsor family in England. From the start, you know the stakes are high because the children, Molly and Kip, have already lost everything except each other.

The children are warned against continuing on their journey to the Windsors’ home, but they go anyway, believing that they have no other option. It is clear from the moment they see the house that something is very wrong.

I think I chose this book because the Amazon description billed it as “a Victorian ghost story,” which sounded wonderful. And “The Night Gardener” really is scary! Not horror in the sense of blood and gore, but all the characters faced a very real and imminent threat of death. What makes it even creepier is that all the characters to some extent recognize the danger they’re in, but they are still convinced that the benefits of remaining in their situation outweigh the risks. The lesson learned here is that you shouldn’t live in a house that is slowly killing you, even if it has the potential to grant you your deepest desires.

3. Goosebumps: The Horror at Camp Jellyjam by R.L. Stine 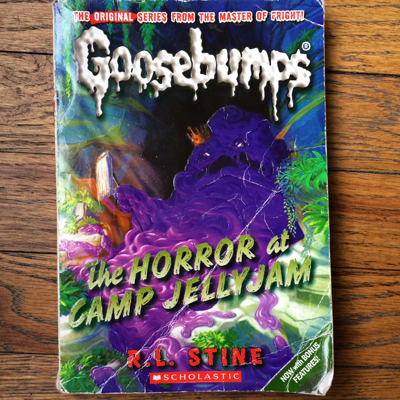 Obviously, I couldn’t read children’s horror without picking up one of the classic “Goosebumps” stories! I told my husband I’d never read them growing up because there’s no way my mom would have let me–but then had to admit that I never asked in the first place, being completely untempted to do so.

In “The Horror at Camp Jellyjam,” two siblings get separated from their parents on a family road trip when the trailer they’re riding in breaks away from the car. The lesson here is that you shouldn’t let your kids ride by themselves in an RV trailer while you’re on the highway.

The siblings are found by a counselor at the nearby Camp Jellyjam, a sports camp whose motto is “Only the Best.” At camp, kids compete to win “King Coins” and are reprimanded when they aren’t deemed competitive enough. When you win six King Coins, you get to walk in the Winner’s Circle. But, as the narrator, Wendy, quickly realizes, the kids from the Winner’s Circle keep disappearing! What is happening to them?

“The Horror at Camp Jellyjam” was amusing, but not scary. Again, I know I’m not the target audience so this isn’t really fair! My husband, more familiar with the “Goosebumps” series, says that it is probably one of the sillier ones. According to him, people who grew up on “Goosebumps” often have a couple books that really stand out to them as being especially terrifying. So I’ll just have to keep reading them until I find my spine-tingler.

Before ending this post, I should mention that Betty Casey also pointed out that one of the most important things is to know your own child. If your kids are more sensitive, don’t push them to read scary things (no matter how much you yourself may enjoy it and want them to share your interest!).

Did you grow up reading children’s horror? What were some of your favorite books? Which were the scariest? Are there any you regretted having read?