True Love Through the Aging

Watching my mom care for my dad through his dementia gave me a greater understanding of what true love is. 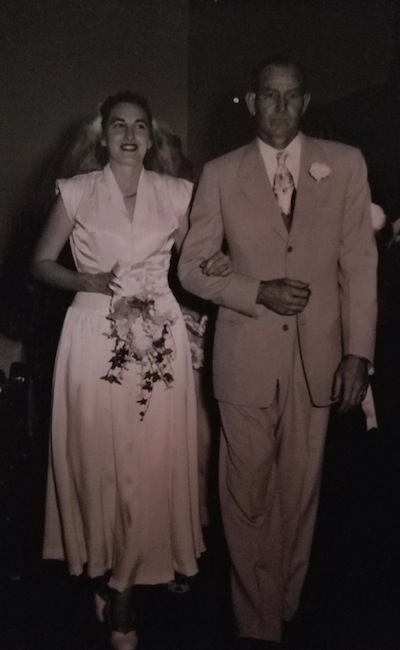 Mom and Dad at their wedding.

When I was young, I wanted flowers, candy, jewelry and dramatic proclamations of love on Valentine’s Day. As the binding cracks and the pages start to yellow (cue Dan Fogelberg) my idea of what’s desirable and important has evolved. If my husband is reading this, I still wouldn’t mind receiving those aforementioned tangible presents on Valentine’s Day as long as they’re accompanied by the real gift: abiding, enduring, true love.

Several mornings a week, as I run on the treadmill at the YMCA, my attention is drawn to an older couple.  I’ve never spoken to them, I don’t know their names or their back stories, but what I witness often brings me to tears. They appear to be in their early 70s; the man looks physically fit in contrast to his wife, who is frail and walks with the slow shuffle we associate with the infirm elderly. He tenderly guides her with his hand on her lower back, occasionally putting his arm protectively around her waist. He leads her to the seated bike and helps her get seated, placing each foot gently on the pedal. He starts the machine, bends down to speak quietly to her, kisses her on the cheek and then takes his place on the treadmill behind her, his eyes never leaving her.

By all appearances, she has dementia. She wears a look of confusion on her face, eyes unfocused, completely silent, yet it’s obvious she understands that he is “her person” and is to be trusted. I write their story in my mind, their shared sorrow when the first signs of dementia appear, her decline and his continued devotion and commitment. They aren’t young or beautiful and to most their story isn’t noteworthy, but it’s the enduring kind of love that transcends hardships, the faithful love that doesn’t garner publicity or praise but reaps deep, valuable rewards.

Perhaps I watch them more intensely than I should because I’m beginning to realize I’m not invincible and that that couple could be my husband and I one day in the not-so-distant future. Maybe I watch them with a sense of bittersweet longing because they remind me of my parents. When my father first began showing signs of memory issues, I worried that my mother, 15 years younger, would not be able to care for him. My father had been the more nurturing parent, sitting at our bedsides with cool cloths and 7 Up at the ready when we were sick, tucking us in at night and concocting enchanting bedtime stories for us.

We greatly underestimated my mother; she provided loving care for my father for five years. The last few years were intense as their relationship slipped from partners to caregiver and dependent.  I marveled at her patience and fortitude in the face of extreme physical and emotional demands.

The Notebook made us all cry as we watched James Garner visit Gena Rowlands every evening in the luxurious facility, having candlelight dinners and dancing as he attempted to rekindle her memories. His unwavering devotion to her made us all swoon; even the most stoic cried watching their epic love story. Not to deny his (fictional) love, but he wasn’t faced with the 24-hour nitty gritty care as are most caregivers, including my mother.

As my father’s dementia progressed, he was no longer able to perform basic personal hygiene, and my mother had to care for him in a way no one envisions as they stand at the altar in their wedding dress, pledging to love in sickness and in health. When my father peacefully died in the middle of the night, I rushed over to help her. As the funeral home took my father’s body, my mother followed through the house, onto the front porch and down the driveway to the hearse, crying and saying she wasn’t ready to let him go, she hadn’t had enough time with him. They had been married almost 60 years, but it wasn’t enough. She had taken care of him for five years, but it wasn’t enough.

It was at that moment, as we watched the hearse drive away with his body, I realized the depth of my parents’ love. It hadn’t always been peaceful or perfect, but it was true and it was real. How many of us ever experience such a grand love that we still want more after 60 years? 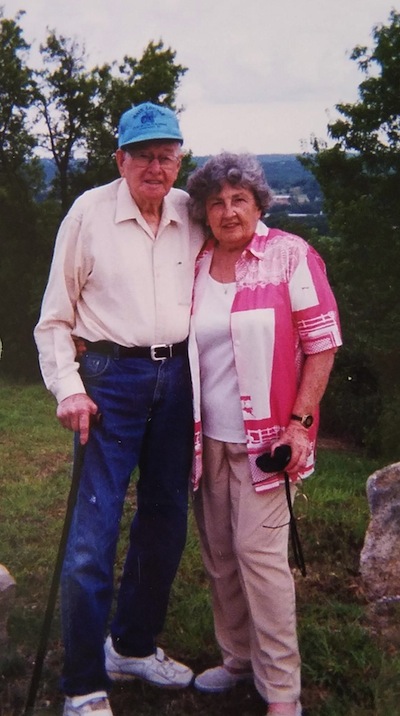 Mom and Dad at Chandler Park.

When I was young I had several passionate loves that I was certain would last forever. They burned hot and bright and like a pyromaniac, I was drawn to the flames. It probably took me longer than most people, but I eventually learned that type of fire is usually extinguished as quickly as it’s ignited.  Experience has given me the wisdom to understand love is more than a feeling, love is action.

True love doesn’t happen accidentally or through luck. It’s commitment to doing what’s right, not just for you but for your partner. It’s always having the other person’s back and wanting their happiness as much as your own. My husband tells me that I make the good times better and the bad times more bearable. I think that’s about the most romantic thing he could say, and I know someday if I need it, he’ll guide me gently to the bike, put my feet on the pedals and kiss me on the cheek. I can’t ask for a better love.