Our Halloween celebrations were rich and many this year. We visited two pumpkin patches, and the boys got to dress up and wear their costumes on three different occasions!

The first dress up occasion was for a performance and party at dance class, then we visited HallowZOOeen for the first time ever!

HallowZOOeen is a trick-or-treating event held at the Tulsa Zoo each year. Tickets for anyone over the age of 1 are $8.00 and it’s well worth the price!

Here are the littles, all dressed up and ready to peddle for candy (even if it was raining and chilly that night!). My five year old was the stealthiest ninja you’ve ever seen, and the little man was and intimidating and powerful clone trooper. I couldn’t help but to get a close-up shot of his little nose pressed up against his helmet and the nose steam! Bless his little heart! 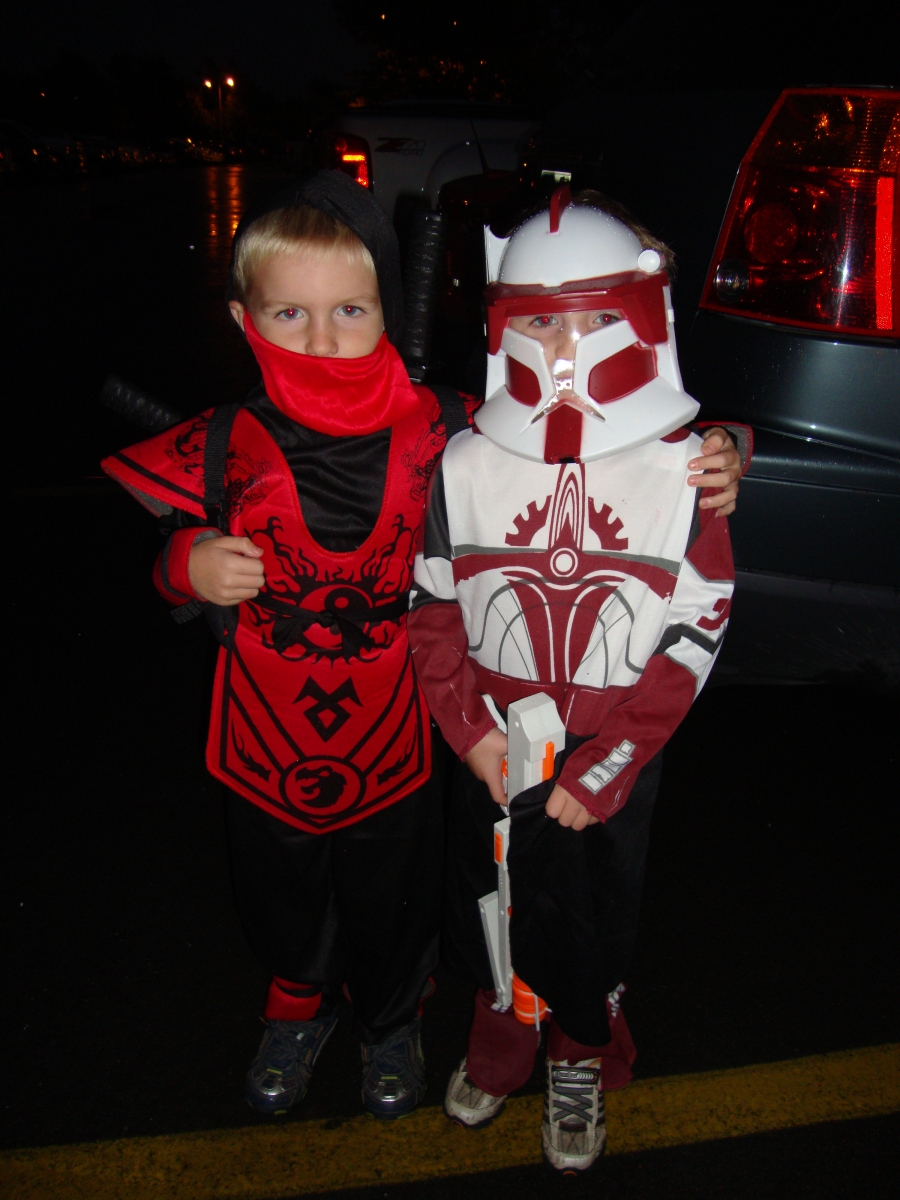 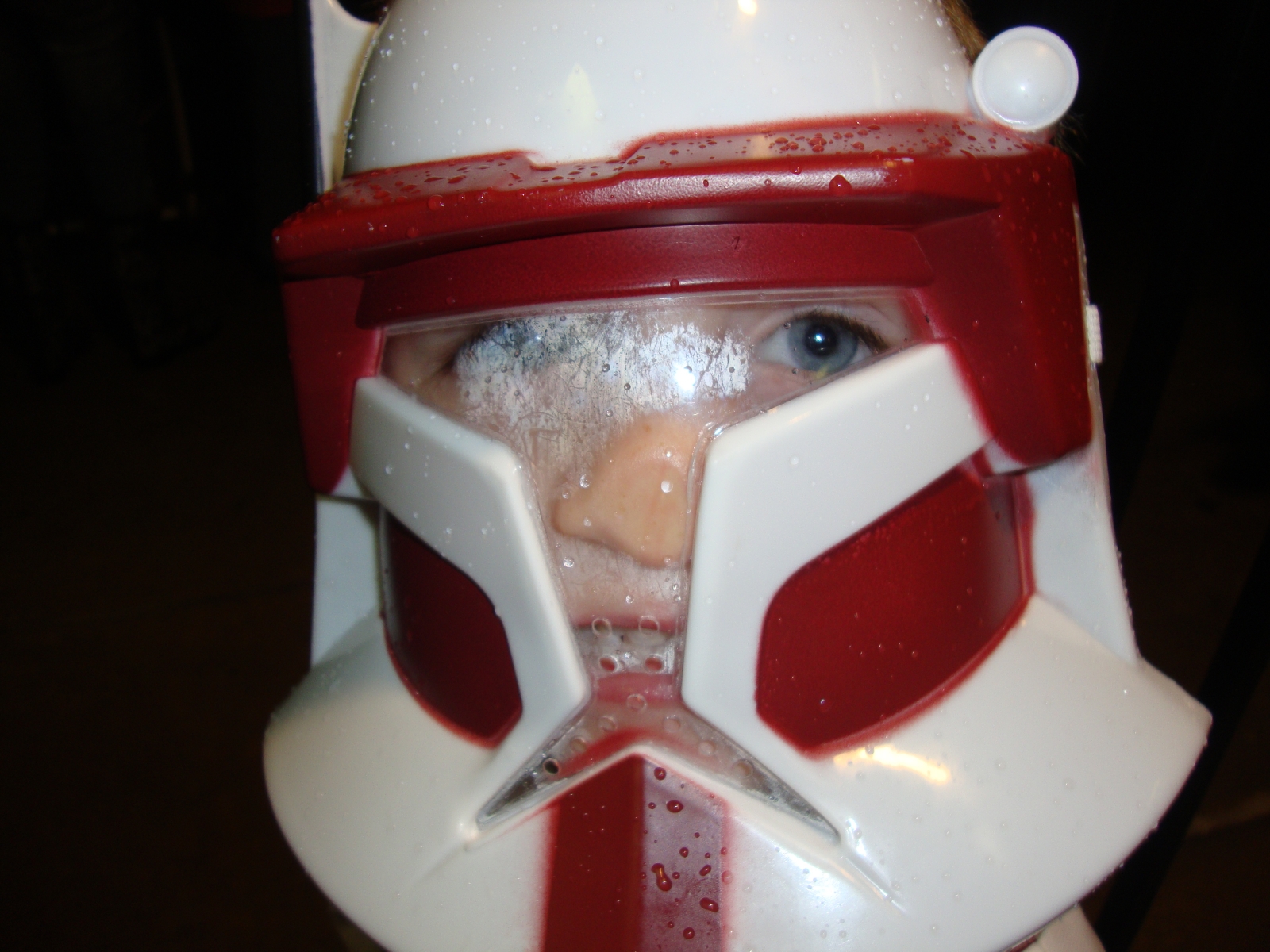 Immediately upon entering the park, walking through the ghostly grand entrance, we were greeted with all kinds of characters we could snap a pic with! It was almost as if we were at Disney World! Now that I think of it, I have no idea if these were Zoo sponsored people dressing up or just patrons like us! Maybe it was a mix of both. 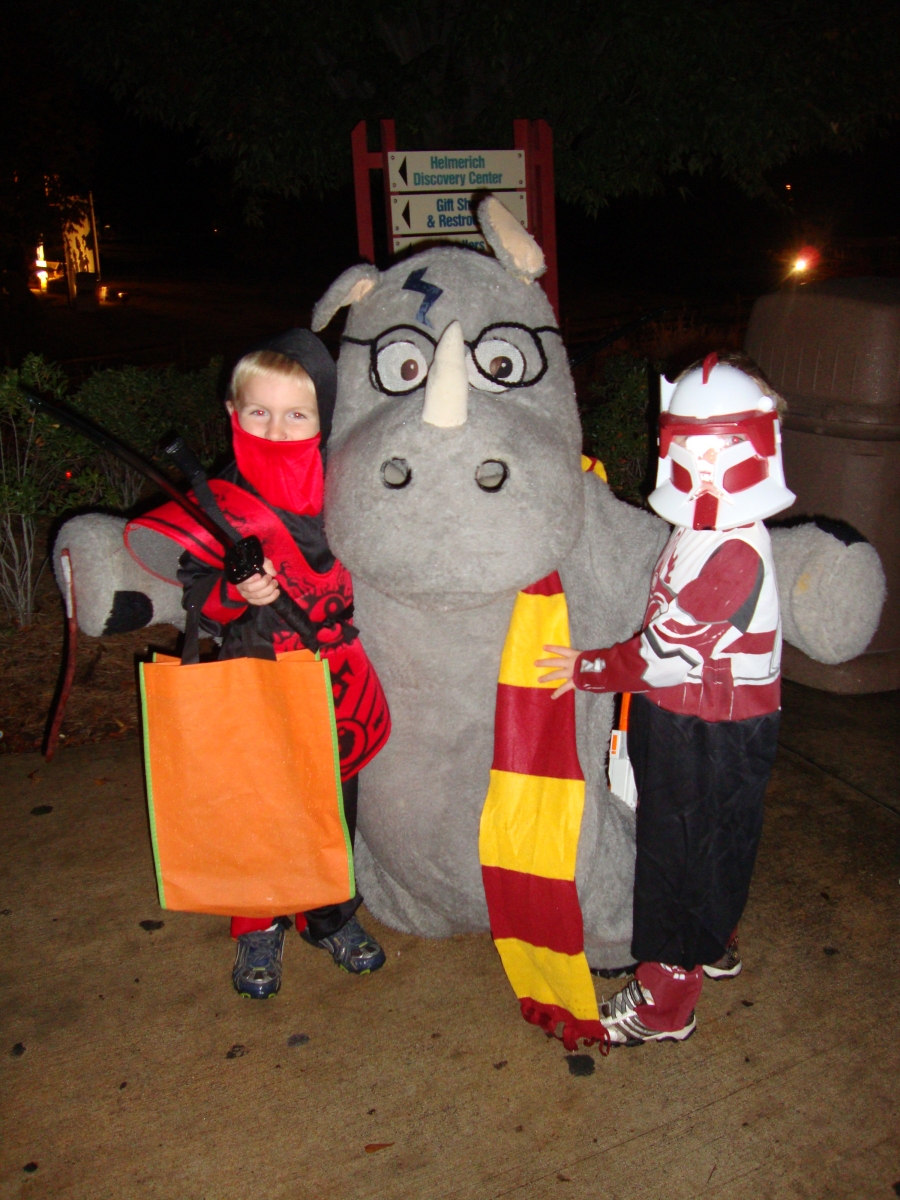 What little boy, or little girl for that matter, isn’t fascinated by pirate ships? This is just one of the pirate ships all decorated for the kids to climb on board and find treasure (aka candy)! 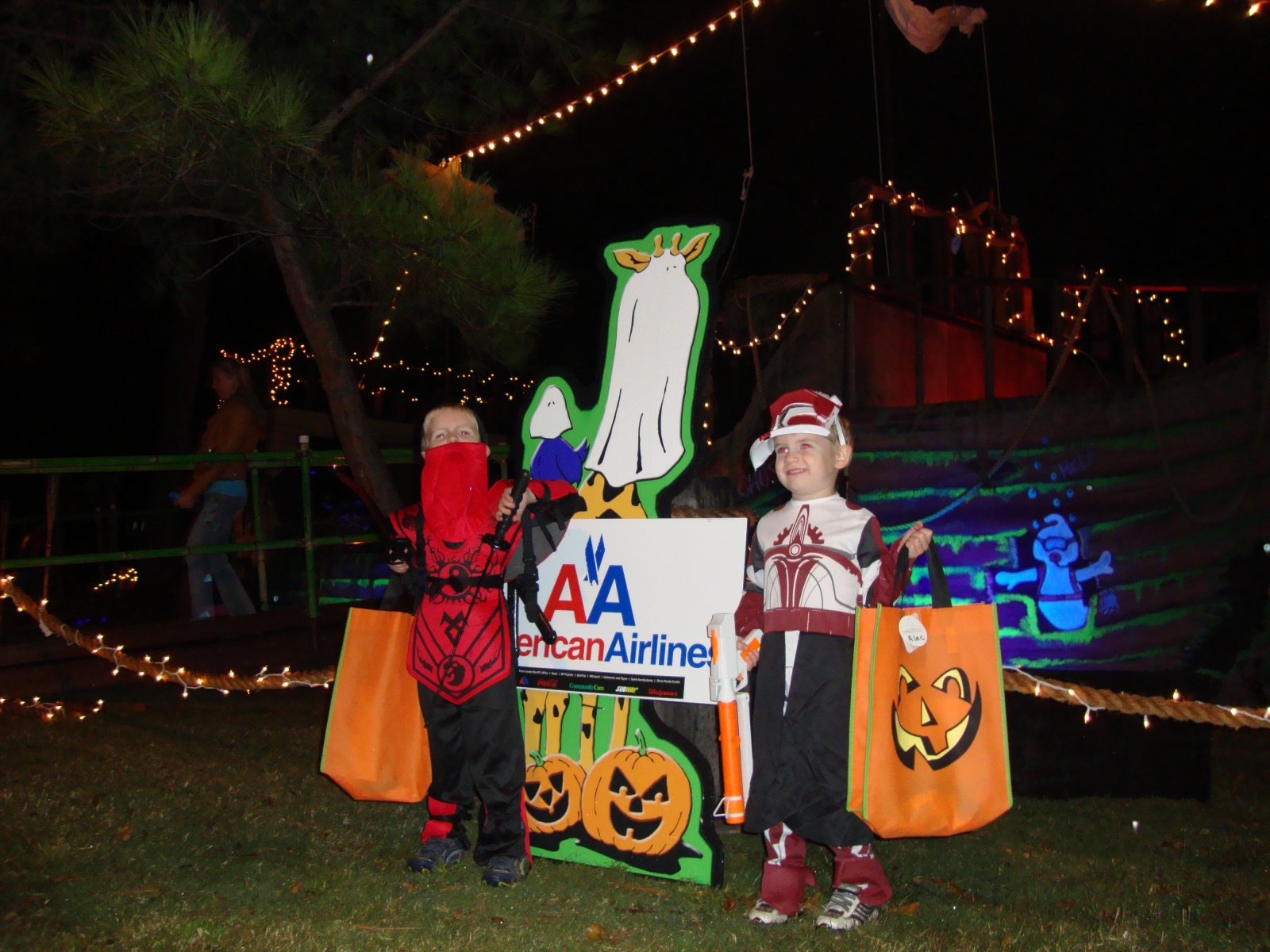 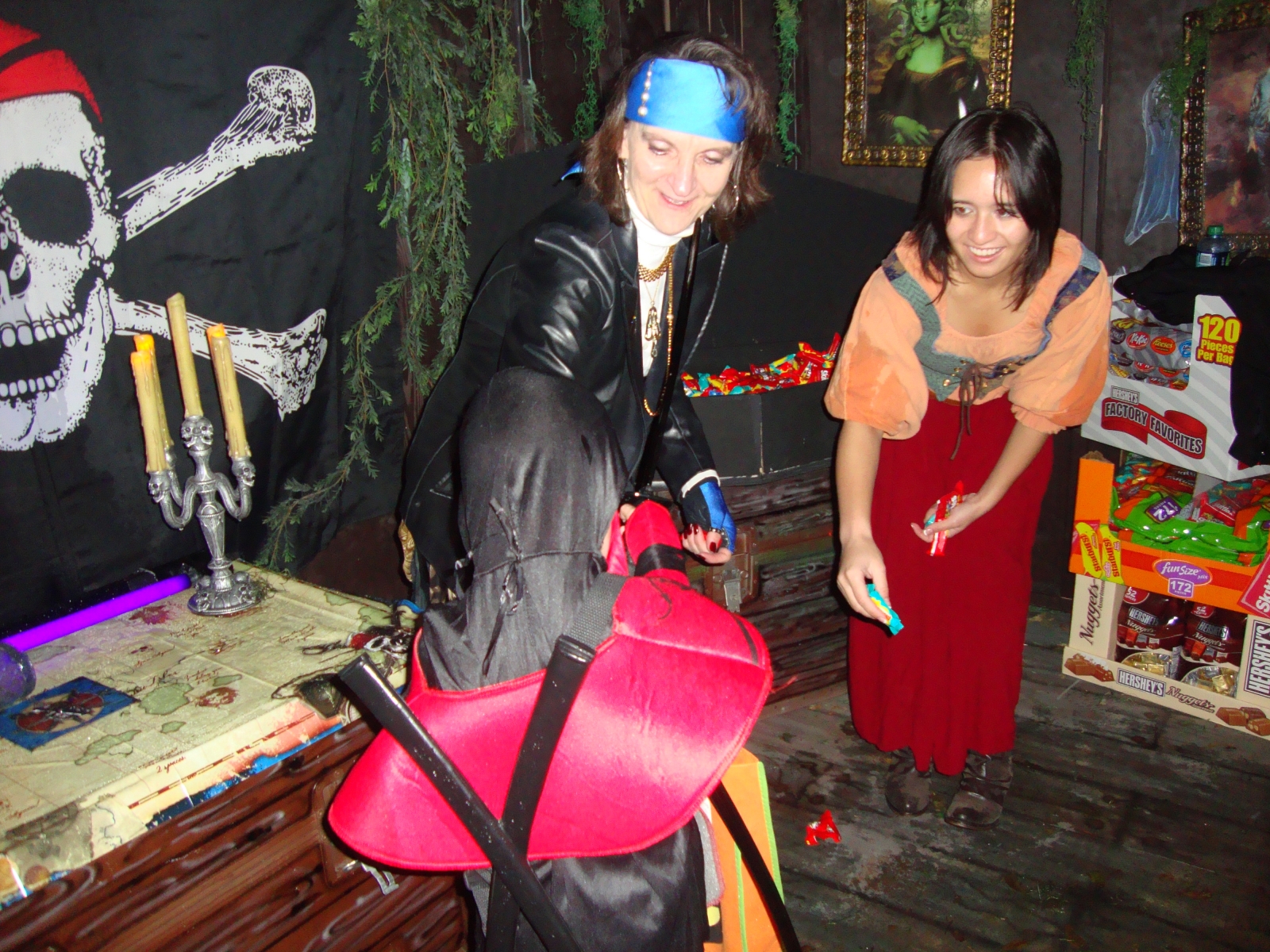 Along the path throughout the Zoo, there were “Goblin Stops” hosted by various local businesses where the kids could trick or treat, play games, and learn about different opportunities in town. Here, Aidan had the opportunity to show off his ninja skills with a local karate instructor who was teaching the kids to kick and break boards. Take note of the “Karate Kid” crane pose in the middle picture. Classic! I think we might try karate or another form of martial arts for this little guy next year; he really liked it! 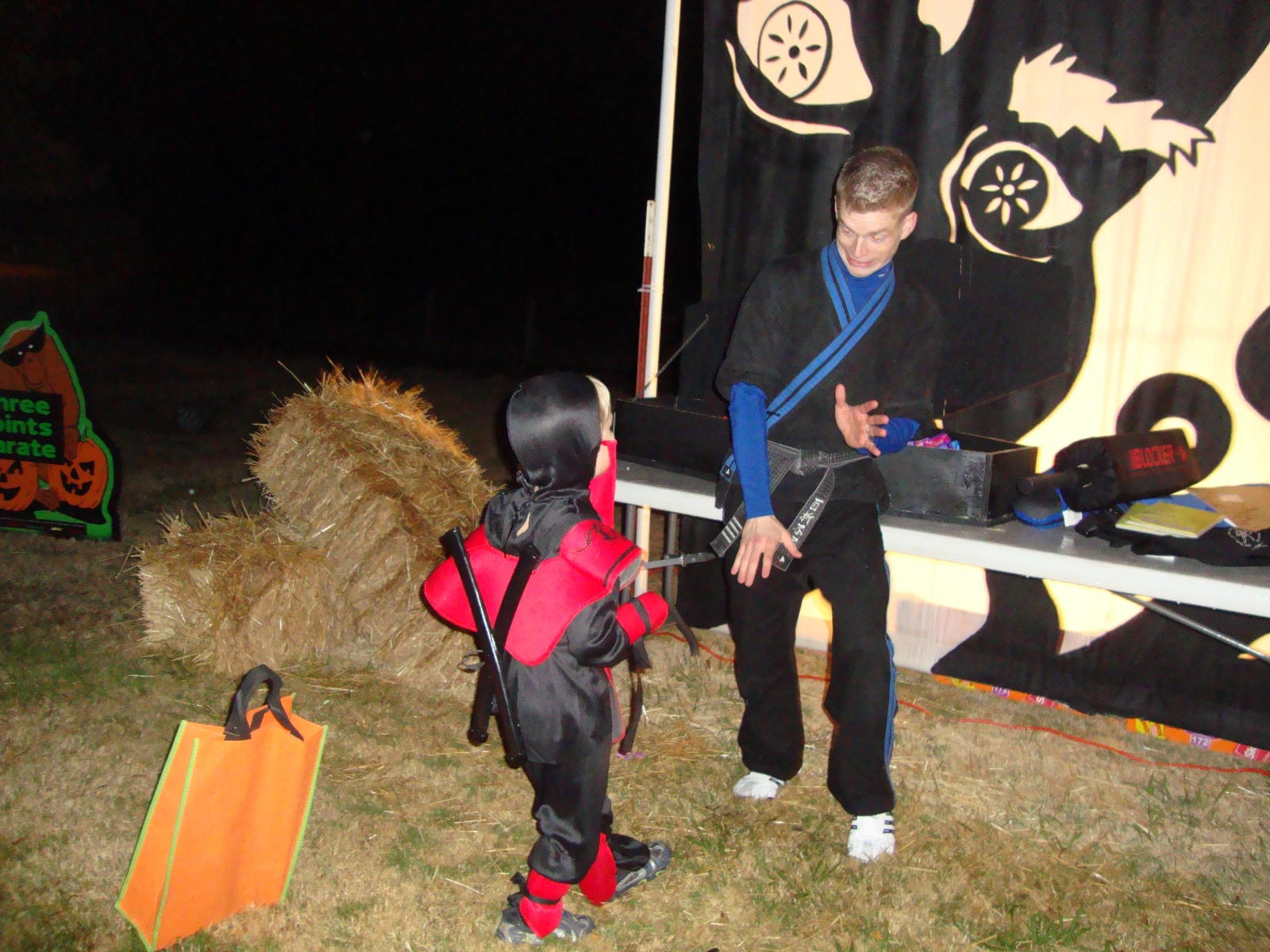 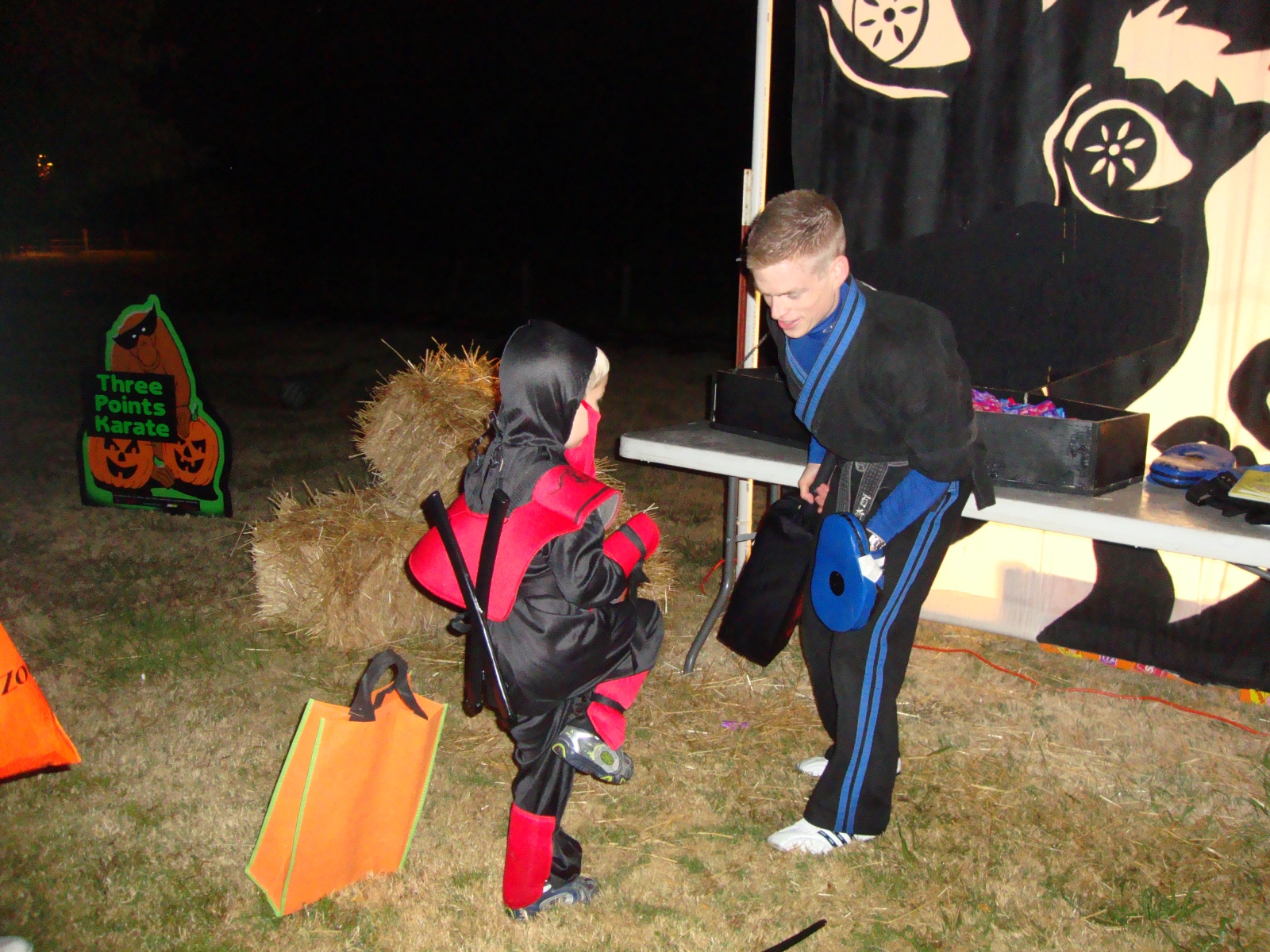 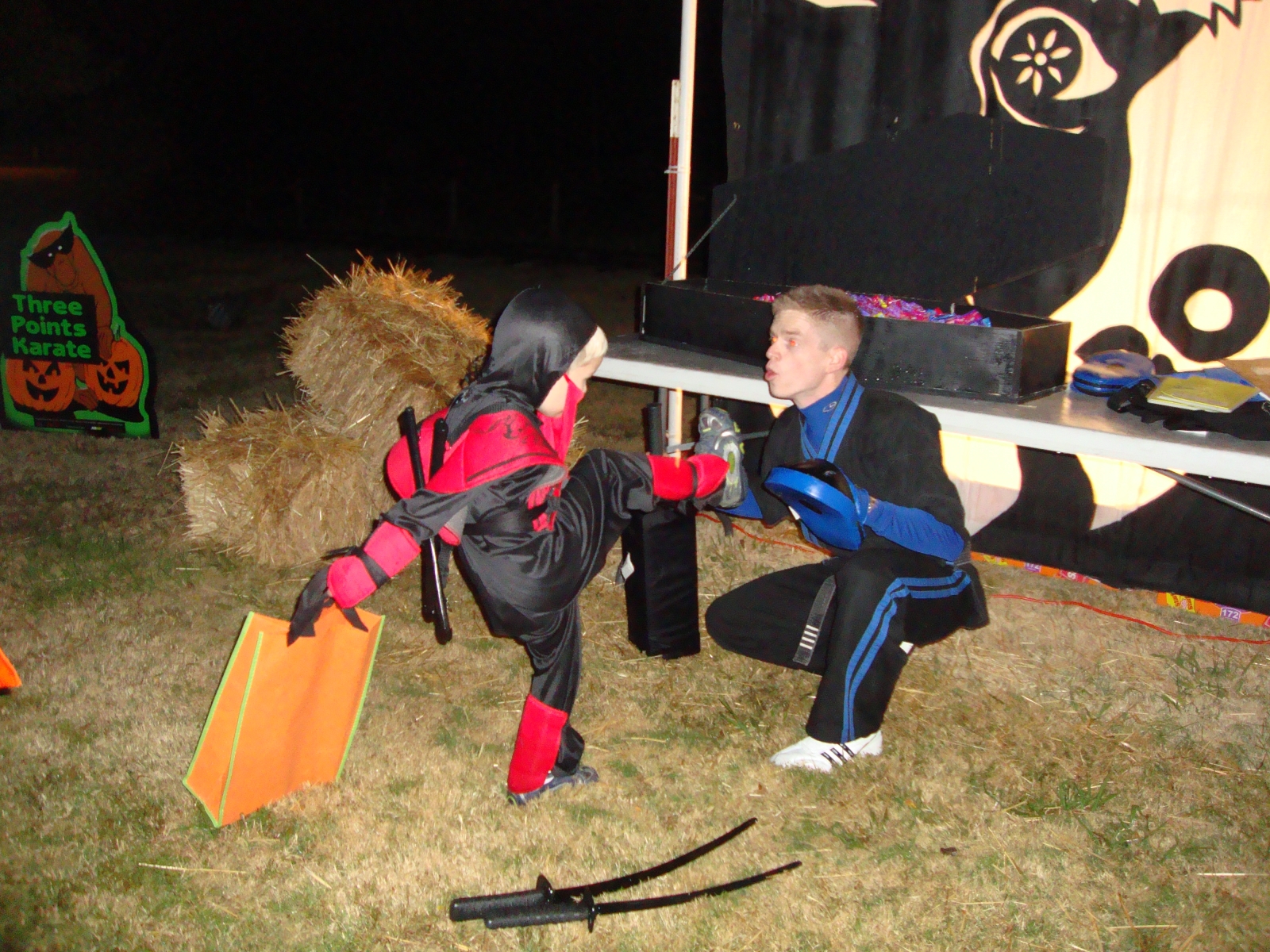 What was fun about being at the Zoo at night was that it was just spooky enough to be at the Zoo in the dark, and to think about all the animals that might be lurking behind shadows, but we never felt scared (kids included). Isn’t it interesting how a non-threatening place can feel spooky just by turning out the lights? We followed the path all the way to the “Royal Castle,” got to dress up like knights and kings, take pictures with princesses, and got lots more candy!

I think the highlight of the evening, second to candy of course, was riding the “Cross eyed Carousel.” My littlest loves carousels (merry-go-rounds as he calls them) so much he even made sure to list that on our Summer To-Do List! If you’ve never ridden a carousel at night with the spooky lights, you must give it a try! Tickets were only a dollar, which made the deal that much sweeter. The theme to Ghost Busters played as we went round and round and it was entertaining to no end to see my boys bobbing their heads and trying to learn the words. I think I know what movie we’re going to have to rent soon! 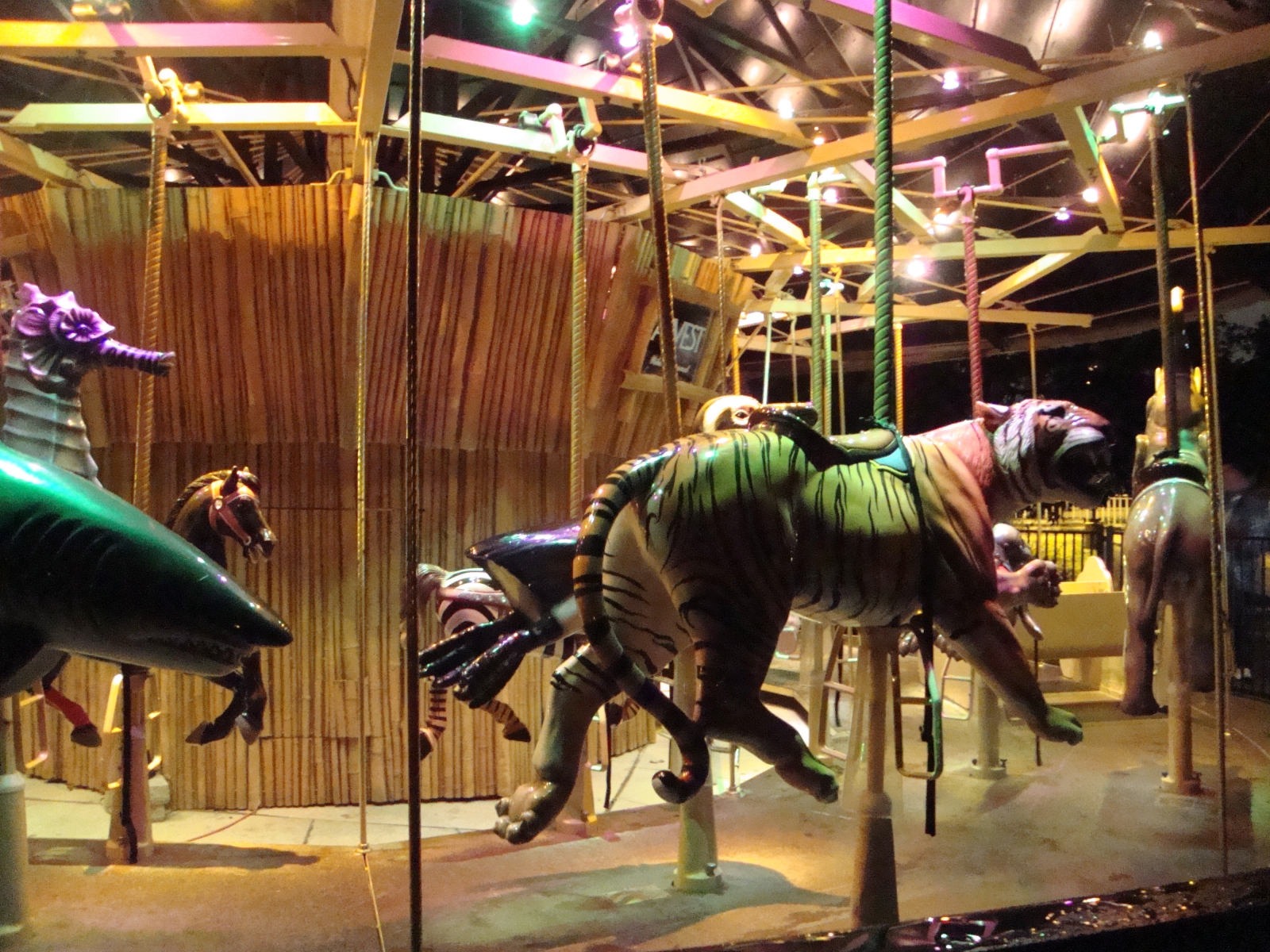 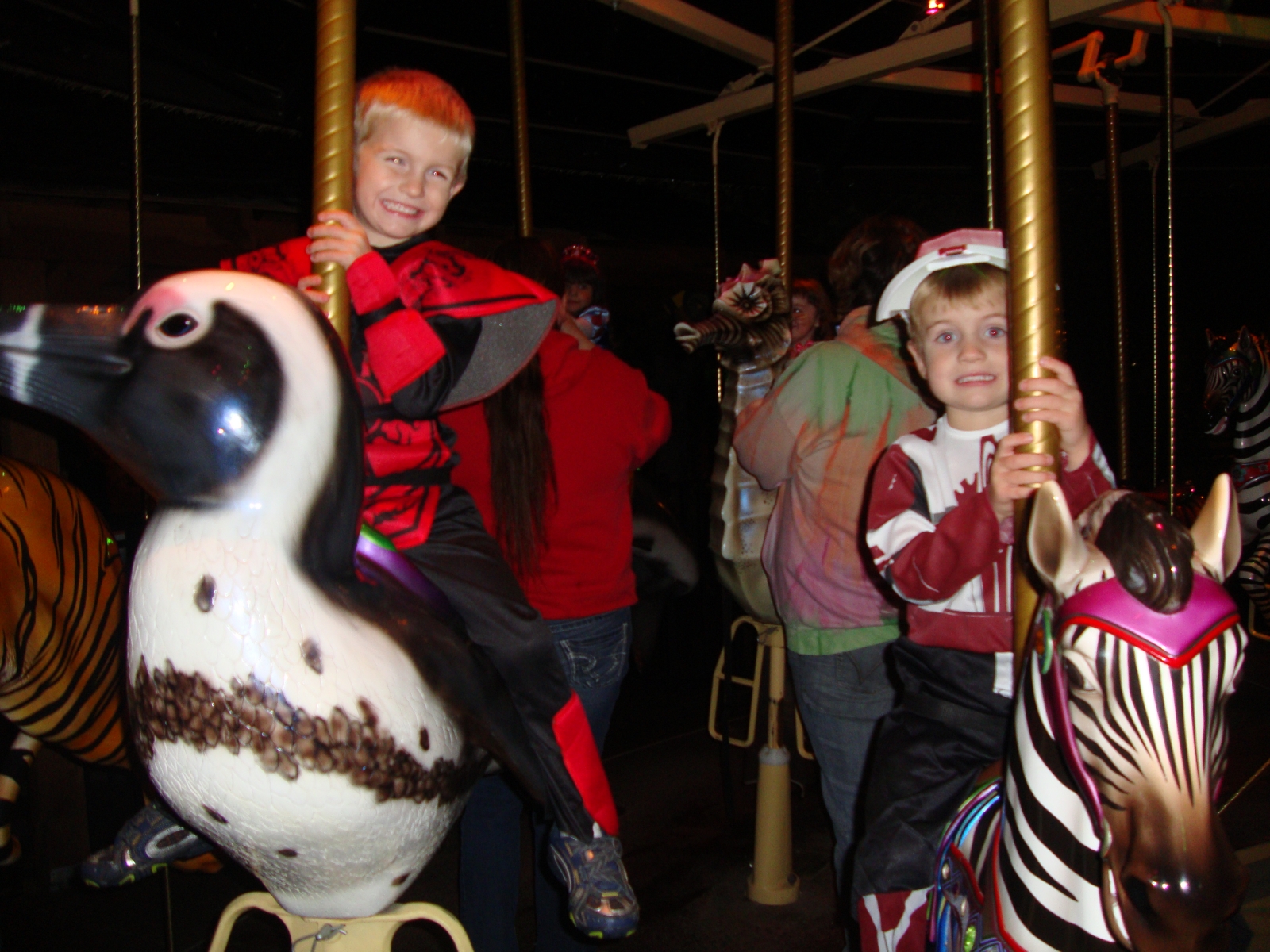 Lastly, I have to share this very sweet mom moment. While on the carousel, Aidan made a little friend. They were on horses near each other and got into a conversation about how cool Aidan’s ninja swords were. Aidan wanted to make sure his friend got a chance to see and play with his swords and may have even offered to give them to him!

As we walked out of the park, Aidan noticed the other little boy a few steps ahead of him. Aidan began walking faster and got up to a little bit of a trot just to catch up to the boy. He shouted, “Hey, um…(realizing he didn’t know the little boy’s name)…hey You! Do you want to um, be new friends? Next time when we come I could bring all my swords and we could play swords together, and maybe next time we could do the train ride!”

I fought back tears, seriously. What a sweet and kind moment of my son being brave enough to reach out and make new friends, hoping and believing in the kindness of others. This is a quality in him that is beautiful, and I sure hope he never loses it! 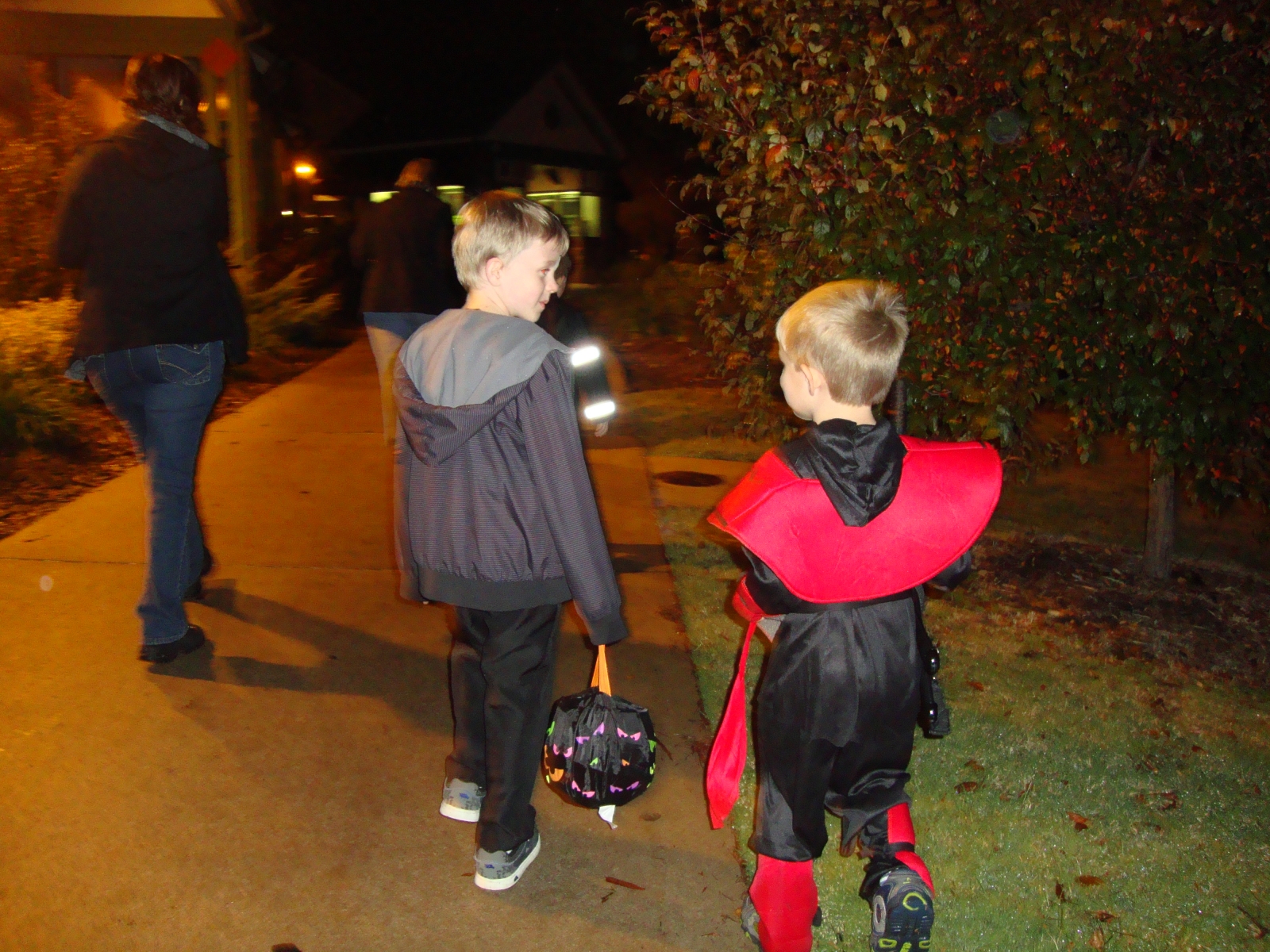 We had a blast at HallowZOOeen, and I hope we’re able to take all four kids next year. I hope you’ll join us!

Stay tuned for my review of HallowMarine at the Aquarium!