It had been one of “those” days in our house. Every time I turned around my then 3-year-old son was getting in to something, climbing on the outside railing of the stairs, spilling milk all over the floor, teasing the cat. Despite my scolding, it wasn’t ending. Right after telling him to leave the cat alone for the fourth time, I walked in to the other room just in time to hear a crash. Sprinting to the living room, I saw that he had pushed a toy dump truck carrying all of his hot wheels down the stairs. My newly cleaned living room now resembled a horrific crash scene with toy car causalities everywhere. That was the last straw — TIME-OUT!

That’s right, I’m a time-out parent. Now this doesn’t mean that I don’t use other forms of discipline too, but on this day…we both needed a time-out. However, as he was crying in the corner, I couldn’t help but feel like this wasn’t working. Interestingly, child psychology experts agree. While time-outs certainly sound like a brilliant fix, most parents often admit that they simply don’t work. But, according to a recent study from Oregon Health and Science University in Portland, 85 percent of parents who use the time-out strategy make mistakes that can reduce its success.

Using Them Too Often

Research from Oklahoma State University in Stillwater has found that time-outs work best on young children who are defiant or intentionally doing the opposite of what you ask, but only if you first try milder responses like talking it out and warnings. Too many time-outs make them not as meaningful.

A time-out is a consequence. Young kids crave attention, and even negative attention may be good enough. So a time-out should really be a short lack of parental attention that lets a child see that his behavior led to losing attention instead of getting it.

Using Them for the Wrong Reason

Despite popular belief, time-outs aren’t supposed to be about getting children to think through their misdeeds. The American Academy of Pediatrics (AAP) explains that a time-out is primarily a ‘Let’s stop things from getting worse’ strategy, a cooling off period.

If your child does end up needing a time-out, experts say there are new and improved time-out techniques that make a difference.

Step 1: Give a clear warning. Studies have found that a single non-repetitive warning before every time-out can reduce the number of time-outs needed by 74 percent.

Step 2: Announce a time-out. You might wait until your child is relatively calm, but briefly reiterate what he did wrong (“No hitting. Time-out.”), and escort him to a naughty chair.

Step 3: Start the clock. Recent research shows that even brief time-outs of one to three minutes are effective, especially for children ages 3 to 5.

Step 4: Make it boring. During the time-out, do not talk to your child or make eye contact. Your lack of attention is the consequence for your child’s negative behavior.

Step 5: Move on. It doesn’t matter if your child is still fidgety, sassy or crying. Once the timer goes off, the time-out is over.

After a time-out, the AAP says it’s good to have a quick chat with your child. Ask if she understands why you gave her a time-out. Allow her to express her feelings, and then, very briefly, remind her that time-outs happen only when she breaks a rule or needs help to tone things down. Praise her for completing the time-out, and then go on with life. Your child now has a clean slate to show off her newly improved behavior! 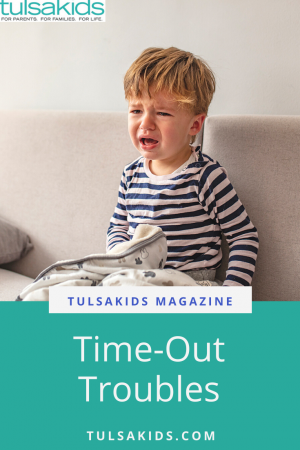 Finding Flowers in the Weeds: My Personal Journey through Miscarriage