Eggs are a staple in the Rittler household, but every now and then it's fun to 'think outside the shell' and try something new!

When I worked in the kitchen at a coffee house many years ago, I learned this: People are picky about their eggs! Blessings if you’ve ever been asked to prepare an egg over-medium and left it on the pan just a few seconds too long. Thankfully, the experience (which included a customer barging into the kitchen and shaking fried eggs in our faces) didn’t completely turn me off from eggs, and I still enjoy eating them.

But if you’re someone who considers themselves a scrambled-only or an over-easy-solely person, why not consider breaking out of your shell and trying something new? These three recipes may not be the most time-efficient when it comes to eating eggs, but they are all easy, delicious and definitely not boring.

If you find yourself with cartons of leftover Easter eggs later this month, consider making Creamed Eggs on Toast. This recipe is adapted from the one found here. 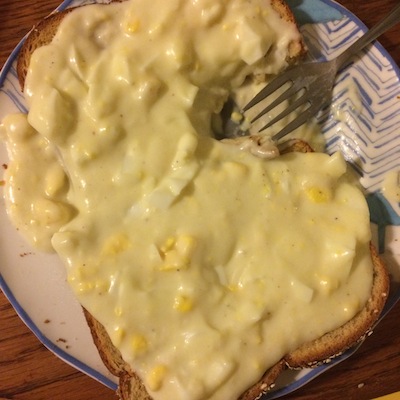 Melt butter in small saucepan. Once melted, whisk in the flour. Then, slowly whisk in the milk. Add salt, white pepper and nutmeg and continue whisking until mixture is thick and bubbly. Remove from heat, then add chopped eggs.

Just because Cloud Eggs (or Egg Nests) became an Instagram fad and they’re light and fluffy doesn’t mean these can’t be a substantial addition to your egg repertoire! Based off the recipe found here. 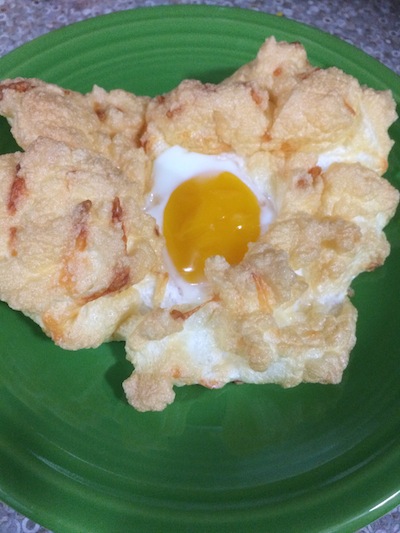 Preheat oven to 450 degrees and line a baking sheet with parchment paper.

Separate the eggs, being careful not to break the yolks.

In electric mixer, beat the egg whites and two pinches of salt until stiff peaks form. Very gently, fold in the grated cheese.

Use the whites mixture to create four mounds of equal volume on the baking sheet, then shape the mounds so that they are roughly nest-shaped (higher on edges than in the middle). Bake for 3 minutes, then remove from oven.

Carefully add one egg yolk to the center of each “nest.” Bake three more minutes. The whites of the eggs should be lightly browned.

I was nervous that Scotch Eggs would prove more complicated than I would like. Originally, I was thinking about making this recipe from Bon Appetit, which is probably excellent; however, this recipe from All Recipes UK simplifies the Bon Appetit one by at least two steps: 1) You just roll the scotch eggs in bread crumbs, rather than crushed corn flakes and flour, and 2) They are baked, not fried. Nothing against fried foods, but I try to avoid deep frying at home, especially around small children! 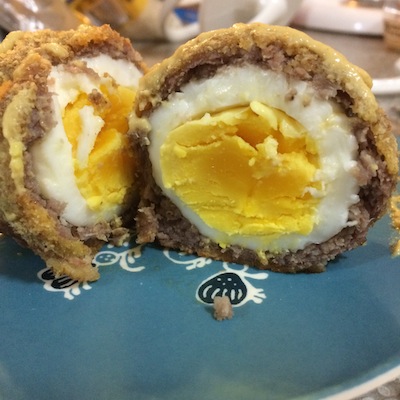 Soft-boil eggs by placing them in a saucepan, covering with water (if you add a capful of vinegar, the shells should remove easier!), and bringing to a boil on stovetop. Once the water reaches a boil, cover and turn off heat. Rest five minutes (this is what I did; the Bon Appetit recipe said 3 minutes, but I’m not used to soft boiling so was worried they wouldn’t be done!), then run under cold water until the eggs are cool enough to handle. Remove the shells. (This step can be done ahead–and again, if you have hard-boiled eggs left over from Easter, there’s no reason not to use those!)

Divide sausage into six equal portions. On a lightly-breadcrumbed surface, pat out the sausage until it is about 1/8″ thick. Pick up one sausage circle and wrap it around one egg, pinching the open ends together and making sure the egg is well covered. Dip sausage-encased egg into the beaten egg, and roll in the breadcrumbs. Place on lined baking sheet. 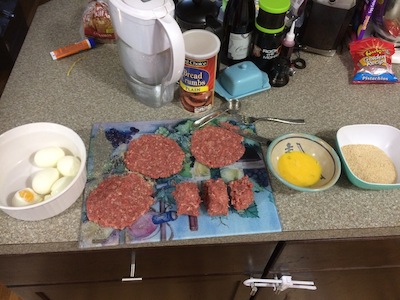 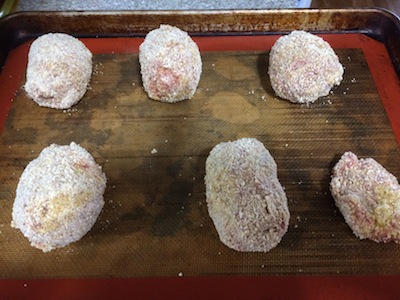 Ready to go into the oven

Bake for 30 minutes, or until done. (I started at 25 minutes, then added an additional 8 minutes because I am paranoid about undercooking meat.) 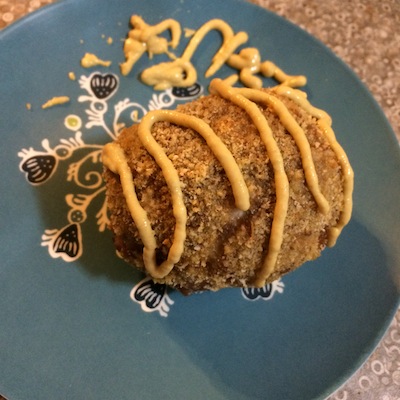