This concept isn’t new; the idea of the “three-gift Christmas” in various formations has been circulating for a time. It almost seems the antithesis of the concept of good grandparenting. Isn’t the stereotypical ideal grandparent supposed to spoil the grandchildren with a veritable deluge of gifts on Christmas? I may get my grandmother card revoked by my readers, but I’m embracing the idea of the “three-gift Christmas” for my grandchild! 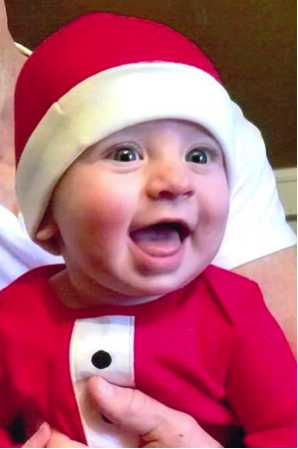 My grandson Callister dressed in his Christmas pajamas last year. I know he will resist the hat this year but at least I got one adorable photo!

There are various reasons cited for this idea, religion being a dominant influence. Those who are doing it for religious motives choose three as the number in respect to the gifts the three wisemen brought Jesus at his birth: gold, frankincense and myrrh. In this scenario, gold represents something the recipient desires, something of value to them. For a child, this would most likely translate to a toy they have been wanting. Since Frankincense was burned in the temple as part of worship, the gift representing Frankincense is something to help the recipient in their spiritual walk such as a Bible, a praise and worship CD, a nativity set or a journal. Myrrh was a medicinal term during the day of Jesus so the gift given for myrrh is typically for the body. This is open to interpretation and could be anything from mittens and underwear to a bicycle or other fitness-oriented equipment. Families that use the three-gift rule on Christmas for religious reasons cite the desire to focus on the true meaning of Christmas.

Other people might name finances as a motivating factor. It is estimated that people spend an average of almost 800 dollars on gifts during the holidays, and many are going into debt to do that! This creates a level of stress that is unnecessary and an unpleasant way to begin the new year. Limiting to three gifts is a good way to control the hemorrhage of cash, especially for those grandparents that have many grandchildren! In fact, those three gifts could consist of experiences instead of monetary items. A gift of a day spent with grandparents is a present of great value in our busy world.

I admit shopping is not my favorite activity, but my main motivation to begin the tradition of a three-gift Christmas with my grandchildren is to have less focus on accumulating material objects. As a mother, I remember feeling overwhelmed with the sheer volume of toys my children possessed. I can’t blame their grandparents, none of them were big gift givers, so all I can attribute the Mt. Everest mound of toys to is my daughters having divorced parents. Maybe we overdid the gifts in an effort to ease our guilt, or maybe we got carried away with buying our kids all the “stuff” we didn’t have in our own childhoods. In the beginning my ex-husband and I coordinated our gift-giving, but somewhere along the way we began buying them way too many gifts, and the den at our house began to resemble a Toys R Us showroom, although not as organized. Imagine what the shelves might look like after a pack of wild raccoons had a party, and you’ll get a clear picture of our den. My daughter wisely wants to avoid that situation with her children, and I completely understand and respect her views. It’s easier to appreciate what you have when there is a less of it, and fewer toys makes for a cleaner house

My secular take on the three gift Christmas is mind, body and soul and, if you promise not to leak Santa’s secrets to my grandson, I’ll tell you how that plays out in terms of gifts.

Mind – Books are the obvious choice!  The love of reading is a fantastic gift, and books are the physical manifestation to nourish that love! Callister will be receiving a couple of carefully chosen books to add to his growing library! Part of this is selfish; one of my favorite things in the world is when he brings me a book, climbs in my lap and snuggles in for a good read!

Body– My grandson will be 18 months during this Christmas season and like most toddlers, he is full of physical energy. To help burn off some of that energy on days that it’s too cold to go outside, I’m getting him a toddler’s first trampoline. It sounds a little dangerous, but it has a bar to hold onto, will be placed where there is a soft place to land, and he’ll always have adult supervision when he uses it.

Spirit– At library playtime, his favorite activity is playing in the toy kitchen. I think it’s every toddler’s favorite, as that seems to be the site of the most squabbles. He loves to play with the pretend food, taking it from the pantry and putting it in the oven. I bought him a plastic Little Tikes version with no sharp edges and plenty of pretend food. We’ll see if it’s as desirable when the competition is removed.

Whatever you decide, make sure you check with the parents of your grandchildren and receive their input and approval. It’s important to respect their ideas and boundaries about gifts for their children. When my grandchild is older, probably three of four, I will add a fourth gift to this list – giving to others. Teaching generosity is vital to building character, and what better time to begin a new tradition of giving? 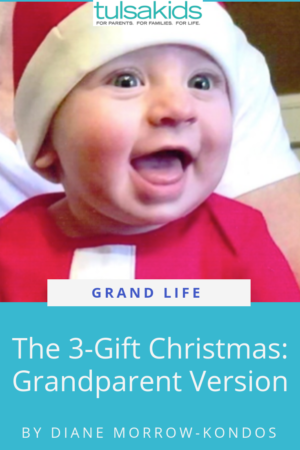