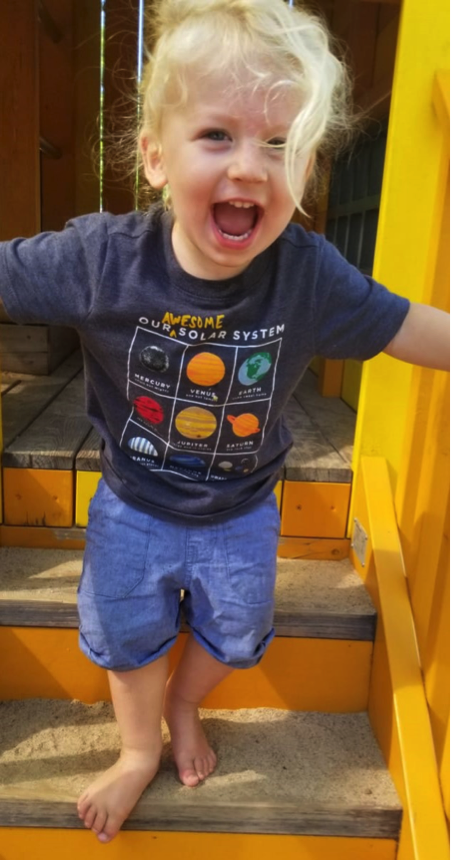 He’s excited about being two!

Last weekend we celebrated Callister’s second birthday. This means no more counting in months; he is two years old. Two marks the official end of him being a baby; he’s now a full-fledged toddler. Some people may grieve the end of the baby stage, but I think it’s getting more fun all the time. I am ready for the terrific twos!!

We’re at the beginning of two, but I’ve decided I want to forego the “terrible twos” label and refer to it as the “terrific twos” for a couple of reasons. I believe in the power of self-fulfilling prophecy, and I want to reframe this stage as positive instead of negative. In fact, much of the behavior that led to the creation of the phrase “terrible twos” is actually very age-appropriate behavior. Understanding the whys behind some of their more difficult behaviors during this stage may help us be more forgiving as we help them maneuver their way through their third year of life. There may be some behaviors typical of two-year olds we don’t love, but remembering our little ones aren’t yet developmentally able to control much of the behavior helps us be more patient with them. They are still new to this world, learning the language and the customs of this strange planet. They need our gentle guidance and leadership, not unrealistic expectations and harsh punishments.

In addition to re-labeling the terrible twos into the terrific twos, I also have a few other appropriate alliterative phrases for this stage.

When we take our grandson out to a restaurant, we do our best to make sure we don’t leave too big of a mess, but we also pay what we call the “toddler tax,” which translates to a bigger-than-normal tip for the waitstaff. We know they’ve earned it, and we want to be able to go back to our favorite restaurants without looks of dread shooting in our direction.

Is a spoon really necessary for ice cream?

After Callister has spent an afternoon at our house, it looks like a tornado has hit, and I guess it has in the form of a two-year-old dynamo. We have those dangerous Legos all over the tv room, books strewn about the reading nook, and dinosaurs and trucks have taken over almost every room. One of the changes two is going to bring is a new clean-up game at the end of our play sessions. 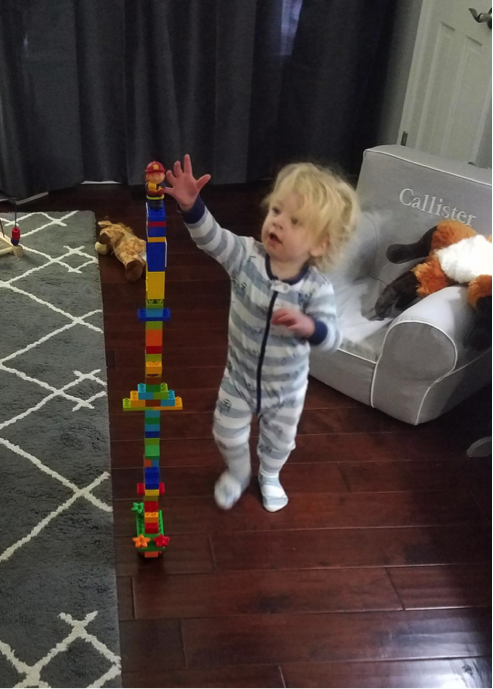 I bet you can guess what happened right after this picture was taken.

Our grandson is a talker! He babbles on and on and as time goes on, I am able to decipher more and more of his newly developing language. It helps to know his favorite subjects: dinosaurs, trucks and animals. The closer he got to turning two, the more I noticed an explosion in his vocabulary, and now it’s full-on discussions! By the end of this year, he should be able to understand almost all of what he hears, so it’s time to be careful. We’ve already had a few “oops” of him repeating less-than-desirable words. 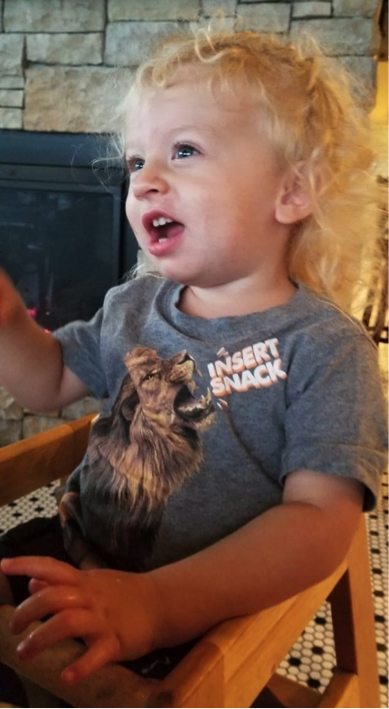 He was telling us a story and although I’m not positive, I’m pretty sure it involved dinosaurs, trucks and a cat.

Our grandson is unaware that my husband and I play a game called tag team on the occasions we have him for a long stretch, such as our monthly overnights. We usually have some type of adventure as a complete unit, such as going to the park or the zoo, and then upon returning home we take turns. This is the best solution to help with the next issue.

No, the toddler rarely gets tired, but he is the cause of the grandparents needing some serious couch time after a visit. It’s a special kind of tired, one that requires its own title and a bone-weary exhaustion unbeknownst to us before. How does a two-year-old have the power to completely deplete two fairly fit grandparents? 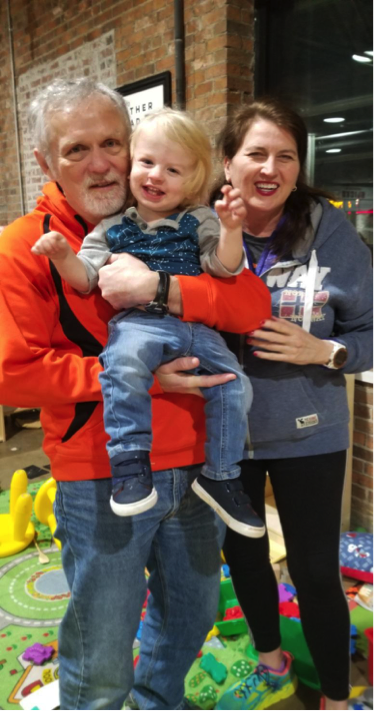 One of our adventures with Callister, Gathering Place and Mother Road Market, and then we collapsed.

There will be some tears, and maybe even some that will escalate into toddler tantrums during this year, but I plan to keep in mind that these tears are based in frustration as the little ones attempt to learn how to navigate their way through the world. Patience is a much-needed virtue, and the art of diversion is a great tactic! It also helps to know the parents will eventually be coming to take him home!

No our grandson isn’t having nightmares, we are!! This is something they didn’t warn us about in the grandparenting class we took before we became grandparents. I’ve always had a problem with an overactive imagination, but since Callister was born, my husband and I have both been plagued with nightmares about his safety. These are not grounded in any reality, they are because we adore him so much that the thought of anything happening to him has creeped into our subconscious, erupting into scary movies in our dreams.

My grandchild is being raised by health-conscious vegetarians, so don’t judge me too harshly when I tell you at my house, he is allowed to have some treats. One of his favorites is something now known in our house as “stir- stir,” a term he invented before he could say chocolate milk. He has a little “stir- stir” jig and chant he does in front of the refrigerator and then he takes out the milk and Hershey’s syrup, and we make an exaggerated production out of him helping to pour the milk and chocolate syrup, stir-stir, taste and then drink. He may love the ritual more than the finished product. We also now stock some snacks we didn’t before, such as Goldfish and graham crackers, and I am reminded of why I gained weight when my kids were young.

I won’t ever be a grandmother who is known for her cooking but with Callister’s help, I can make a mean “stir-stir”!

We are now one week into the “terrific twos,” and I’m working on teaching Callister to respond to questions about his age with the words, “I’m two,” as he holds up two fingers. As of today, it’s only been successful twice, which seems fitting. I love each stage with my grandson, and I can’t imagine two is going to be anything less than terrific! I need a little more drama in my life, and a two-year-old grandson will surely provide! Happy Second birthday, Callister! 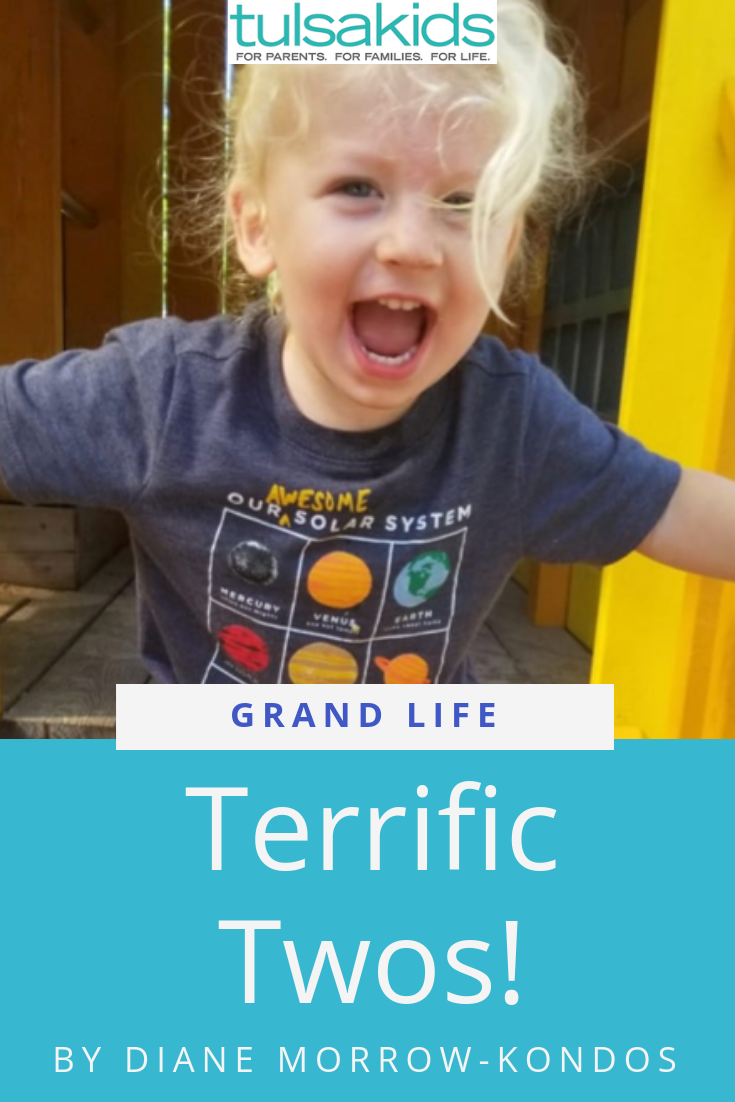