A Weekend at Cowboy Camp.

Worn boots kicked into the soft red dirt, an angry high sun beating down overhead. In the distance, a team of horses drank and played near the watering hole. Long gold ringlets tangled in sweat cascaded down the cowgirl’s back as she mounted Old Joe, swinging her leg effortlessly over his saddle, a prize won in a long-ago battle. She steeled herself; this was it. This would be the moment where she finally proved herself or failed against her formidable opponents.

She narrowed her wide blue eyes, taking the reins. “Come on, Joe,” she told the tired steed. The horse picked up his speed, hurrying around the barrels. She doubled back and crossed the finish line, victorious.

A blue ribbon would commemorate her victory, but the memory of cowboy camp was our cowgirl’s true prize.

We were invited by Jana Nunneley to spend a weekend in Caney, Kansas. I wasn’t sure what to expect from my kids when we arrived at The Ranch at J’s Corner Store. Sure, we used to live on ten acres in east Tulsa, and they spent loads of time by the campfire or exploring outdoors, but they’re also pretty bookish kids, and we haven’t spent a great deal of time outside the city since they were little. When I told them we were going to cowboy camp, I’m not sure they really knew what to think about it. But by the time we packed up our bags and drove the hour to the Oklahoma-Kansas border, they were excited to be getting out of town.

The first thing you notice as you pull up to The Ranch is the arena. But right next to it is the most fantastical handcrafted countrified play area I’ve ever seen. Constructed out of bits and pieces of discarded wood and corrugated metal is a little village–a bank, a sheriff’s office, a jail–for kids to crawl through and explore, even camp out in. It was like a magical creation of the Lost Boys from Neverland. I poked my head inside every one. 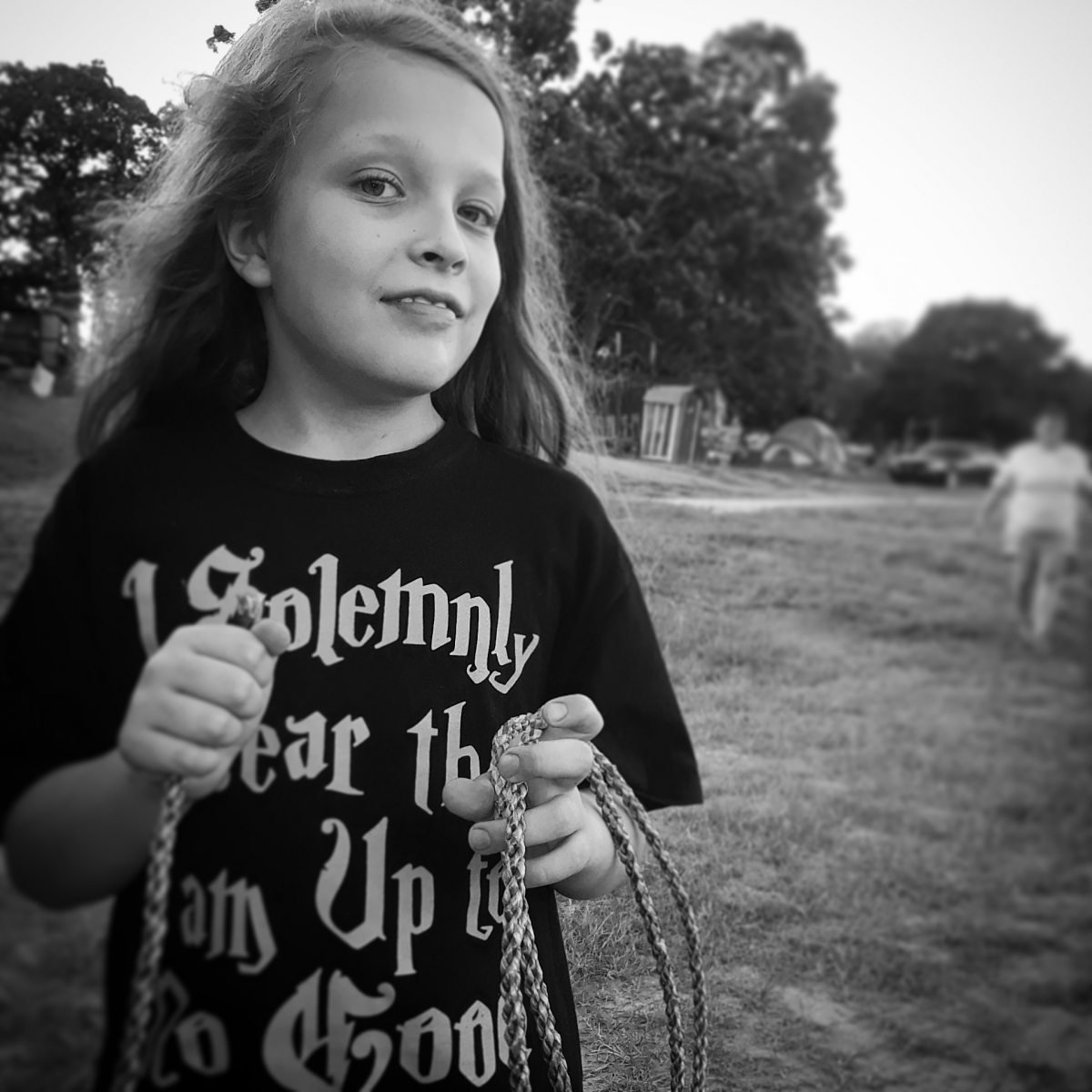 Tucked back in the corner was a private door and a solar shower heated up and ready to go. Next to it, a little boat sat waiting for pirates or sea captains to play. In the middle of the little buildings, a set of swings hung. I opened another door to find two pairs of quilt-covered bunk beds against opposite walls surrounded by a fantastical array of dress-up clothing. I watched my screen-addicted kids play on this freely and fantasized about creating my own version back at home.

Between playing, the kids explored all kinds of country whimsy for their imaginative minds to enjoy. They found a countrified DIY overhead sprinkler they could play under to keep cool. They each took a turn making rope with the help of a camp volunteer and sat down to try their hand at milking a wooden cow with plastic udders and water. This was the kind of good old-fashioned country fun my friend Tiffany would wax on about, and they were having a blast.

When we first arrived, Jana showed us around, and the kids made pals with other cowboy campers right away. Some of these kids have been coming down to the Ranch to get experience and time riding horses for the summer, and they were getting pretty good. I tried to recall my first experience on a horse, but those had been few and far between. I sat down on the bleachers next to the arena as Lucy jumped on after a quick word about how to ride. As small as she is at seven years old, she was offered the chance to ride a miniature horse instead of the big guy, but you all know Lucy.

I was surprised at how easily she swung her leg over Joe and hopped on for a little girl of her size. She looked very focused and serious. When each kid went out for the first time, an older, more experienced kid walked ahead of them to guide the horse and help the rider know how to ride. The goal was to get a feel for riding and learn the basics. By the time she dismounted, Lucy was grinning and pleased with herself. I never realized what a huge confidence builder horseback riding can be. 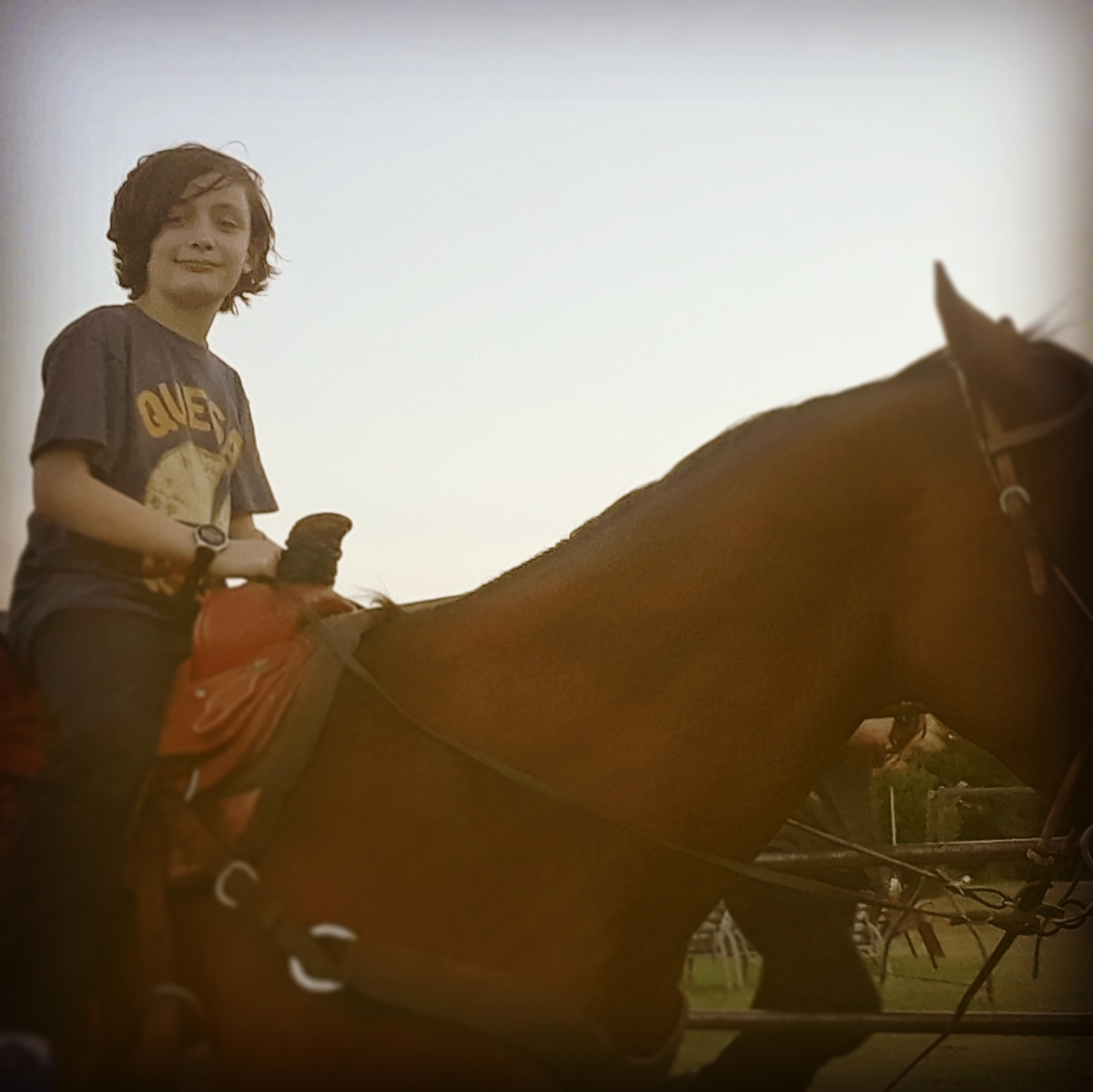 I knew Arthur would be fine. He loves animals deeply, as his pescatarian diet attests to, and he feels very connected with them. Arthur rode cautiously, taking in the experience with a near-reverence. But I worried about Noah because I wasn’t sure how he would respond to the sensory experience of riding a horse. As it turns out, he was a natural, quickly and fearlessly learning how to encourage Joe into a light trot.

After sundown, we lounged around outside the arena and chatted under the stars while the kids played in the dark in their little Kid Town. I had been writing content all week, and this was my first break in ages. I forgot what it was like to get lost in adult conversation. Jana showed us inside her barn, a treasure trove of beautiful and vintage delights. In one corner was a fantastically dreamy room literally brimming with princess dresses and magical, imaginative dress-up clothing, hats, gloves, and shoes of all sizes. I promised Lucy we would try to make it back to play in the dress-up corner someday soon, where Jana hosts teas and princess parties.

As we headed back to the arena, we passed the little area where Jana hosts weddings, a lovely little outdoor area with a faux-red barn for photography’s sake. I imagined this would be a fabulous place to host a dinner party. Later, we cooked marshmallows over little burners because it was too windy for a campfire. Jana took us to her horse trailer to bunk down for the night. When we settled in, it reminded me of the year we spent living in a fifth wheel trailer–a difficult time but a warm memory of everyone I love tucked away neatly nearby within hugging distance. The other families were camped out in tents near the arena.

I woke up to a beautiful sunrise and a horse grazing nearby, a small army of kittens milling about in front of our trailer. I took to Facebook to lament that I had forgotten coffee, and within minutes, Jana showed up at the door, a coffee in hand. After my family finally woke up, we headed down to the arena again. The kids spent the morning practicing and playing in turn, and then it was time for the big timed rodeo.

We piled onto the small bleachers next to the arena, a large umbrella overhead against the oppressive sun. Each kid was given a number for their back just like in the rodeo. Jana told me they want this to be close to the real experience so they can be ready if they do take their knowledge to the competitive arena. The kids each took a turn at the arena with Jana timing them, and then it was time for awards.

The kids were divided into three age categories, and every kid got an award of some kind. Lucy took home the blue ribbon for her speed, and Noah came in third. Arthur got an honorable mention ribbon, which he was happy just to have. After hot dogs (PBJs for my non-carnivorous kids), the kids played a while more, and then we headed over to Copan Lake for the afternoon. 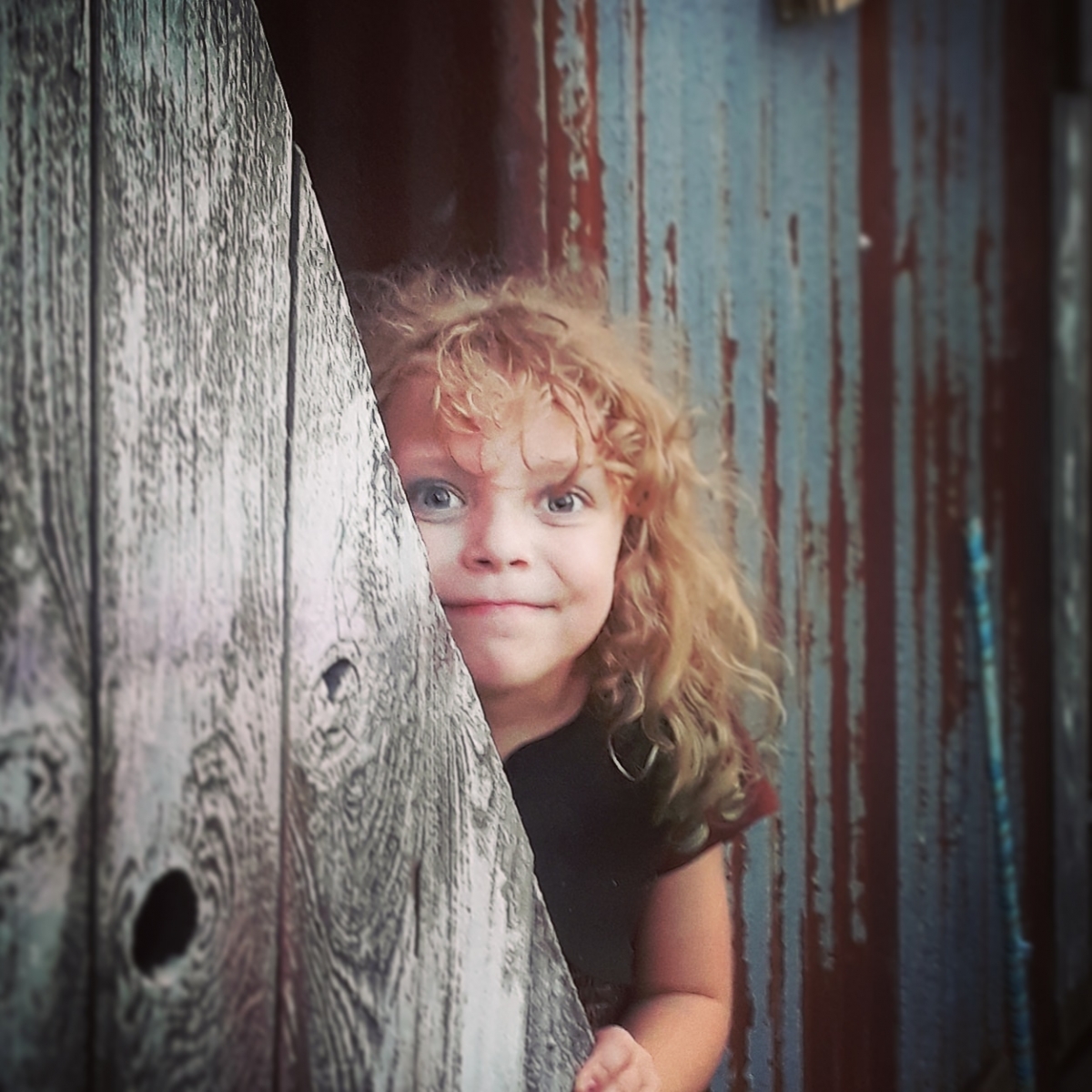 After a lazy afternoon playing in the lake, we headed back to the ranch hoping to ride again and visit with Jana, but thick clouds were starting to darken the sky. We said our goodbyes and rushed back home just ahead of the storm. We had an amazing time at cowboy camp for a bunch of city slickers, and we plan to visit again. It’s only a short hour from Tulsa, and at only $20 per kid and $20 per family to camp, it’s a pretty affordable and fun family getaway. I love the idea of my kids learning to ride horses, and they seemed to take to it pretty well. If you want to check out Cowboy Camp, the next event is August 10th.

Do your kids ride? If so, where? Do you know of any affordable places to practice riding for city slickers like us? If you do, hit me up in the comments, and as always, have a beautiful week and thanks for reading!